In most MMOs today it's common for characters to have a wide range of skills and to hold multiple professions. As going out and gaining experience and levels is often times the only way to raise your crafting professions, virtually every character is required to be some kind of an adventurer - whether they want to or not.

On the other end of the spectrum, as we discussed in the last design journal Contracts and Player-Created professions, the lack of trust inherent in MMOs forces players to become gatherers or crafters in order to get high-quality items. As a result, many modern MMOs require characters to be adventurers, gatherers, and crafters all at the same time.

While those ideas may work in MMOs where there's no time limit, in a world where your character ages and eventually dies, that isn't ideal. In the end, the limited life-span in Chronicles of Elyria means that more often than not, having a small set of specialized skills is better. Plus, it allows players to focus on the area they enjoy most, whether that be exploring, gathering, or crafting.

In part one of this two-part series on “Skills and the Skill System” we’re going to talk about how Chronicles of Elyria uses division of labor to allow players to focus on just the areas of the game they want to. After that we’ll talk about the different skill categories, how skill hierarchies work, and the multiple ways players can advance their skills. 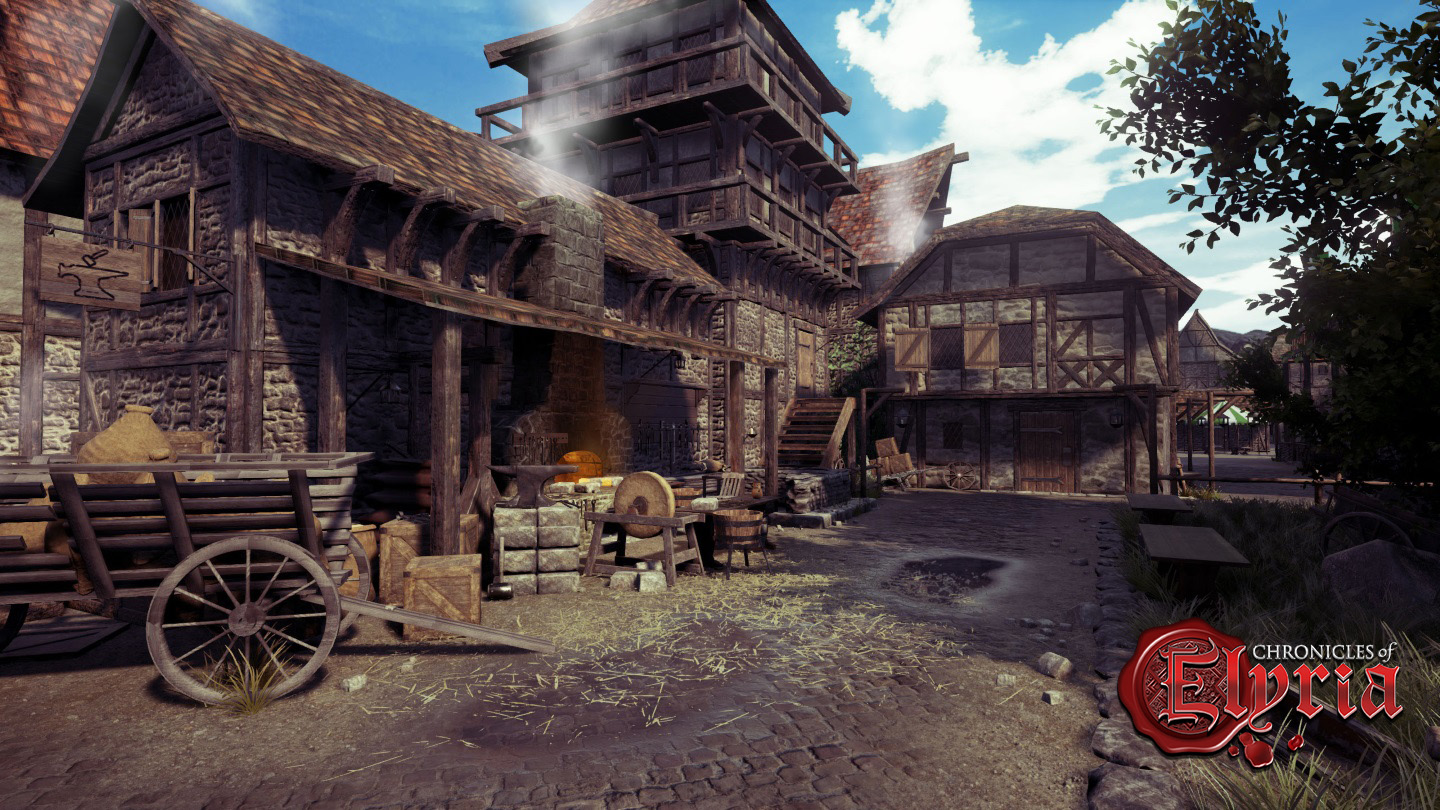 Figure 1 – In-game view of a forge and blacksmithing station

Different skill sets require different tools and equipment. For example, blacksmiths need access to a forge and appropriate tools for working with metal, clothing that won't catch on fire, gloves that prevent them from burning themselves, and a place to store materials before beginning production.

In contrast, merchants and miners will often need reliable transportation capable of carrying a lot of cargo or heavy loads. At the same time, travel by wagon is slow and incapable of maneuvering into narrow places amongst trees and brambles.

Finally, while blacksmiths, miners, and merchants all have skills in their specific trades, none of them have need to be expert swordsmen.

These observations lead us to the discovery that we really have four different roles in CoE which we call Character Roles. Character Roles are divided up into 4 categories. Producer, Supplier (Merchant & Gatherer), Explorer, and Champion.

The Producers are the crafters of the world. They're the blacksmiths, bakers, alchemists, and tailors. In general, Producers stay within the safety of a town and rely on suppliers to go outside and fetch the things they need. When they're not crafting they're selling their goods in a storefront or auction house.

Suppliers, which are further divided into Gatherers and Merchants, are those responsible for getting necessary resources to Producers. Between the two of Suppliers, Gatherers are your miners, lumberjacks, and farmers and tend to gather the more mundane resources. Meanwhile, Merchants travel long distances in order to requisition the more extraordinary or rare materials. In either cases, it’s not uncommon for both Merchants and Gatherers to use large wagons and keep bodyguards around.

Explorers are those who specialize in survival skills, allowing them to be out of town for long periods of time, roaming the badlands, braving forests, and wading through swamps. They're the treasure hunters of the world. Whether it’s an untapped mine, an unspoiled tomb, or a magical tree in the middle of an uncharted forest, Explorers make their living by knowing what's where, and charting the safest way to get there.

Champions are the bodyguards, sell-sword, soldiers, and dungeon-delvers of the world. When Explorers discover uncharted new territories, it is the Champion who proceeds forward and gives the all clear. When merchants makes their way along dangerous trade routes, it’s the Champion who keeps them safe.

As a player, your tolerance for risk and the types of activities you like to do will help you determine which Character Roles are suitable for you.

Skills in Chronicles of Elyria

While players may have different opinions about which skills makes up the best Champion, Explorer, etc., every character is made up of a combination of skills that span six top-level categories. In general, Champions will be made up predominantly of Combat skills, Explorers of Survival skills, Suppliers of Gathering Skills, and Producers of Crafting Skills, however the flexibility to customize is what makes CoE truly unique. The remaining two skill trees: Deviant and Bardic can be combined with any of the other four trees in order to create unique character personas.

The details of each skill tree is listed below.

Combat: Combat skills relates to a character’s ability to fight. This includes fighting unarmed, with 1H and 2H weapons, with thrown and ranged weapons, and utilizing additional tactics such as two-weapon fighting, and sneak attacks.

Survival: Survival skills relates to a character's ability to survive in the wilds. This skill tree is about finding food and water, tracking prey, bandaging wounds, and navigating your way through the wilds.

Crafting: Crafting skills relates to a character's ability to produce goods. These can range from consumables such as food and drinks, armors and weapons, furniture, and fine jewelry.

Bardic: Bardic skills are the skills of the academic and the performer. Whether it's performing music to embolden their allies, reading ancient languages, performing forensic analysis to track down a murder, or creating finely detailed maps, the bardic tree is about information and discovery. 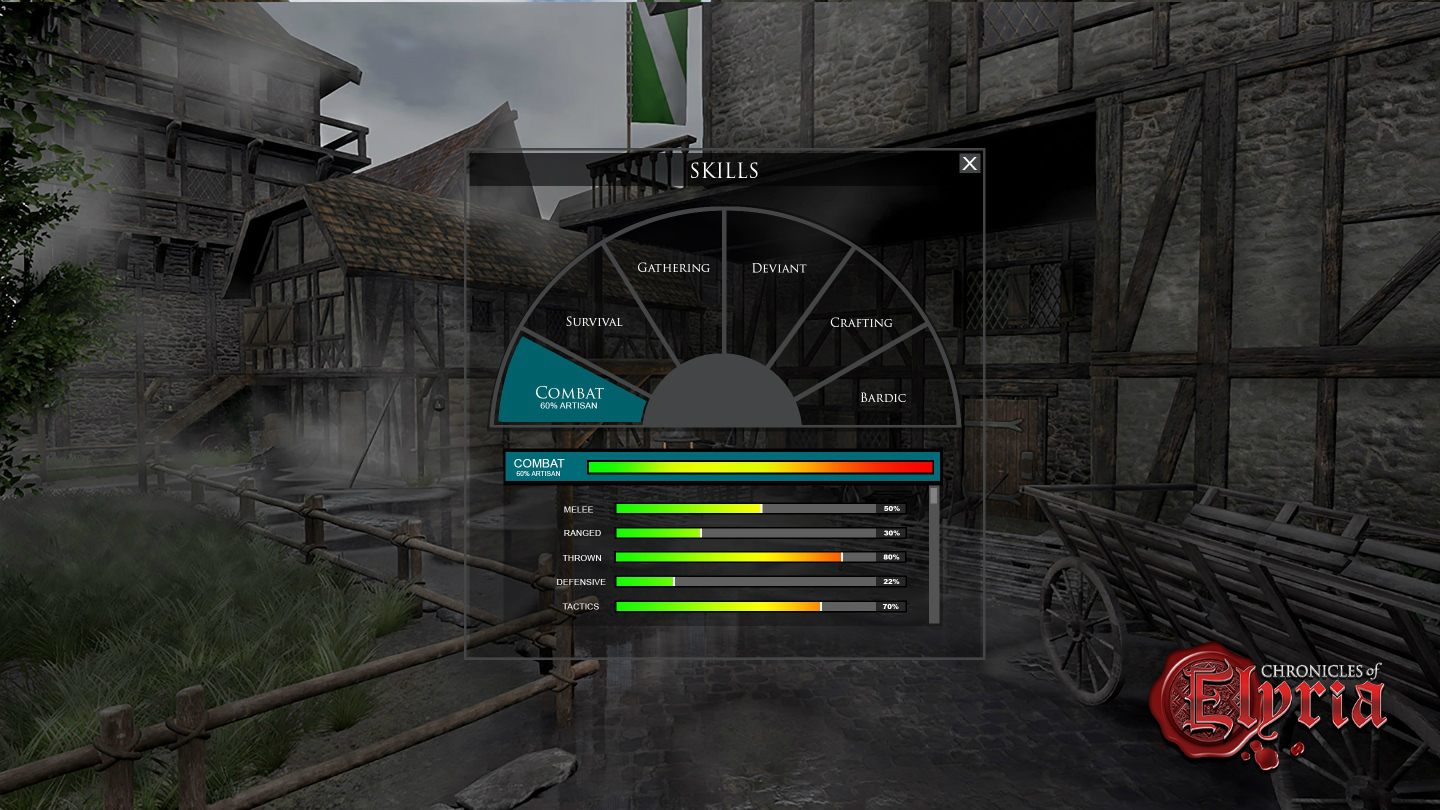 Beneath the top level of each skill tree there are secondary and tertiary skills which are referred to as Parent Skills. For example, below the Combat tree there is Melee, Ranged, Thrown, Defensive, and Tactics. Each of these is a Parent Skill which contributes to the successful execution of skills below.

In an attempt to discourage endless grinding we instituted a system of diminishing returns which we call "rewarding for failure." If you attempt a skill that is too easy for you, such that you can never fail, you won't learn anything and will never improve. In contrast, if you attempt something just beyond your current skill level, you’ll see a lot more character growth. After all, we learn a lot more from our failures than we do from our success.

Skills Mastery in Chronicles of Elyria is divided up into tiers with a percent mastery for each tier. The tiers are broken down as follows:

Put differently, we calculated how long it would take people to reach Legendary status over several lifetimes if they did nothing but work on advancing a skill. Obviously, that's not going to happen. So as people train and improve, the Soulborn Engine monitors progress and provides bonuses as necessary to ensure the top 1%, 10%, etc... will eventually reach the Legendary or Grandmaster tier.

You should also note those skill tiers carry across reincarnations and it will, in general, take a lifetime to become a Master, multiple to become a Grandmaster, and several to become Legendary. 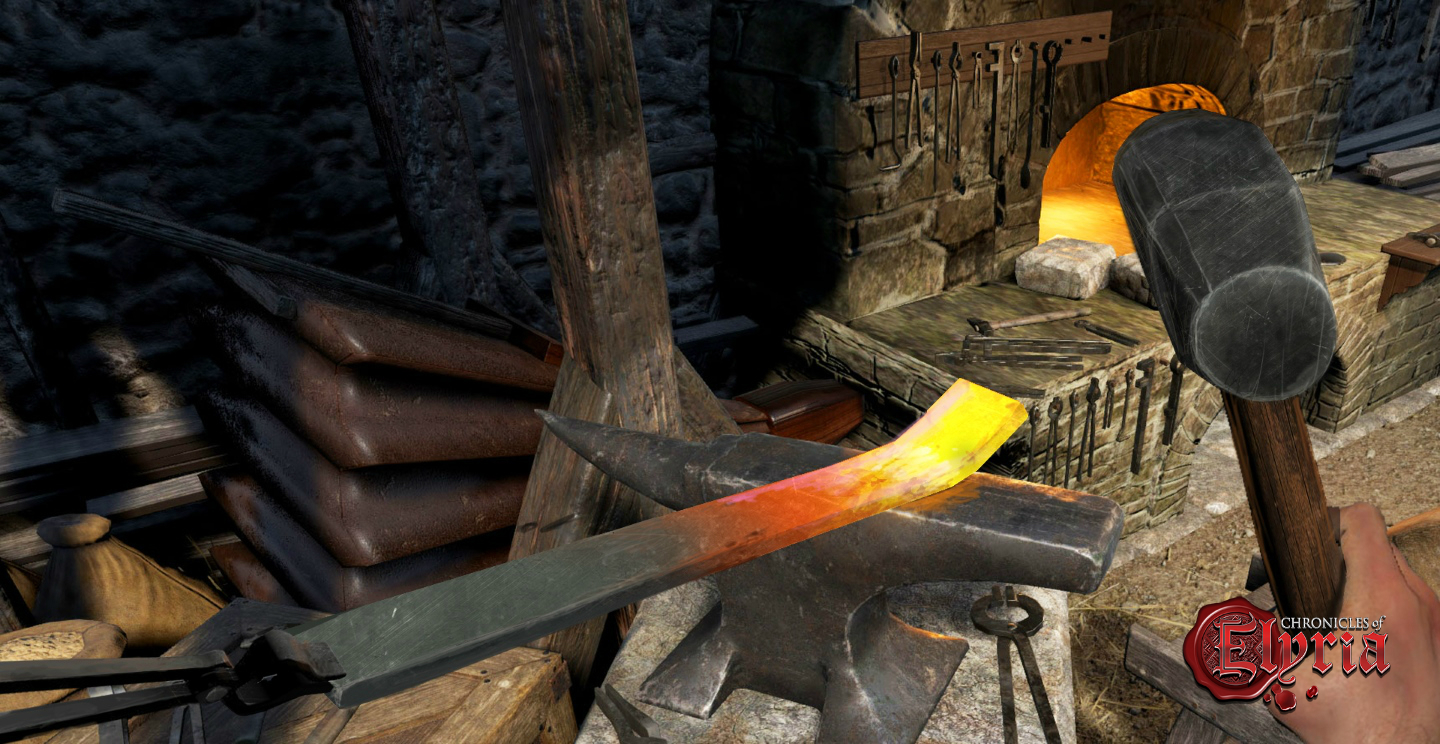 Figure 3 – In-game view of someone hard at work

All skills in CoE require a minimum amount of training in order to perform. Attempting a skill with a skill rating of 0% will always result in failure. To attempt a skill for the first time it'll be necessary to first receive training. There are a number of ways and places in which to receive training.

In most cases it's possible to gain the minimum necessary training to begin practicing a skill simply by reading a book about it. In fact, in most cases, given a full encyclopedia on a subject, it's possible to raise a skill all the way to Apprentice. Beyond that, it requires specific, rare texts to raise your skill in this manner.

Characters with the Scholarship skill can teach you other skills they know. This is generally an interactive process requiring both people to be online, however, sufficiently skilled characters can teach others via their OPC. To continue to gain knowledge through formal teaching, it's necessary the teacher have both sufficiently high Scholarship skill, and sufficiently high proficiency in the skill they’re trying to teach. In this way, it gets harder and harder to find good teachers the better and better you become.

In addition, they often say the best way to learn is to teach, and while that’s not 100% true here, teachers do develop their skills while teaching, in the same way they did before as the student.

Having a skill above 0% allows you to gain some skill points simply by observation. Being near someone performing a skill enough times will result in a passive knowledge transfer. However, root-level skills cannot be advanced beyond Apprentice via observation alone.

Once your skill goes above 0% you can begin practicing most skills on practice equipment. In the case of combat skills this will often be practice dummies. For other types of skills there are specific practice tools available which, through repeated use, can help slowly advance your skills. It’s assumed people will use these practice tools while offline via their OPC. Practice tools cannot be used beyond Journeyman skill level. One important thing to note, we believe “time = money.” As a result, practicing crafting professions that would normally consume natural resources in other games does not do so in Elyria.

Later this week we’ll continue with part two of this two-part series on Skills and the Skill System and take a deeper look at the skill trees, as well as go in-depth into crafting and recipes.