During Vox we know that people will actually be able to explore the land a little bit and KoE will be in part about defining borders and establishing the boundaries of territory, so its safe to assume that players during the actual release of these platforms (Not in Alpha or Beta) will be getting a sneak peak of the geographical terrain of their specific server.

This will give any one participating in Vox or KoE a huge advantage over those that don't once CoE actually launches because they have already been able to explore the land and discover some of the more valuable locations ( Rivers, mountain passes, new tows etc etc), or if they havnt explored it themselves perhaps they will have a map from this time period.

As a cartographer my question is do you think we will be able to make maps during VoX and how much do you think the land and terrain will change from Vox and KoE once the game actually launches?

I'm sure it'll change a little bit as it should be a persistent world and defining event may occur but I wouldn't except entire mountain ranges or river systems to disappear in the "in between". Sure a river here and there might dry up or change course but not all of them, and not over the 40-60 year span thats suppose to separate Vox/Koe from CoE

I didn't think the map was getting picked until way close to domain selection, not like I get what they will be using in Vox. But without a map, trying to remember anything clearly is going to be hard.

Perhaps I was mistaken or missed an update but it seems to me to make vox and koe work they need to have it overlaid the actual world we will eventually be playing in.

And KoE will definitely have to be apart of the world because it's about land and territory management and they have said through koe we can expand or lose land before the launch of the game. 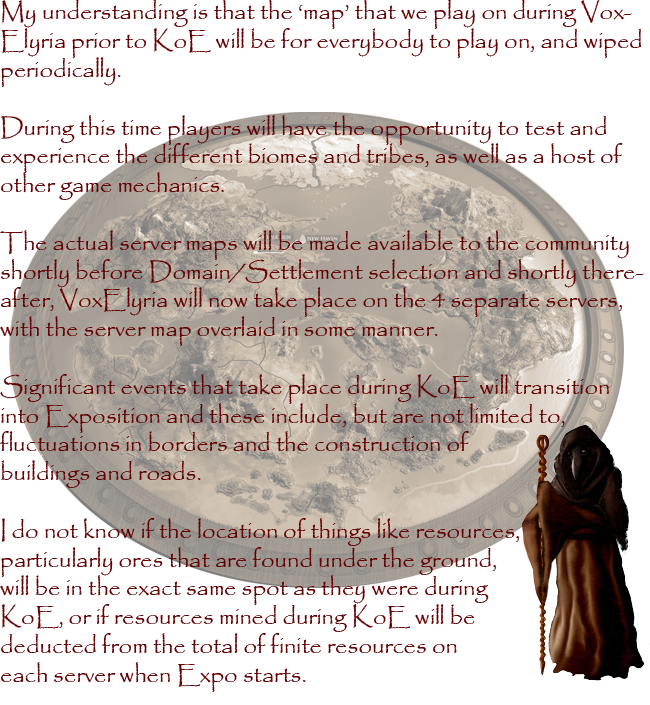 Got a question while reading.... after game Launch... what happens if cartographer share their maps online.

Obviously this will happen...but personally i hate that everything can be read in the Internet... this destroys the whole aspect...

Any Ideas to prevent CoE from this?

@Dleatherus that last part would be a great question for the de vs, maybe they will jump in to give us some insight.

@c0lalight It will happen and I don't think there's any way of preventing that. However the maps will be frozen time with out updates to them or modifications so they probably won't be as concurrent as maps in the game.

The only thing I can really think of to deter some one is some how make it impossible to screen shot? But that'd be pretty complicated

That has been discussed before and for many of us somewhat worrisome. The best response is that land changes hands, kingdoms, dutchies and counties grow and contract. Towns dry up and new ones spring forth. Resources also get scarce where new resources are discovered. New roads are built and bridges collapse. So... if you are a true cartographer for a kingdom or perhaps you sell your own maps I personally feel the world will change enough from time to time to keep you busy. However as far as navigation goes, I also feel once you get a map (in game or online) it will be sufficient for travel for some time. The main roads and larger cities will not change that much over time so if all you want is travel then any older map will work.

Note: Caspian has discussed the fact that many resources will be put online such as resource locations and maps. He stated where they can't stop that he feels the world will keep changing enough to keep everyone happy and a new feel to areas.

Got a question while reading.... after game Launch... what happens if cartographer share their maps online.

Obviously this will happen...but personally i hate that everything can be read in the Internet... this destroys the whole aspect...

Any Ideas to prevent CoE from this?