Riftwood has undergone a structural overhaul and has updated its website. In light of the developments, I've decided to update our forum post to reflect the changes. Below are some of the highlights that can be found on our website, which you can visit for a more complete picture. Keep in mind that as more details and mechanics are released, more information will follow and possibly change. Lastly, much of the information regarding our Duchies still need to be written or rewritten, which will most likely follow shortly after land selection.

The best way to contact us is through Discord. The Governing bodies of Riftwood consist of the Central Government, which is the Monarch from House Einar, who presides over the entirety of the Realm; the Dukes and Duchesses, who govern individual Duchies; the Nobility, who govern the Counties within each Duchy; and the local governments, managed by Minor Noble Houses, that draw authority from the County and Duchy levels.

The Ruling House of Riftwood for the past century has been House Einar. The Crown of Riftwood oversees the large-scale operations of the Realm; The Crown manages everything from the international trade agreements, declarations of war and peace, Kingdomwide infrastructure, Kingdomwide law and order, the allocation and rates of the Crown’s taxes, and other high-echelon affairs.

The Crown employs five advisers who each hold a seat within the Council of Corvus and assist in the management of the Crown’s affairs.

The Chancellor of Trade

The seat is voted on every two years in order to ensure the Network of Sanctioned Guilds’ needs are being heard.

The Chancellor of Prosperity

The Chancellor of Prosperity’s primary purpose is to advise the Crown on the needs of the populous. The Chancellor may employ utilize Maesters to conduct sensing sessions in various communities to collect data concerning the Citizens of Riftwood.

The Chancellor of Infrastructure

As an Official appointed by the Crown, it is the responsibility of the Chancellor of Infrastructure to act as an adviser on matters of buildings, roads, and infrastructural programs and projects funded by the Crown.

The Chancellor of Infrastructure essentially acts as a Contractor who employs Maesters as Subcontractors to manage Crown projects and programs related to the infrastructure of Riftwood.

The Chancellor of Coin

When a new project is purposed within the Council, whether Military of Civilian, the Chancellor of Coin reviews the financial ledgers and offers the Crown its advice in the allocation of funds.

The Chancellor of Coin also manages the logistics of tax collection. For this, the Chancellor may employ Maesters who may oversee the collection and transport of the coin. When needed, the Maester may request assistance from the King’s Army in order to safely transport the coin, or may hire local guards for the task.

The Chancellor of Lore

The Chancellor of Lore is a seat appointed by the Crown who is responsible for the documentation and distribution of new decrees, edicts, and laws. The Chancellor also maintains the Grand Library within the Capital of Riftwood.

Dukes and Duchesses are rulers of their Duchies in their own right, though final authority rests with the Crown. Each Duchy has its own culture and local laws which citizens are expected to abide by while within its borders, though Duchy Law cannot supersede or contradict Kingdom Law.

The Duchy of the Crown of Riftwood, governed by House Einar.

Duchy of House Thrax, the Steward of Riftwood.

Duchy of House Balaur, an old Noble House of Riftwood.

Duchy of Lady Amberly. Specializes in agriculture and the research and development of agricultural technology.

Duchy of House Winterborne; a house which was instrumental in the securing of the Crown of Riftwood during turbulent times in the Realm.

The Noble Houses are charged with the governance of Counties within Riftwood. Counts are able to form County Law, though it must remain within the confines of both Duchy and Kingdom Law. A Count or Countess may establish infrastructural programs, collect taxes, and oversee the Guilds within its borders.

Local governments are managed by the Minor Noble Houses in Baronies, and by Mayors in Cities and Towns.

The Crown maintains a Military consisting of four Orders, who make up the remaining third of the Council of Corvus. The Masters of each Order advise the Crown on military matters, as well as manage their individual Order. The Orders primarily garrison within Myrkir, with their headquarters in Aurielle City, but forces may deploy to various outposts throughout Riftwood. 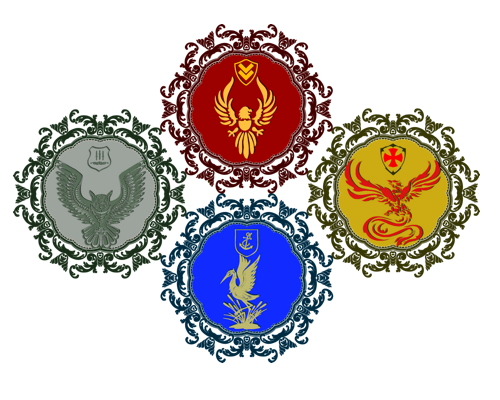 The Order of the Hawk

The Order of the Hawk is a combination of Centralized and Decentralized Command structures. The Order is led by the Master of the Hawk, who is charged with providing subordinates with training goals to be met during peacetime, the fielding of new equipment, and the managing of coin and resources for the Order. During peacetime, the Master networks with the Lords and Ladies of Riftwood to determine the need for aid, as well as the negotiation for lands to be utilized for training exercises.

Overseen by the Master are a small amount of Executors, who in turn manage logistics, disseminate Orders and Edicts, and oversee the large scale operations of a Legion. Legions will typically deploy together to a region where they may be split into its various Regiments to conduct operations and maintain outposts. During a large scale battle, a Legion will typically march together.

Within each Legion are a number of Regiments, each commanded by a Battlemaster. A Regiment is further broken down into Bands, led by a Captain; Bands may be broken down into the smallest element, a Phalanx, which is led by a Sergeant.

The Order of the Heron

The Order of the Heron is primarily a decentralized command. Orders for movement, deployments, and large scale operations come from the top, but decisions must be made at the Fleet and individual Ship level on a regular basis.

The Command structure is quite similar to The Order of the Hawk, the primary difference being the dual nature of a Ship’s crew.

At the Ship level, there are Seafarers and Myrmidons.

The Order of the Phoenix

The primary role of the Order of the Phoenix is to train combat medics, doctors, and alchemists.

Overseeing the Order and its operations is the Master of the Phoenix, who advises the Crown on medical assets and directs finances into various training exercises and research projects when requested by Doctors or Alchemists.

Under each Legionary Director are several Doctors and Alchemists. A Doctor may be assigned a Medical Sergeant within a Band or a Ship, though this depends on the number of Doctors and the number of Bands and Ships currently operating.

The Order of the Owl

The primary role of the Order of the Owl is to procure information which may be useful to the Crown as well as the protection and safeguarding of the Crown’s secrets.

Much of the structure and roles within the Order of the Owl remain a close guarded secret, though what is known to the public is that the Master of the Owl oversees several Syndicates which are responsible for a specific region in Elyria. A Syndicate is managed by a Artifex, who in turn oversees individual Inquisitors who operate within the Syndicate’s region.

The Knights of the Virindi Guard

Essentially, the Virindi Guard acts on behalf of the Crown in any matters required.

Overseen by the Grand Marshal are a handful of Marshals. Marshals, like all of the leadership roles in the Order, play a dual role. The Marshal is expected to manage the administrative aspects of his or her subordinates, while maintaining combat skills and equipment.

Marshals oversee several Justicars, who are the first-line leaders of the primary combatants of the Order, the Sentinel. Justicars act as a Sergeant, overseeing daily training and tasks.

The Sentinel is the primary fighter of the Order. A Sentinel must be a master in several forms of combat, a brilliant tactician, and carry a Knightly dignity at all times.

Lastly, the Squire is a prospective Knight, wishing to gain entry into the Order. The Squire works directly for a Justicar, learning the ways of the Order while performing the menial day-to-day tasks. Once a Squire has been deemed worthy, he or she is Knighted by the Crown and given the title of Sentinel.

The overhaul! Been a long time coming.

@the moderator, can i get this post to replace my current sticky?

Does the name Order of the Hawk have any relation to the Band of the Hawk from the anime Berserk?

Does the name Order of the Hawk have any relation to the Band of the Hawk from the anime Berserk?

No relation. I've never seen Berserk. All of the orders are named after a bird of prey, hawk seemed most fitting for the primary military force, though.

Just getting into the game, and I am interested in playing a Brudvir shipwright. I want to be the first to make proper raiding longships!

I will be playing USA-West, and I was wondering which clans your kingdom will be made of, and also, how I ought to get involved if you feel I might make a good fit?

Hi, BattleDrumz! Was nice to chat with you in our discord! Congrats on your citizenship. :)

Hello. I’m a random count (Blackshadow) in Silvermoon Gate. Now that the duchy is claimed, I want to introduce myself to the Duke. Please send message.