Wanted to discuss the possibility of losing things like arms/legs/eyes and the mechanics of it. I personally think limb severing is a plausible mechanic but comes with a lot of difficult-to-work around potential downsides. However I also think prosthetics (either regular or magical) would be an interesting thing to play around with.

Member of the Azmar City Council, Student of Tyto Academy

As it stands you cannot lose a limb. Here is one of the quotes from Caspian regarding the matter.

You can lose functionality of a limb, but you can't lose one. While it's more "realistic", it's not fun to have a permanant disadvantage like that.

There is also the issue of having to have additional animations if amputations was a thing, which in the end is likely much more work for any slight gain you might get. 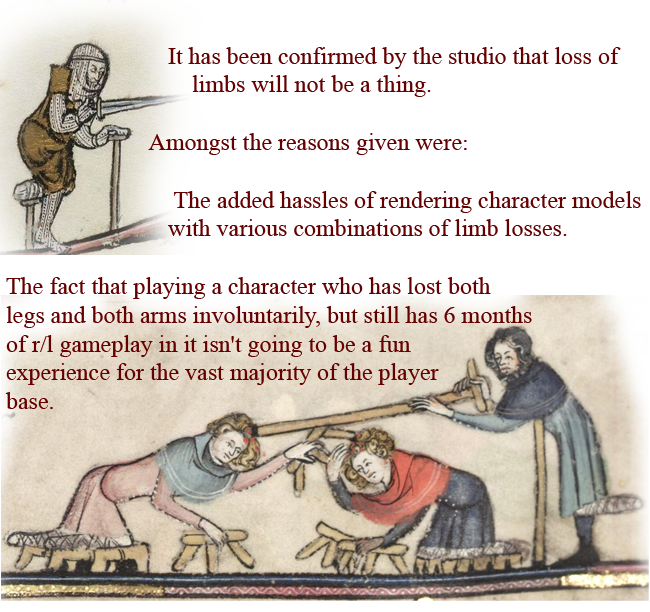 I think it's very hard to simulate severing, especially in combat situations where it often would apply, because if there's any element of randomness to it, then all the headaches we see with RNG for loot would come into play here.

But this would be interesting as deliberate acts in specific scenarios like crime and punishment. Caspian is right about this being not fun but ... imagine it as an alternative to jail - choose your punishment, convict.

I wonder if there could be voluntary replacement of a limb with a magical prosthetic, bionic augmentation if you will. ~~~~~~~~~~~~~~~~~~~~~~~~~~~~~~~~~~~~~~~~~~~~~~~~~~~~~~~~~~~~~ A kingdom with emphasis stumbles upon a higher up in their mortal enemies army. He is abandoned by his troops as he lays, bleeding out on a crimson field following a fierce battle. The general of the kingdom offers the man a choice, join us, and take revenge on those who left you to die, or be sent home in an urn. The man knows his time is nearly out, he cannot afford too many more deaths before his life is over, so he accepts. They bring his dying body to the healers of the land, and as the head healer observes his wounds, he utters. "We can rebuild him. We have the technology. We can make him better than he was." And thus, the first high fantasy cyborg is born.

I believe all men are capable of evil! We should not be of this world were good and evil not twined together.

There wont be chopping off limbs as it screws with the character mesh according to the devs.

Can there be npc characters with missing limbs? I would hire a one legged blacksmith over a three legged one any day of the week.

'Permanent' Limb Loss is only a viable mechanic in a longterm game if there's a straightforward path to replacing/regrowing those limbs, which doesn't suit this game world. THOUGH, if I'm not mistaken, we're definitely looking at options for acquiring scars, so there's that :)

On a comical aside, after losing an eye the game should turn into 2D or isometric mode due to the loss of depth perception.

On a comical aside, after losing an eye the game should turn into 2D or isometric mode due to the loss of depth perception.

Maybe it toggles your view into VoxElyria. That would suck.