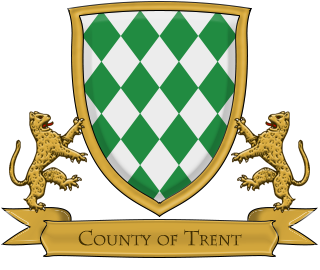 I intend to foster a gaming community that is mature and fun for players of all play styles. To do so requires that I govern fairly and in a way that promotes the development of the entire county. I believe government is best when it governs least, and I intend to avoid excessive taxes and economy killing regulations.

I will refrain from declaring a "county focus" or committing to specific plans until after D&SS. However, this does not mean I do not have ambitions for the county.

I welcome you to realize your dreams in Trent.

To create a county that is economically prosperous and interesting to play in, I aim to:

An advisory body to the count consisting of all mayors and barons, and possibly the local sheriff or other important ducal or royal officials. Acts as a forum for county leadership to coordinate efforts and secure the prosperity and stability of the community. On occasion, the Lords Court may serve as an actual judicial body, but this will depend largely on royal and ducal law.

An assembly of notable members of the county gaming community which meets on a monthly basis with the count to appraise him of the state of the county and act as a venue for the airing of grievances. Membership is by invitation only, and may include large land owners, important business owners, religious leaders, guild leaders, famous bards, etc. The council has no authority whatever.

Roleplay is welcome and strongly encouraged within Trent, though it is by no means mandatory.

Message me on Discord at vonT#0898: https://discord.gg/9XCtmsG