The Flower Festivals of the Pilgrimage of Renewal

For as long as anyone can remember and, indeed, far further back into Elyria's history than that, the Pilgrimage of Renewal has been a common fixture in the lives of nearly every mann from every tribe. Whether it is simply witnessing the spectacle of countless pilgrims making their way across the continent to mark the Cardinal Miracle, or donning the pilgrim's garb and setting off on the trek themselves, the event marks at least one milestone in everyone's life. However, as the passage of time marches on, those who hold the occasion dear have come to wonder if Elyrians have lost sight of the ritual's meaning. Despite commemorating a moment in their shared history that could have ended in the literal starvation and destruction of Mannkind, many have come to see the event as little more than marking a time when the weather is always good and the living is easier.

This is perhaps most obvious when one witnesses the practice of the Flower Festival, most commonly observed in Neran territories, in the hopes of being associated with the Virtori faith's Festival of Virtue. The flower festival is most famously observed by the proprietors of the Free Mann tavern. Originally built by Urstan Thewes nearly two centuries ago, the Free Mann was the first standing structure of its settlement. The legend says that Urstan had given up the pilgrimage part way through, fed up with the tortuous plodding march across the landscape and injured from a fall that left him at the bottom a hill in a field of flowers, the seeds from his own bag of Cardinal Poppies now spilled into the dirt between them, he vowed he'd never march anywhere again and set to building. He had a plan to thrive and he wanted to use the pilgrimage to do it.

He built the Free Mann tavern as a trading post at first, including a stable able to house wagons and their teams. He expected that the pilgrimage and similar practices would bring travelers in need of rest and resupply but, to his dismay, pilgrims didn't ask for much and traders were interested in major hubs of commerce that could afford to buy more of their wares. His drinks went unsold and his foodstuffs moldered in storage, but behind the tavern the field of flowers, now streaked red with the Cardinal Poppies he himself had spilled, thrived as the spoiled goods he threw out enriched the soil. They say the sight of such colorful blooms inspired him and showed him a way to bring people to him, instead of breaking his vow and setting off somewhere new.

So he built a large outdoor stage, broke a trail that went around the hill instead of over it, and started posting signs along the route extolling travelers to see the wonder of the flowers. In a stroke of genius, his signs also offered free water to weary travelers and their animals. Whenever a traveler would come, Urstan Thewes (and later, his employees) would perform a jaunty dance and sing about the miraculous flowers. Over time, the silly tavern in the middle of nowhere became a curiosity. 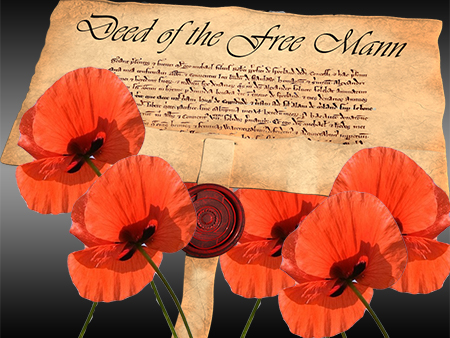 When Urstan died, he left the tavern to his oldest employee, a pilgrim who, like Urstan, had quit the pilgrimage route and decided to stay. The new owner gave the tavern its name, finally giving the little stop off the name the Free Mann in reference to Urstan's defiant choice to "split from the herd." Likewise, it was the tavern's second proprietor who first commemorated the event of "their own Cardinal Miracle" by promoting a "flower festival" to be held at the tavern, beginning with the appearance of the spring after Longest Night and lasting for as long as the flowers bloomed. (which could be up to two years, in some cases!)

The flower festival itself was, and remains, nothing but a thinly veiled party; a revelry involving more wine and song than flowers or commemoration. When the next pilgrimage began, the pilgrims on the route found themselves walking through the festival and many more were attracted to spend from the meager collection of coin they brought with them on their supposedly austere journey. By the time of the following Pilgrimage of Renewal, the festival was infamous and the little curiosity on the plains became the reason many young "pilgrims" took it upon themselves to don the pilgrim's hat and gloves and make their way across the land.

Others would try to replicate this tactic on their own legs of the pilgrims' path, giving rise to the flower festivals Elyrians can find even today. It's largely agreed that none, as yet, have ever come to rival the fame or infamy of the flower festival at the Free Mann. Theologians, philosophers, and historians all lament this practice as "diluting the meaning of the Cardinal Miracle," but business is always good at the Free Mann, and the practice seems unlikely to end.

The Cardinal Miracle of the Second Age