The goal of Domain and Settlement Selection is, and always has been, to allow our community of backers to help build a world in their image. To shape it and mold it as much as possible to their own liking. Rather than jumping into an online game where the kingdoms, domains, and towns were sculpted, curated, and named by the designers, we want to allow the players to do that. Rather than jumping into a game where the political boundaries have been set by the studio, we want a world where the players have taken ownership of drawing those lines through the domains they've selected and combined.

We want a world where the history isn't entirely written by the narrative designers at Soulbound Studios, but where the rich backstory that players will come into on launch day has in some way been penned by the players. In doing all of this, it's not just our world, it's your world too. And Domain & Settlement Selection is a big part of that. Really, Domain & Settlement Selection is the next meaningful chapter in the epic adventure players will be participating in between now and launch, in which they get to contribute to the world as it will exist on launch day.

The Teams Working on D&SS

Each team is dependent upon the output of the previous team in order to get a finalized set of data to test and validate the work they've done on their part. The metadata team can't finalize their work until the content team has a final version of the landscapes for each of the servers, and the web team can't test and validate the website fully without the associated large data set that comes from the metadata team.

Each team has worked diligently for several months, encountered roadblocks that have put more and more pressure on the teams following them, and have continued to persevere, working late into the early hours of the morning, and on weekends.

First, the content team has probably the most critical job of all, as the choices they make form the literal foundations upon which the world is built. The terrain being generated by the content team is not only an important and necessary input into the metadata generation tools, but is also the same terrain players will one day walk upon in Chronicles of Elyria. Whereas the metadata team can make adjustments as necessary after D&SS begins, and any bugs in the D&SS site can be tweaked, the content team is feeling the pressure as they know the output of their work must, up to a certain precision, be final at this point of development.

But developing a world the size of Elyria isn't easy, and in fact, has proven way more computationally expensive than we had anticipated. When we were developing the maps for Map Voting we were able to generate 2k images (2048x2048), where each pixel of the image represented approximately 128m. But in order to get the definition the metadata team needs to accurately generate rivers, roadways, resource maps, etc., we have to generate world data at a precision of 4m per pixel. To put that in perspective, it means the content team is working with a data set that is literally BILLIONS of data points. And each iteration of the world generation process passes through a series of tools, some of which run processes on the data set using complex graphs like this: 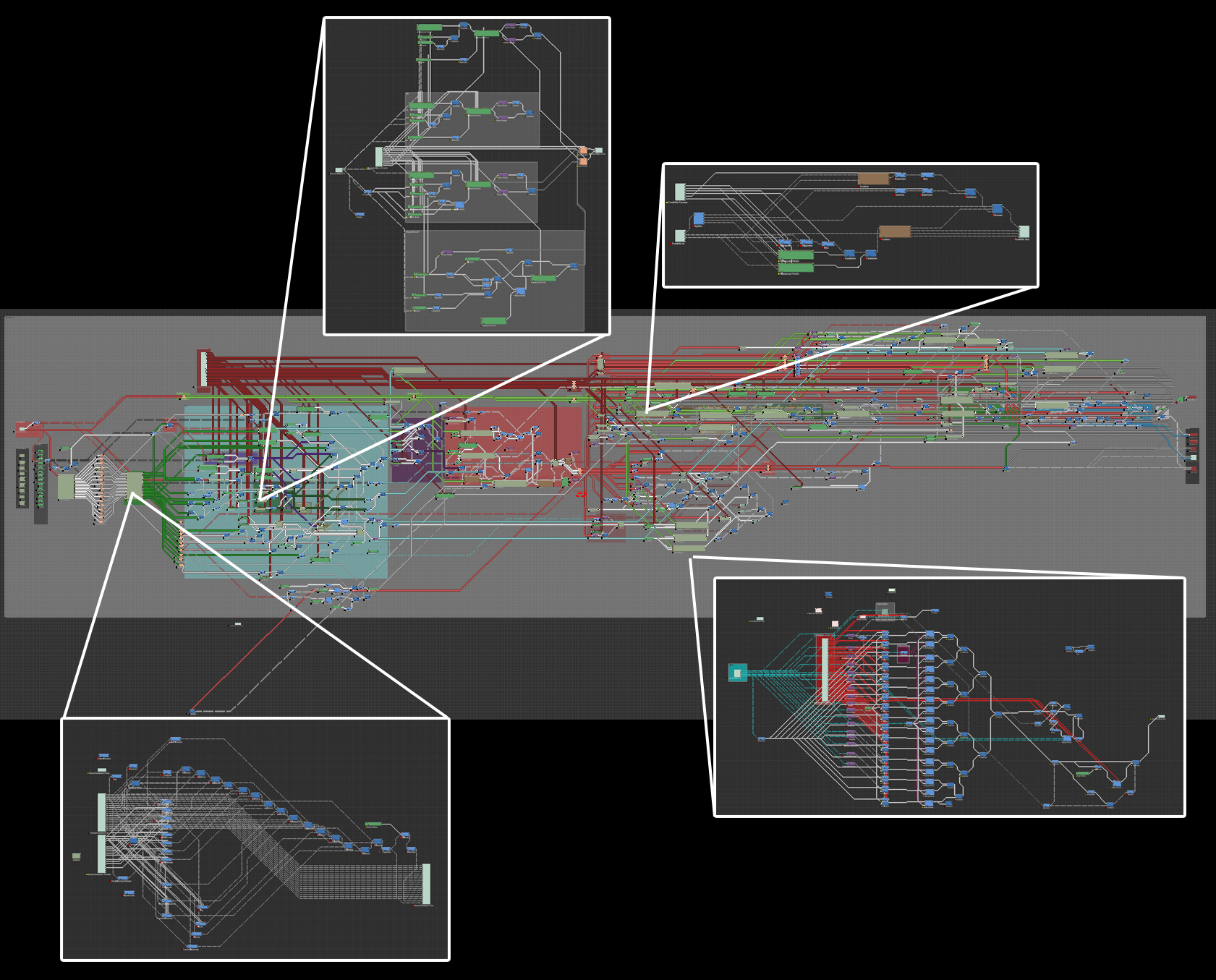 Note that the pop-outs are just enlarged areas of a smaller node in the base node graph. Each of those nodes are themselves miniature processes that run over some or all of the data points of our map. While we were able to run the world generation tools on our own office machines for map voting, the sheer volume of data, and the complexity of the processes we're running, has forced us to migrate execution of our world generation tools to a cluster of 72 core machines in the cloud. These machines are crunching through the processes, spitting out the generated data as quickly as it can - but it's still taking too long.

Next, there is the metadata team. The metadata team is responsible for taking the above 65k pixel x 65k pixel images (Many GBs) that are output for each server and calculating a set of data for each one. To begin with, the team must calculate, based on the biome, the precipitation, water retention rates of the soil, the angles of the terrain, and what the water on the map will look like. Because the data set is so large we have to work with a series of 256 different 4k "tiles". One step of the output looks like the following: 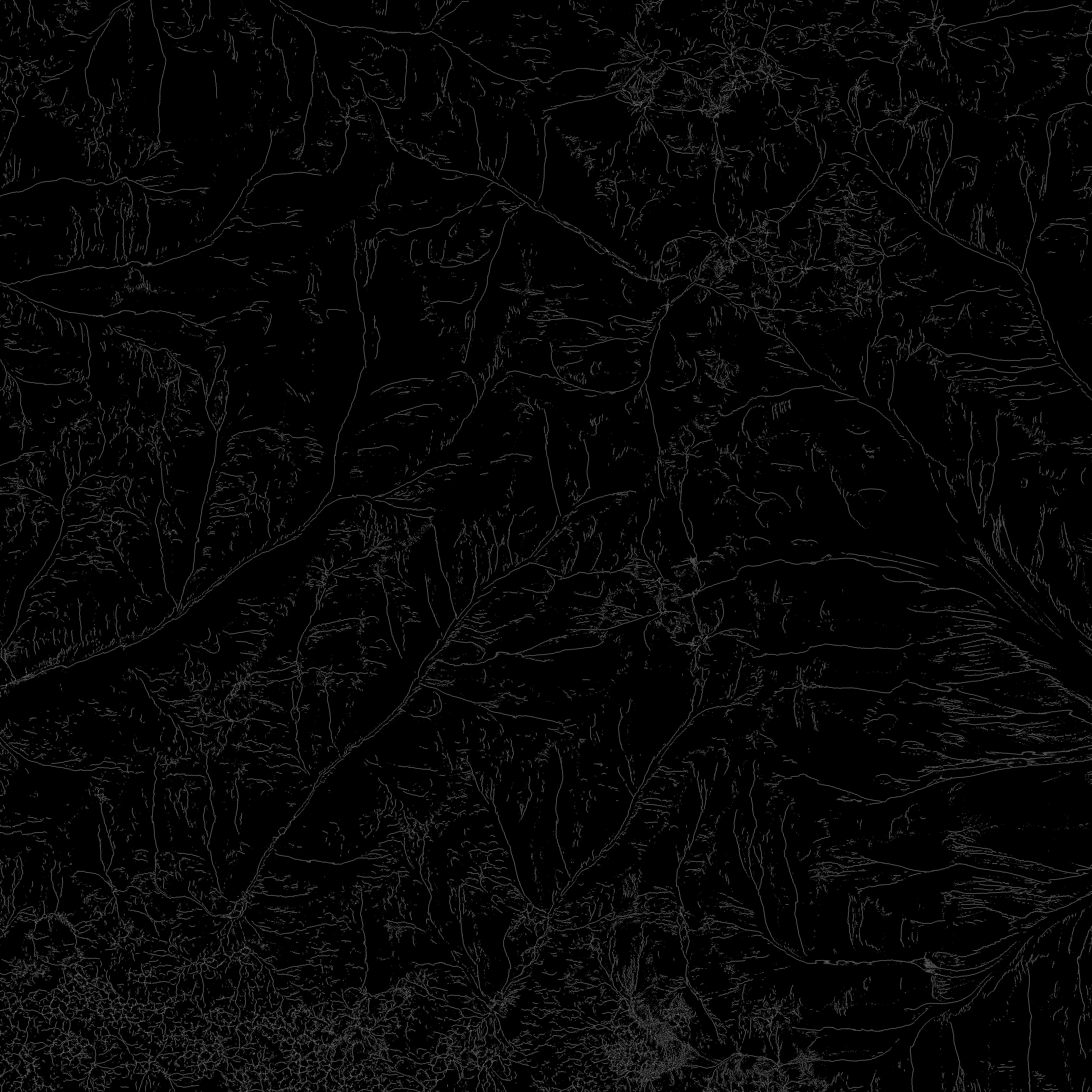 In the image above, which is just a simplified view of the data set, you can see where water could potentially move or settle. This is based on the following 4k image showing the elevation data. 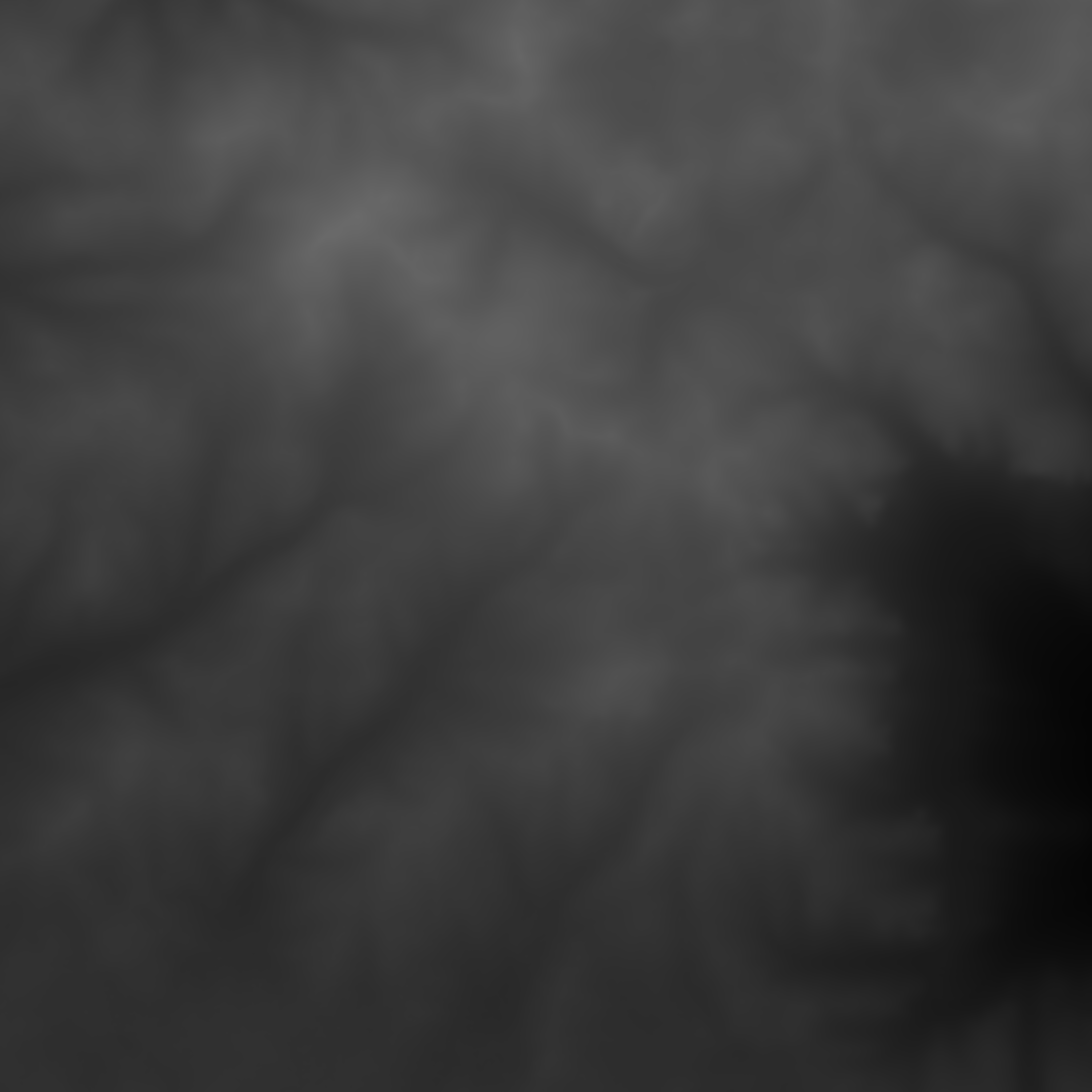 When combined, you get a sense of how the terrain is being used to determine how and where water can flow. 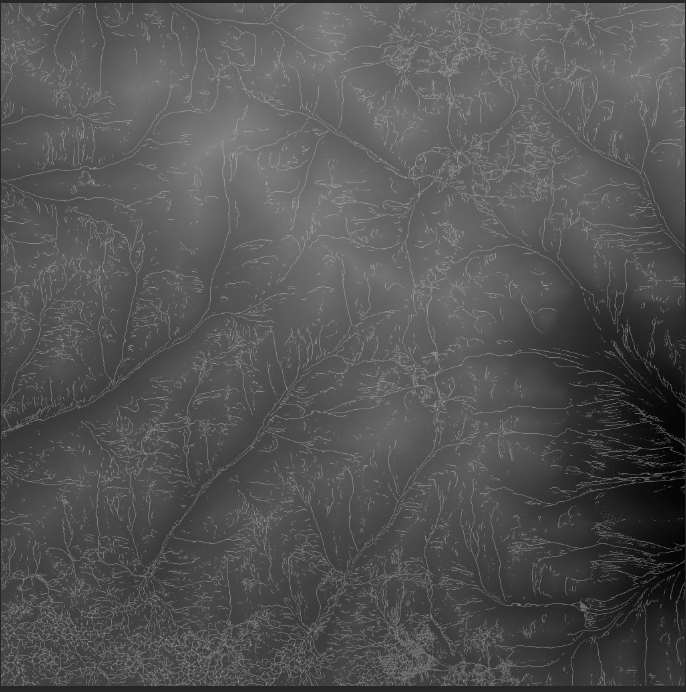 But that's only the first step. Once we've established where the water is, we must then run additional tools that go through the entire data set and determine where resources are located such as food, wood, stone, suitable elevation, and other factors to generate a "Quality Matrix." This quality matrix is then used to calculate the relative value of each parcel of land in the world, which is then used to determine where the many settlements of each biome will be located, and where the corresponding roads will go.

And again, we're not done yet. Because then we have to not only calculate data for the settlements, such as their wealth, population, size, tribal distribution, and resources, but we must also name the settlements. That sounds easy - but we try and use organic methods of naming our settlements, so we use the same methods used on earth - many of which are based on the landscape around the settlements. So we have to determine whether the settlement is on a hill or bluff, along a lake, next to a cliff, etc. And then, once we're all done, we pass our nearly 100,000 256x256 images that are created from this data, along with all the metadata itself that is pushed up to the database, to the web team for use in developing the portal.

The web team are the final consumers of the data. They are responsible for implementing a map system that allows players to navigate and view the entire starting continent of each server, streaming in GBs of images as necessary to do so, along with implementing the UI/UX to allow players to lock in their chosen domains, manage the process of picking multi-domains, view all data associated with each of the domains and settlements in an aesthetically pleasing way, and of course, submitting their choices. No team has an easy job, and every team has been working hard to bring the domain & settlement selection tools online. But...

In spite of the effort put forth by the team, the Domain & Settlement Selection world generation and tools are not yet complete, and won't be fully complete for several more days, in addition to the time we need to thoroughly test the website.

When we realized that we were going to be unable to ship the tools necessary for the self-selection of domains and settlements by the chosen start date, we reached out to the 20 monarchs, spread across each of the servers. They've agreed that, if given some additional data, such as the tribal distributions of the duchies in the biomes, the size of the larger settlements and some sustainability information, that they feel confident participating in Domain & Settlement Selection "offline," without the aid of the tool.

So on Monday, when D&SS begins, we'll be working with the monarchs of the different servers behind the scenes, allowing them to submit to us which kingdom(s) and duchy(s) they'd like to pick (still respecting Influence Order). We will then propagate that information to the rest of the community. We will likewise make available what data we can about the various kingdoms and duchies to the rest of the community - the Royals in particular - who will begin D&SS in Week 2 as planned with the aid of the D&SS website.

So while the monarchs will be working with us offline, our intention is for the Dukes, Counts, and Mayors to gain the benefit of using the tools we're working on as planned, with full access to the Domain and Settlement Selection map interface.

One Final Point on Influence

Before I wrap up this update I also wanted to amend one additional policy we announced previously. It had always been our intention to allow people to continue to gain influence throughout D&SS and, in doing so, shift their start time. And while we saw no problems during Surname Reservation, we have heard concern from the community that as soon as people see their start time, in spite of the fact that they cannot see anyone else's start time, that it'll create an unnecessary and potentially harmful influence race. That's not our goal.

Our goal is to give players a way to shift their starting window by a small amount, if they choose to, in order to allow them to pick at a more convenient time. But, given the feedback, we're making the following adjustments to our previously announced policy on influence and start time.

These constraints are being put in place to ensure our intentions are clear, to allow people to pick at a more convenient time, without encouraging an influence race. This is also the best compromise between our original intentions, and those announced previously as a miscommunication.

That's all folks. With that, I'm going to wrap it up. While the work involved in developing complete worlds is challenging, and the sheer volume of data and calculations is forcing the development process to take longer than even our most generous estimates suggested, we remain committed to beginning Domain & Settlement Selection on time, and appreciate the willingness of the monarchs to work with us in ensuring a timely event.

Building worlds of this size is a monumental task - building four of them simultaneously is unheard of. And we appreciate your patience as we complete what we began. In the meantime, don't lose sight of the bigger picture. Beginning early next week, popcorn will be eaten, drama will ensue, and a few tears may be shed as monarchs begin the process of Domain & Settlement selection by picking their kingdoms and duchies. As soon as the kings and queens begin choosing, we'll let you know what choices they've made, and will provide what information we can about the generated worlds as soon as we can. Stay tuned!