In most MMOs today, roles such as shopkeeper, merchant, innkeeper, bounty hunter, and courier, when even possible, are constrained by the rules of the game engine. Things like quests or tasks, parties and raids, trade, auction houses, and mail systems are either NPC-driven or governed by built-in game mechanics. Instead of providing opportunities for immersion, role playing, and dramatic situations, they instead act as a 4th wall, forcing players to interact in the world (like a theme park), rather than with the world.

In this week's design journal, we're going to talk about Player Contracts - perhaps the most important feature of Chronicles of Elyria. Contracts give power back to the players, unlocking an infinite number of occupations and professions and allowing them to play roles in Elyria even we haven't thought of. The foundation for marriages, guilds, trade agreements, in-game mail systems, families, and even governments, Contracts play a crucial role in Chronicles of Elyria and solidifies its place as one of the first true sandbox MMOs. 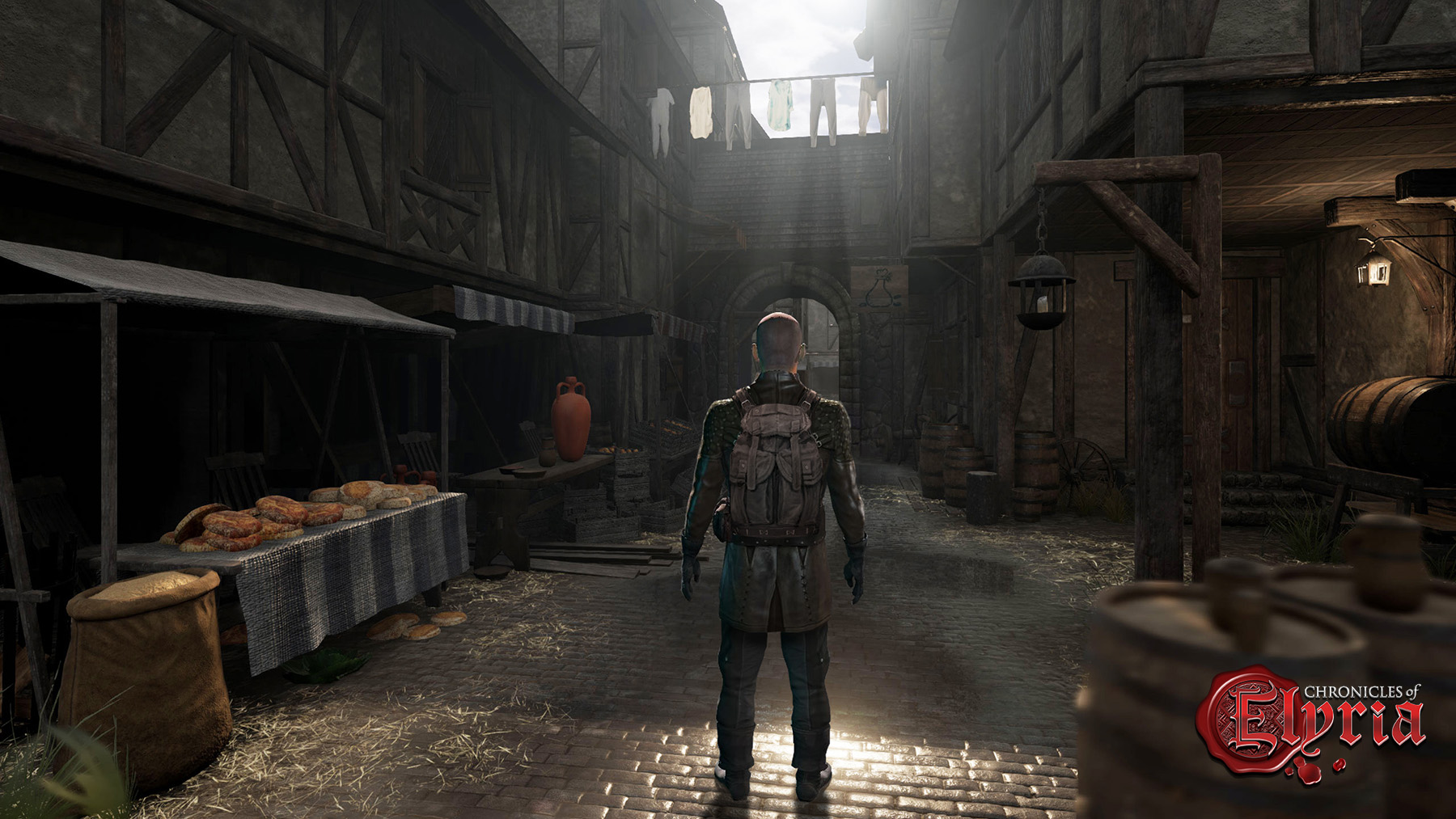 Contracts in Chronicles of Elyria are first and foremost about solving the trust issues inherent in existing MMORPGs. In our world we negotiate, make deals, and provide cash in advance all the time. We do that because we trust the legal system and peoples’ moral code. In most MMOs there’s no legal system to speak of and the anonymity afforded by the Internet often brings out the worst in people. This creates an environment where, rather than enabling massive collaboration, people are forced to play a game with potentially tens of the thousands of people, as a single-player game.

Don’t believe me? Let’s take the classic example of needing to get an item built. You haven’t raised your mining or blacksmithing skills but you still want to be a competitive swordsman. You learn that there’s a powerful sword but to create it you need to gather 10 lbs. of iron ore and some rare gems - in addition to having the necessary crafting recipe.

First, you’re going to realize you don’t have the necessary mining skill to harvest the ore or the gem. You have three options: either raise your mining yourself, buy the items from the auction house – requiring no player interaction, or spam trade chat asking for someone to trade with, which rarely creates long-term, meaningful business relationships.

Assuming you manage to procure the necessary materials, you’re now faced with a second problem – you lack sufficient skill, and likely the recipe, to craft the item. The most logical solution would be to take the materials to an appropriately skilled craftsman and ask them to make it for you. But, in doing so you encounter the real trust issue. You’ve just acquired a very expensive, very rare gem which you now must hand over to someone else for them to create the item for you. As you open the trade window you ask yourself “What’s stopping them from keeping these rare materials for themselves, selling it on the auction house, or even crafting the weapon and selling it back to me at higher than the agreed upon price?” In most games, the answer is nothing. In Chronicles of Elyria, the answer is Contracts.

There are two types of contracts in Chronicles of Elyria, Explicit and Implicit, and each one is initiated differently. Explicit contracts are more like your traditional contracts. They’re written documents which are reviewed and signed by all members who want to execute them. Signing the contract means you agree to uphold your end of the bargain or face the pre-arranged consequences. Contracts, explicit or implicit, can be one-to-one, one-to-many, or many-to-many. This allows for an agreement between you and another, between you and several other people, or amongst a collection of people. 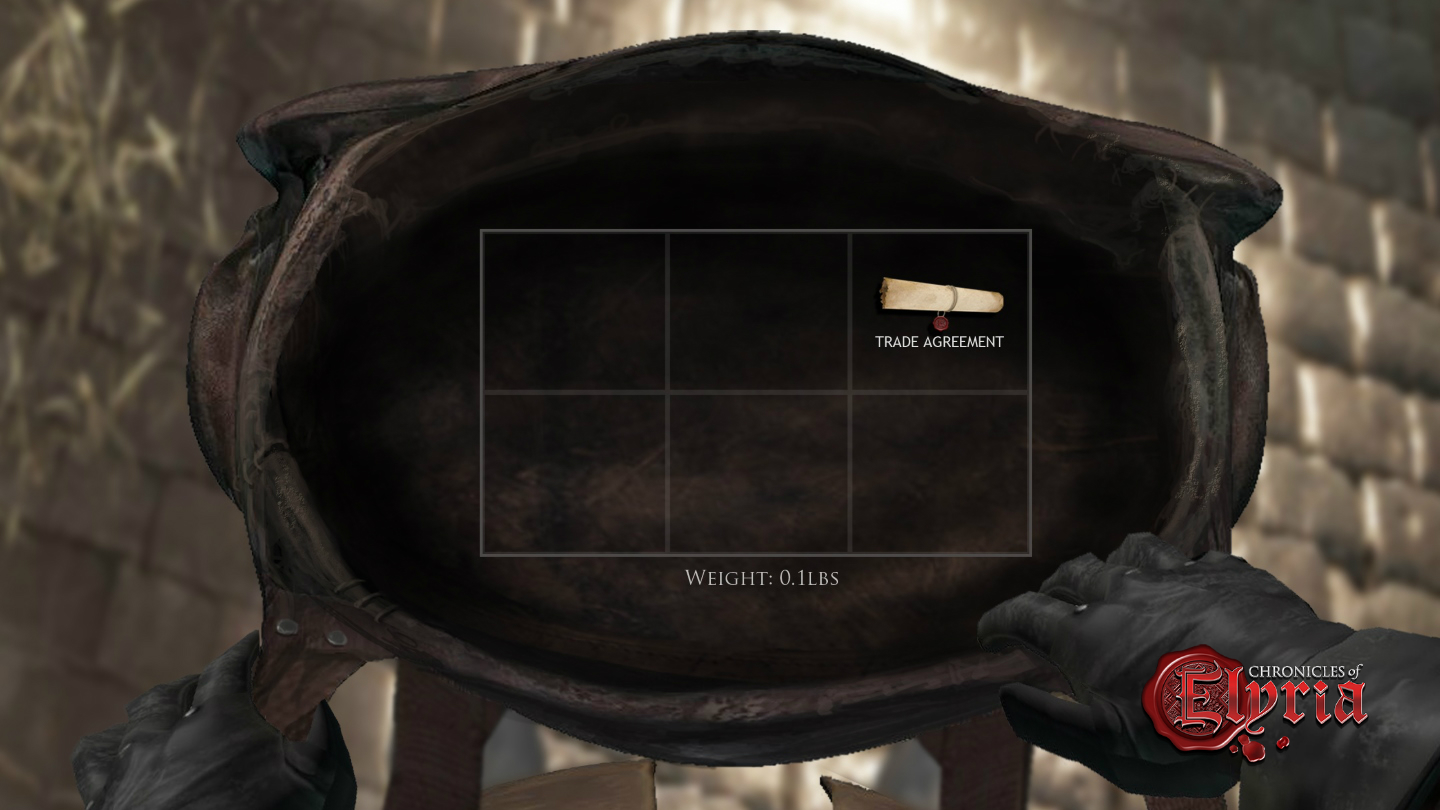 Each type of contract acts like a template until the point in which it’s activated. At that point, all the blank spots for things like names, quantities, costs, and references to items or activates are filled in during negotiation. You can see an example of an early Trade Contract in Figure 3 below.

As Chronicles of Elyria uses Contracts in place of what would normally be Quests or Tasks in other MMOs, it shouldn’t surprise you there are contract templates for many of the same activities you’d be asked to do in other RPGs. For example, there are contracts to:

By providing stock contracts for the above activities it’s immediately possible for players to create tasks in the same way NPCs do. You could log off for the day and leave your OPC behind, offering X amount of money or other objects in exchange for placing resources in your shop. When someone drops the resources in your warehouse, they can collect the money from you. But how does the Soulborn Engine know the contract is complete? I’m glad you asked.

Characters going about their daily lives are constantly doing things. They’re going in and out of regions, interacting with items, talking to people, trading, engaging in combat, etc. There are literally dozens of things your character can do while in Elyria and each of them generates a Character Event.

Whenever you a sign a contract the Soulborn Engine begins waiting for you to perform specific Character Events related to the contract and uses those to track your progress.

This system is also used to help you track your progress on-screen. Selecting a contract you’ve accepted from your inventory allows you to track the contract’s objectives. This, like in most MMOs, gives you an on-screen reminder of what you're trying to do and whenever you complete an objective the user interface is updated to reflect your progress.

While we’re not going to spend any time in this design journal talking about how crafting works – that’ll be part of the next design journal, I did want to talk briefly about who writes them and who uses them.

Contracts are complicated - even in our world. The more clauses and conditions they have the more difficult they are to author correctly. When designing the contract system we had a choice between making it something anyone can do and making it the focus of a specific type of crafter.

In the end, we decided that contracts can be used by anyone while they’re written by those with a specialization of the Scribing skill called Contract Writing. In addition, how complex a contract can be – the number of clauses and conditions it supports, is directly proportional to the skill of the writer. Characters just starting out will only be able to write simple Trade Contracts, while those more advanced can write guild charters and patents, marriage agreements, and even laws.

Contracts are made to be broken – and enforced

Like most features in Chronicles of Elyria, the Contract system introduces a fun new mechanic which is inherently exploitable. It’s designed to increase your confidence that it’s safe to do business with someone, however - like in our world, that's not always the case.

Whenever you initiate a contract there’s a set of consequences for breaking it. If either party breaches the contract they’re at risk of having to pay the consequences. These consequences can be enforced but it's up to you, or someone on your behalf, to enforce them.

We’ve put systems in place to make enforcing contracts easier. Once a contract is believed to be broken, and assuming you have a copy of the contract, you can use it to generate a Bounty Token. This token gives the possessor the right to apply consequence to the person who broke the contract. This can mean taking money or items off of them, reclaiming things from their homes, or even incapacitating them and bringing them back to face justice.

Which types of consequences are allowed is based on regional laws. Depending on the County you're in it may be legal to retrieve your stuff yourself. In others counties it may be necessary for a Sheriff to reclaim your goods. And, in yet other counties – those which have chosen a more lawless disposition, there may be no way to enforce a contract at all.

As I mentioned before, this all assumes you have a copy of the contract in which to enforce it. If someone were to somehow get the contract from you before you enforced it, there’d be no proof the contract ever existed at all. 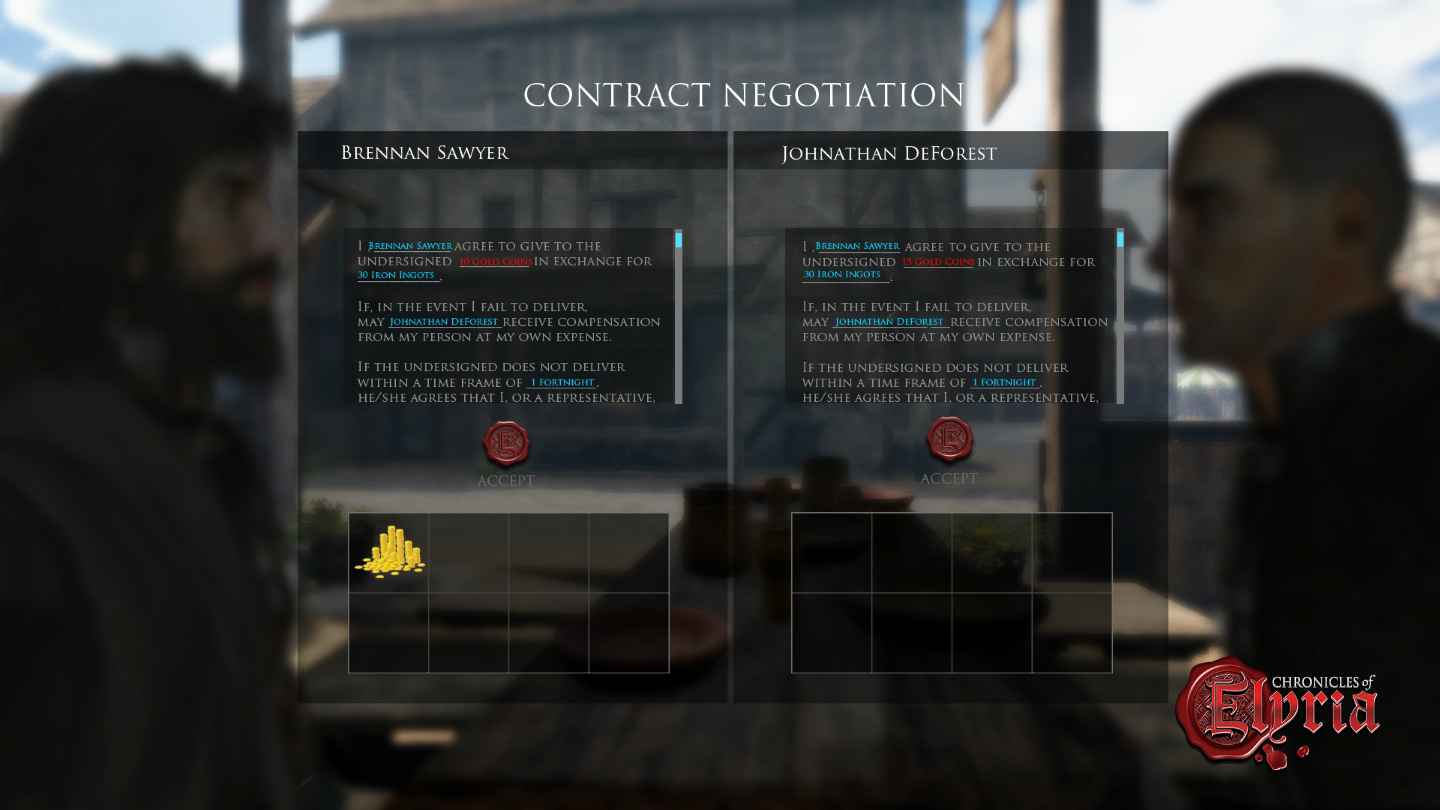 Local, Regional, and National leaders can draft laws as part of their region. Once signed in as law, anyone who steps foot within their jurisdiction is bound by the implicit contract. This gives governments a huge amount of flexibility with respect to customizing what is and is not allowed within their domain, and what the consequences are.

To make understanding the legal system easier there are different types of contracts for different types of laws. There are contracts for the tax code, criminal code, citizenship, land ownership, inheritance, and even government type. As with other types of contracts it’s impractical in most situations to advance your Contract Writing skill to a point where you can draft laws. Instead you’ll want to retain the services of a skilled Contract Writer to draft the laws on your behalf. Then you can use the regional management UI to institute the laws.

The other common type of implicit contract are enchanted or artifact items. With these, simply equipping or wearing the item is enough to initiate the contract. Perhaps the most important example is the Ring of the King. Once someone with sufficient claim puts it on, they are bound by contract to fulfill the role of the king. This grants them all the benefits and privileges therein, but breach of contract means death and a land without leadership until the next person accepts the contract.

Next week we're going to back-track slightly and talk about the Skill System and Skills in Chronicles of Elyria. You'll learn how skills are categorized, advanced, and most importantly used to do or create some fun and amazing things. And, in line with CoE's design goal #3, you'll learn how every skill the characters use, requires some degree of player skill.