Professions in most MMOs such as Weaponsmith, Alchemist, etc. are pre-defined from the beginning. In keeping with our existing classless design principles, Chronicles of Elyria doesn't define specific professions. Instead, it encourages players to take skills from across different skill trees and combine them in unique ways in order to define their own professions.

As an example, if you're a Blacksmith with a specialty in making weapon blades, that also has skills in carpentry, and maybe in filigree, then you could rightly call yourself a Swordsmith. This level of specialization allows you to reach the higher crafting tiers in the areas you want, while ignoring those that you don't.

In this week’s design journal we’re going to talk about how Chronicles of Elyria reduces the barrier to entering new crafting professions and allows you to be a Producer from the start. We’ll also talk about the unique elements of crafting skills such as skill challenges, item specialization, component-based construction, and how we deal with non-renewable resources. 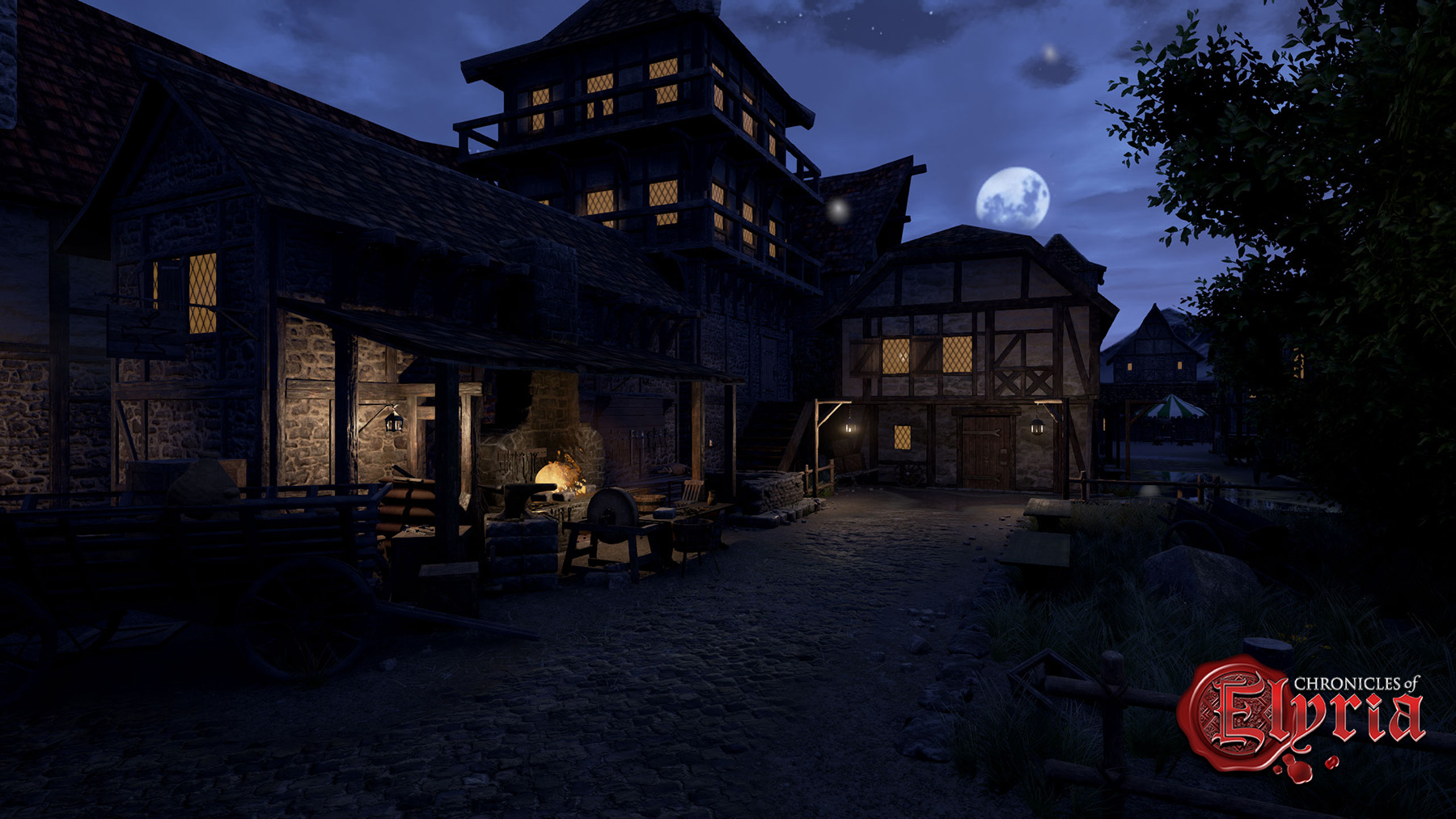 Figure 1 - The forge at night

Getting Started with Crafting

One of the problems you encounter in most MMOs is the inability get started with a crafting skill or profession. You want to a blacksmith? Great. But that requires money to buy resources, tools, and crafting supplies. In most MMOs this requires you to head out into the fields to kill a few bunnies, gain some coin, and then come back and sell off the vendor trash before you have enough money to do what you want to do.

In CoE, thanks to the power of contracts, we've mitigated this problem by offering apprenticeships and loans. Most villages or towns will have a resident expert in a specific crafting skill. If you go to them, they may be willing to offer you an apprenticeship. This will result in them providing you tasks that will help you develop the skills you need to improve. And, because they're getting free labor from you, they'll cover the supply costs for you. Once you move from Apprentice to Journeyman, many of them will even be willing to pay you for your service.

Finally, reaching the rank of Expert in a crafting or gathering profession will usually result in NPC loan agents being willing to grant you a loan to set up a small operation. They'll take everything you own as collateral, of course, but it means you can start your small business with nothing but your wits and dedication. As well, PC's may be willing to sign a loan contract even earlier than that if they trust your ability to pull a profit. But what really determines your crafting ability? Character skill? Player skill? Both!

The game breaks skills down into two fundamental categories: Combat Skills & Non-Combat skills. Regardless of the larger category all skills in Chronicles of Elyria require some degree of player skill. In the case of combat skills it's fairly obvious how character skill and player skill intermix. Timing, reflexes, and intuition have long been staples in traditional fighting games as well as aim based combat systems. Add onto that damage and reflex modifiers and you've got a hybrid combat system.

With non-combat skills it's a little more complicated. With CoE, we really wanted a system that went beyond simple progress bars and instead engaged the player in the activity they were performing. As a result, we've developed a dozen or so "Skill Challenges" which provide players an opportunity to demonstrate their capabilities within the specific skillset.

As an example, see Figure 2. In the Figure you can see a simple Blacksmithing Skill Challenge. Here, the player is required to cut out the shape of the axe blade they are trying to create. While it might not look like much, there's a couple things happening that may not be obvious. First, the more complicated the object, the more complicated the shape the player must cut out. Second, the higher the absolute difficulty of the object, the less time the player has to cut it out. Third, the larger the difference between the character's skill and the skill of the item, the wider or narrow the margin of error.

What's the end result? The better you are as a player, the more likely you are to attain higher character skill-levels. It should also be noted that several challenge types will be used across different crafting types. For example, blacksmithing, leather-working, and tailoring all use the stencil challenge shown in Figure 2.

In addition to the Stencil Challenge shown above we've got a dozen other challenges planned which will be used with different shared skill sets. We're looking at a musical, Guitar-Hero style challenge for musical skills, "find the item" type challenges for Tracking and other related skills, whack-a-mole type challenges for other smithy related tasks, and even "operation" style problems for first-aid! Want to remove the spear-head from your allies' wound? Don't touch the sides! 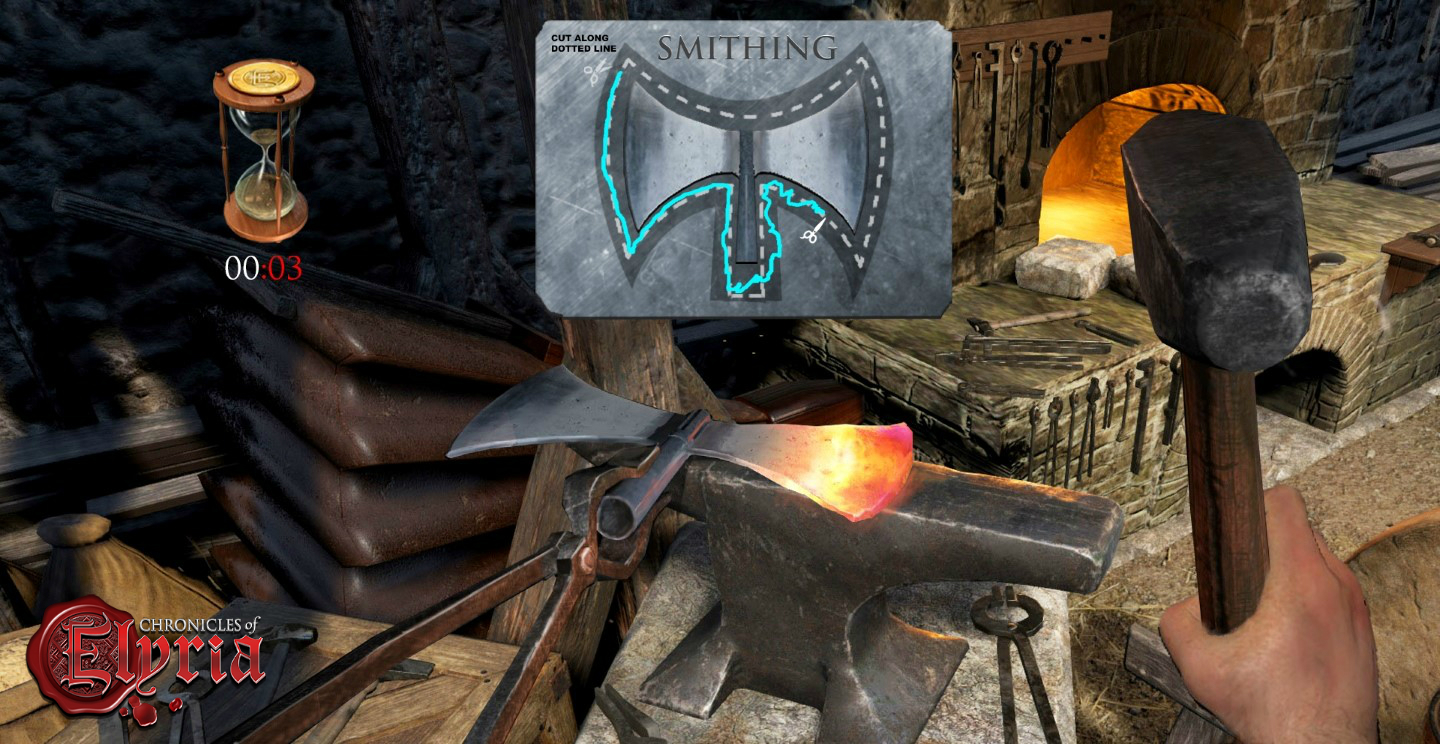 One thing we've done in an attempt to prevent endless grinding is to, in the case of crafting, provide item specialization. This means that you can become a master of crafting specific items, even before becoming a master at your specific craft or trade. This has to two fundamental implications.

This results in wasted time, and wasted resources. In Chronicles of Elyria, if you were to discover or learn how to make Recurve Bows, your success in doing so would of course be influenced by your overall Crafting Skills in Ranged Weapons and Carpentry, however there's nothing preventing you from jumping straight to Recurve bows and growing your skills on those. Of course, your early results may be horrible, but you'll advance quicker at developing recurve bows if you actually practice making recurve bows, than if you were to practice making short bows.

As with many other MMOs, Chronicles of Elyria allows the transfer of knowledge, specifically in the crafting skills, through recipes. Having a recipe and being able to read the language, grants you the knowledge necessary to attempt to craft something. If you also have sufficient skill you'll be able to reproduce the item. Unlike other MMOs there's a synergy between crafting and the Scribing skills, as those who have sufficient Bardic skill can create their own recipes to give to others in order to share the knowledge.

Chronicles of Elyria utilizes a component-based crafting model that both encourages collaboration and also allows Producers to specialize in the types of objects they want to create.

As you assemble the final product, you'll have the opportunity to swap out components for higher or lower quality components as desired. And sometime, changing the type of component, such as changing from a straight blade to a curved blade, can even change the type of item you're creating and lead to the discovery of new recipes or patterns.

Chronicles of Elyria also uses the concept of progressive construction or "value added". This means it's possible to take a simple item, either assembled or unassembled and make it progressively better by adding onto it. For example, you can take any standard blade and add a blood groove to it to make it lighter. You can also take any existing blade and add filigree, etching, or even serration.

The organic materials can be divided up into various plant and animal products. When harvesting plants you can generally gather the:

When harvesting animal parts you can often get the:

In all of the above cases the raw materials are processed by a Gathering skill to turn them into something consumable by different crafting professions. For example, those with the Mining skill are able to gather raw metals and then convert them into smelted ingots. Those with the mining skill can also use the Jewel cutting skill to take gems from metal deposits and cut them into jewels for use by jewelers.

In Chronicles of Elyria, the majority of crafted objects which require assembly can also be disassembled. There's a couple reasons you might want to do this.

First, if you decide later you want a better hilt on your sword, you can take it apart, put a better hilt on it and you're good to go. This applies to the component level as well. Don't like the ruby on the pommel of your sword? Take it off and put the shiny new sapphire on.

Second, many items in CoE suffer durability loss over time. While it's possible to take the blade you've been using to a grinding wheel and put a good edge back on it, that'll only work so many times. At some point, it'll be necessary to get rid of the blade entirely and put a new one on it.

One of the major problems in most MMOs is the need for a money sink. This sink is necessary because resources are unlimited. Metal deposits are constantly appearing as new resource nodes, animals are always respawning, and NPC villains forever roam the land with wealth that materialized out of thin air.

Most MMOs handle this problem, among other ways, by having resources destroyed during crafting. This is true whether you’re successful or unsuccessful. If you fail a skill check, you may lose some percent of the resources in addition to failing to create the item. If you succeed, you may get the item but the resources are still gone forever.

However, Chronicles of Elyria is a world with finite resources. Metals, gems, and other non-renewable resources can become extremely valuable as the game evolves. As a result, we’ve instituted a mechanic for recycling. Many materials, such as metals can be disassembled from their current object, such as taking a blade off a sword, and can be re-melted into ingots at a forge. In this way, many materials can be put to new use.

Rather than forcing you to sell the blade you just found to an NPC as "vendor trash", you can instead take the bad blade, put it back in the forge, and recoup most of the metal used in the initial crafting. In this way, you can continue to craft an item, advancing your skill, until you create a product at the quality you're looking for.

This week’s design journals focused on skills, skill advancement, crafting and professions. Next week we’re going to do a deep-dive into a specific set of survival skills to learn more about maps, cartography, and navigation!