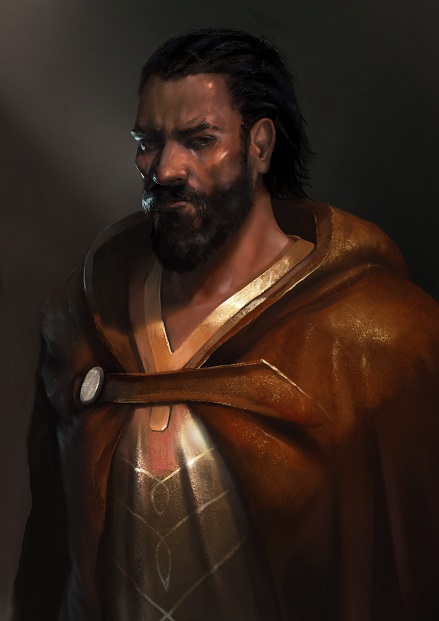 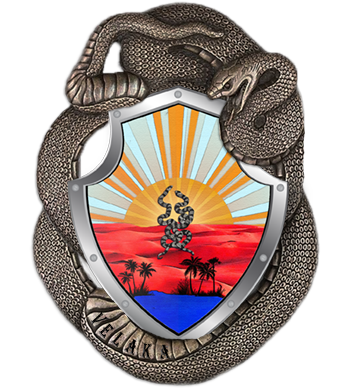 Two silver scaled serpents entwined with each other near a pool of sapphire blue water. Around the pool is a scorched colored desert with a glorious golden sun rising in the backdrop of a clear cerulean blue sky.

Velaka is a Role Play focused county. Role Play IS REQUIRED within the CAPITAL CITY of Velaka, and encourage for the other towns in the County. It's our wish that our immersion not be dissolved which is why we have chosen for the capital city itself to remain In Character at all times.

It's important that you be able to enjoy this game and play it how you wish, so if you are not interested in being required to Role Play we happily give the option to only encourage Role Play in the other cities and towns but not require it.

It's our interest in Velaka to focus around the military aspect of PVE and PVP with a secondary focus on lore. While anyone may play how they wish within the county, our focus will revolve around aspects of the game listed above.

Examples of things to do (But not limited to): Arms training, Muster, Guard duty, Patrols, raiding dungeons and lairs, hunting highwaymen/bandits going to battle in times of need, Studying the history of Elyria, writing books on history, religion, and simple knowledge bases, exploring the country for lost ruins or artifacts, the creation of maps, political aspirations, or more basic things such as farming, forestry, trading, and militia type duties.

It's our goal to make Velaka the defending arm of the Duchy while also being a place to place to attain knowledge. While to begin this will be simplistic lore, as the players choose their interest it may develop into something even more in depth such as Religion and Magic. It's up to you to turn Velaka into what you want!

If you have any questions feel free to reply here. Send a private message. Visit our Discord

The story of Velaka begins nearly a Hundred and Eighty years prior, with the destruction of the Slei'trhanis tribe.

The deserts were home to many a mystery, and as such coaxed adventurers and scholars alike to explore its dunes. While the scorched sands made life difficult for those folk who were accustomed to the more temperate weather of the cities, nomadic tribes wandered the desert lands proudly. These tribes had a policy to keep to themselves, as supplies were scarce and more friends meant more mouths to feed.

However, as these stories tend to go, one such scholar had a chance encounter with one such nomadic tribe.

The man now known as Cayene Li'i, or "The Memory Keeper", is the scholar of our tale. A collector of histories, Cayene spent his days travelling far and wide across the continent, recording what he can of the locals' backgrounds. On this particular day, Cayene found himself crossing paths with the nomads called the Slei'thranis. The Slei'thranis were known throughout the desert lands for their keen sense of finding oases to sustain themselves as well as their hardy flocks of goat and sheep. Cayene had not been fortunate enough to find an oasis, and time was not on his side. His skin ached, and each bead of sweat that dripped to the sands below acted as another reminder of his thirst. It was then, during the heat of the day, that Cayene found himself at the threshold of the Slei'thranis' camp.

It was not uncommon for Slei'thranis to set up camp during the day when the sun was at its most brutal. To them it was a logical survival measure. Cayene started to pass through the encampment, which a man said to him, "shade and water". While this is a standard greeting amongst Slei'thranis tribesmen, Cayene took the words literally, and assumed that this man was offering him shelter. Overjoyed, Cayene rushed past the man into his tent, and started draining the precious water from the man's coveted drinking horn. Outraged, the man grabbed his spear and, with honed precession, knocked the drinking horn away form this bold stranger. Theft of another's water was a high level crime among the Slei'thranis, but this was another aspect of the tribe Cayene had not learned yet. Confused, Cayene apologized and explained his situation and his purpose. The tribesman, who went by Lazdolf, granted the traveler leniency, and gave Cayene a chance for repentance. Cayene responded by taking out a small tome of his pack and saying, "My most valuable possessions are my stories, and they are everlasting".

Lazdolf was intrigued by this offer, since the Slei'thranis did not have a written language, but instead relied on the use of oral histories to navigate their past just like they used the desert stars to make their way from oasis to oasis. Lazdolf accepted, and Cayene started reciting his stories. As the desert sun descended behind the dunes, more and more of the Slei'thranis tribe gathered in and around Lazdolf's tent to hear what this far-off stranger had to say. The stories were just as enthralling as the Slei'thranis own campfire tales, they thought. Lazdolf knew this was different, since Cayene was not speaking with his mind like they do, but instead looking at the knowledge embedded in the pages. The tale ended, and Cayene closed the book only to find Lazdolf remaining. Lazdolf took the tome from Cayene and examined it, curious how so many memories can be contained in such a small space. "You shall travel with us until we should part, " Lazdolf declared, "and you will tell us these words of history." Cayene was overjoyed to spend more time with the Slei'thris tribe and agreed immediately.

The Slei'trhanis travelled from oasis to oasis, and during this time Cayene filled their minds with stories and histories just as the oasis filled their drinking horns. Some of the younger Slei'thranis pleaded with Cayene to learn this art of preserving memories on parchment and Cayene obliged. These literate Slei'thranis worked with the tribal elders to record what they could of their tribe's own history. It was a prosperous time for the Slei'thranis tribe, and the very beginnings of the histories we know of them today.

But once again chance intervened. This time, instead of an eager historian crossing paths with the Slei'thranis, chance took the form of another desert tribe; a tribe who was not as peaceful as the Slei'thranis. They were known as the Durafi. Among the desert tribes they were known as "The Ones who Seek Red Sand", which referred to their penchant for bloody conflict. What the Durafi did to the Slei'thranis was brutal. The gamut of violations against another person were executed tenfold. But the Durafi were not just blood thirsty. They recognized opportunities when the presented themselves, and took slaves of the Slei'thranis to bring with them as they traveled. Among the few spared, Cayene and Lazdolf were taken due to their obvious mental acuity. The Durafi knew just how valuable literate slaves could be in certain noble circles.

Months of travel lay ahead the Durafi and their slaves, leaving the deserts behind. Near the Durafi's destination lay the Duchy of Ravencrest. The Ravencrest considered themselves to be an enlightened lot and this particular section of the Duchy did not fancy slavery in any of its forms on their lands. The Durafi clearly did not respect borders and wanted to cut through Ravencrest lands on their way to sell off their remaining slaves. Men from the Duchy came bounding into the Durafi's path and, with the Durafi feeling threatened in foreign lands, decided to make and example out of these so-called warriors. These Ravencrest knights had the advantage on the Durafi in terms of equipment, but the Durafi craved gore and war.

It was a gruesome battle, with blood from both sides staining the countryside. But in the end the men of Ravencrest prevailed over the tribal fighters.

Cayene and Lazdolf, who survived these atrocities along with a small number of other slaves, were brought to Ravencrest and given an audience with the Duke: Lief Corvus. The pair explained to Duke Corvus of their harrowing journey, and the Duke felt sympathy towards the lot from the desert. He bestowed upon the former slaves a plot of land. In order to preserve the history of the tribe once called Slei'thranis, this land was called "Velaka" which means "remember" in the old Slei'thranis tongue. Lazdolf, now associating his name with being a slave in the past, created a new surname of "Slethran" as a way to both usher in a new age as well as hold on to the traditions and ways of his now decimated people. Together Cayene Li'i and Lazdolf Slethran forged a county dedicated to remembering the ancient ways and preserving the histories of it's citizens and the world around them.

The goal is to make our Capital City, Slei'thranis, Role Play Required. Meaning that anytime you are in this city you will be able to immerse yourself into the story. For those of you who are simply interested in part-time Role Play, we understand and accept you as well! Only the capital city is it required to Role Play, anywhere else in the County is up to you.

We will have laws and standards that encourage the growth of Role Play and punish those who purposely break immersions and try to troll. (These particular laws are only active in the Capital City itself) The laws will not hamper a new or inexperienced Role Players, but make it easier for them to jump into the immersion!

So if you are interested in Role Play, regardless of your experience, give us a shout and visit our Discord. Ask for Sardolf Slethran!

Looking to find some folk who are interested in writing short stories. Topics can be anything, from history, myth, religion, beasts, locations, heck even cooking recipes or crazy rambling stories about nothing. Let me know if anyone is interest.

Joining the county is not a requirement for those interested in contributing.

Thanks to those who have PM'd me their stories with interest in having them made into books in game!

Just gonna bump this. Still looking for anyone interested.

Now actively looking for interested parties looking to join the County of Velaka. Message me for anything you’re curious about.

Velaka is now ready to start expanding our military arm of the County. Actively looking for Barons.

We are still gladly accepting Mayors and any individuals interested as well.

Looking forward to seeing more from your county!

As always we continue to remain open for those interested.

Bump up, bump up!