The Duchy of Genera

The Duchy of Genera is located in the wetlands of Caprakan, it’s rich history is matched by it's equally rich, fertile land and the prosperous To'resk people who call it home.

Ruled by by their Duke Kov Generex, the people of Genera have a mostly peaceful existence in the wetlands, protected by the challenging terrain of the wetlands, which even Generans must learn at a young age to respect. However, the wetlands provide bounty and peril in equal measure, and the Generans have learned to take advantage of their home’s gifts, becoming masters of aquaculture, growing crops in the fertile soil beneath the water as easily as on dry land, providing consistently bountiful harvests to support their ever growing population. With the land both protecting and providing for them, the Generan people have prospered, and their capital city of Port Genera is a world renowned centre of science, trade, art and culture.

I am a care bear by nature, and those are the parts of this game that most appeal to me personally. However, I am well aware that a duchy cannot prosper if it’s focus is too specialized, as a result, where others have chosen to adopt aspects of real life cultures as the theme of their domains, I decided early on that my aim would be to keep Genera as generic possible, hence the name.

So what does that mean? When you come to Genera, you are free to pursue any theme or play style you like within the law of the land. Those laws will be kept to a minimum, designed only to keep the peace, and ensure the duchy is prosperous and safe for our citizens.

The official game lore will be respected as well, but only as a starting point- it defines how this world came to be the way it is, but we the players will determine how it progresses from launch day onward.

Recruitment is underway! Looking for... everyone!

What I hope to build here is a community of mature, dedicated players, who will not only make Genera prosperous and successful, but a really fun friendly place to live your Elyrian life. Genera needs people capable and passionate about all aspects of governance and game-play; I want us to be able to fulfil all our needs internally, while contributing significantly to the kingdom. We will need warriors, farmers, fisherman, builders, scribes, smiths, carpenters and every other profession in CoE, as well as schools, guilds and other organisations.

In short then, we need a bit of everything! With this in mind, Genera opens it's arms to people of all ages, races, nationalities, genders, sexual orientations, people with disabilities etc. But at the same time, we will fight any toxic elements and drive them out.

Genera will be home to many leaders, invested both financially and emotionally in the success of their characters. I would be a fool not to include them in the governance of the Duchy!

There will be many day to day decisions to be made, and it will likely not be practical to discuss every single one of them with everyone affected. In all instances I will attempt to make the best possible decisions I can, and try to bring the relevant issues to the Council. When I get this balance wrong, as I surely will on occasion, I will always be willing to revisit my decisions.

It is expected that we will all work together within the Duchy, in pursuit of our common goals, and as long as this is the case, Counts and Mayors are free to run their Counties and Settlements as they see fit.

Towns not yet in a County

Congrats on becoming a Duke.

wipes away the tear

I look forward to working with you for the betterment of the Kingdom. :) 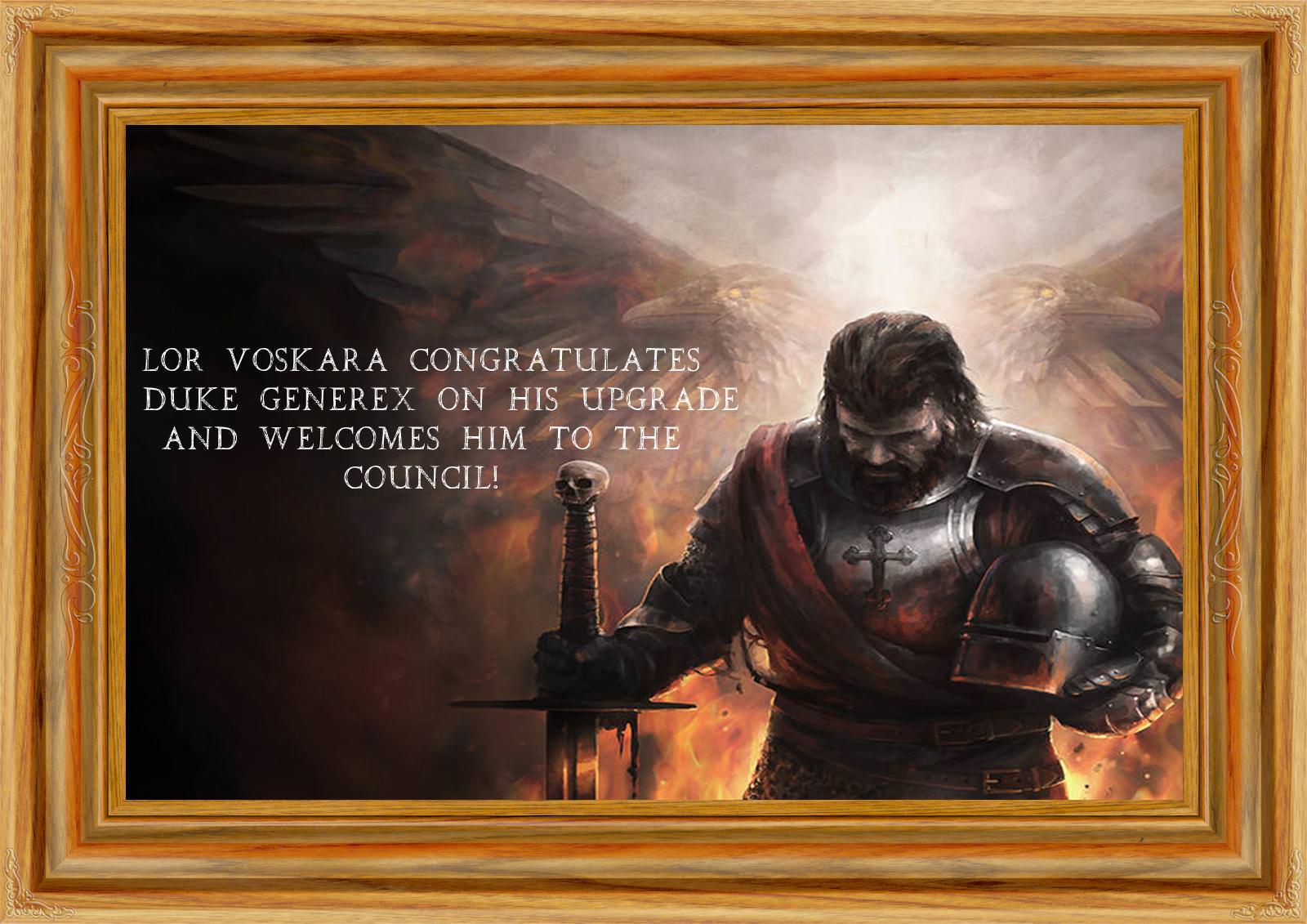 Recruitment for the Duchy is back underway! Now that everyone in Caprakan is settling in, it's time to get thing moving for Genera again! Come by the Caprakan discord and say hi, I'm usually not far away.

Updated, now that i have some info on members of the Duchy in the second post, and the official Crest of Genera, courtesy of Counselor Coyotl Bedwenarian, in the first post. Many thanks Coyotl!

Love the post and crest. Look forward to seeing your Duchy grow and prosper.

A wonderful duchy, proud to belong to it, and looking forward to seeing it all grow! :D

We've made some changes to the way we run things in Genera. Council membership is no longer connected to pledge package in any way, but based on merit. I also removed the Town Hall Meeting 'requirement' in favor of allowing Counts and Mayors to run things the way they want to. Also made some minor edits to try to more clearly explain what Genera is all about.

I fully expect things to continue to evolve as time goes on, so if you're on the fence about joining Genera, now might be a good time to jump in with your ideas and get involved with that evolution! The newly formed Council will be open to ANY member of Genera who wants to be part of it, until the end of this month.

I’ve been a Mayor in this Duchy for quite a while.

I want to devote my self to the sea, and to Genera’s waterways. I want to build a Navy, build a Port and roam Genera’s Seas, Rivers, Shallows. Lakes and Streams.

I love how free this Duchy is. Duke Kov Generex’s dream is deliberately wide and free; so that we can all play diversely together, under Genera’s banner.

I’ve just upgraded to a Count’s title. So I’ll be placing on our Duchy’s North Coast and devoting my energies to building a Port, researching shipping technology, and to fostering our Shallows, River and Ocean Military Navies.

So if you feel like Aquatic Adventure; on Genera’s Rivers, Deeps or Shallow Seas then join me on the north coast; or if you’ve a different dream join Genera and let’s work together.

May the Dream of His Grace Duke Kov of Genera flourish always on Genera’s waves!