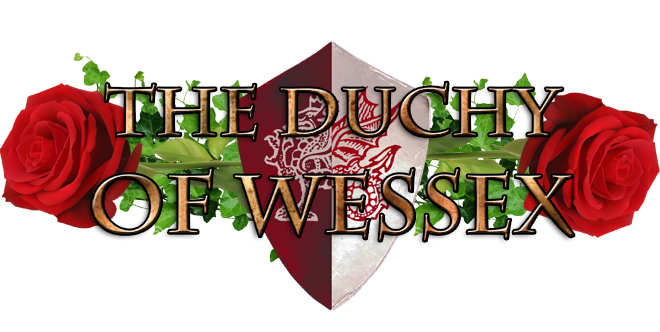 Kingdom: The Kingdom of Valyria

Point of Contact: Wessex Elyria Discord You may PM me here or DM to Duke Oriens/Manus Dei of Wessex#4315 on Discord.

Website: The Duchy of Wessex (Site is old, so you will need to activate Adobe Flash)

I, Manus, by the Grace of God, Duke Palatine of Wessex, Count of Elba, Baron of Swanstone, Grandmaster of the Solar Legion of Honor.

As Manus Dei, founder and leader of the Duchy of Wessex for nearly twenty years, I will be returning to lead the Duchy of Wessex in Chronicles of Elyria. As an accompaniment to this leadership role, I have also been offered the position of "Hand" or viceroy to the Crown of Valyria, which has accorded me royal and executive prerogative in the Kingdom of Valyria, second to His Majesty, the very capable King Matthias Valen of Valyria. Wessex intends to continue its tradition of fully engaging in the strategic and nation-building aspects of online play, which is now being called the "Dance of Dynasties," in Chronicles of Elyria.

As this post serves as a call to the recruitment of able captains, leaders, and soldiers who would pledge to the banner of the Duchy of Wessex, I should like to share something of my philosophy of leadership in wargaming. The following item was an interview conducted for the last game in which we were involved, and may be of interest. 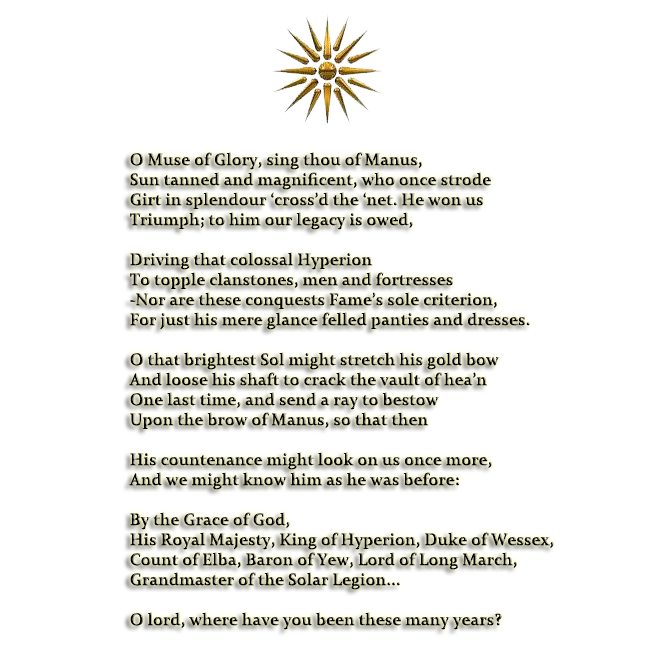 -Lady Sempiternam de Medici, Herald of Wessex, as cited from Life is Feudal

Because Wessex has been enjoying games in this particular pvp/strategy MMO genre for nearly twenty years, it brings to the table a weighty experience and familiarity with interclan politics and strategic achievement. The Duchy of Wessex is best known for its involvement in the 2009 game, Darkfall Online. During that game, Wessex was the foundation clan of the "Kingdom of Hyperion," which grew to more than 5000 members and more than 80 sworn vassal clans and subclans. At its highest point, Hyperion had conquered nearly half of the world map for the entire game of Darkfall Online, including 28 cities.

Hyperion was an endeavor which took four years of preparation, and involved daily organization on the level of a corporation. Its leadership consisted of the most brilliant and capable minds I could find, including a US. Military Field Officer, a Wall Street financier, a Silicon Valley tech CEO, and a Harvard professor. When we moved to take over the world, the achievement was affectionately remembered as "Darkfall's World War," and was followed by weekly articles at MMORPG.com, some of which are shared below.

The Duchy of Wessex also had memorable time spent on 2003's "Shadowbane," where it allied with the famous "Lords of Death" clan from 90's Ultima Online to face down an elven alliance in the early days of the game, and ultimately settled on the island of Elba under the leadership of Drayke Whitewood, which became its own meme for a time. "For Elbaa!!!!!!111!1!"

Wessex also may be known to some of you from Mortal Online, when it was led by names like Kaylem Sothenic, Wooster Redwood, Bastor Sharpeye, Otto Osterwind, or Azzerhoden Razeri.

Most recently, the Hyperion Kingdom itself was reassembled for Life is Feudal, including mainstays from the Darkfall era like the Silver Sun Republic and the Homeless/House of Khans. In Chronicles of Elyria, many storied Hyperion clans from the past will be returning to help populate the duchy, including a county held by the notorious Society of the Anvil and its leader, Surly Spitforge von Fishbarrel.

A Duchy Founded on Feudalism

With the history of the clan having been shared, it is now fitting to illustrate what makes actually playing in the Duchy of Wessex unique. Beyond the legacy of conquest and achievement, Wessex has always been about the immersion of the gaming experience for individuals. From its inception, Wessex has endeavored toward the ideal of not only winning and influencing, but of doing so while creating a working feudal state. It isn't enough to rule pixels and digits - our continuing dream is to feel like we are creating stories in a real world! Time has shown that each successive game that is released brings us closer and closer to mechanics that support this vision, and it seems that Chronicles of Elyria is the most ambitious game of all in that respect.

Although we welcome the current changes Chronicles of Elyria is making to the concepts of clan and "guild" in a game, in the times when people still understood gaming "clans" as something more akin to sport team mascots or turf gangs, Wessex was already arraying itself as a territory and a nation. The institutions that make up the Duchy of Wessex's governmental system are based on legitimate historical conventions and have become integral to our gaming culture over the years. Our history is authentic; our details of feudal styles and forms of address are impeccable. Our forum records of numerous oaths of fealty, deeds for noble titles which convey the sense of real rulership and responsibility, and ceremonies of knighthood bestowed for real combat heroism all make up the ongoing lifeblood of Wessex and Hyperion gaming memories. All of our structure is already in place for the new dynastic and feudal mechanics of Chronicles of Elyria - it's been anticipating them for two decades.

Whether you're a county, a barony, or a gifted and enthusiastic individual player, we'd like to invite you to be a part of it. In Wessex you can truly have a career and become elevated to even the highest levels of nobility by your talents, wits, and dedication. The current counts of Launceston and Yorkshire, pledge holders for CoE, began as regular peasants in Wessex and were promoted up over the years. If you're a mayor we can make you a baron, and if you're a baron, we can aid you in attaining succession from an NPC count in order to claim a county of Wessex in your own name.

True to medieval society, Wessex society is made up of four social classes. They are the nobility and gentry, the freemen, the bonded peasantry, and the clergy. In adapting this longstanding feature of our structure to Chronicles of Elyria, we are classing as "gentry" anyone who bears a coat of arms, regardless of if they actually own land or not. Non-armiger landowners are classed as freemen until they can gain arms. Those who rent are classed as bonded villeins.

The goal is to not just populate and account for all the roles that constitute a working medieval society, but to do so in a way that does not create superfluous fluff. Every role must be necessary and have legitimate tasks to do instead of being simply atmospheric - at least in the Ducal Court of Wessex. The individual manorial and county courts are left to their own devices, and may have whatever sinecures they wish, so long as they adhere to the simple formula of nobility, clergy, freemen, or peasantry.

The Ducal Court, however, consists of a cabinet with positions that can be held by lords who are also ruling counts or barons. Each of the Cabinet Ministers administers a portion of the palatine power over the entire Duchy of Wessex. When a minister is absent, other ministers will fill those responsibilities as circumstances require.

The Duchy of Wessex requires thorough examination and interview with all appointees to the above positions, and indeed most appointments to the ducal court. These examinations are a staple of Wessex culture and they have been standardized into differing grades in order to appoint only the most scholarly, learned, and most importantly, dedicated of officials.

The following guide consists of customs and structures which have been used by Wessex in the past, and some of which may be carried over into Chronicles of Elyria: A guide to the Duchy of Wessex

Wessex, and by extension, Hyperion, has always had a homegrown religion based off of the ancient cult of Sol Invictus. The sacred clerical institution of the Duchy of Wessex is based on the worship of the Sun, and this imagery informs much of our heraldry and our theme. There is a church organization within Wessex whose structure is authentically modeled on the early Catholic church, and by its exclusion from the feudal structure of oaths between lords and vassals, is afforded a measure of power in the medieval society Wessex recreates. Wessex will likely be adopted to appropriate Elyrian religions.

Roleplay in the Duchy of Wessex has always been of a very specific flavor. In fact, I have never considered myself a roleplayer per se - running a duchy or a kingdom of 5000 people is so consuming a task that one's character and one's self are effectively one and the same. We aren't "roleplaying" that we're administrating - we're really doing it!

This same sentiment extends to every role in the duchy. For years we have all wanted a game that was so immersive that by simply playing it and doing everything you needed to succeed, you would be playing a role ipso facto. Chronicles of Elyria just might be able to provide that. When we find ourselves owning real land in game, building on it, protecting it, and naming our characters and establishing a family legacy because of it, our "roleplay" will be intrinsic to the game itself.

This is the kind of "roleplay" that Wessex has always supported. It's the literal playing of roles that game mechanics support, and not wasting time on "staged" stories and events that are inconsistent with the real goals of the game. With that said, we still respect customs and ceremonies like the Accolade of knighthood, the awarding of medals, and the proper use of forms of address and diplomatic courtesy - not because it's a staged scene, but because it's part of the culture of respect that decorates our immersion.

With all the new depth provided by Chronicles of Elyria, from the new meaningfulness of titles to the dynastic heritage they represent, Wessex has never been more excited for a game to play. It's the game we designed our historical feudal clan for years before its existence was even a possibility. And now that it is a possibility, we invite players like you who share our dream of what virtual nation building can be. No matter what your commitment or pledge level to Chronicles of Elyria, we would love to welcome you to our website, Discord, and forums, as found on the links below.

Given by My Own Hand, 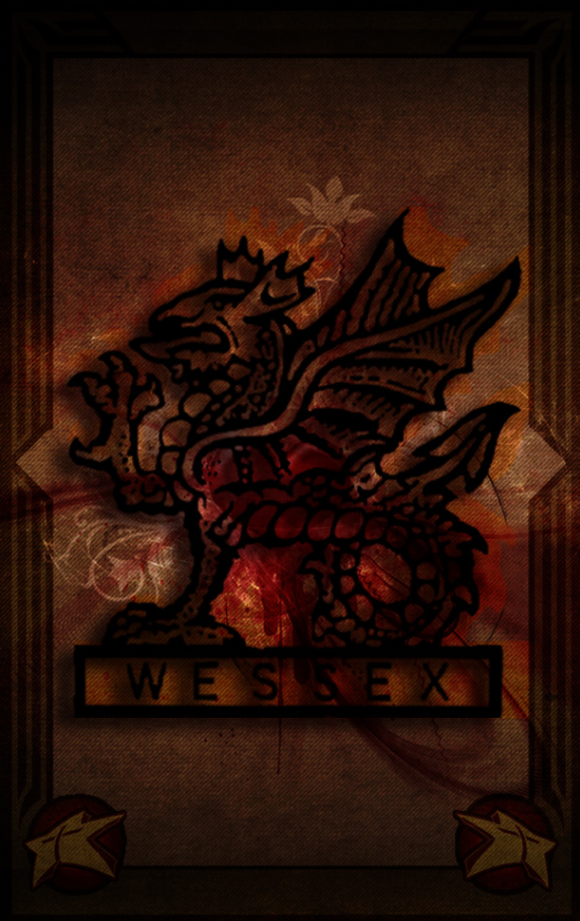 You know me as Meso'Clan from Life is Feudal and I want to pledge to the banner of the Duchy of Wessex.

It is good the see Wessex coming here!

It is good the see Wessex coming here!

I‘ve been waiting for them to show up for so long, that I totally missed it when they finally did.

Ping will kill me, but I’ll make sure to roll an alt there. Wessex and CoE always seemed like the perfect fit to me.

Thanks Hugiz, that should be fun.