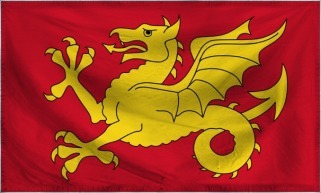 The question revolves around the question: Will population boosts due to multiple titles effect the population of a multi-domain, in order to re-balance the total tribal percentages enough to allow you to play a minor tribe?

There are 2 counties (Each with one town) with 10 people per county. One county (County A) has 50% Neran, and 50% Weard, and the other (County B ) Has 100% Waerd, this would mean the domain of both counties have 5 Neran, and 15 Waerd. In this case Waerd dominates, and Neran only has a 33% population compared to the Waerd. Normally this would mean you could NOT play Neran.

However, If you had multiple titles/villager tokens, say 100 villager tokens. This would add +100 population to the settlement you choose. If you choose the town in County A (50% Neran, 50% Waerd), The total population would now be 110, 55 Neran, 55 Waerd. Adding this to the total population of both counties, you would have 55 Neran, and 65 Waerd. This means Neran has an 84% Population Representation compared with the Majority Waerd in the dual county. In this case, the rules say you CAN play as a Neran.

Back to the question:

Will this method work in DSS to allow high token/multi-package counts to potentially boost the numbers in this way due to their tokens/packages in order to open up the option to play as a minor tribe, as in the example mentioned above?

I have done a few calculations regarding this, please see below: 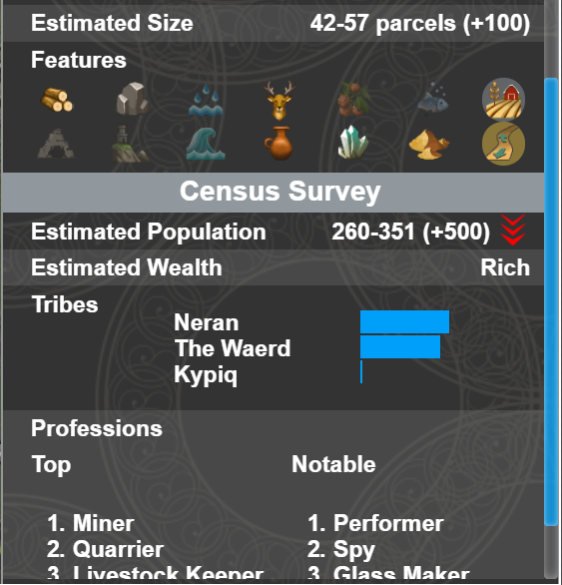 Now for the calculations:

This table is with numbers without the +500 boost. According to this table, neran only has 68.8% population representation compared to the Majority tribe. This means I CANNOT play Neran.

Now, WITH the boost:

As you can notice, I have applied the +500 population boost to county 3's sole settlement. Now, according to this table, the neran now have a 78.3% population representation compared to the majority tribe. In this case, I CAN now play as a Neran.

With this, the question I am looking for the answer to is:

Thank you for your time in reading this.

I'm speculating here, but judging solely by the UI, you would be bound by the current population distribution of the combined counties at the time you claim them. On the D&SS map, the "claim" button exists at each tier.

So the question is which happens first? Claiming the settlement or claiming the county? If you claim a county first, then how you impact the population of your settlement won't matter, and frankly, it seems like it should.

In the live stream, they said they were deliberately leaving the claiming process vague so we would discover how it worked once D&SS resumes. If we don't get clarification, I'd suggest just having a plan A and a plan B and then having your duke explain the selection sequence to you as well as the affect on population distribution, since they will be claiming long before you will.

I heard that we do not pick our tribe until later on, will population changes due to these boosts or additional villager tokens have an effect up until we pick our tribe?

OK, I discussed this with the team today.

This means that if you're careful and precise about your choices, the way HeartOfIron is suggesting, you can, in fact, swing the distribution of tribes represented in the population of a county, so that one tribe has more representation after your pick than it originally had.

However: While you make your tactical choices like this, please remember quality of life: A tribe that is not adapted to life in that biome is going to be uncomfortable and not nearly as happy as a tribe that has adapted to that biome. So if you figure out a way, for example, to fill the desert with Brudvir (you actually can't but it makes a good example), you will be filling that desert with a bunch of sweaty unhappy wolf bois who may not appreciate their lot in life. If they're sufficiently out of their own element, that may motivate them to leave.