Welcome to the Chronicles of Soulbound Studios: PAX West Edition!

As mentioned in Kaizen's introduction to our Jousting Quest, nearly the entire team has turned their attention to bringing the work of the last six months into an experience that PAX-goers can appreciate. We expect that we'll have visitors at our booth from existing backers to people who have never heard of us and everything in between. MMOs are historically difficult to show at PAX and other consumer expos because a player's journey is measured in years, not minutes or hours. In the few minutes most people spend at any individual booth, most wouldn't even get past the character creator in any given MMO! So we are targeting an experience that will delight everyone and reveal the possibilities that Chronicles of Elyria will bring to its players in the full game.

After much debate internally, we went with this jousting experience because it entails next-to-no throw-away work. That is to say, we're not making jousting just so that we have something cool at PAX West. We're making jousting because we were going to do it for launch anyway (jousting does not count as the Mounted Combat stretch goal, just a mounted attack) and it is a focused experience that shows off our work really nicely. To that end, the demo has been coming along crazy-fast! Here's what each adventuring group has been working on:

Almost as soon as the jousting idea left the conference room, the Vanguards leapt into action and the first draft of the tiltyard was roughed out in under a week. Because of the efforts of the Society of Elyrian Ecology, representing the biome's flora was quick and easy. Knowing what resources were available in the biome also made it easy to determine the look and feel of the structures and the materials they are made from. In this case, primarily lumber. 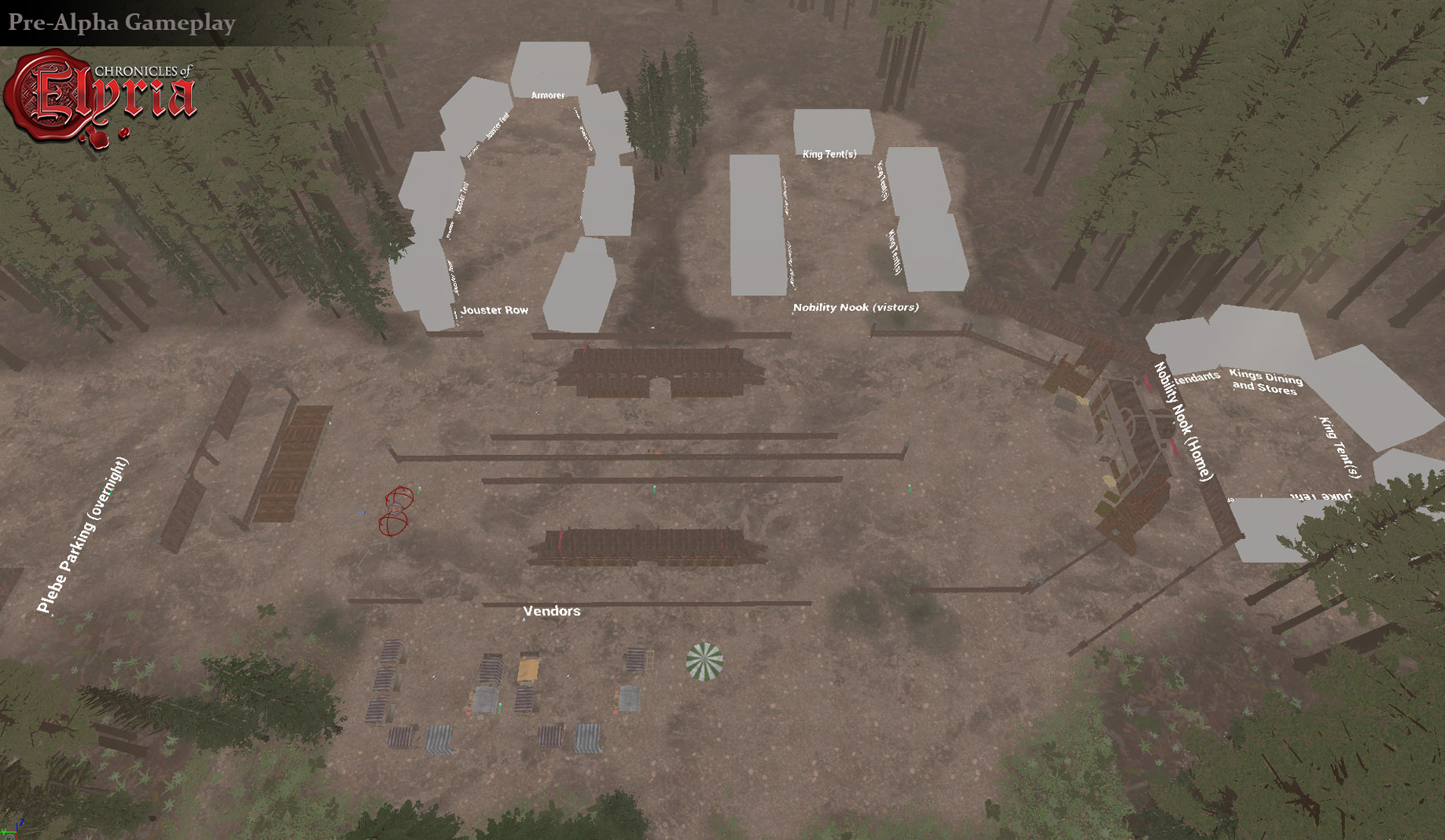 Ultimately the length of the tilt (the fence the horses joust along), the distance between the tilt and counter-tilt (the fences that keep the horse running relatively straight), and the collision of everything in the level was led by design and engineering needs, but making it look Elyria Good™ is all up to this group!

After Raevantiel made the ground in the yard muddy, Wiz created mud-splatter VFX that fly off the hooves as the horse trots around. Heat provided paintovers of the tiltyard that showed the home-team's colors and helped to support the narrative of this space: that the tournament grounds are still being set up and the knights are here early to practice. Vandermast has been working like a madman making sound effects for walking or running in the mud, riding the horse, lances impacting shields and armor, all the ambient sounds of the region, and more! Each and every day, the environment for the tiltyard becomes better and better. With still a couple weeks to polish, I'm certain that the level will represent Chronicles of Elyria well. 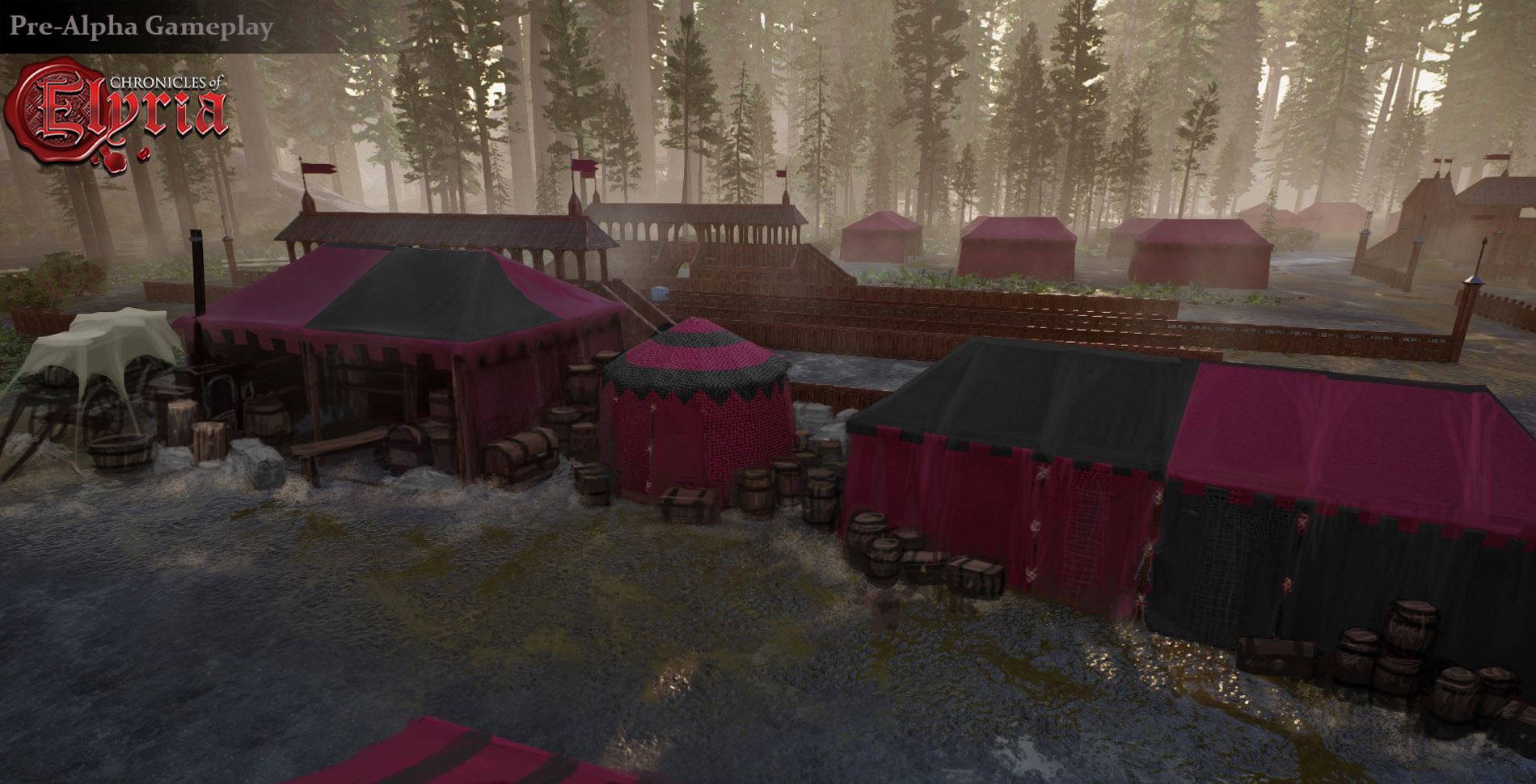 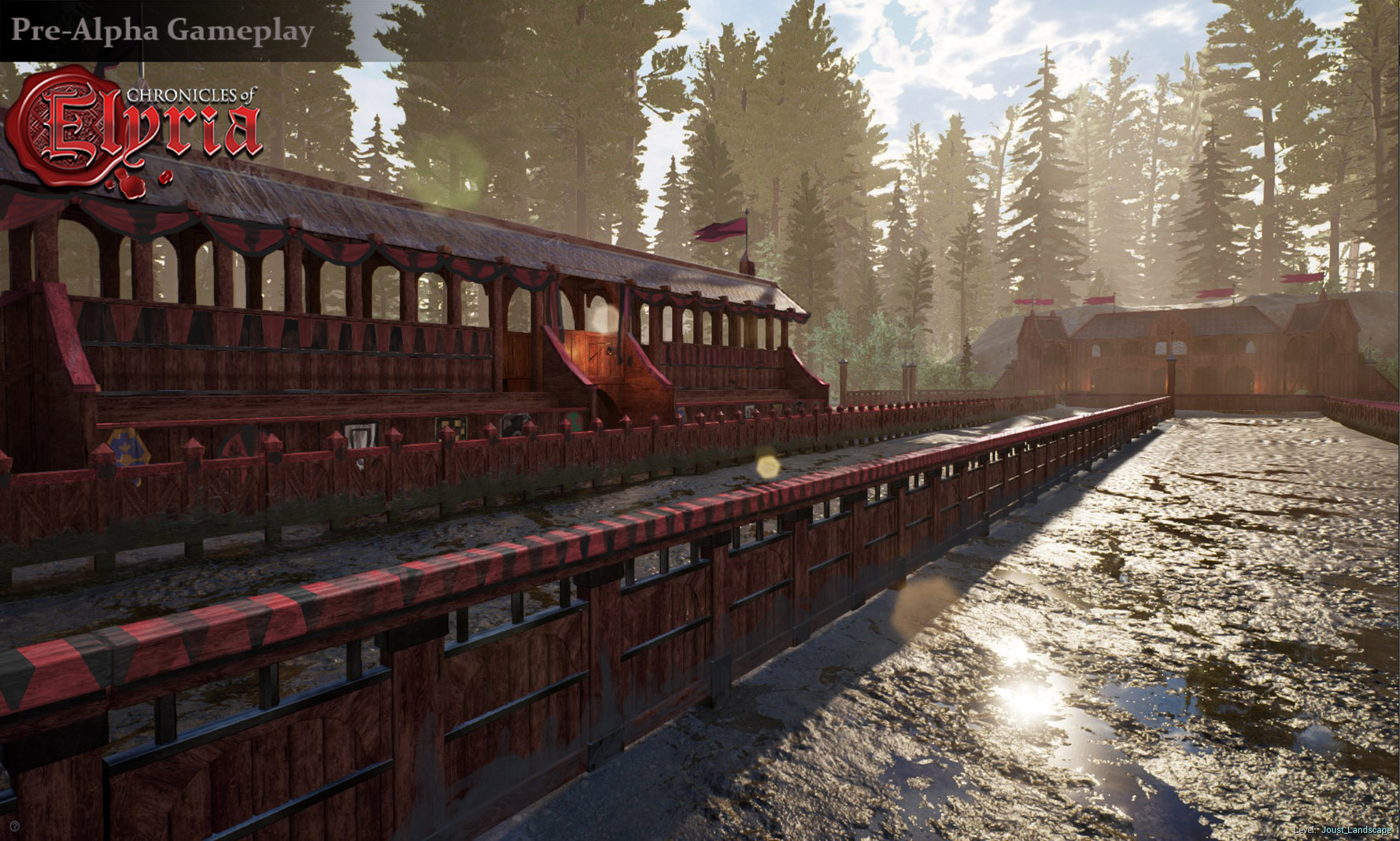 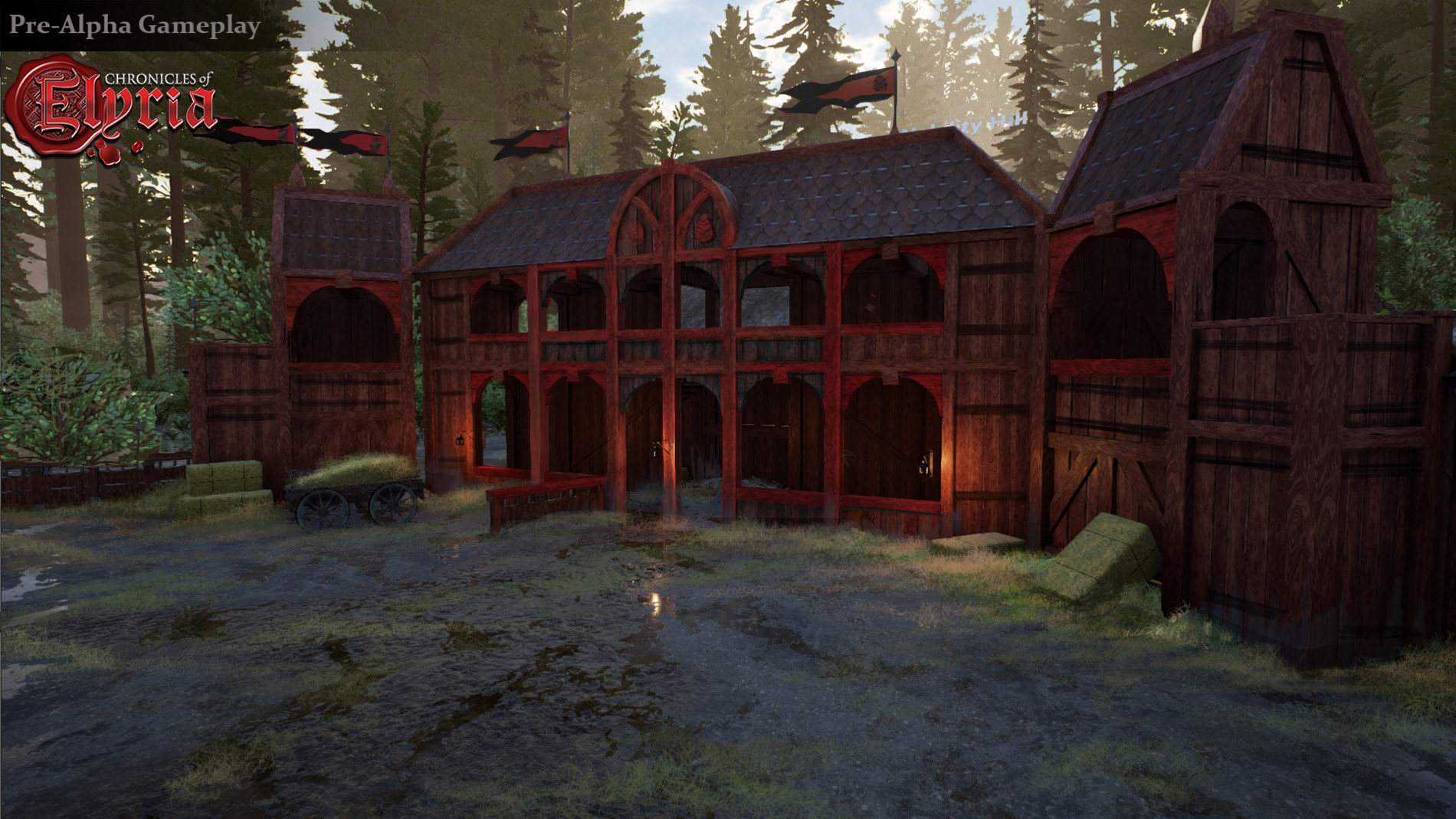 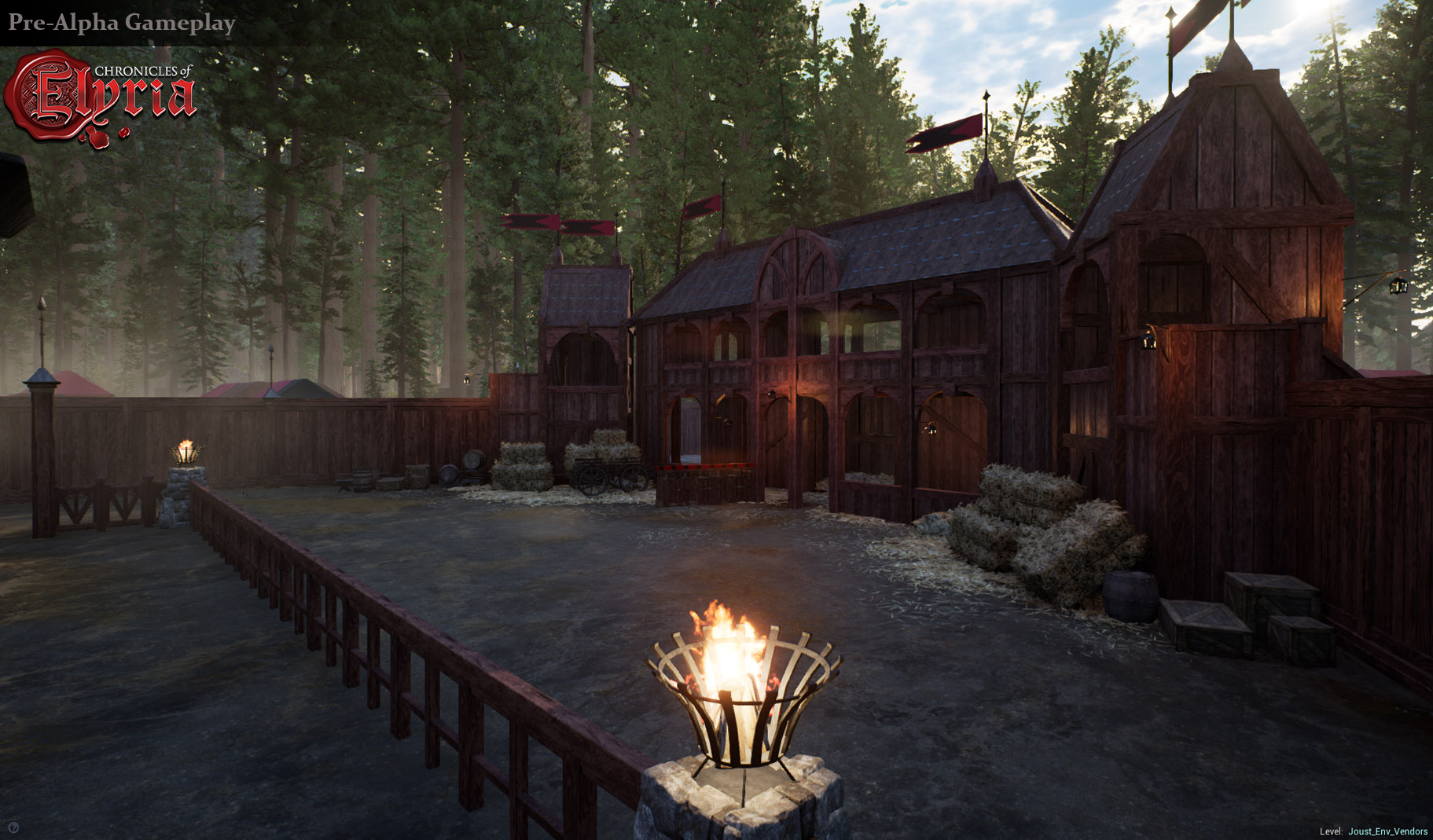 Side-by-side comparison of a paintover and in-game result

There will be six sovereignties riding in the jousting tournament:

Each has sent knights to the tournament and so we'll need some variety in their equipment. Some of the variants that Heat concepted were chosen for modeling and now we can assemble the knights from the various pieces, colors, and patterns so that each has a unique set of armor. It goes without saying that players of game at launch will never be restricted to just the armor sets that Soulbound creates since our crafting system will allow players to create their own variants from the modular parts, textures, and colors.

Some adornments on the helms could also add to the variation, and Heat threw together a few ideas for the party to choose from. These are hot off the presses, so I can't say which of these will make it in for the expo, but you can still get a great idea for the types of adornments we're aiming at including in the launch product.

Those are flower-cup porcupine quills on the fourth helmet, trison horns on the sixth helmet, and ursaphant tusks and fur on the seventh helmet

It's not all about looking cool though. A shield is necessary for a joust as well, and a concept was quickly sketched by Heat and built by Irreverent. The cutout on the shield is a pass-through point for the lance when it has been lowered into position. 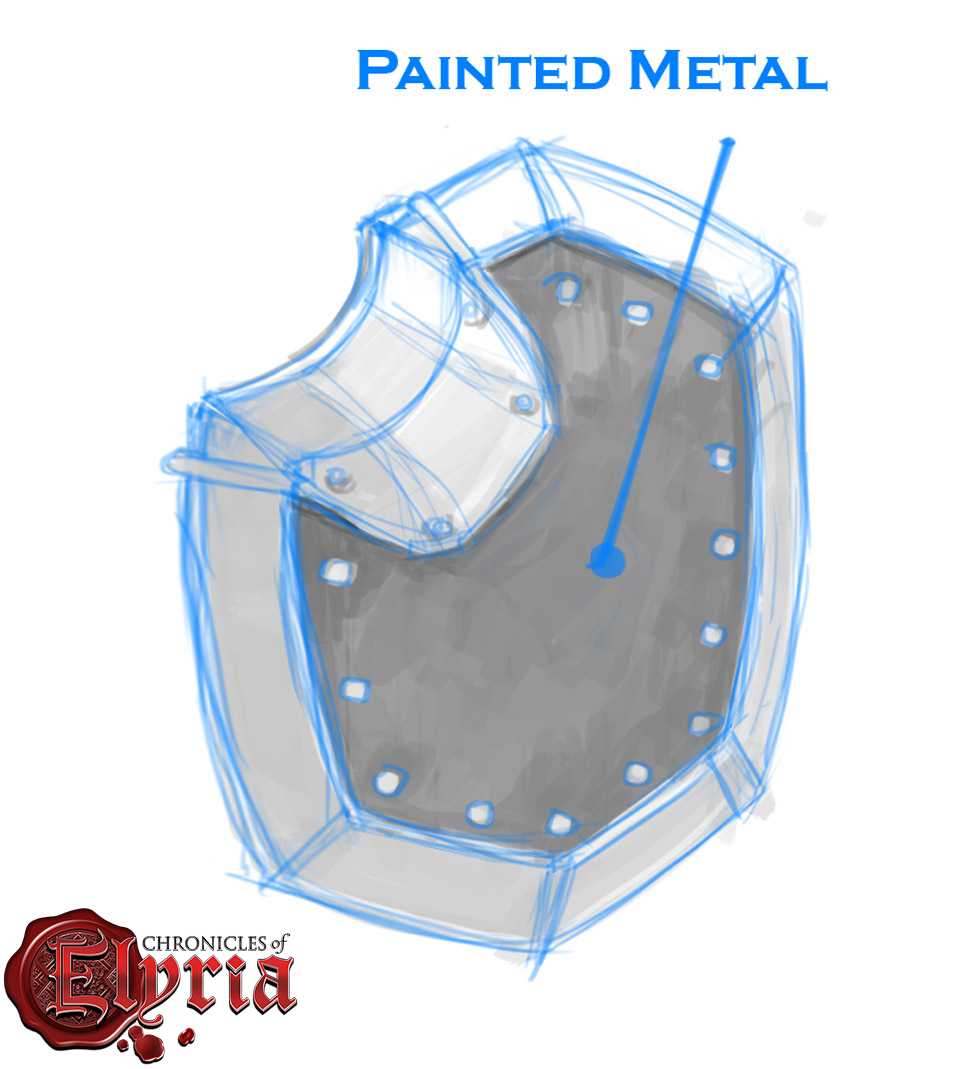 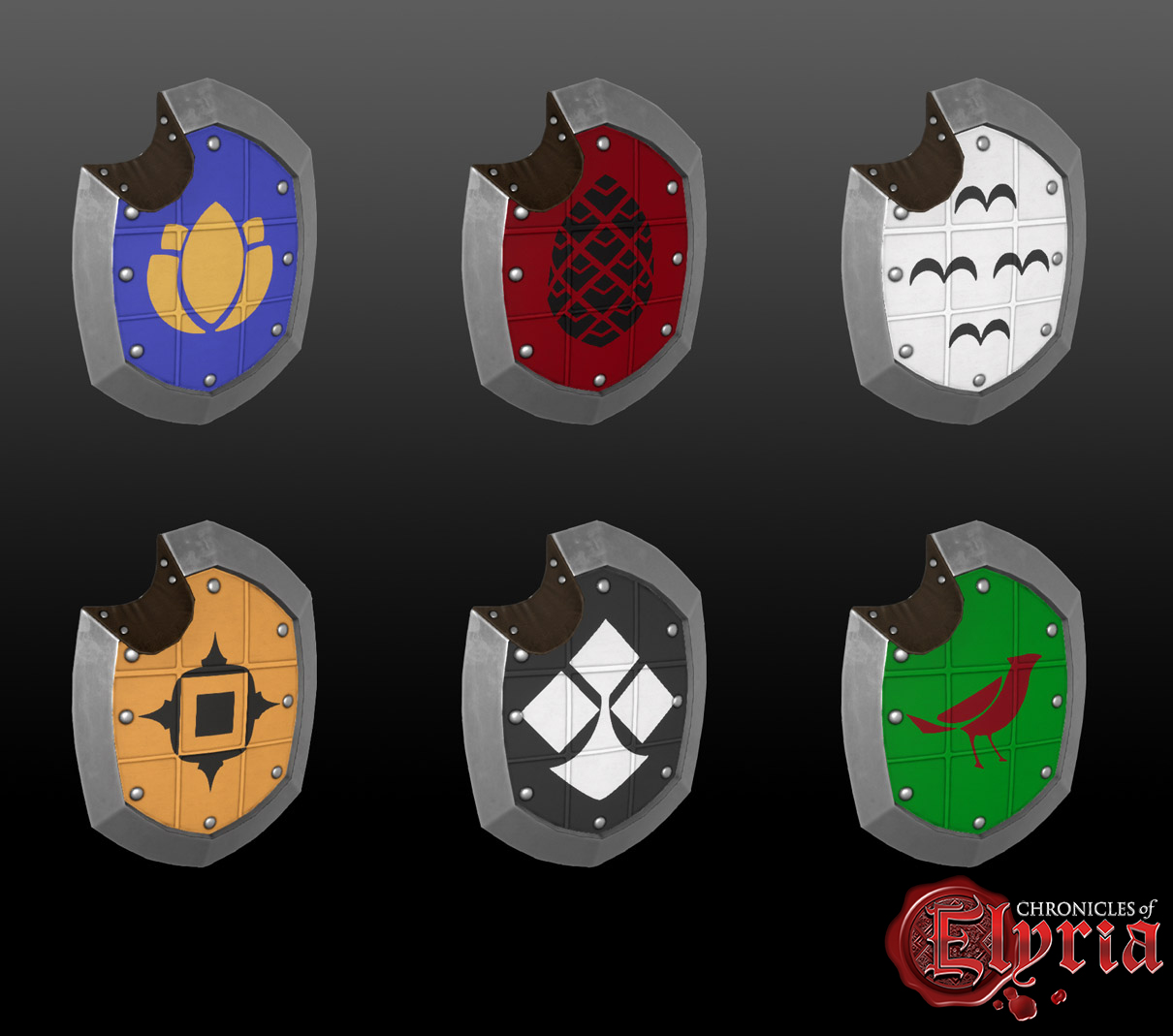 Also being worked on is the horse's equipment and its variation. Heat created concepts for the caparison (AKA horse dress) and other equipment that Neran jousters would outfit their mounts with.

The first two variants were selected for modeling and, rather than model additional outfits, we thought some different colors of horses would be nicer to have.

Vanimus Prime and Racronos worked together to get everything looking, layering, and moving correctly. Here's how that is turning out:

Last, but certainly not least, is the lance itself. While jousting in real life has been done in a variety of ways with a variety of weapons, it's not really a tournament without some nice lances to shatter upon the shield of one's gallant opponent. First we needed to make sure we had the right tech to make the lance shatter nicely. It ended up being relatively easy because of the Unreal Engine. Wiz had this prototype up and running in a day.

Heat provided some color variations so the knights would have more flair, which Irreverent is currently working on texturing. 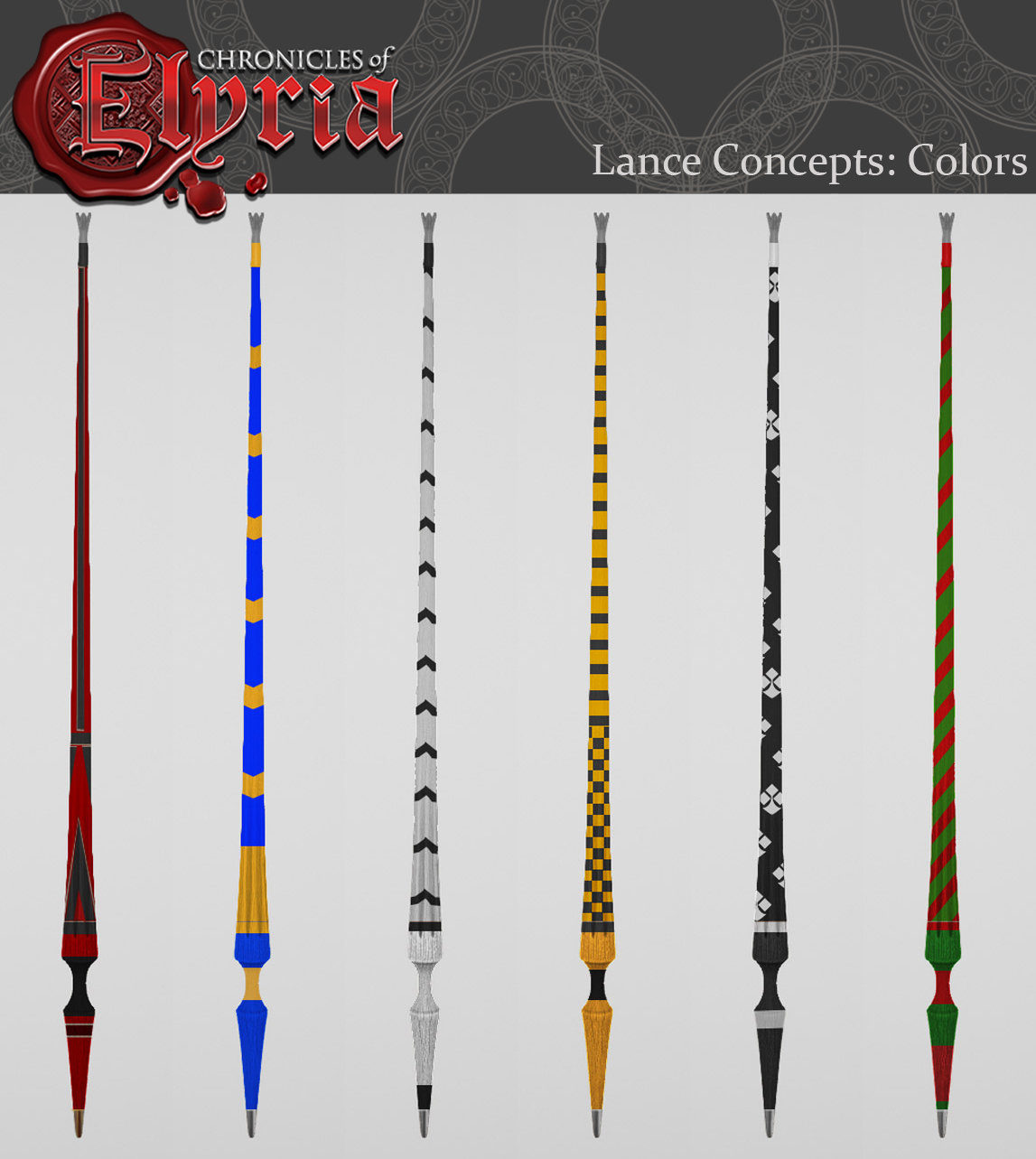 Because of all the hard work the Proto-Tailors have already done, everything you've seen above - equipment and even the tents in the level - has been developed with ease and with reusability in mind. It's against our studio philosophy to do one-off, throw-away, or faked work so you can expect everything you see to be possible for players to create upon launch.

I'm sure you'd like to know how the gameplay is going too. The Knights of Hastilude are at the core of the demo; a combination of members of the Order of the Online, the League of Extraordinary Locomotion, and the Design Guild. Without their efforts, we'd just have a pretty level and cool equipment to run around in. The Knights started off working on separate pieces, with Caspian, Death, and Souzou designing the mechanics and scoring system together before Souzou began to prototype the gameplay quickly in Unreal. Cynax and his guild of Engineers began building out a server-side representation of the level, setting up all the server-side handling for movement and collision between the jousters, and representing the results on the client-side with the appropriate animations and physics reactions.

Once the prototype of the gameplay felt right mechanically, Souzou and Strider began working diligently on making it feel right aesthetically. If you've followed our previous blogs, you know that we want locomotion to be a great experience. While riding the horse already feels great, spurring one's mount on and aiming one's lance were new opportunities for excellence! A little bit of bobbing on the camera and lance, determining the right camera positioning for each phase, and finding the best way to appreciate the impact with one's opponent have been taking the basic experience to new heights.

Of course, knowing what's going on is helpful too, so we're building some UI to help the experience. While our overall approach to interface design will try be as seamless as possible (favoring spatial, meta, and diegetic styles), our PAX experiences require more traditional, non-diegetic elements to help people master the gameplay quickly and understand the scope of the demo. 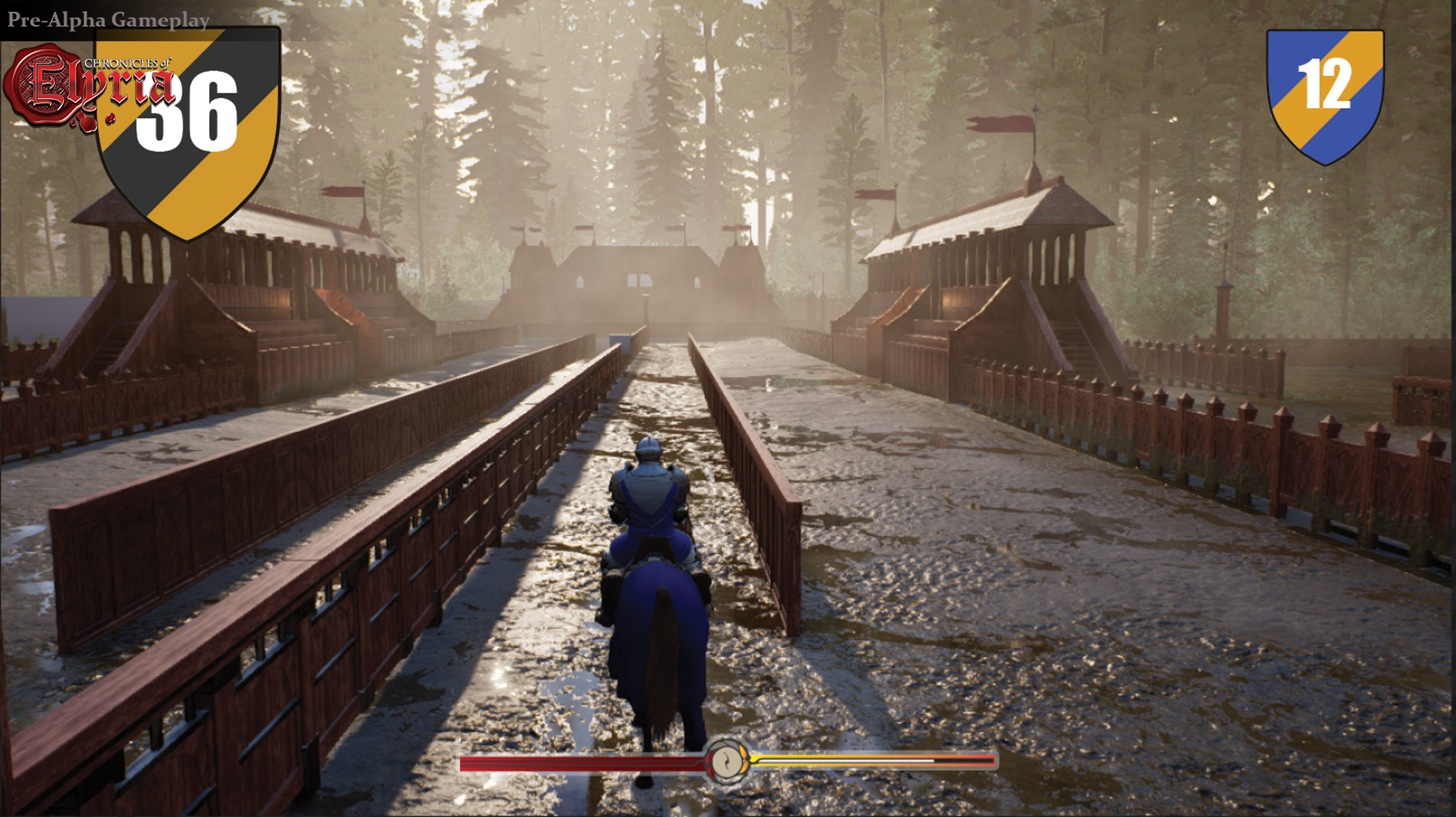 Death has been prototyping some simple elements - like the quick mockup above - but is now heads-down creating the wireframes that Glaive and Scarlet will make real in the game. I like to call them the Interpreters of Joustice, but even Caspian groans when I say that.

But what about the other Protectors of the Web, you ask?

Protectors of the Web

Sidetracked briefly to get the temporary Tribe pages on the Game Guide, the quest for this group is still all about the updated website. ZRO has completed the front-end for the new homepage, so now Kaizen and others are adding in the words and pictures that will finish it off. The site navigation and organization is changing as part of the site improvements, so also nearing completion is the menu bar.

Probably my favorite update is to the registration flow:

Just look at how great that is! So sleek. Such modern. Very checkmark. Wow!

And then there's all the nice fiddly-bits that really kick it up a notch. Check this out!

There's no reason to wait until all the new V3 features are done to drastically improve the website experience through better organization and beauty, so we'll be releasing each updated section as we finish them. Before long, the updated homepage, navigation, login and registration, and game guide will be coming your way. Our feature priority order to get parity with the current site is: homepage, game guide, blog, media section, account area, influence stuff, support and FAQ section, forums, and store. Then it's on to the new features like server selection, chat, or account merging (not necessarily in that order).

Whew! Well, that's it for the production update, but be sure to check out our inaugural Community Journal coming up next week! Not only will Serpentius be spotlighting what's been going on in the community, but he'll also be outlining several new programs we're initiating. Until next time!

Jousting in Chronicles of Elyria