Home > Blog > Check Out All These Character Skins
27 October

Check Out All These Character Skins

Our latest set of quests are well underway and I'd like to give you a peek under the hood to see how we are progressing. If you read the quest introductions then you will be familiar with what we are working toward: the first VoxElyria release to our Alpha I backers. At the end of this adventure, we'll be ready for our friends and family to get in from outside the studio. At the end of a couple more adventures, we'll be bringing in those Alpha I backers.

The Quest for Character Creation

In order for players to create characters, we need to have a variety of backend data to set, and client-side visuals to display. While Michael and Sekmu are adding in support for all the various skin colors, hair colors, eye colors, hair styles, facial hair (where appropriate), facial features, body proportions, and heights that a character can have, our artists are creating the extents for all of those things. Unlike a standard RPG character system, we are using a system of genetics that constrain your customization options to be near to your parents. The goal is for family members to actually resemble one another - because they're, you know, related - but still allow players to choose their precise appearance from those constraints. So that means that we don't generate character assets the same as other games. Modeling an arm, a nose, an eye color, etcetera, is a straightforward task in the usual RPG because that asset can stand on its own. We are creating systems that allow arms, noses, eye colors, etcetera, to occur within a range from Kypiq to Yoru.


A demonstration of the different ways a character's body can physically change. The adventure conclusion will show off much more granularity

Tribal bloodlines in Elyria will exist so far as players maintain purity of that bloodline. However, different tribes will be able to produce offspring with one another so we need to be able to support any and all cross-breeding that can and will occur. At first, players will be creating VoxElyria characters which will be pretty simplistic (read: programmer art) in regard to appearance, but the data on the server will be agnostic of which client (Voxel or UE4) is being used.

The characters are being updated in real time over the server in one of our VoxElyria test environments by editing a simple text file. Amazing!

That same character will be able to exist in either one interchangeably.

Side-by-side of the same data coming over the server in two different clients: VoxElyria and Unreal

The character attributes aren't just something that is set by the player during character creation. Certain attributes, like strength, will be affected by your in-game activities. If you eat a lot of protein and do manual labor, you'll be more muscular than someone who sits at a desk and eats pastries. The attributes that are stored in the data need to be set dynamically and served to nearby players so they see your true appearance. Again, this means creating assets that can exist at either extent and everywhere in between. However, VoxElyria characters are not expected to have those kind of visuals since it's meant to be a quick-iteration client for us. Instead, Vanimus Prime, Irreverent, and Strider will be making sure all the Unreal characters have full support for this no matter the genetics.


We begin by creating poses for the extremes a character can have, and then blend between them to create everything in between

There is a lot of detail in something as simple as the color of one's skin. Wiz put in some amazing shader work that will keep our characters looking great!


Tribal heritage, time spent out in the sun, age, and more are all contributors to one's skin - and it's more translucent than you might think. Look at those veins!

Your parents will set the basis for what you look like, but you get to decide which parts you are taking from whom. Greater facial customization will be part of the next adventure so, for now, the facial features are limited to what you see here.

I broke the lighting in the level before I recorded this, so pardon the flickering. You get the idea though!

All this is just the first step, not the finished product! By the end of the quest, we can generate new characters into the world that can persist whether we are on or offline, for as long as the server is active. Cynax is working on the UI system in order to create the character creation screens we'll need to log in, create a character, and enter the world.

Though not strictly required for this adventure, Irreverent and Vanimus Prime are doing R&D for the next leg of work. I was going to keep this to myself until the next update, but Caspian convinced me to show it now (you all know how fond he is of leaking cool content)!

You'll see more on that in the next adventure!

Creating one's account is as simple as creating it on the chroniclesofelyria.com website. Though Cynax is developing the interface and environment that will allow us to play outside of the studio, much of the work here has been an intrinsic part of the V3 Website and Soulborn engine environment. There is nothing to show, since it is all under the hood, but all the logging in, creating or selecting a character, and logging out will hook into these systems. There's sadly not much to say since the architecture is quite nice and is easing development across the board now that we're in the thick of it.

The Quest for Online Terrain & Physics

The initial VoxElyria level that we showed earlier this year had some limitations: the terrain collision was not high enough resolution, the client-side physics and prediction were not finished, and the terrain data was all set in a local file.


Here is where the terrain fidelity was before

We are improving the terrain fidelity and ensuring the physics and collision are in line with that. You can see some different samples we tried using the same terrain data being downloaded from the server. 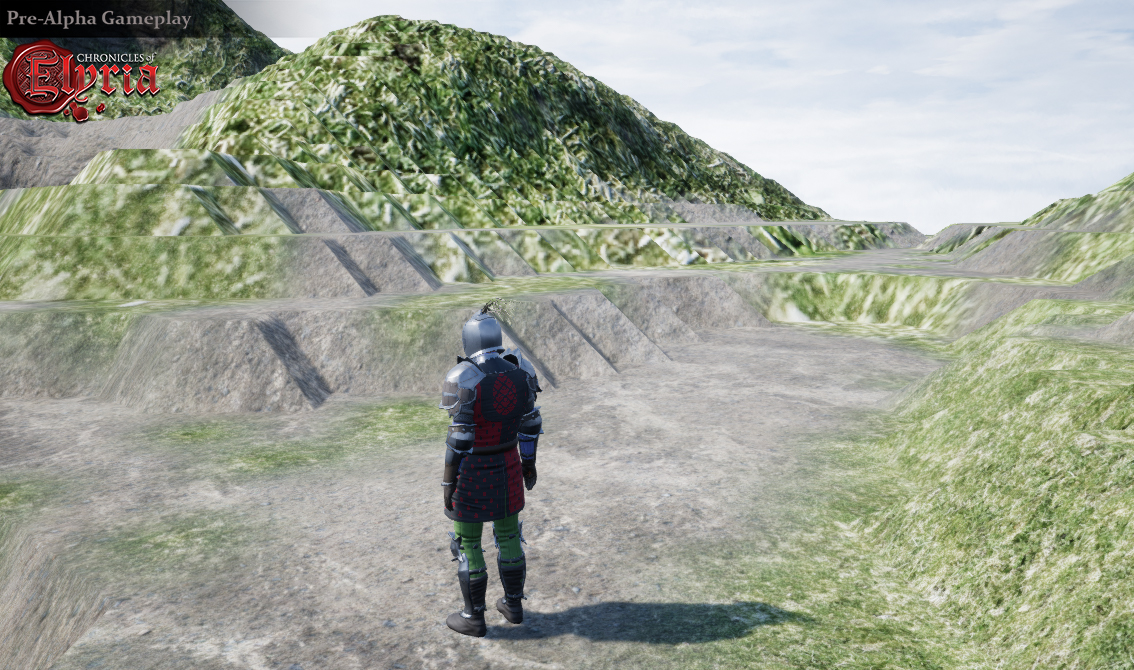 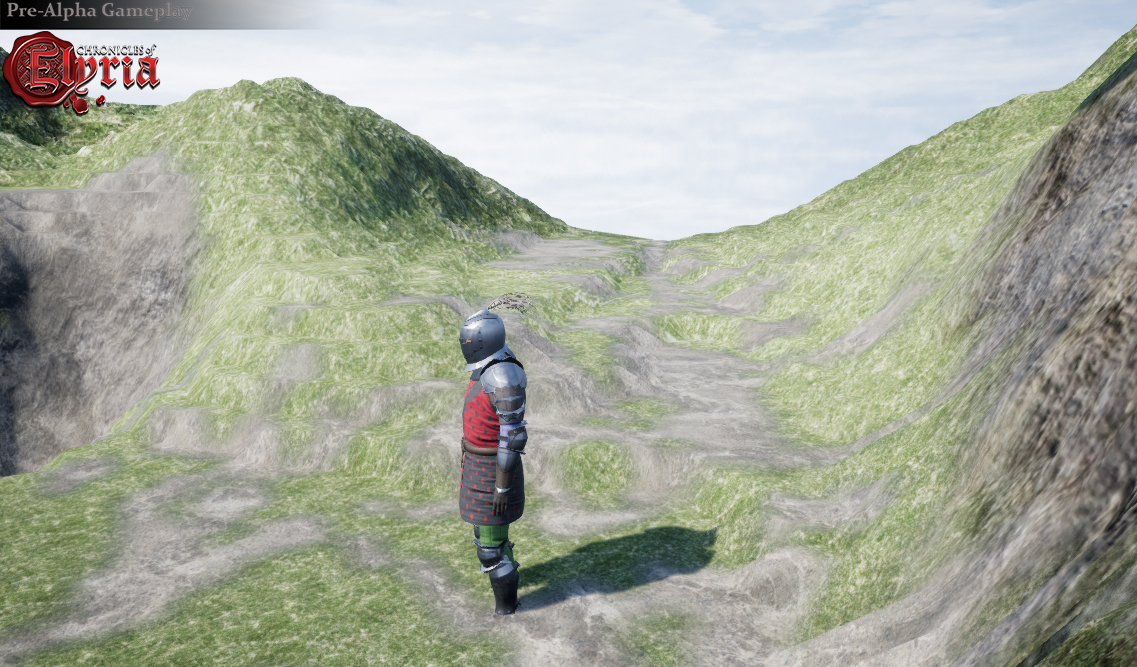 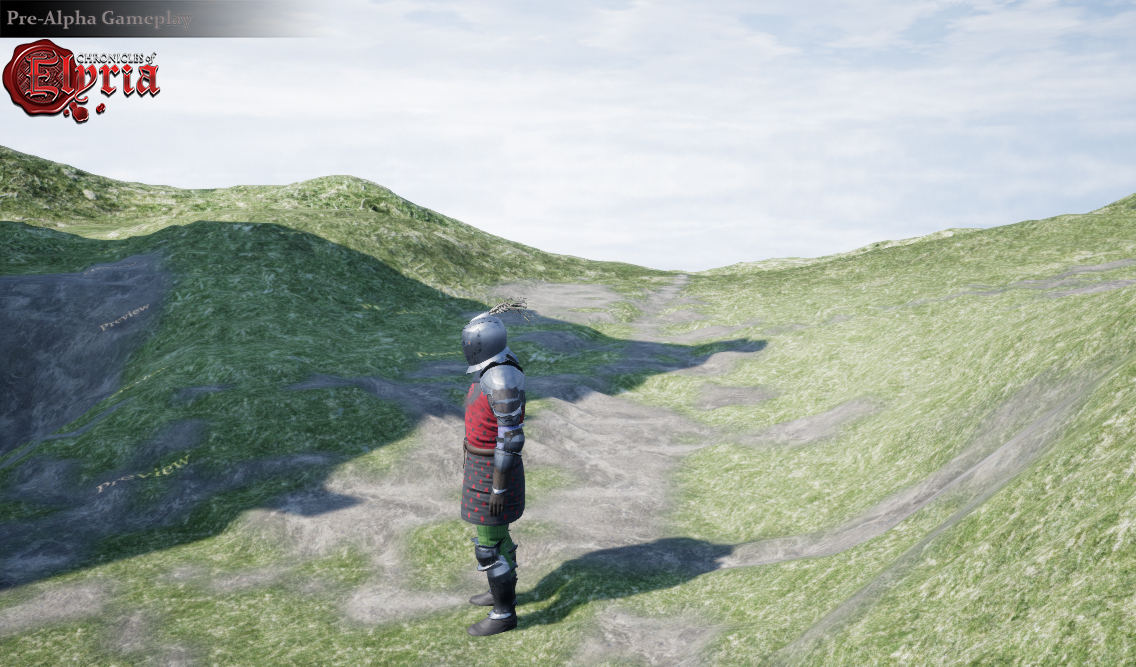 Now it's a matter of making sure that the terrain around you is downloaded and cached by the server before terrain that is further away, and not any of the terrain that you won't need. Right now, we're only downloading the terrain, not any trees or buildings (the area you're looking at is actually in Silver Run). After that, the physics between the client and server will need to be synchronized so that moving around feels as smooth when online as when playing locally. In VoxElyria, the synchronization won't be as important since the animations and inverse kinematics won't come into play, so this last bit is only needed for Alpha.

The Quest for Survival Mechanics

This quest is already complete! Because of the way we've structured the Soulborn Engine, this actually only took one sprint to do. In its current state, the server monitors your energy and displays it. When a character sprints, their energy is depleted. When the character walks, their energy replenishes. As an added bonus above and beyond what we asked for, Sekmu sneaked in while the party was sleeping and added a rest state that the character can enter where energy is regained more quickly!

Though the quest was a pretty low challenge rating for the party, it paves the way for all the other survival mechanics that will come in future quests, such as needing food, rest, shelter, homeostasis, and more!

The Protectors of the Web

The Quest for V3 of the website is still underway and we've been pushing out updates for it here and there. Some you've seen (such as the new homepage and registration) and some you haven't (the components and graphics for building out the game guide and other pages). One major piece of that work is what actually shows up on each of the game guide pages, both the words and images and in what configuration. A lot of this information is hidden in Design Journals and we want to extract it from there and put everything in one, easy page tree.

I'm the one who writes a lot of the words around here so I've been chipping away at the new pages in my spare moments. If you're looking for someone to throw under the bus for why the game guide isn't out yet, you can throw me there but it's more complicated than all that in reality. Even so, while the rest of the team waits for that to be finished, they've been annihilating bugs and working on improving our blog, newsletter, and marketing efforts. You may have noticed a flurry of activity from us lately, and that is why.

Not all the images are final, but hopefully you can get an idea of our overall aesthetic

The game guide work is accelerating with the addition of Kaizen and now Snipehunter to help with the copy, so practice your best slow clap so you'll be ready when the update drops at last. For now though, courage!

The Quest for More Biomes?

Raevantiel has struck out on his own to scout the next Adventure, and there be biomes on yonder horizon! Elyria is a big place and there's more to it than the vast forests that you've seen quite a lot of to date. As a possible spoiler to part of the next adventure, we are developing more varied terrain types and, therefore, more biomes. Initially, we want to focus on the major biomes that are the homes for our launch tribes: Taiga for the Brudvir, Freshwater Swamps for the Dras, Mountain Steppe for the Hrothi, Tropical Rainforest for the Janoa, Broadleaf Forest for the Kypiq, Grasslands for the Neran, Wetlands for the To`resk, and Semi-Arid Desert for the Waerd. We selected four of the most diverse to begin exploring. First, we need to make sure that the overall topology is spot-on and the soil type is what we want. 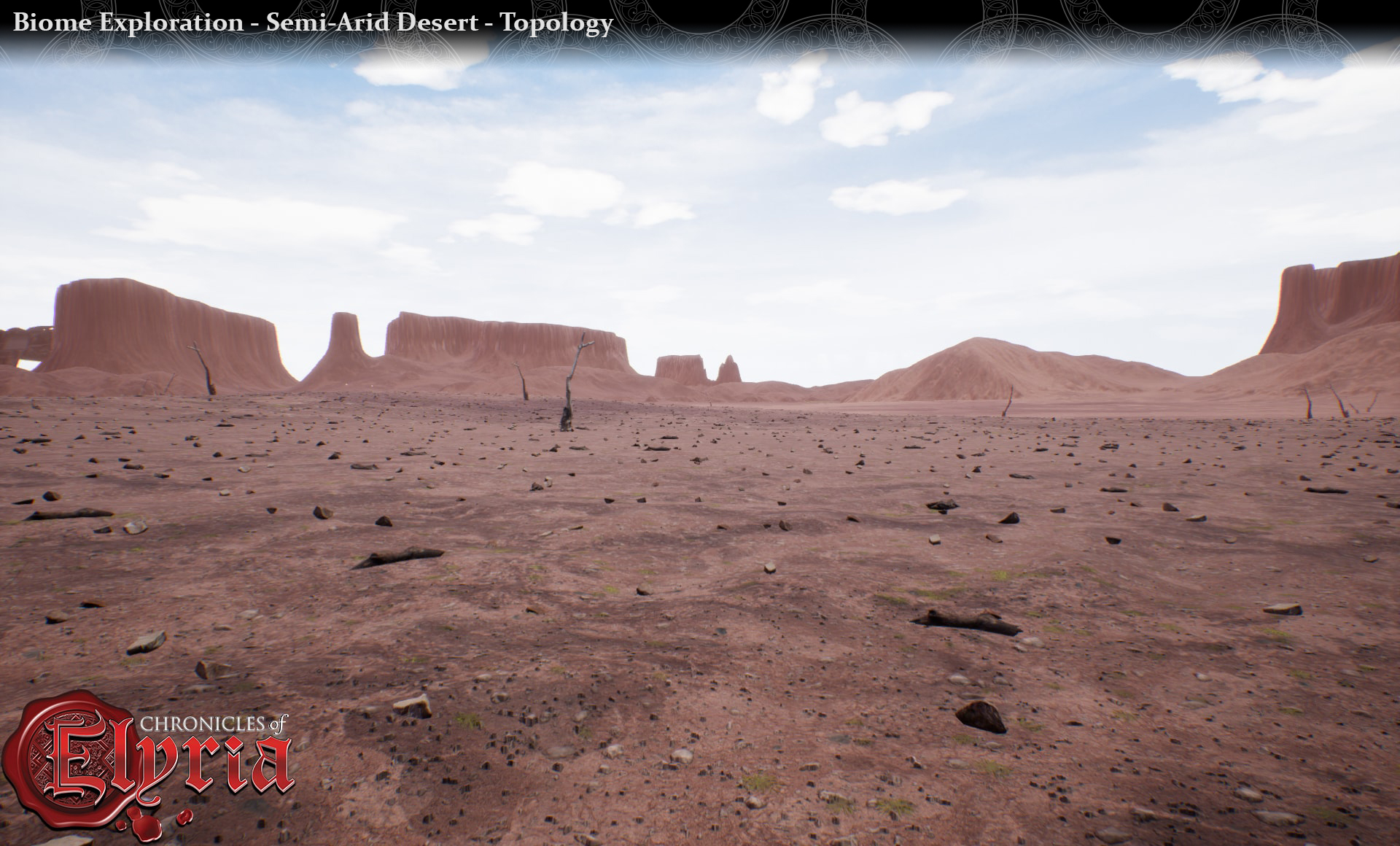 We were looking for a ruddiness to the soil and mesas that were varied in size, height, and structural integrity

Then we can begin layering in different features: underbrush, trees, rocks, water, and other foliage. So far, we have nailed down the topology for the Semi-Arid Desert, Swamp, Taiga, and Tropical Rainforest. 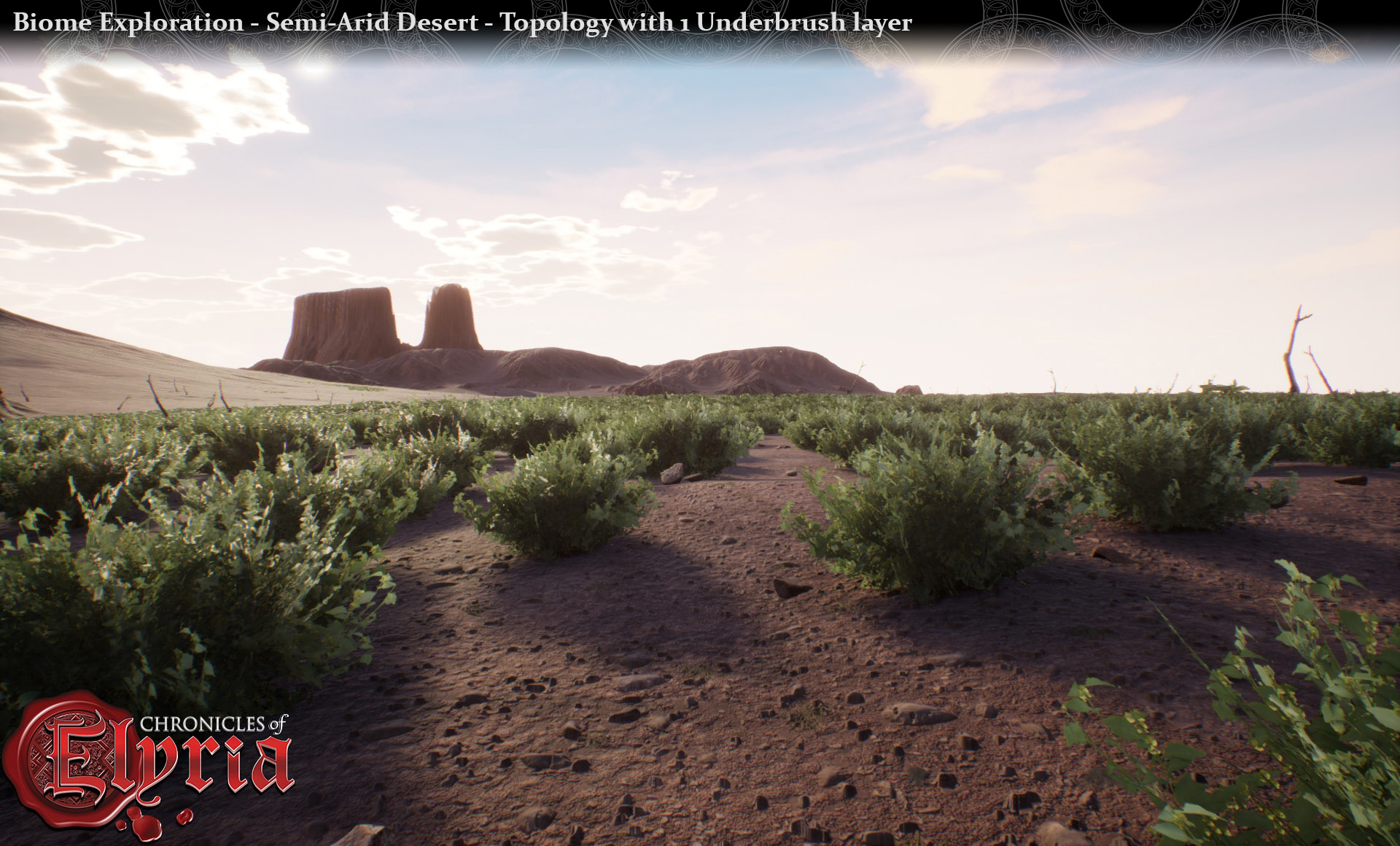 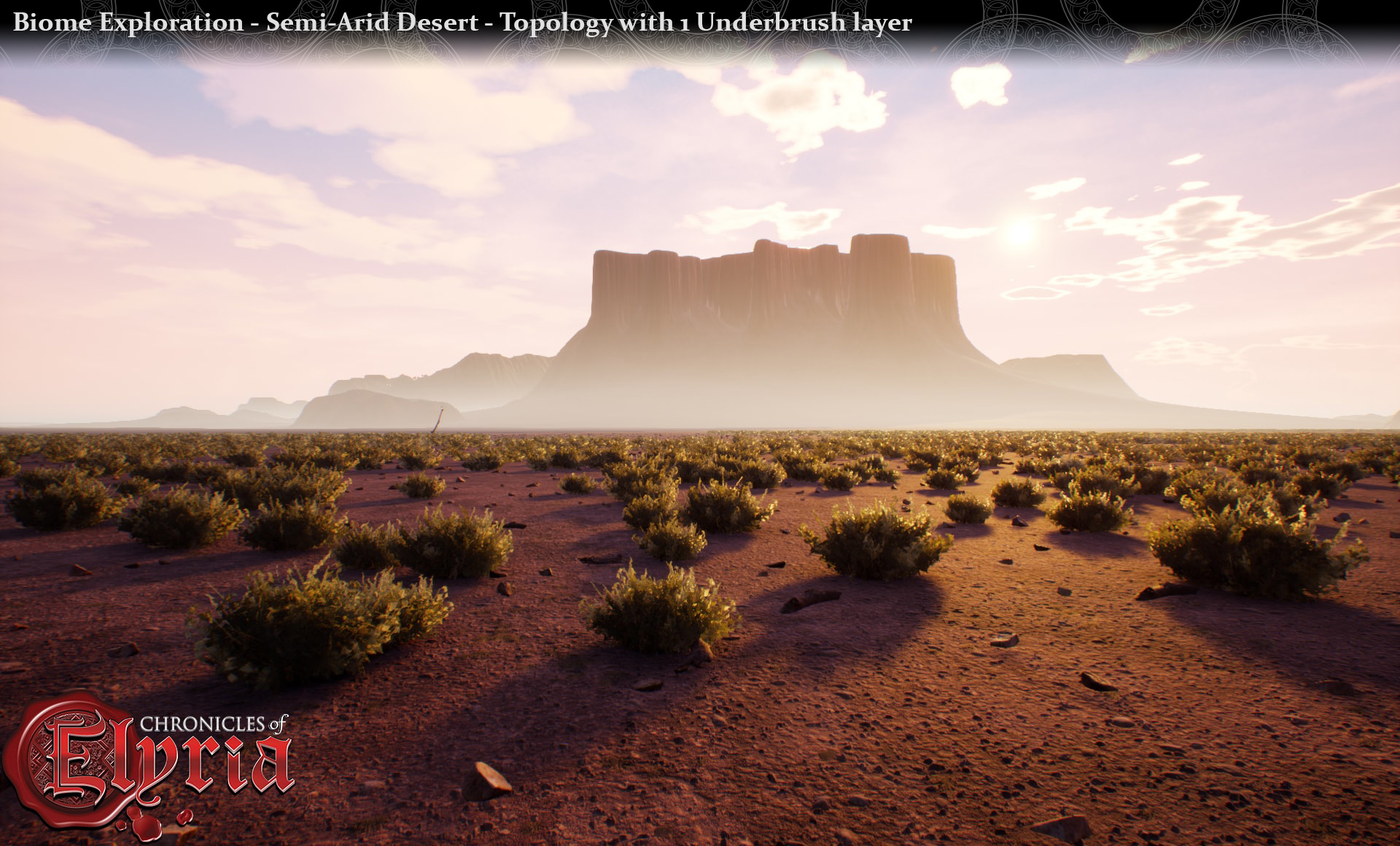 As you can see, even just one type of shrub can start to add a lot! We'll be adding in some grasses here next. 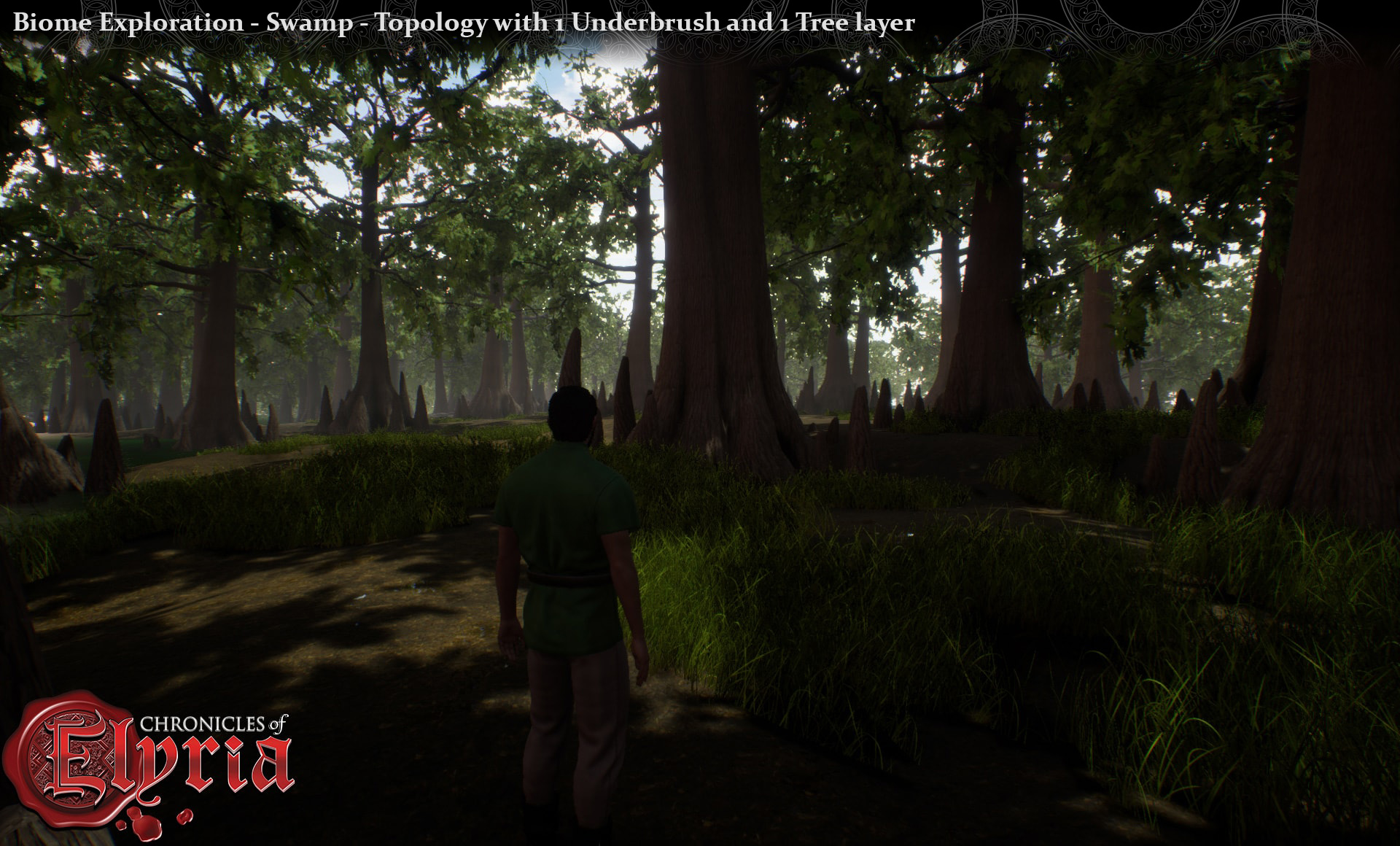 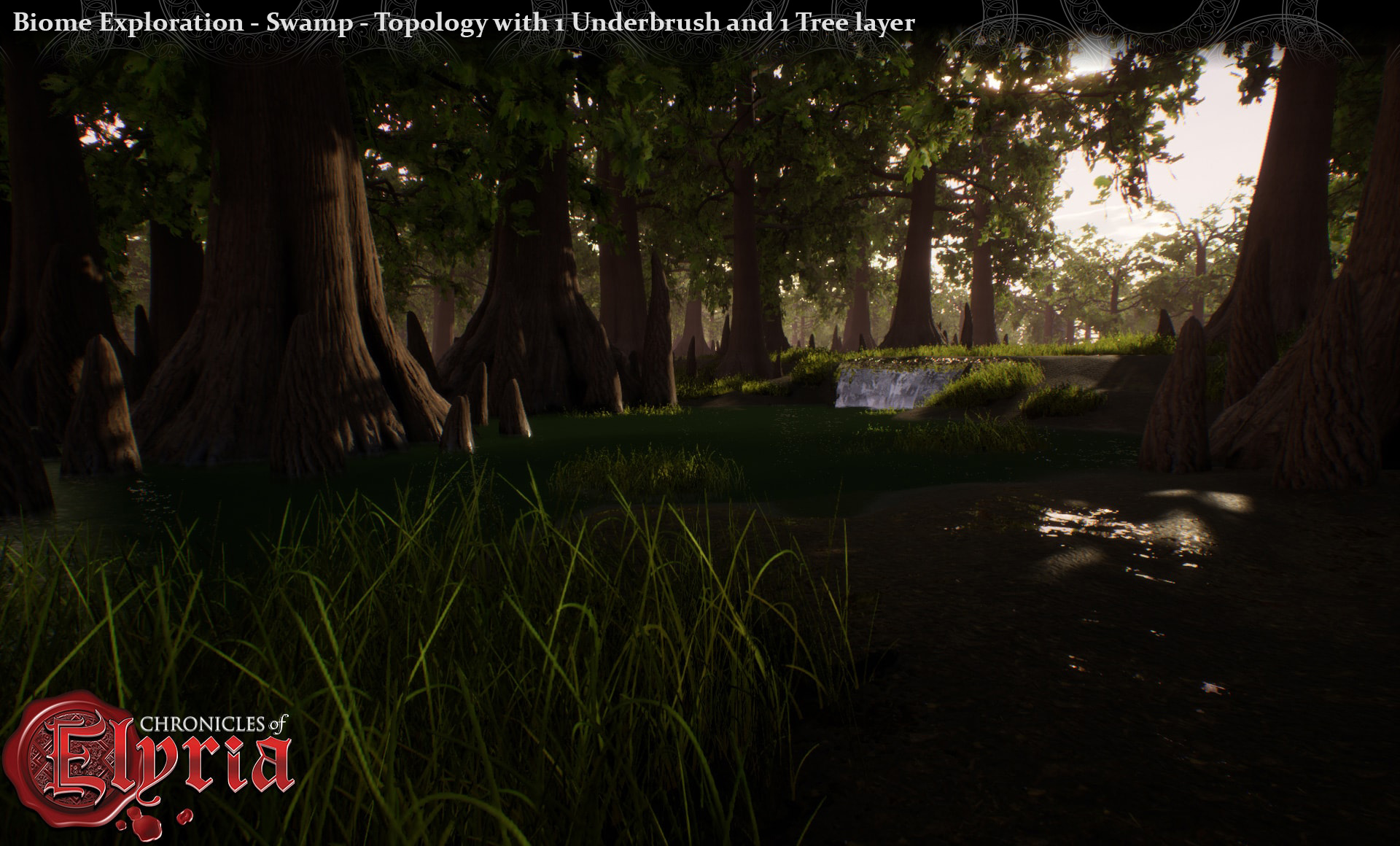 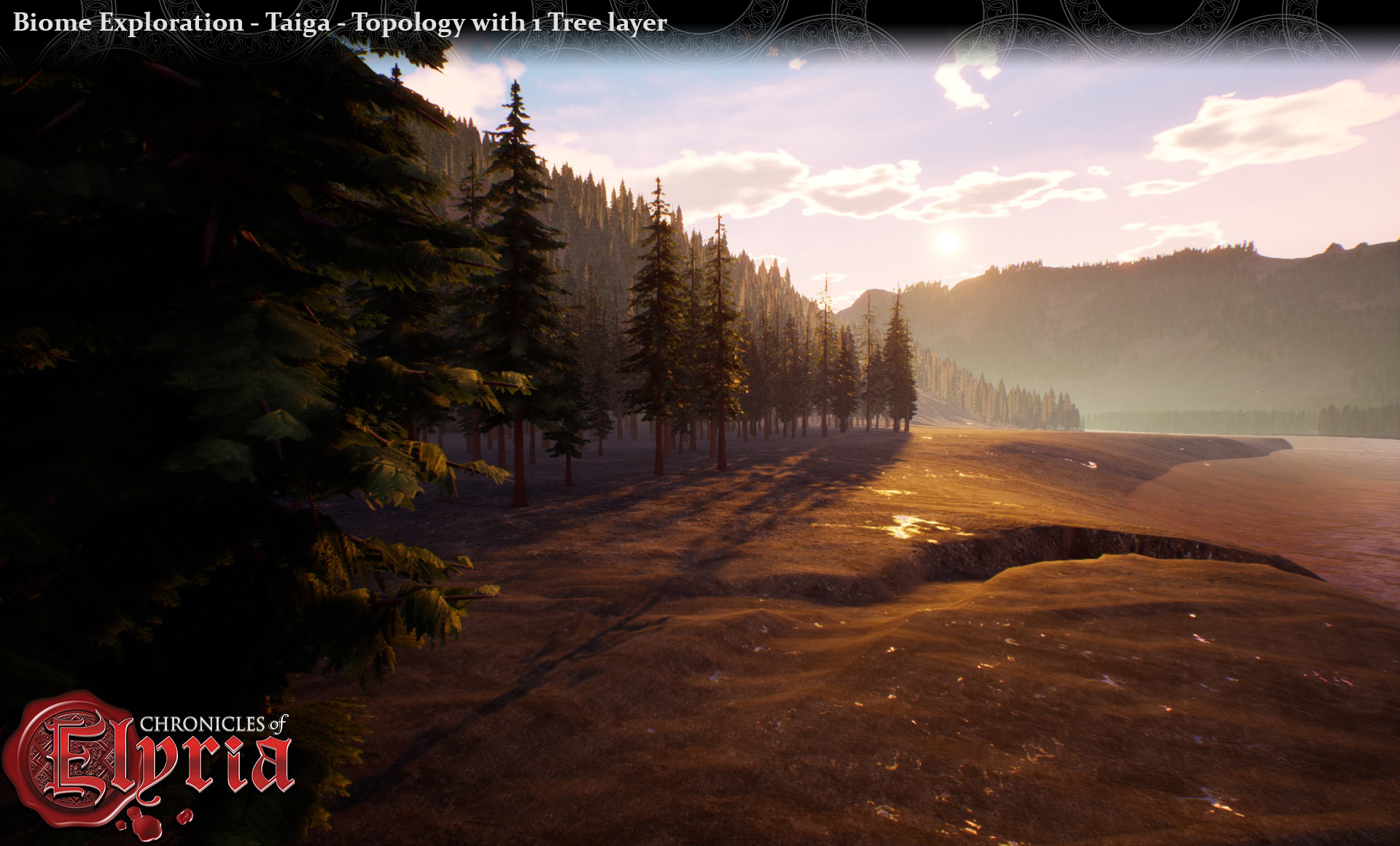 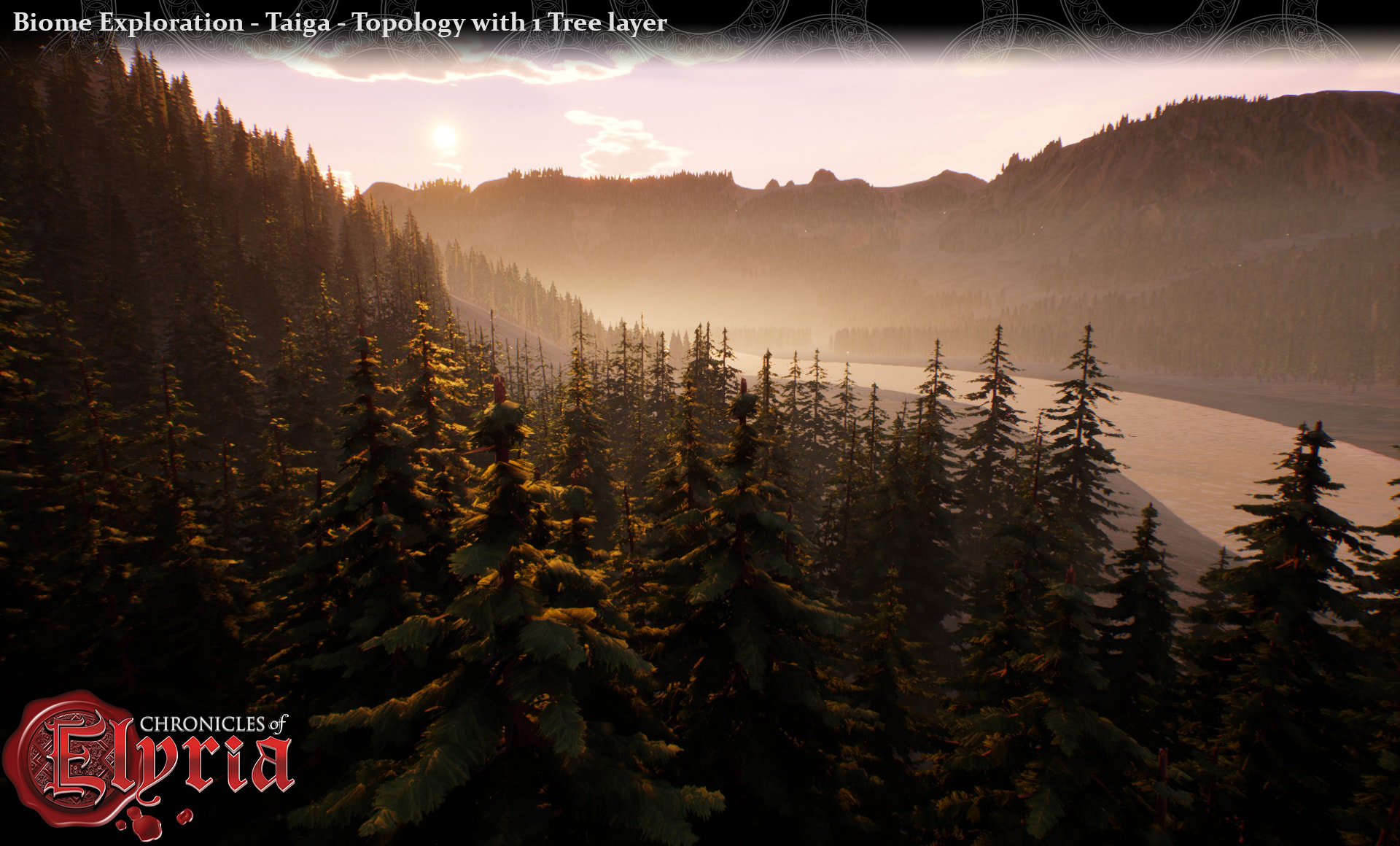 The Taiga: we're showing mostly boreal forest here, but with a transition to alpine forest in the distance 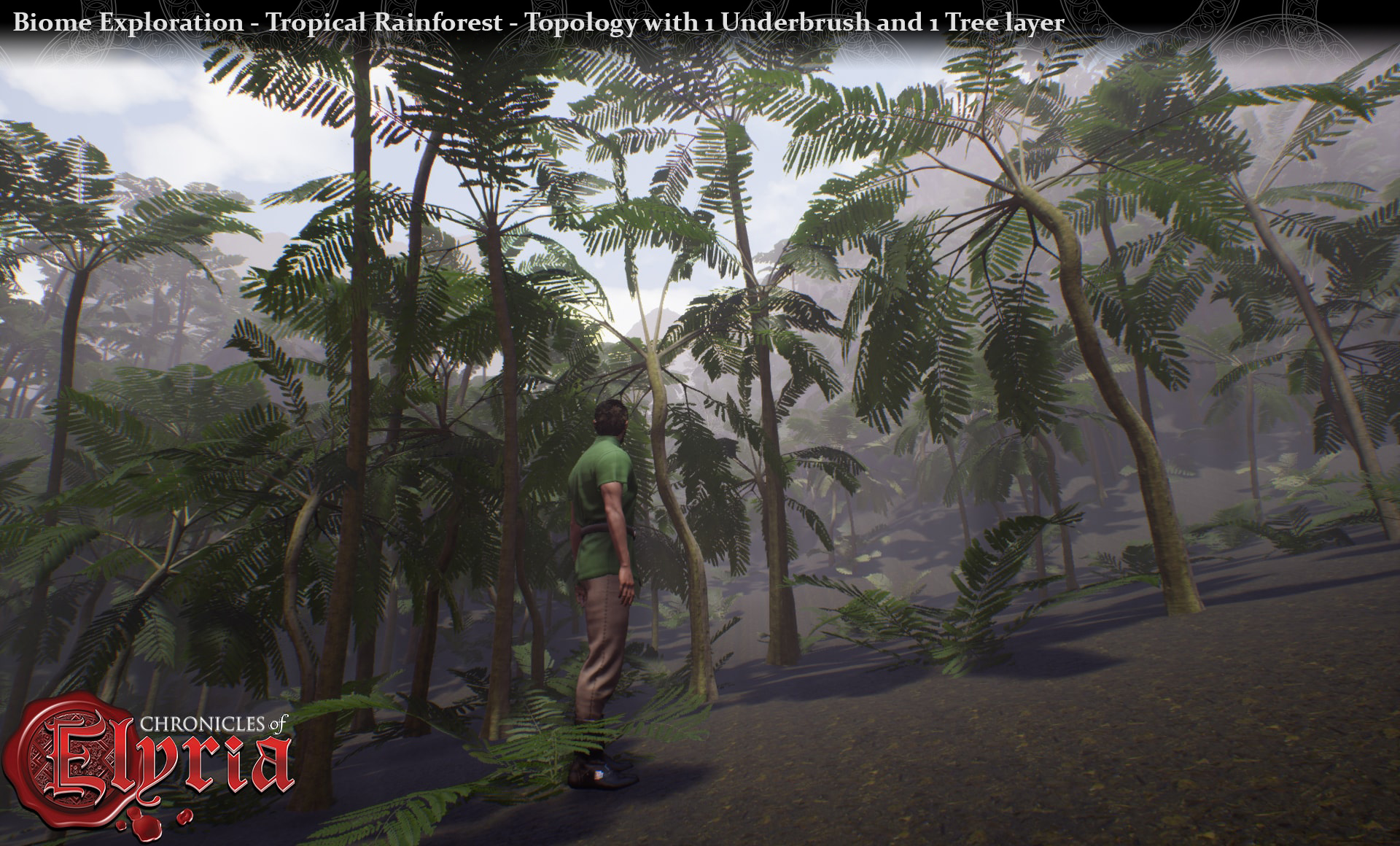 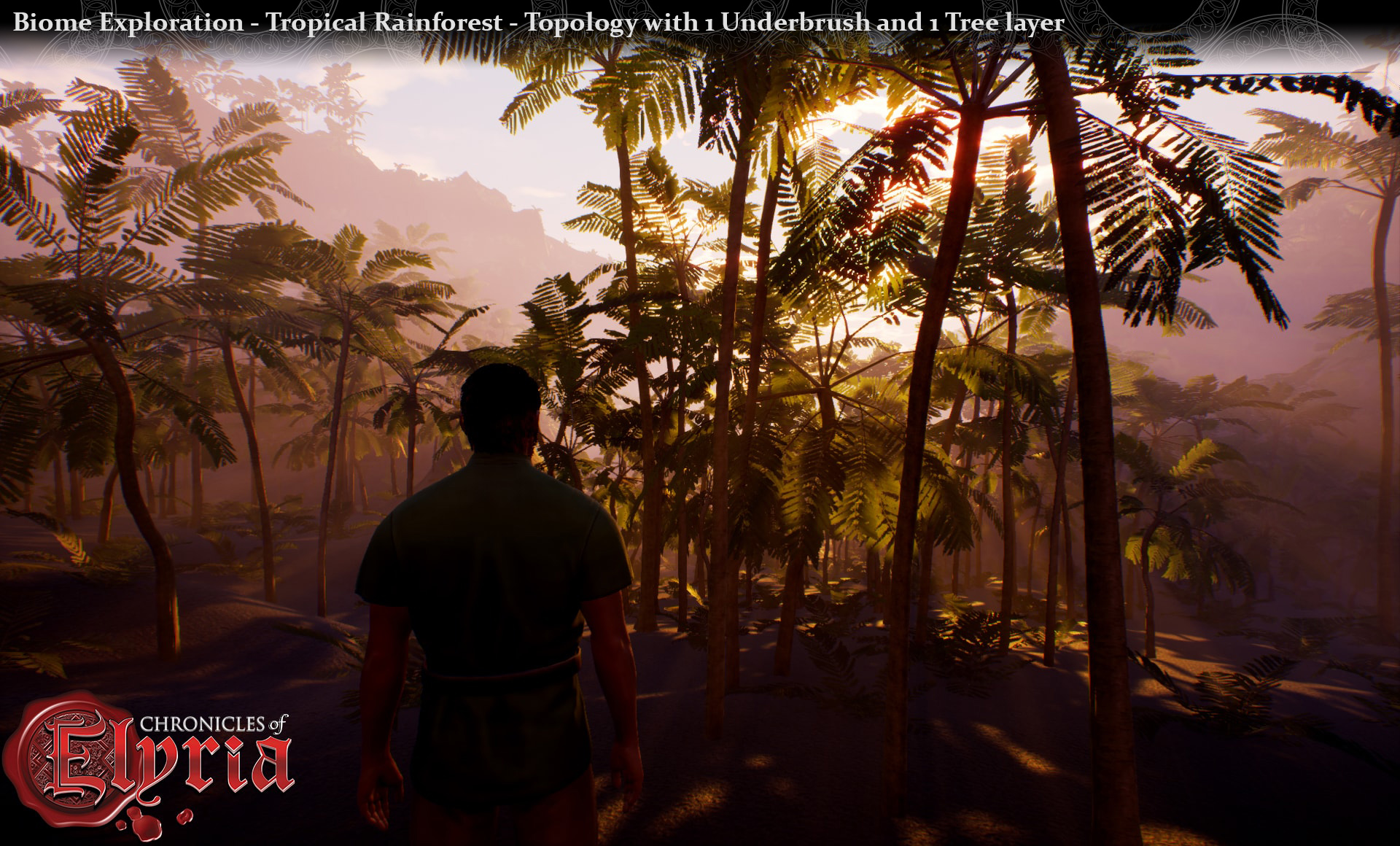 We're not sold on these trees, but the soil should be rich and dark and the terrain is nicely variegated

Though we're not expressly trying to nail down the lighting and time-of-day targets for these areas, our existing lighting system does allow us to play with some different times of day. I particularly like the jungle at night. 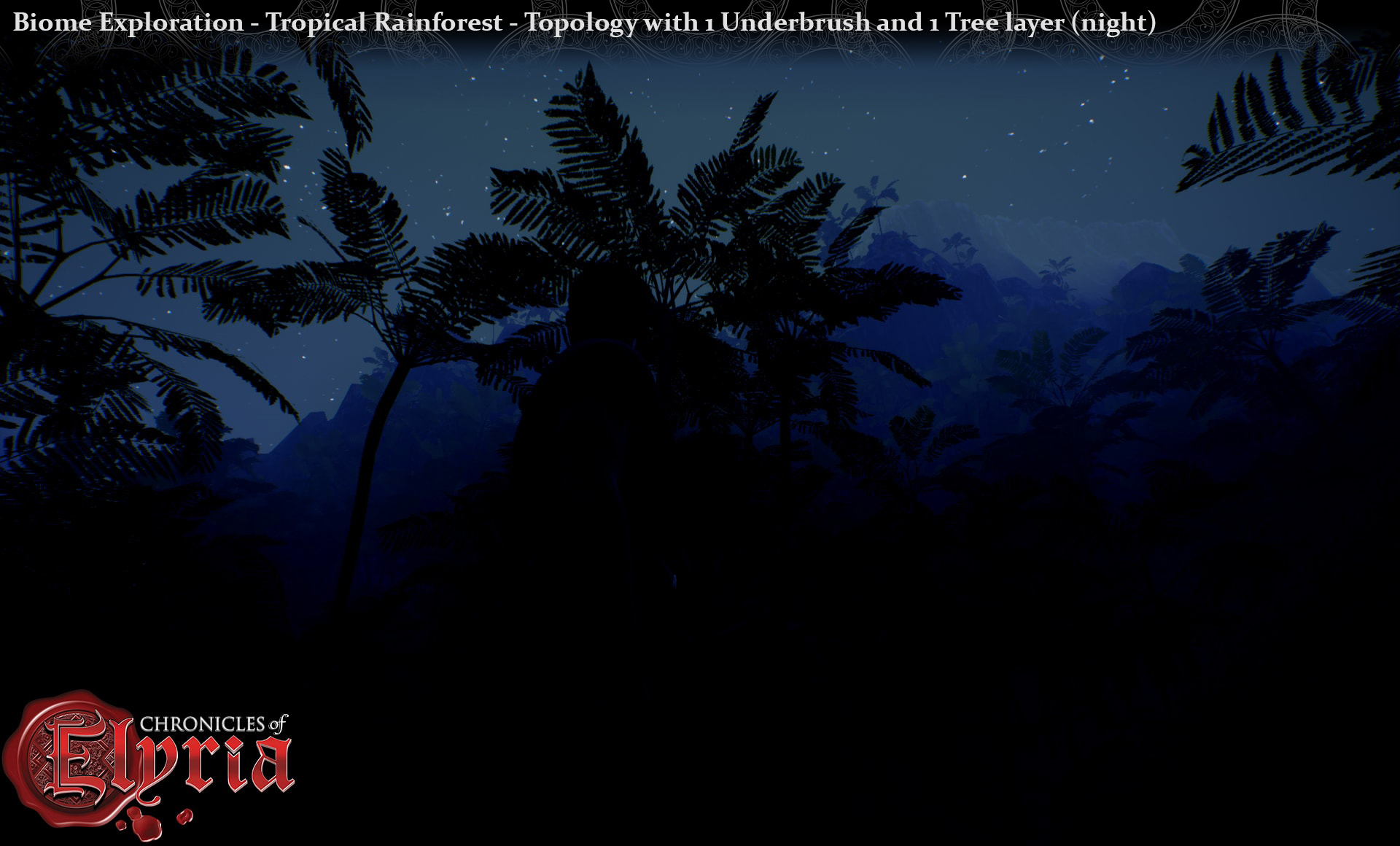 I hope it shows in the progress you see, but all our foundational efforts from earlier this year are continuing to pay off. First, the jousting demo came together in a short amount of time. Now, we are pushing on VoxElyria and Alpha I features with reckless abandon! With our focus being to prep VoxElyria for release to our Alpha I backers, it's generating a lot of excitement around the office. What about you?

The Countdown to VoxElyria Begins

Queen's Gaze is upon us!