Queen's Gaze is upon us!

Every 52 years, a comet appears in the sky, dominating the view for the course of a year. Seen as a bright white streak across the sky with a dark black pit at its head, the comet is an omen to many faiths, symbolizing a period when life and death are in equilibrium and the veil between the spirit realm and Elyria is drawn away. It’s a time when the living and the unincarnated souls of the dead can interact more freely, and darker, hungrier creatures of the spirit realm are free to dwell in the land of the living. 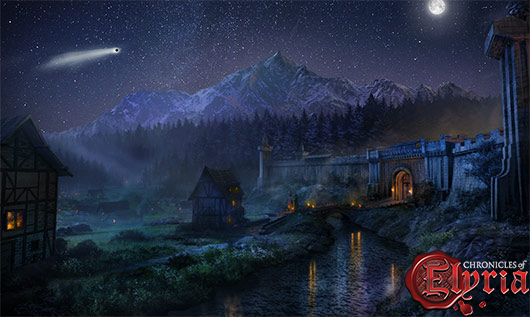 The Holiday of Queen's Gaze

The holiday begins with the appearance of the comet known as “The Eye” in the night sky, early at the start of the year. The Eye will remain visible in the sky, seeming to slowly move from the western horizon to the eastern horizon if viewed at the same time every night. As it approaches its closest point to Elyria, it grows brighter and larger, reaching a peak just as it reaches its zenith in the sky at approximately the middle of the year.

Throughout this period, the astral and material realms overlap, allowing spirits and the living to interact more freely. Glimpses of entities from the spirit realm are supposedly common during this period and many old tales warn of the dangers of possession, corruption and abduction at the hands of those spirits who are unable or unwilling to return to Elyria via reincarnation. Though the event happens only once every few generations, there are many stories of souls who become “lost in the twilight” as they try to make their way back to their bodies, their silver cords thinned and weakened and their sense of self confused to the point where they cannot find their way back before their bodies die.

Those who believe in strange tales say that Queen's Gaze is the time when the Soulless, those that hunger for the Spirit of the living, are most powerful. It is a time when one’s life and one’s soul are equally at risk. They say that liches are born when the Eye rides the sky and that lost souls will lure the living away to grim fates. This is the time where ghost stories and grim accounts are told of horrors with fanciful names like the Marsh Mother and the Lantern Man.

While the more lurid stories of the Eye’s appearance are dark stories and warnings to fear the dead, there are just as many references to the comet’s arrival that are joyous or reverential. In past arrivals, stories of visitations with the souls of long-lost loved ones were abundant. Monarchs would confer with their forbearers, seeking guidance for the future. These stories have evolved into the more playful celebrations of some cultures, today.

To the Waerd, the Eye’s travel through the sky signals an auspicious time when the Twofold Queen’s will is most obvious and their work on her behalf most momentous. They see the Eye as a direct representation of the Twofold Queen, and Waerd machinations reach their peak as they consider Elyria – and the Waerd – to be “under her gaze.”

Many Dras are similarly reverent of the period, though they see the time as an opportunity to aid the fallen back to life, to restore balance by ensuring the flow of souls is unfettered. As such, their efforts in this time tend to focus more on settling the matters of the fallen. It is not unusual to find Dras in this time, assisting in the burial of the dead and the rituals of their passing.

For most, however, the appearance of the Eye has no connection to the Twofold Queen and is instead seen more as a time to remember the fallen and to pay homage to those that have come before. Common practices throughout the year include grave tending festivals, where a settlement, village or city actively improves, maintains and then pays respects to the graves of those that have passed on in the region. This lends the passage of the Eye throughout the year a more festive and celebratory cast and daily gatherings in towns to boast of the deeds of the fallen are not unusual. In some places families will attend to their lineage’s graves, festooning them with bright colors and symbolic effigies of their favorite foods or personal items.

When the Eye hangs in the night sky, it’s not unusual for taverns to maintain a “vigil” throughout the year, where those who have lost comrades will enter the tavern, announce that they keep the vigil for their friends or family and then proceed, over a round of strong spirits, to tell a tale of the fallen, passing on the story to others in the tavern so that the deeds of the fallen soul’s last life can be spread and remembered. While some vigils are somber affairs, it is far more typical for a vigil to be a raucous affair of tall tales, full of cheers and songs in celebration of fallen comrades and proud ancestors.

Others take the Eye as a metaphor for the Qindred, seeing its dual nature as a vision of Angelica and Luna parading through creation hand in hand and a sign of good fortune for all. This leads to an odd synthesis of practices in many metropolitan areas, where the celebration of those who have passed on is mixed with a general jubilation of life, leading to raucous festivals and parades in neighborhoods and fanciful tournaments or market festivals that can last the entire year. Often these festivals will include imagery of death and life, side by side. Gaily decorated symbols of death, motifs of white and black and jewelry of silver are common elements of decorations during this time.

On the shore of the Evenmere, there was once a prosperous village of fisherfolk. Jevirelle, though an outsider from afar, had joined the village as the new wife of a fisherman and was welcomed into the community. Sadly, Jevirelle had lost her husband to the surrounding marsh and its hazards within a few short years of joining the village, and before she and her husband had started a family of their own. She suddenly found herself alone in the grand house at the village’s edge that she and her husband had built. In the autumn of that same year, the banks of the Evenmere flooded, destroying the village’s pier, the waterfront, and shattering the families of the fishers who lived there. It broke Jevirelle’s heart to see so many suffer as she had, so she opened her home to the immigrant children, outsiders like herself, who had lost their families to the flood. Soon, she found herself the Matron of Evenmere’s sole orphanage, an institution she would operate until the night of her death, many years later.

It began in the afternoon, as the Eye appeared in the sky for the first time in generations. Three boys from Jevirelle's orphanage were walking home through the moors after spending their day foraging for truffles. Just a few yards from the outskirts of the village they came across a hole dug into the moist loam and, partially buried within, the body of a woman, still warm, its blood oozing into the peat at the bottom of the hole. The boys understood that something foul was afoot and immediately ran to the village to alert the magistrate.

Jevirelle expected her boys home for supper that evening, but as the afternoon wore on and the shadows grew long, she began to suspect trouble. Wrapping herself in a shawl against the evening chill, she set out to find them, fearing – rightly – that they had fallen into trouble somewhere in the village. At first, she saw no sign of the boys. Indeed, it seemed as if most of the town was absent from their usual haunts. As she made her way to the town center, and she realized where the villagers had gone, Jevirelle’s concern grew.

She found her fellow villagers assembled in the village’s market square. The throng surrounded the mayor and Jevirelle's three lost wards. The crowd was a din of shouted accusations and anger that Jevirelle could not make out, but as she pushed her way through the crowd, their words became clear.

I always knew they were trouble!

We should have sent them back to where they came from!

Jevirelle pushed through the last of the crowd, seeing her boys in detail at last. They had been beaten. Scratches and sick purple bruises covered their faces. Their hair was matted with their own blood and the dirt of the road. Though they offered no resistance, they were being held tightly by three of the village’s strongest fishers, like common criminals. The mayor stood before the crowd, his arms outstretched. Perhaps, her fears better under her control, she would have seen his efforts to calm the crowd, but to Jevirelle he seemed to be indulging the mob, stoking its anger and exalting as that rage roared to life.

Against such fury, she felt calm reason impossible and so she simply pushed past them, mayor and all, stalking towards her children. So palpable was her determination to free her children that the men holding her boys blanched, releasing their holds. She pulled her boys from their now loosened grips and pushed through the crowd once more, having never spoken a word. Behind her, the crowd erupted into screams and howls as she pushed her wards back through the village to their home. Though no one stepped forward to stop them, it was clear the crowd had not had its due. The confrontation was far from over.

They followed Jevirelle and her orphans all the way back to her home, screaming accusations and insults the whole way. As Jevirelle tightly shut her door, they were gathering on her property, ignoring propriety completely. Jevirelle summoned all her wards from about the house and gathered them in her hall. Hugging each one in turn, she assured them that she would see them through this. Jevirelle vowed that she would protect the children, no matter what it took, but Jevirelle would be unable to fulfill that vow.

At first, they assumed the smell of smoke had come from the sputtering torches and lanterns of the villagers outside but, as the smoke started to collect along the ceiling, Jevirelle knew that the villagers of Evenmere, her friends and fellows had done the unspeakable. The angry cries outside became cheers and chants. Surrounded by the mob, with nowhere to turn, Jevirelle and her children burned in the remains of the house she had built with her husband. When the smoke cleared and the embers cooled, the villagers found the remains of Jevirelle and her wards in the hall, huddled together in a grim embrace. The bodies were a black mass, but they were surrounded by a halo of light gray ash that streaked all the way to the door. In that ash, the villagers saw clearly dozens of footprints, as if someone had walked through the ash and out the front door

That village no longer stands on the Evenmere. They say that its population died out, each generation born there smaller than the last, until finally, its final denizens left to find their destiny elsewhere. But, those with lineages that reach back to that ancient place tell a story of its demise. The children of the village, they said, were called to the Marsh Mother. The ghost of Jevirelle that even now wanders the marshes and moors whenever the Eye looks down from its perch in the night sky, in search of children to join her orphans, forever under her care.

Check Out All These Character Skins

Community Journal: No Tricks, Only Treats!