For a long time, there has been no magic in world of Elyria, so people had to find another tools to rely in their everyday life. To heal ailments, people searched for herbs, to overcome difficult terrain, wagons and ships were build and to protect themselves and their loved ones people embraced the heat of the forges…

As long as anyone can remember, Dragon’s Tooth has been providing the denizens of Gladal County with a means to protect themselves. Different weapons and armor made from iron, steel or leather were crafted by skilled blacksmiths and tanners of Dragon’s Tooth and supplied to local military, as well as sold to anyone who wanted a sharp axe in their hand or a sturdy armor on their back.

However all things change sooner or later, while Dragon’s Tooth was content with supplying local population, in a world of growing tensions and rising threats from raiders, wildlife and daemons, the guild saw that it has an opportunity and need to expand.

Not only for smiths? Despite being primarily a blacksmith guild, Dragon’s Tooth will also be recruiting merchants and other crafters.

If our guild is hired to make a shield, it would be useful to have an expert woodworker at hand, or if a blacksmith is asked to make a lock, they would likely need a tinkerer to help with the internals. By the same reasoning, a blacksmith may not be able to produce, run a shop, find a market for goods, transport and then sell his goods. For this reason we are looking to recruit merchants and strike deals with other guilds and businesses.

Why Should I want a branch as a noble?

Dragon’s Tooth will also have a major focus on cooperation with local militaries. This will benefit us and the local military. We get more business, while they get access to a reliable supplier of gear. More branches also allows us to progress faster and have more technologies to use.

Why should you join our guild over starting alone: 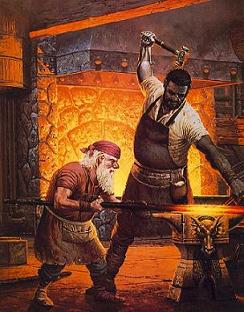 A major worry of many blacksmiths will be having the premises to be able to carry out their work, as part of the guild you will have access to blacksmith crafting stations.

As a guild linked to the county in an official way, it allows for investments from the county into buildings, forges, shops and also allows access to supplies and resources more easily.

Be part of something bigger

As part of a guild, you have the chance to work with others if you desire. This gives you the ability to work towards new technology and techniques at a faster rate.

As the guild will have official links to the county military, although not having exclusive rights, we expect the bulk of the county’s military to be supplied with gear from the guild.

Any members who want to be a blacksmith nearer the front lines will be able to join the Auxiliary Forces either full, part time or on contract.

Be part of a community

If you are worried about playing alone, joining Dragon's Tooth will give you the opportunity to play with similar minded players and receive the support of others.

Leader of the guild.

Head of the guild in one city.

A member/employee of the guild.

Can't wait to buy our equipment from you.

Proud to announce that we have just passed 10 members

Nice, i like to see fellow blacksmith's joining to bigger guilds, love to see my own guild rise so good luck.

The Blacksmith Guild "The Rusty Hammer"

We will be working together with the Rusty Hammer Blacksmith's guild

We are still recruiting!