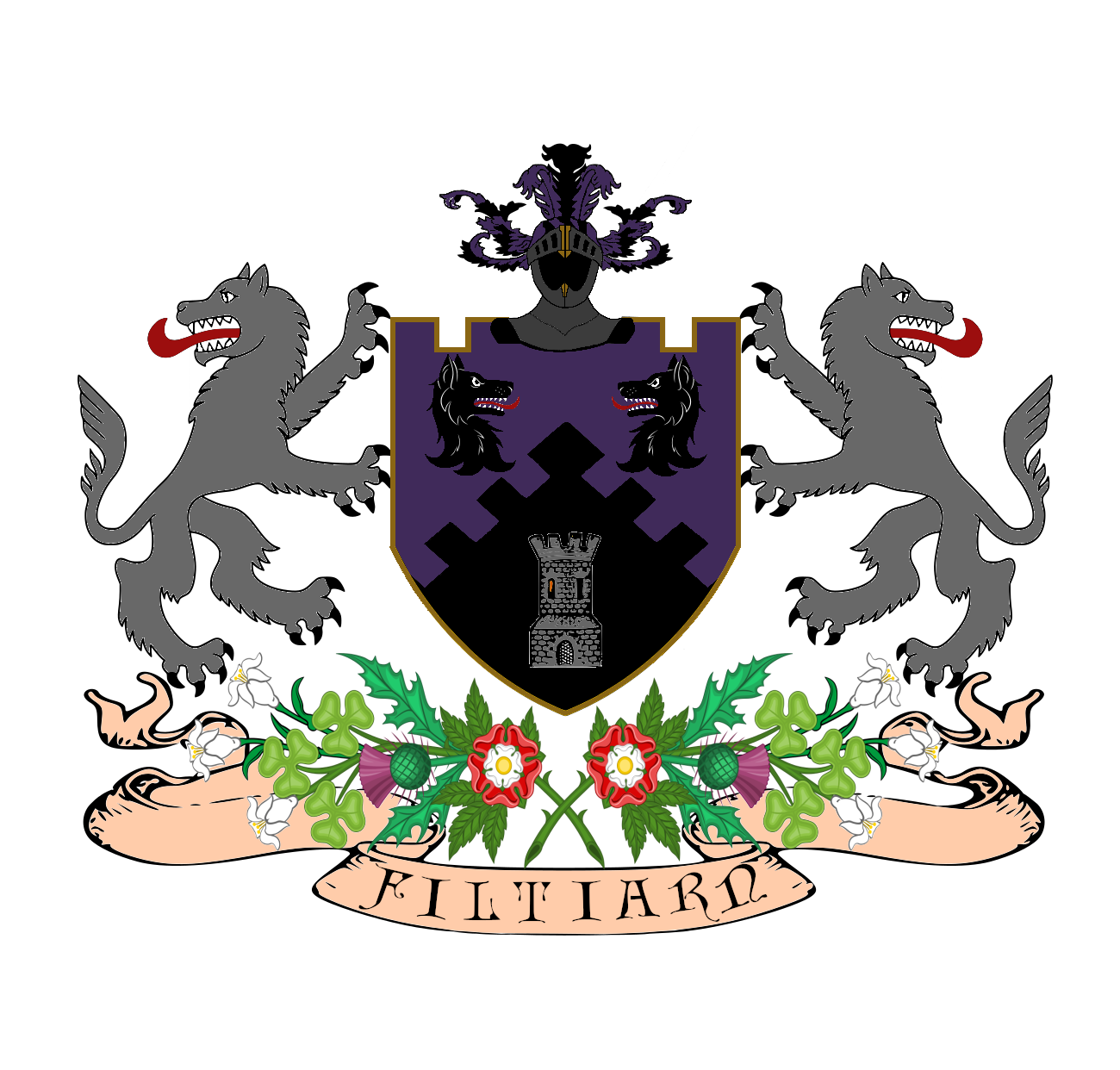 Filtiarn was established in ages past and has been ruled by the Wolftrax family since its creation. The town is located in the duchy of Tyr Nansur in the kingdom of Al-Khezam and Largan Wolftrax serves as a pledged Baron to Lord Rhaegys Audran. As a barony there is a strong military presence serving for the continued defence of the realm.

Although focused on defence, Filtiarn’s gates stand open to its allies. Merchants and craftsmen thrive selling both to the Baron’s army and the citizenry; blacksmiths, miners, tailors and more all find a home and solace within its walls. Beyond the city gates exists a thriving agricultural community that serves to supply the domestic needs of the city as well as generate trade opportunities through its array of goods. The fields and forests outside of the city walls also serve as the setting for the Filtiarn Academy, a beacon of enlightenment risen from the ashes of an ignorant past. The Academy furthers the causes of research and seeks to advance access to knowledge and skills not only within Filtiarn, but across Al-Khezam; in partnership with all academic institutions that share this tenet.

Filtiarn is a place where people of all walks of life can find a home; be they simple farmers, merchants, scholars, adventurers or professional soldiers. 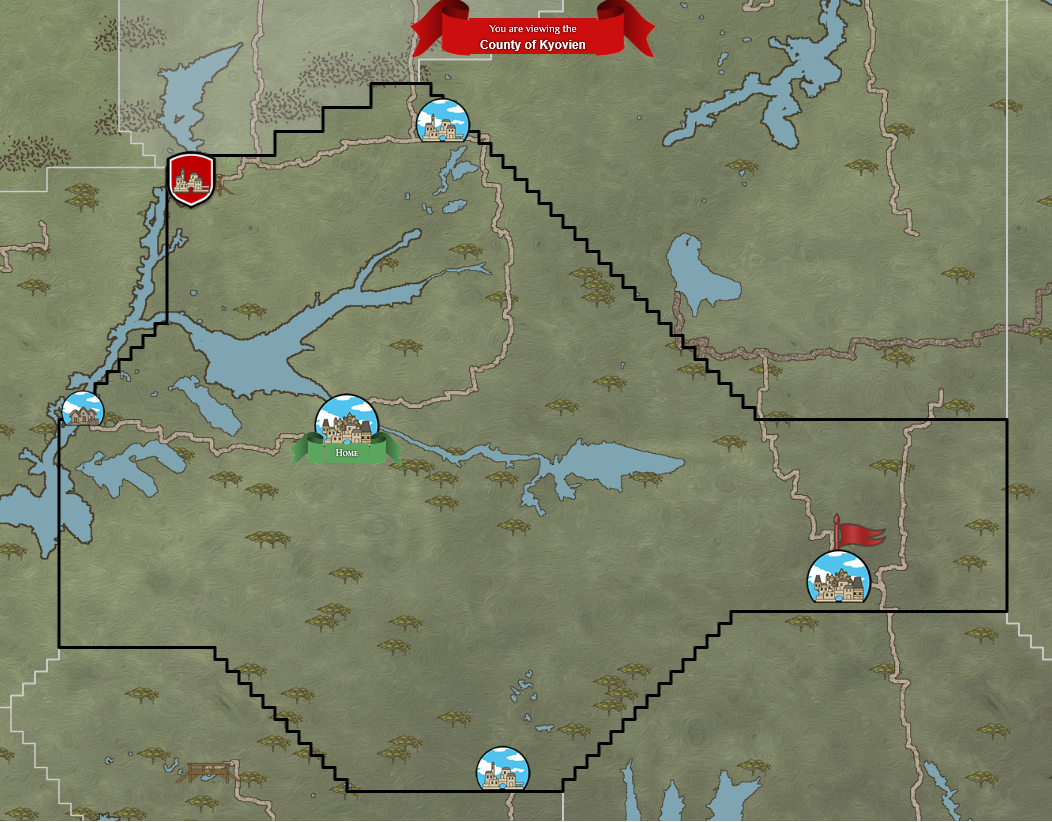 Since domain and settlement selection we can now say with certainty where Filtiarn will be located. If you were to look on the map for Selene you can find Filtiarn through the following areas;

Filtiarn itself is located slightly west of the centre of Kyovien on the banks of a river. This is an ample location for trade and other resources. 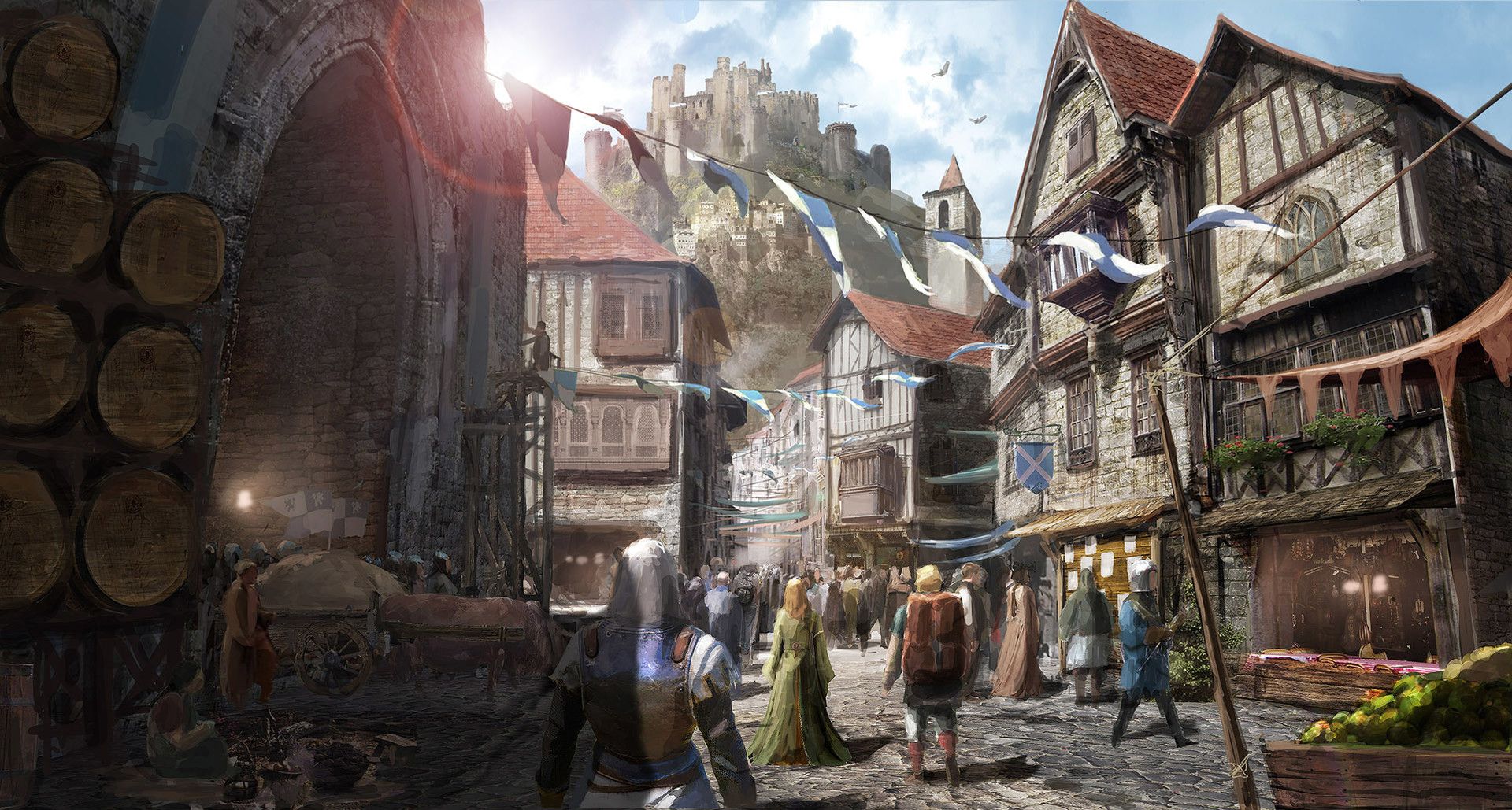 The Filtiarn Army is a formal military organisation based in the town. Its sole purpose is to protect Filtiarn, the outlying lands and the wider kingdom whenever necessary. Members of the army act as soldiers who make up the armed forces of the city, under the command of the Baron. They will act in a dual role as town guard in times of peace and an army in times of war. Soldiers are expected to strive for the highest standard in combat skills, uphold the law and protect the citizens at all times. The military will also have a formal barracks and combat training area within the town in order to maintain combat readiness and facilitate constant combat training. Members of the military will be adorned with a formal uniform, identifying their role and confirming their allegiance to Filtiarn and the reigning Baron.

Main Aims Of The Military

Whilst not enrolled into any arm of the military, merchants and craftsmen are expected to be vital to the organisation's success. Craftsmen and skilled labourers who wish to assist in the endeavour will supply the military with weapons, armour and other resources purchased by the city under the authority of the Baron. This will not only ensure the security of Filtiarn, but it will generate a strong economy and constant work for all forms of labour. 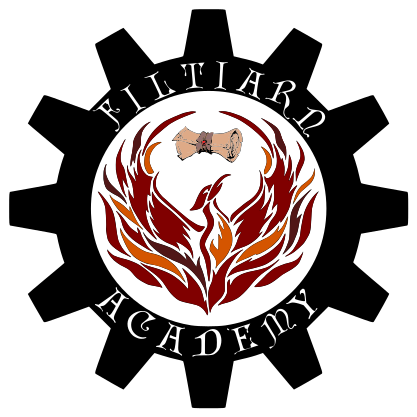 Filtiarn Academy is located outside the city walls of Filtiarn itself. It was founded on the ruins of Filtiarns Oak Library; which was burned and destroyed by an ignorant and fearful population during the Searing Plague. Nothing of the original library remains and the few records that were saved have been handed down by the Virith family, who have always valued education and intelligence above material gain and power. Struggling for generations to safeguard these records, they thankfully found an ally in the Wolftrax family.

Baron Largan Wolftrax saw the benefit of an educated population and using his family’s power and resources commissioned the construction of the Filtiarn Academy, under the stewardship of Nil Virith. As a result, the academy exists in a relative state of independence. Outside the city walls, built as both a scholastic institution and its own fortress, the Academy pursues its own goals without interference from the politics of the world around it.

The Virith family created the Academy with the aim of gathering knowledge and skills from throughout Al-Khezam and the kingdoms of Elyria, and then disseminating it through the population.

Main Aims Of The Filtiarn Academy

The Academy aims to conduct constant research, and is open to cooperation with all other academic institutions, linking themselves through the trade of goods and information.

All scholars are welcome, and travellers are encouraged to enter the academy and share what they know!

From the ashes of ignorance, wisdom burns. 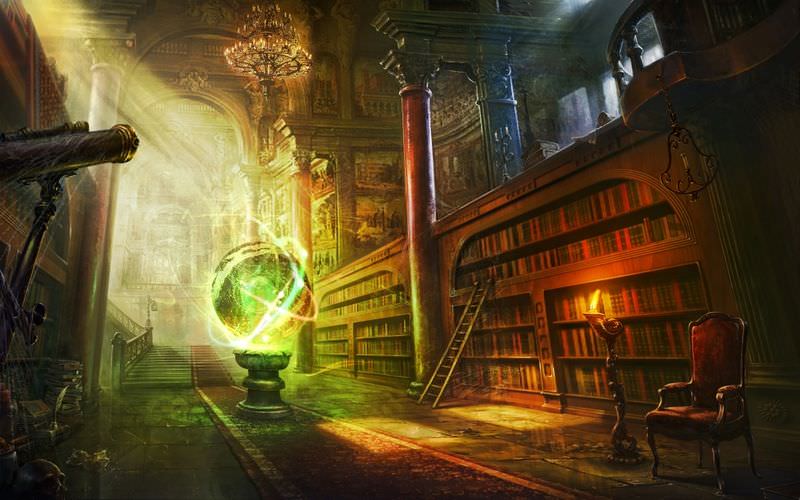 As I touched on previously Filtiarn enjoys an abundance of water and a substantial trade route. For those of you who are interested, this section will lay out the resources we know are available from launch as well as some of the other facts and figures relating to the settlement.

Constructions to be placed during exposition

It is important to remember that this breakdown is only what the town will look like from day one. As we move forward it will evolve and change into what we make of it, new buildings will appear and new professions will be learnt. Together we will build on what is already a good start and create a strong prosperous place to call home. 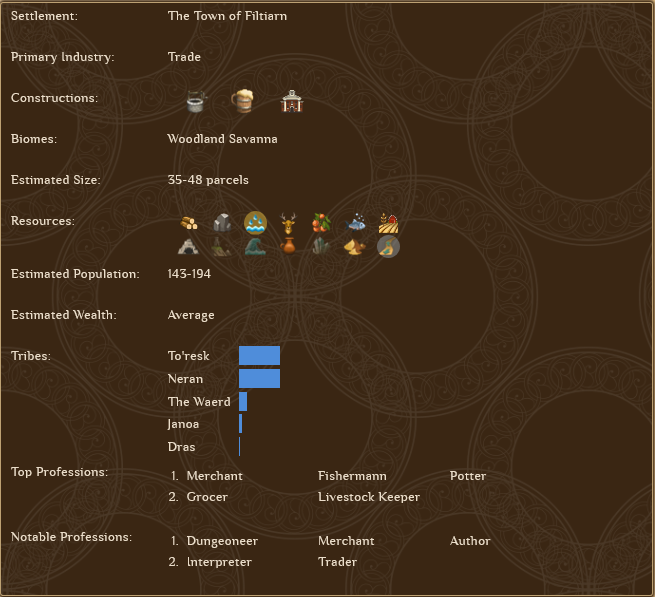 Baron Wolftrax rules with the assistance of an advisory council. Traditionally this is comprised of the Baron and four members that represent significant areas of interest; The Academy, merchants and labour, the military and the general citizenry. While the Baron has power to take action unanimously he relies on the advice and wisdom of the council to help guide the town and ensure his people have a voice.

The Council provides all citizens with an identifiable point of contact, with whom they can voice their troubles or needs with the assurance that the Baron will be notified, and the issues addressed. Council sessions are closed to the public but the council does make itself available to the public on specific occasions. Furthermore the members are available at all times for citizens to address directly, if they feel immediate action is required. The council does not dictate over the lives of Filtiarn’s citizens, it simply administrates the town in order to ensure the happiness of its people and the care of its organisations. Council members will not have authority over their fellow citizens and the Baron is the only member of the council who can wield executive authority. 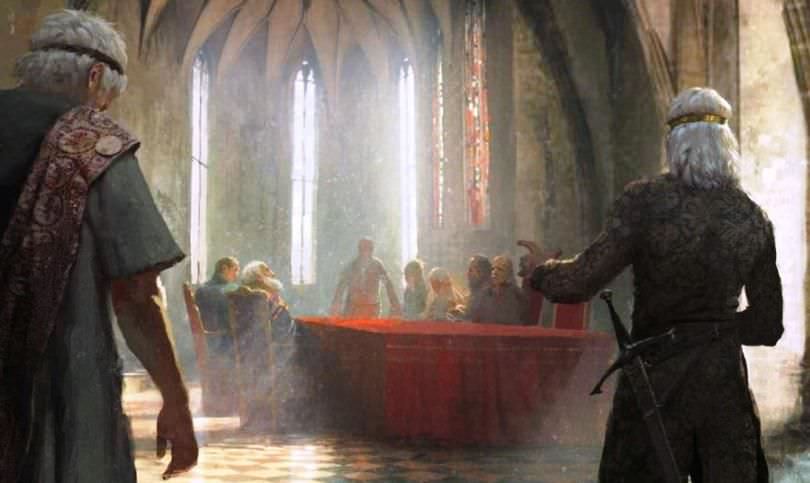 The towns various organisation work as joint components of a greater whole. The craftsmen, farmers and merchants supply the army, which in turn protects the realm. The academy provides teaching and research on areas such as agriculture, animal breeding, medicine and other scholarly pursuits. It also provides vital assistance to the military and the council with technological advancement and the ability to craft new laws to benefit all parties involved.

Filtiarn exists to accommodate the multitude of roles the citizens of Al-Khezam may wish to fill. Soldiers, scholars, merchants, farmers; even the travelling bard! Whether you’re looking to settle or just passing through, enjoy a flagon of mead at the Bubbly Baron and welcome to Filtiarn!

Special thanks to Calligo Mercator of Mercator Inc and Rhaegys of The Nansuri Ship Assembly.

A reminder that the objectives listed in this forum post are based on our knowledge of COE so far, These are subject to change as more information becomes available.

Anyone looking to join, please feel free to DM me in discord if you have any questions.

Due to recent events I must remind you only to join the Filtiarn discord if you are looking to join the town and kingdom. If you have further questions before joining you are also free to join.

However, do not join in order to promote your own settlement or organisation or to attempt to poach members of our community.

Would recommend anyone, specially research oriented people or knowledge seekers, to settle at Filtiarn. Filtiarn helped me zone in on how exactly I should carry out my in game plans, Wolftrax and Nil Virith(The headmaster at the academy) were very welcoming and helped me figure out how to integrate and adapt my own game plans into their city and academy.

While I am a 'hardcore' gamer, this is the first time I'm going to play an MMO with any serious intent and joining a community to do so. Looking forward to learning more about this community and how to be part of it.

I will recommend this town to everyone. The baron and head of the academy have helped me very well and made me feel welcome to the community. I will fullfill the role of blacksmith but we need people like tailors and farmers as well. Lookin' good. Can't wait to visit it myself in-game, and trade for some juicy knowledge. ;)

I have updated this forum page to match new details since the abdication of Dragor.

I have recently added new details which includes or location and some figures from domain and settlement selection. I hope this gives everyone a more well rounded view of what Filtiarn will be from launch.