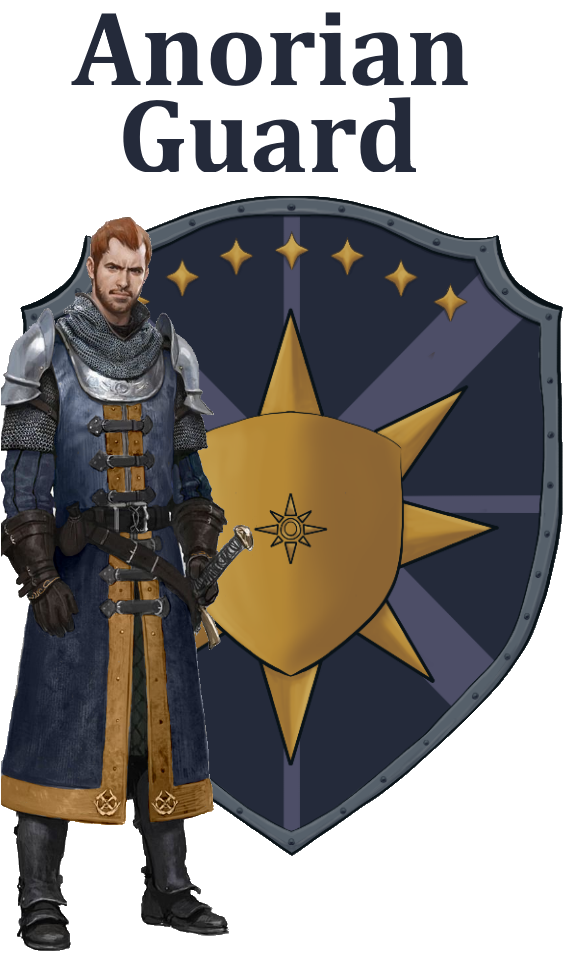 The Anorian Guard is calling all would-be soldiers, scouts and defenders of the land. Ours will be the duty of securing Anorian territory against threats within and without, to put enemies of our Duke and our King to the sword.

The Anorian Guard has a focus on mobility such as mann-at-arms, archers and scouts, we plan on running patrols along our major roads and around our larger settlements. We would train experts of the terrain, superlative archers and horse riders - menn and womenn capable of hitting moving targets from the tops of our guard posts and walls or riding down the enemies of the duchy. Other weapon training will be provided, seeking to leave no potential advantage neglected.

The strength of the Neran (the swords of Virtori), is the balance of flexibility and defensive power, and our strategies will play to these strengths:

The most gifted horse menn will form our scout detachment, gathering intelligence for the military and denying intelligence to the scouts of would-be invaders, taking the role of the Anorian Guard's sight and the arrow that deprives the enemy of theirs.

The most talented archers will mann our defences, patrolling around settlements and keeping any threats at bay with flurries of arrows, putting down enemies before they can reach the walls. These are Rangers.

Those who prefer combat face-to-face will join the glorious vanguard in offensive military operations against any who might seek to take our lands, as well as forming patrols during peace-time.

All Anorian Guard will be proficient with Horse and Lance. This is due to the grasslands steppe where they reside.

​When not given specific orders, our Guardsmenn will have a "job board" where paying tasks in need of completion can be listed. Training will be an active and on-going process, aiming to keep our soldiers not only skilled but also entertained with mock-combat and non-lethal duels. ​ The noble menn/womenn who defend our lands will be well paid and be provided the best equipment, training and opportunity for advancement. Those with the potential will be selected for elevation to the Knights of the Sun, who act as the officers of the Anorian Guard.

If you aim to be the best; The Anorian Guard is the place for you.

The ranks will be as follows, in ascending order;

Mann-at-Arms/Womann-at-Arms: Here your duties will be expanded, advanced training begins, and you will be rewarded commensurately. This role will form the main body of the Guard, taking part in offensive and defensive military action. When you've completed your advanced training and demonstrated an aptitude for a speciality, you may be selected for promotion further.

Sentinel/Ranger: Veterans will be experienced soldiers, whether they specialize in swords, archery or other forms of combat, forming the tip of the vanguard, acting as bodyguards and taking the most dangerous and rewarding duties in defence and attack. Rangers will be the most mobile arm of the Guard, scouting out enemy positions and encampments, performing counter-intelligence, harassing and assassinating trespassers and invaders.

Serjeant-at-Arms: Here you become an officer of the Anorian Guard. Your duties will be expanded and you will lead the Mann-at-Arms and Womenn-at-Arms. This role will form the first tier of officers of the Guard. Duties will include ensuring effectiveness of the guardsmenn taking part in offensive and defensive military action. When you've completed your Serjeant training and demonstrated an aptitude for a speciality and leadership, you may be selected for promotion further.

Captain: You have risen to become a Captain for the Anorian Guard. Your responsibilities will be expanded further and you will lead the ranks of Mann and Womenn of the Guard below you. This role will form the highest tier of officers before the Knights of the Sun. You will ensure the welfare, training, equipment and the guards effectivesness taking part in offensive and defensive military action.

Weapons Pike, Anorian Sword and Shield. You will be provided an Anorian short bow and arrows if you seek Ranger path.

Once the initiate progresses to Mann-at-Arms or Womann-at-Arms they receive the following: 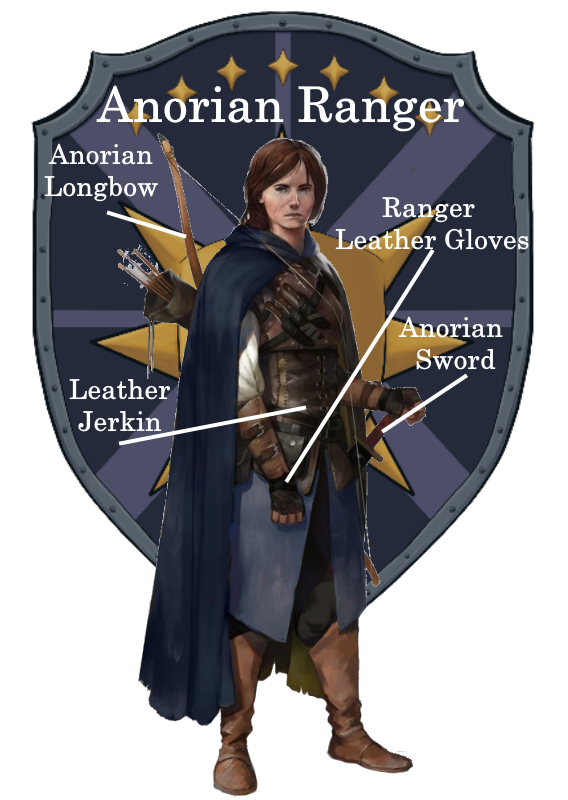 Please note all equipment supplied belongs to the Anorian Guard of the Duchy of Anor. All equipment is on loan to the individual Anorian and must be returned if requested.

The Duties and benefits of Anorian Guard

You will receive both defensive and offensive training techniques in your desired profession. This could be a swordsman or in archery skills or another chosen speciality.

You will get a good starting salary. You will receive bonuses upon merit and recognition to your services to Anor. You will also gain salary increases with each rank. Promotion will be based upon merit, skill and leadership qualities. The titles and privileges will be authorised by a Captain, a Knight of the Sun, Baron or the Duke or Duchess. If your performance has not been to a satisfactory level, you may be considered for performance review that could lead to a demotion.

You will receive the best available equipment for your role and rank within the Duchy of Anor. This equipment is on loan and is property of the Duchy. If your equipment is damaged or broken, you can repair/replace free of charge. If the item is lost due to negligence you may in occur charges. You will also be provided a mount, if your role or rank requires one.

You will be required to live and sleep at your designated barracks where you are currently posted. You can apply for leave from your Captain or Baron if the circumstances can be justified. You are expected to behave to the required standards of the Anorian Guard and follow lawful orders by a senior officer.

You will be provided regular missions to ensure that you are occupied in your role. This could include Guarding, Rescues, Scouting and war for example. You are entitled to the freedoms of every Anorian when off duty, as long it is not unlawful and brings the Anorian Guard into disrepute.

Any unlawful acts of Anorian Guard against the Empire or the Duchy will be dealt with appropriately. 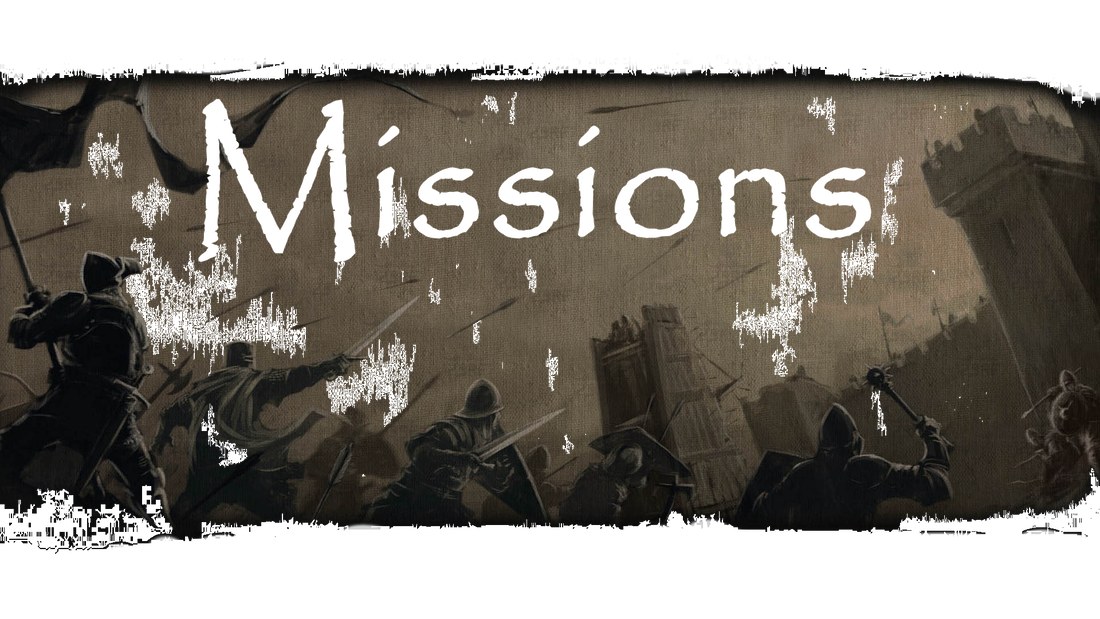 Some examples of what our Guardmenn may be ordered to do, or what they may find on the job board are:

Tasked with going into full scale battle against foreign armies be that either to defend against invasion or being part of a Kingdom wide taskforce to invade an enemy of the Empire.

Tasked with delving into remote distant lands to set up secret hidden outposts, sometimes setting up outposts within caves or ruins that you or scouts/adventurers have recently cleared out. Building traps and defenses against intrusion. Also building watchtowers and other military constructs within the Duchy.

Tasked with locating, evicting and demolishing illegal squatters and their illegal constructs who are attempting to obtain land through adverse possession and refusing to legally obtain the land like everybody else.

Tasked with protecting the land of Anor and it's people when regular guards require a little extra assitance. Often found patrolling towns and cities during times of increased dangers or being sent to vital key areas of the Duchy to protect resources and help deliver resources and goods from one settlement to another.

Tasked on occasion to help clear an area of the Duchy where dangerous animals have congregated and become a danger to Anorian citizens. Also can be tasked with clearing out farmlands of pests that threaten crops and the harvest.

Tasked with searching, locating and rescuing Anorians or anyone else required who are in trouble and in need of help. Be that from being trapped in a dangerous location or them having been kidnapped or attacked by criminal scum.

Tasked with protecting the nobility at all costs from those who would cause them harm.

Tasked with Hunting down criminals that have a bounty on their head.

Tasked with tracking down and eliminating looters, thieves and raiders. Clearing out caves and bandit camps that arise anywhere within the Duchy.

Tasked with delivering important items or information from one place to another when the route taken could be long and/or dangerous to normal citizens.

Tasked with aiding settlements within Anor as and when required.

Tasked during times of conflict with infiltrating enemy territory and sabotaging key areas of the enemies infrastructure and economy.

Tasked with infiltrating using disguise and acquiring detailed information, especially recipes, designs, research and technology and bringing them back for study.

Tasked during times of conflict with infiltrating enemy territory and assassinating key figures and highly important and influential individuals.

If you wish to join The Anorian Guard and become a citizen of the Duchy then please feel free to join the Duchy of Anor Discord. Please click the Discord image above to gain entry. Thankyou.

We are still actively recruiting more military for our Duchy. There will be plenty of opportunities.

We have recently recruited a few more guard.

You will be paid good wages and will be provided the best arms and armour.

We will ensure through our mission boards and Barons that all Anorian Guard will not be bored!

Please see the updated forum thread, imagery and we are awaiting a new coat of arms over the next couple of days!. We also have updated our rank structure!

Join our Duchy's discord to stand with the Anorian Guard and The Duchy of Anor!!!

All able menn and womenn of Waedheald, County of Isilme, will be at your disposal if need be Your Grace. Whether as part of the Anorian Guard permanents or as reserves or militia.

House Wulfcyn and affiliated bowyers and fletchers in Anor will ensure the Guard will never face shortage of airborne swords of virtue.

Best topic ever. I sure will be training with the Anorian guard, every minute that I can spare. I will advice my personal guard to train with your guard as well,

Best topic ever. I sure will be training with the Anorian guard, every minute that I can spare. I will advice my personal guard to train with your guard as well,

Ilyria, as a Countess and all Anorians we will ensure you get the best training available. It will be good to work with you're personal guard also.

All, we are still actively recruiting a mature playerbase for our military. If you are interested please pm/join discord or check out our website.

Anor has recruited more menn and womenn to fight in her ranks.

We have had several Ranger focused individuals join us over last few days.

We are still looking for players who have an interest in combat to join our ranks in Anor.

Calling all able menn and womenn!

The Duchy of Anor needs fighters to bolster up our Anorian Guard (AG). This is a dedicated PvP organisation to defend the borders and our Kingdom's interests.

We will ensure that the members of the AG are busy with rich player created content. You will be able to learn other trades when not defending the walls!

We are currently seeking full time and reserve Anorian Guards to defend our Duchy of Anor!

Sign up at the Royal Barracks of Anor or at the Sun Keep today!

The Anorian Guard gained another member today! We are still recruiting!