I’m Duke Nimb Zephyr of The Anemoi. The winner of The Sunstone on Luna(NA-E).

Please enjoy the lore video above about The Anemoi and The Sunstone.

What am I going to do with all of this?

I’m going to use this to create an organization focused on helping animals during the longest night for real actually within COE. Now that we have The Sunstone, we will do our best to save the puppies!

Thank you again for all your wonderful ideas!

The Orphaned Puppies Initiative and Nimb for Noms

Founded by the line of Zephyr in an effort to care for hungry animals during the Longest Night The Orphaned Puppies Initiative implemented, Nimb for Noms, a program that called upon the generosity of The Anemoi. The people of The Anemoi respect, revere and rely upon the animals they share the land with wild and domestic. The people of the north preserve stockpiles of food within the cold ground of the taiga and share portions out with the animals. As this became a tradition it became a matter of honor to provide what little bit you could to help feed the creatures of the forest. Boys and girls of all ages and notoriety did their best to make sure they always had a little something to give to any animal they came across.

The Anemoi had always been a people blessed by The Stone, but the day the duke returned with The Sunstone changed everything. No longer was it little tid bits for the animals, but a veritable paradise that they could thrive in.

The Duke and The Wolves

Jorva stared at the candle flickering on the windowsill, watching the flame dance and light the room in a warm glow. The world had been cast in darkness for barely three months, and yet he couldn't wait to see the sun rise over the horizon again. It’s funny, he thought, how much you miss the little things you've taken for granted once they’re gone. Running barefoot on the grassy fields, napping under the great oak as the cattle roam around, and splashing in the stream near the village were his fondest memories of a time that seemed so long ago.

He was brought out of his musings by a shuffling noise from his left. It was his grandfather, putting on a coat to go outside, a curious basket laying at his feet. “Where are you going?” the boy asked, hopping down from the stool he’d been perched upon. “Out,” said the old man simply, tying a long scarf to cover the lower half of his face. “Do you want to come along?” “It’s late,” Jorva replied, rocking on the balls of his feet. “We’ll only be a minute.” There was something exciting about the prospect of going out into the cold, dark night, and Jorva couldn't resist. Quickly, he threw on his coat and boots, and followed grandfather into the darkness.

“What’s in there?” the boy asked, gesturing towards the basket, as the couple shuffled down the village road lit only by the soft glow emanating from the neighboring houses. “You’ll see,” said grandfather, and Jorva could tell he was smiling under the scarf. “Have you heard the story of Duke Zephyr and the wolves?” “I don’t think so.” “Well, listen up then, and maybe you’ll find a piece of wisdom in the tale.”

“Many moons ago, before even the father of our current Duke was born, the Longest Night was upon us once again. Back then, the ruling Duke’s heir was very much still in his adolescent years, always looking for adventure, and never one to back down from a challenge. Being locked in a mansion, no matter how grand, for the better part of a year can dampen any young man’s spirit, and so it was that one day, the young Duke-to-be snuck out from under the watchful gaze of his father’s guards and set out to meet a friend, who lived in a neighboring town.

Their food supplies had been dwindling, or so he’d heard, and so the youngster stuffed his backpack full of all kinds of edible goodies. Great was his friend’s surprise when he found the young Duke on his doorstep, bringing with him a bag full of tasty treats. The two joked and reminisced, drinking mulled wine by the fireplace, until it was time for the heir to return to his castle, lest his absence cause a panic. His friend couldn't let him leave empty handed, but had nothing he could have afforded to part with but a small pack of dried meat. And so the young man set on his way with all but empty pockets, full stomach, and a torch to light the way.

In a hurry to get home and hoping to avoid any potential bandit ambushes, he turned off the main road and into the forest he knew as well as the back of his hand. Jumping over fallen logs and dodging to avoid low hanging branches, he was stopped in his tracks by a pair of eyes glistening in the darkness. As he stood still, the eyes moved forward, and slowly, a lupine figure emerged.

The wolf approached, eyes fixed on the man, until it stood but a few feet away of him. The young Duke reached for his sword, but alas, his hand grabbed air! In a hurry to meet his friend, he’d forgotten to bring his weapon. Armed with nothing but a flaming torch, he knew it would be foolish to run – he’d be dead before he could take two steps. Trying to make himself look confident, he stood up straight and looked the hungry beast in the eye as he backed away slowly, but for every step he took back, the wolf took one forward, and the youngster realized his escape wouldn't be that easy.

For a moment, things looked grim, but then, the young Duke had an idea, one he was hoping would be good enough to save his life. He reached into his pocket and pulled out the pack of dried meat his friend had given him. Carefully unwrapping the pack, he picked a piece of jerky and tossed it to the wolf. The beast moved over to where the piece had fallen and gave it a cautious sniff before quickly devouring it. The young man used the moment to his advantage, and quietly moved back, all the while keeping his eyes on the wolf, and tossing it a new piece as soon as the first one was gone.

Escape felt so close, until he heard rustling behind him and as he turned around, came face to face with another member of the pack. Overtaken with fear, the man prayed for a quick end and closed his eyes as the creature moved closer, but the attack he was waiting for did not come. Instead, he felt something warm and wet brush against his palm, and opened his eyes to see the wolf licking his hand, before giving him a nudge with its nose.

Now having a better look of the creature, the young man realized that the terrifying beast he’d been so scared of was barely a pup, no more than a few months old. Confused at first, the young man quickly realized what he had to do, dropping the entire pack of meat on the ground and moving away slowly. 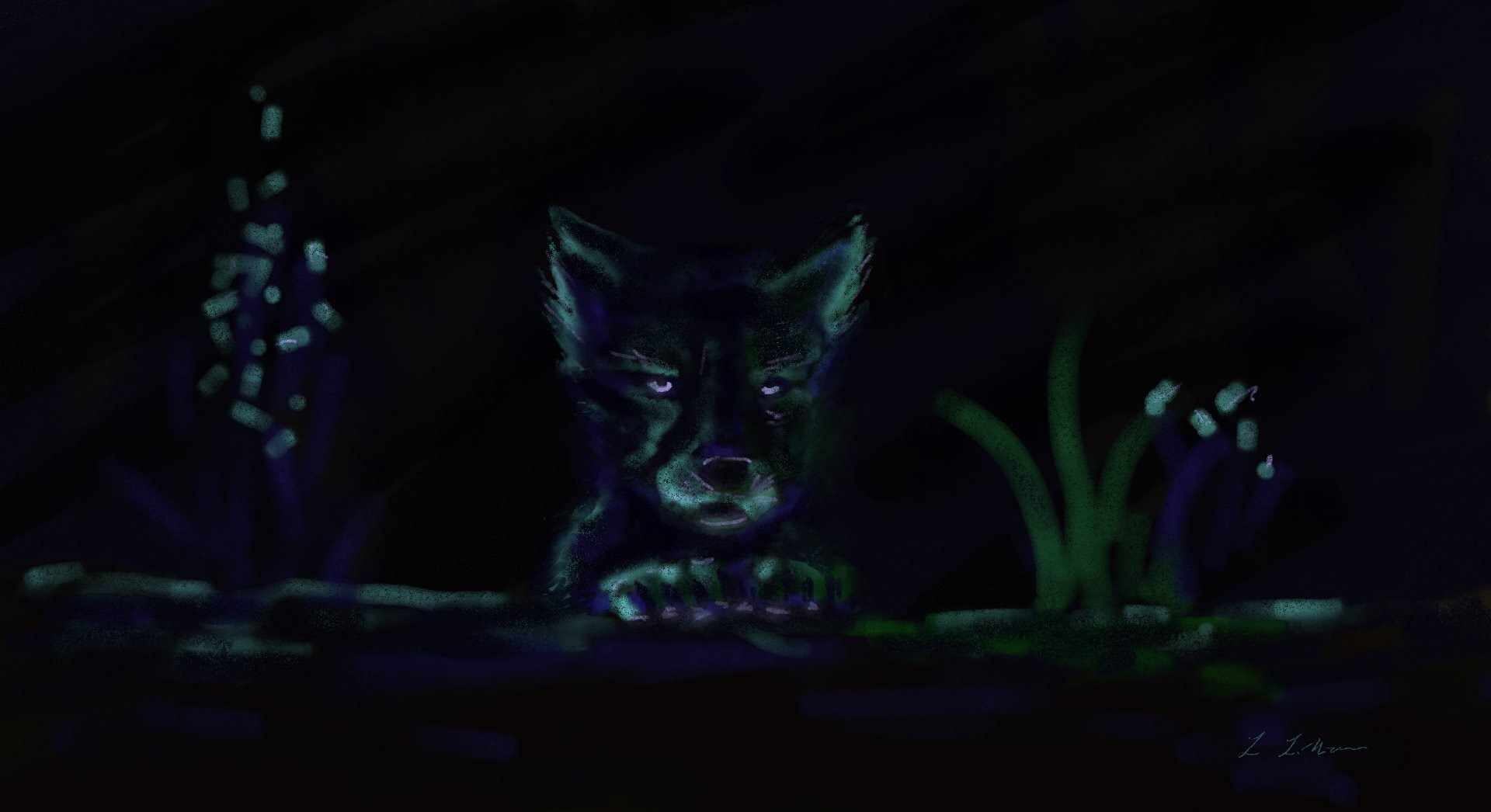 The wolf showed no interest in following him, instead focusing on the package, soon joined by its mate. To his dismay, the pair finished their meal faster than he’d expected and turned their attention back to him, but instead of moving closer, the wolves simply followed him with their gaze before turning around and heading back further into the forest.

Having retreated far enough, the young Duke turned around and ran back to the castle as fast as his legs could carry him. Knowing he had just escaped what should have been certain death, all over his own foolishness to leave the castle, he chose not to speak of the incident for many years, until his father passed away, and the burden of running the Duchy fell to him.

From then on, he taught his children, as well as his loyal subjects, to respect and understand all living creatures, and care for one another during the darkest hours of the Longest Night. This principle is also followed by our current Duke, who after finding the treasured Sunstone set out to provide food and shelter for all defenseless animals that might need it during the time of darkness.”

The boy and his grandfather had reached the spot where the forest bordered the village, and the old man set down the basket he’d been carrying, revealing it to be full of meat and berries. As he emptied the basket, the boy watched on solemnly, listening to the sounds of the night. 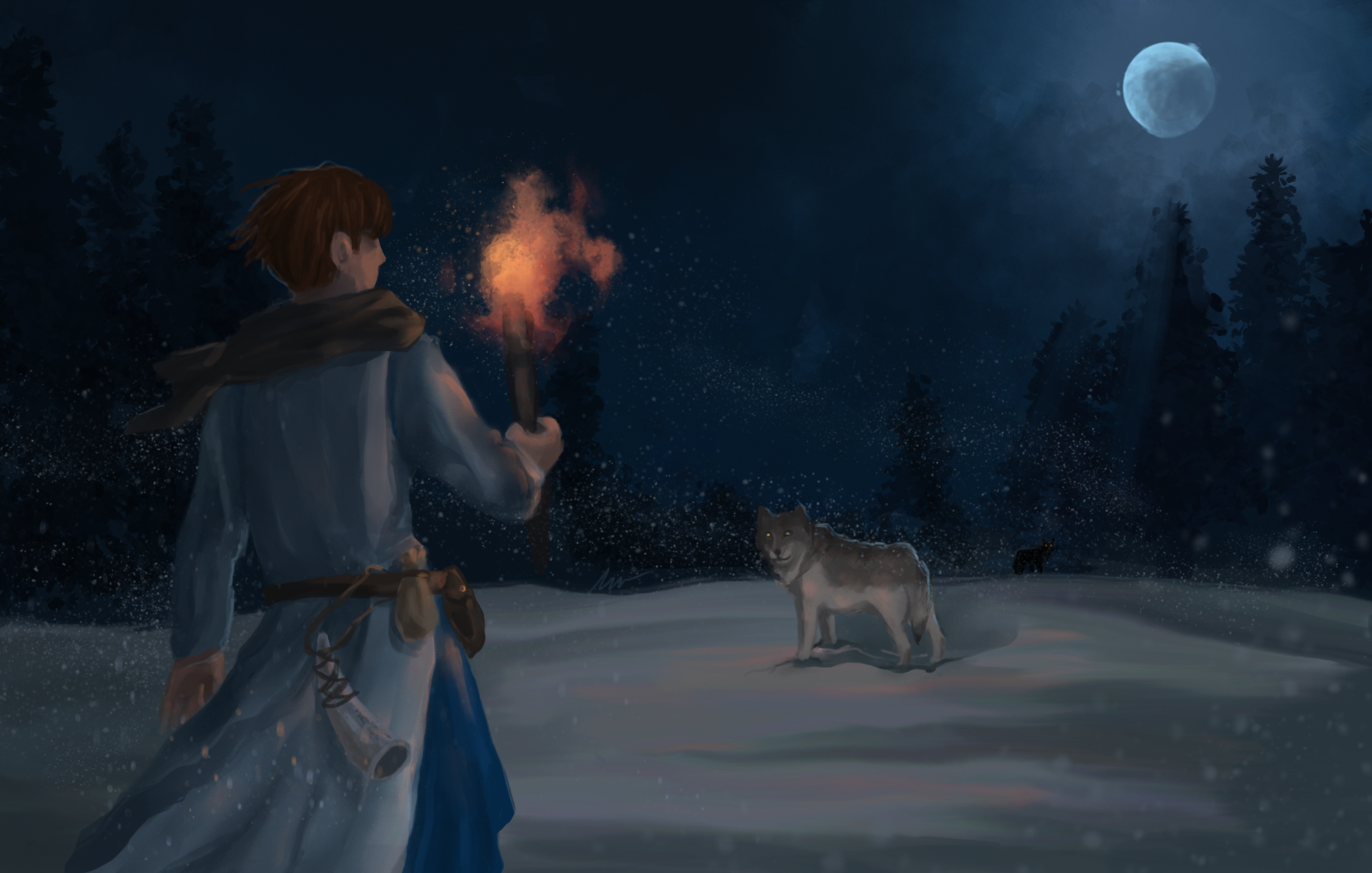 “Is this where you've been coming these past months?” he asked. “Yes.” “But we could've used that food.” “We have enough,” the old man said softly, ”but what about stray dogs and cats with no one to look after them? What about all the flower-cup porcupines and conifer rats who find no comfort from the frozen ground? And what about the wolf pups left to fend for themselves because there’s no food for the entire pack? Don’t they deserve a chance to survive these trying times?” “They do,” Jorva nodded, as grandfather gave him a soft pat on the shoulder. “Next time the Longest Night comes around, we won’t be here anymore, but your children will be, and so will their children,” the old man said as they started on their way back home. “Will you tell them the story and what to do when the time comes?” “I will,” the boy said, and a faint howl echoed through the woods.

Credit for this amazing story goes to DiCe. Truly thank you from the bottom of my heart, Picture with 3 pups created by Violetwinterlynn, Adorable pup looking over the log created by Lady Grace, and Brave hero and wolf created by Elsy

You can submit your entry via discord: Duke Nimb Zephyr Ⓥ🗿🐧⚰#1848

Or by posting it here :)

Huzzah All hail Nimb, Lord of the Stones!!!

Out of Strife, Prosperity

An example of why I need someone who can actually create art lol... This is how bad I am... 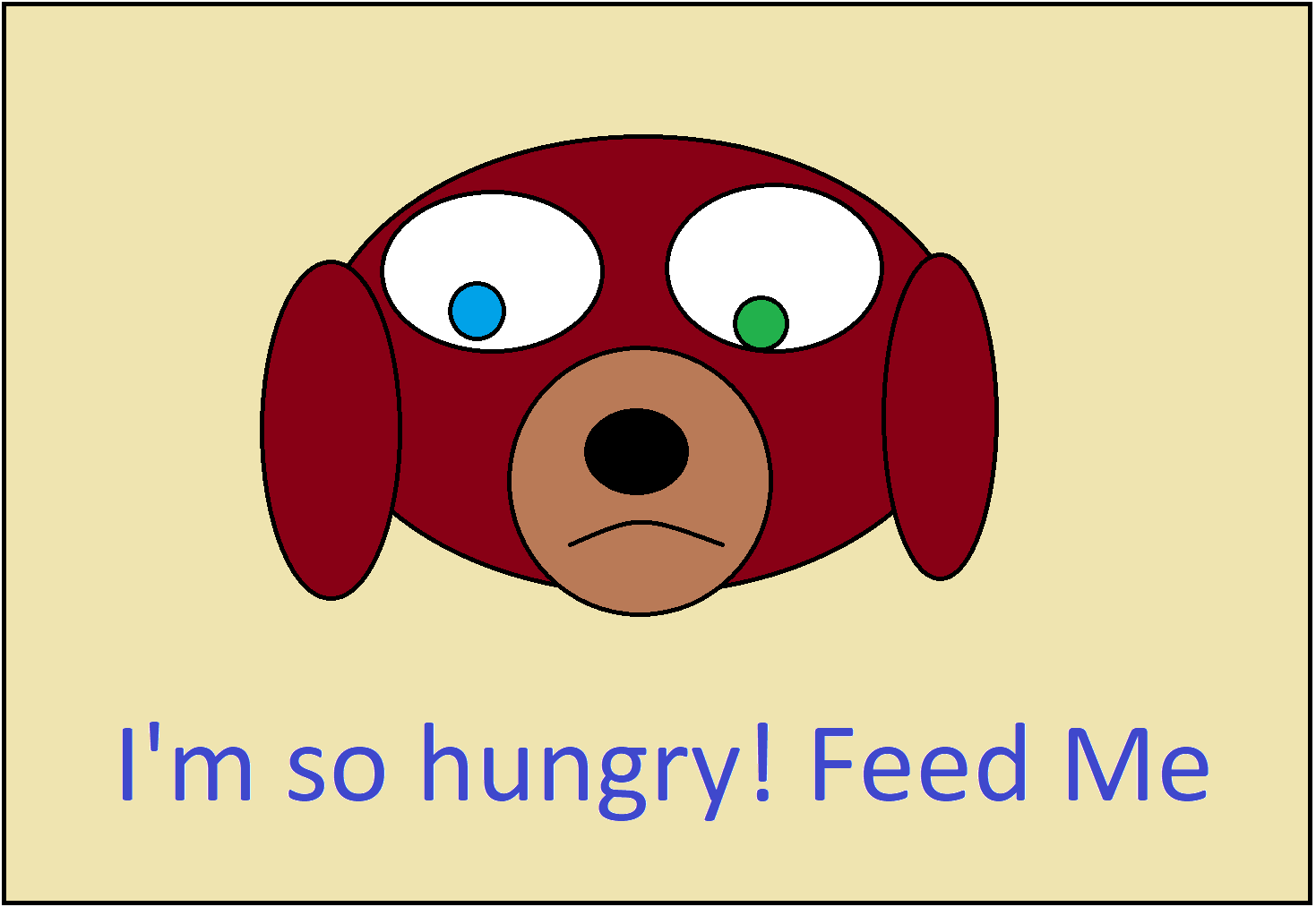 Updated formating to make it easier to read. :) Thanks to those who have sent PMs asking questions. 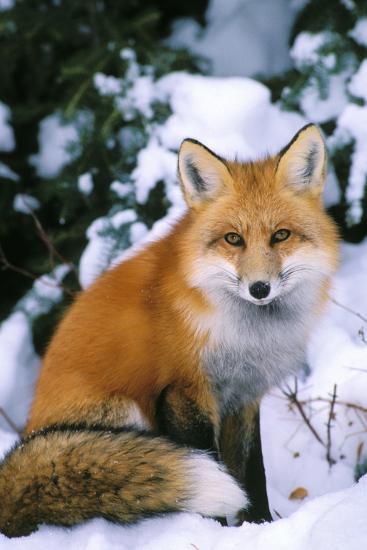 if i had my time my GF could bust out her paints and air brush. An i could toss a story but i have no time lol

Kyovolk over here acting like he has a GF...

Good questions being sent :) You do not have to do all the pieces. Even if you only have a small contribution you want to send in. Please feel free to.

This is a super cool and cute event! I wish I had the time to do some art for y'all. Good luck!

Thank you everyone who participated! Will be announcing winner as soon they send me their account name and I send them EP.

Updated with story and new contest!

That was an amazingly heartfelt story. DiCe did a fantastic job, and i can see exactly why you used his story Nimb. Bravo DiCe, Bravo.

Out of Strife, Prosperity

Text, font etc can be adjusted later if wanted but heres my entry 🙈

Text, font etc can be adjusted later if wanted but heres my entry 🙈

Thank you for the entry!

Woot and more entries via PMs! Thank you for your support!

good luck to all of you