Welcome disillusioned and weary traveller! You’ve done well to get this far.

Below are some initial background and details for a lore-rich Waerd settlement located in the semi-arid desert on the lucrative border between kingdom 3 and the Kingdom of Caprakan on the Oceanus server. This town will provide a unique experience to those who have the tenacity and determination to grab hold of fear, turn it upside down and shake all the coins out it’s pockets!

If you feel the intoxicating pull of the semi-arid desert, feel free to poke around the Ichralárch Discord.

A Dead Travellers Guidebook to hell... 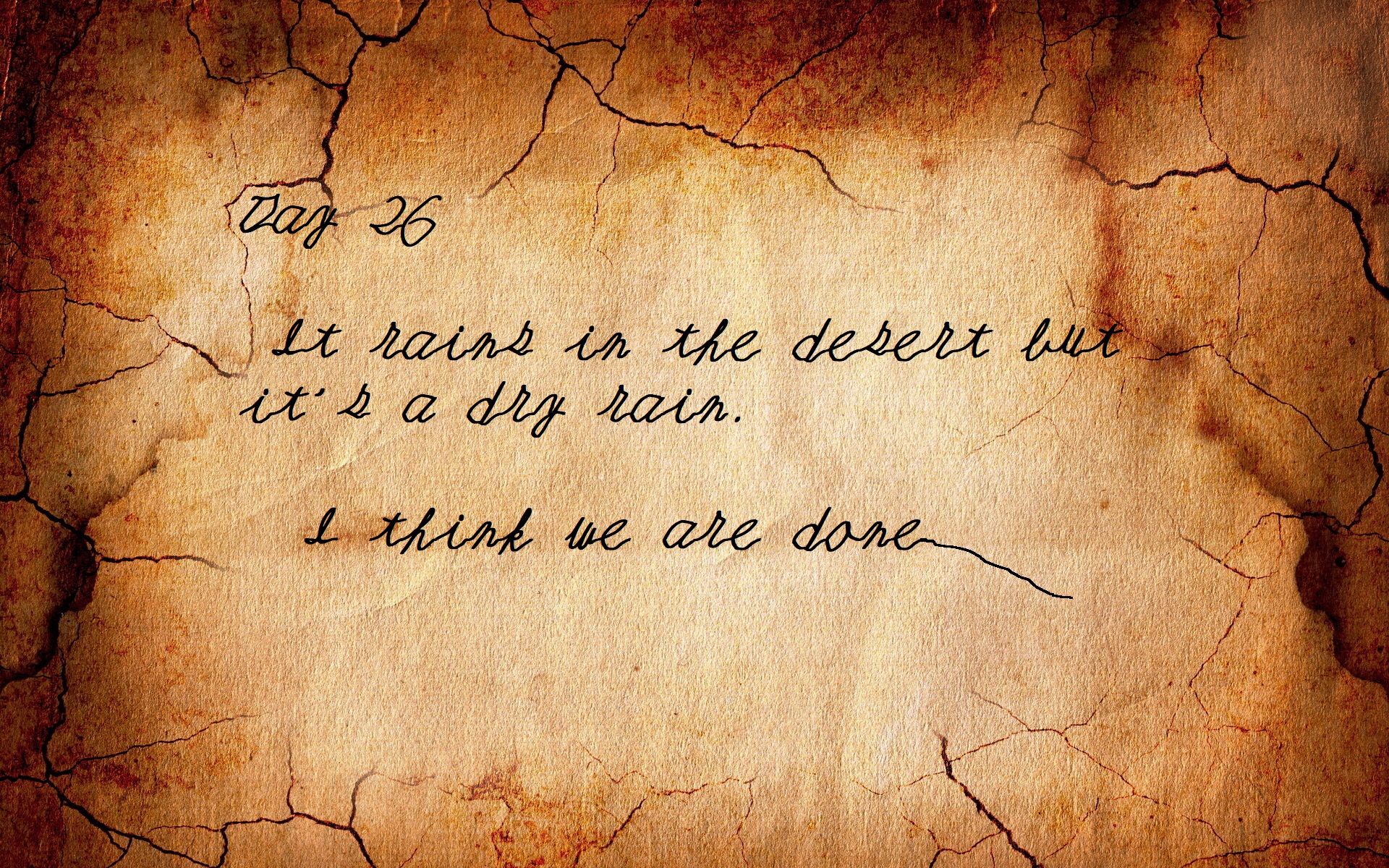 The Desert is home

Get lost...and find yourself

There are strange things out in the deep desert, far beyond the stunted trees and odd grasses that struggle to find foothold in the dry packed ground. To outsiders the deadly creatures, plants and landscapes appear to exist solely to torment and harm.
But of course there is life out here, you just have to know where to look. 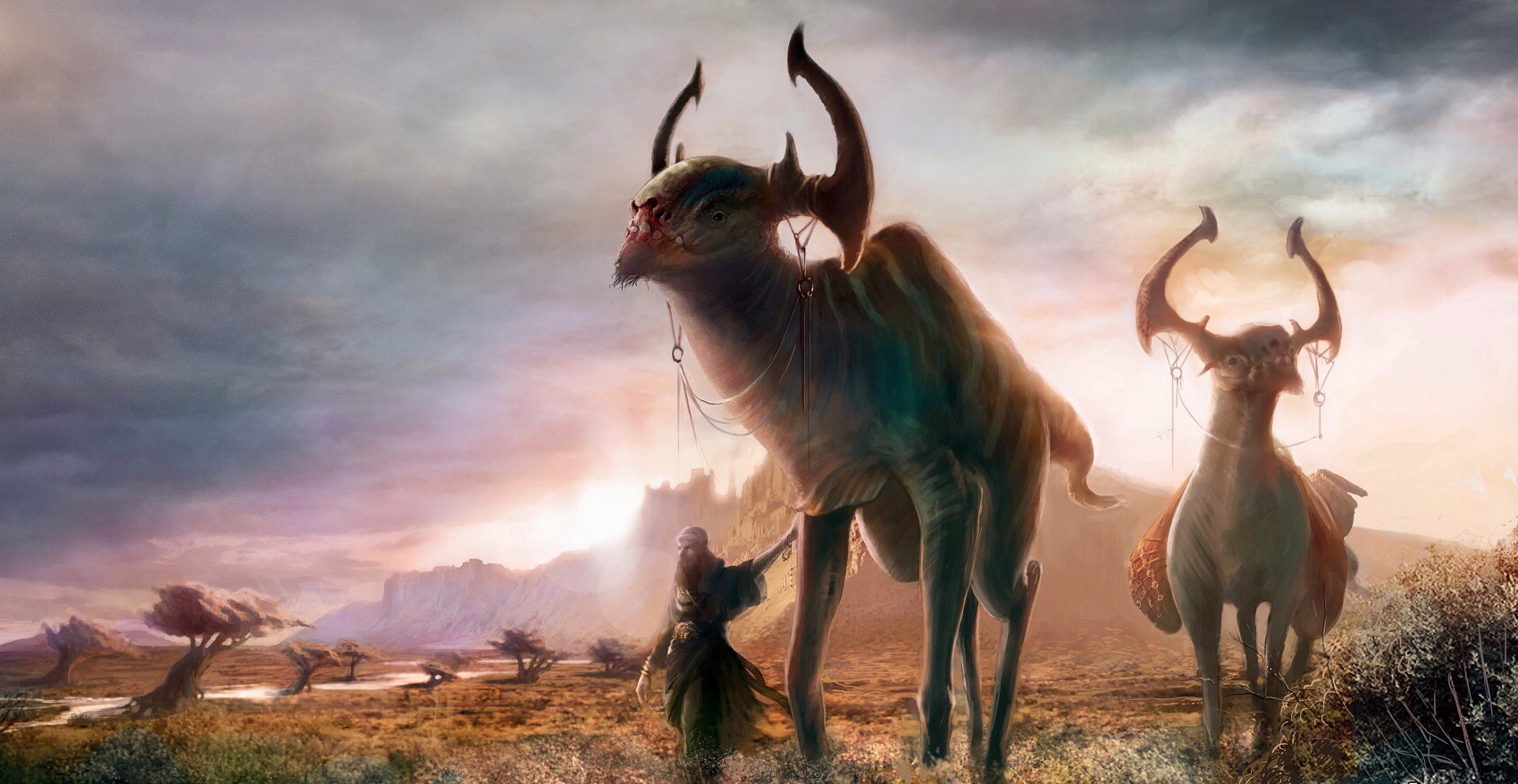 Travellers would be lucky to survive out there without the help and service of our caravans and guides. The guides find their way across endless stony plains and shifting dunes by chanting and breathing Our ancient tribal stories and songs...almost as if they were breathing the dry air itself.
Each word and verse is far deeper and more meaningful than they first appear. Chanters find their way to sand-drowned landmarks and to the hidden traces of water that can keep us all alive long enough to glimpse the stark truths of the Two Fold Queen.

This is where We, the hardiest few live, having made the best of the worst of situations. Trade routes are being established and towns are forming on the edges of the great wastes. Families and communities are growing.

But there are are also disturbing rumours of strange things being unearthed out beyond the blackened beyond. Yet, We seek them so We can shine light on that dark. 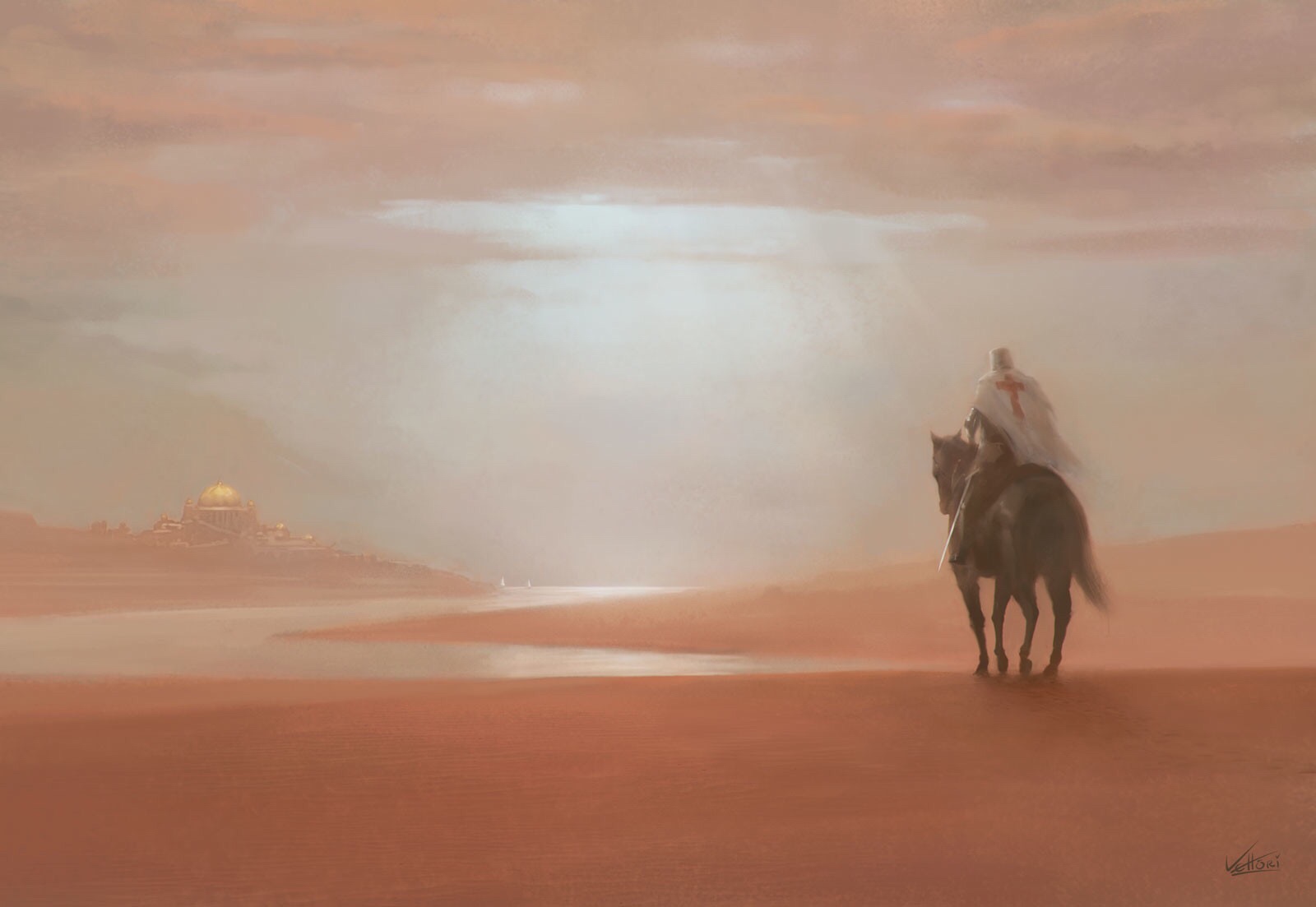 The Waerd name for this town is Ichralàrch. In Neran-speak this means ‘Vipers Gate’. It was named an age ago by my family who named it after the horned desert snakes that would pass through this place in times of searing drought, attempting to escape death by seeking the vestiges of water that lie in the nearby swamps and bogs of our cousins the Dras.
Though the snakes kill some of our old, our children and our livestock, We in turn kill and eat them for food and use their skins for clothes and trade.

All in equal measure and all in balance...as She wills it.

Development of town infrastructure such as schools and the trading hub as well as the ‘Silk Road’ that runs through it, will see trade flow like hot blood through an artery, taking wild exotica from the jungles to the south to the famous Last Oasis in the north.

the snake on the border 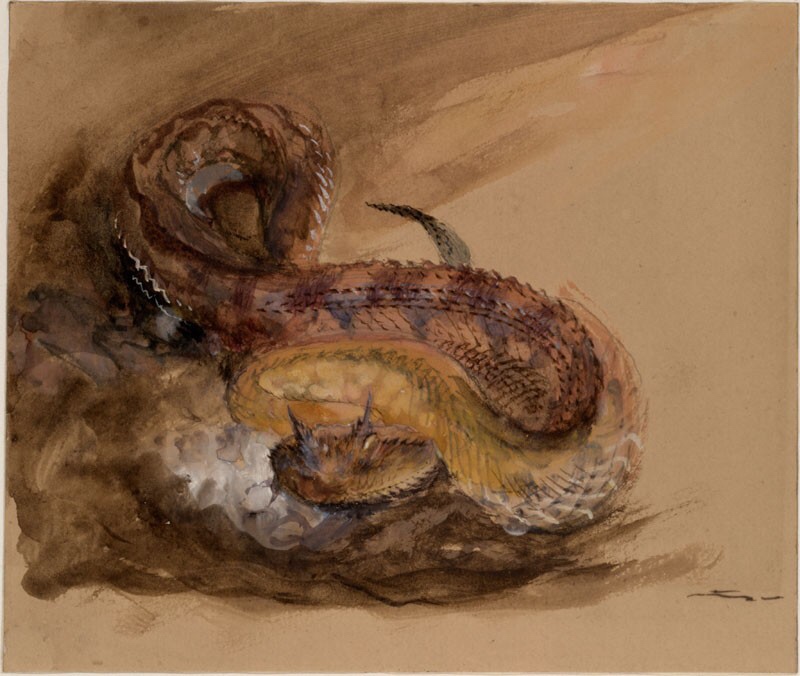 So now the name of Ichralàrch also symbolises the balance and opportunity brought to this borderland region by the Horned Snake of Caprakan, Prime of the South. He has gripped both the Crown and the beating heart of the southern kingdom from his rival.
It is true that some help, information and support to the Prime’s righteous cause was provided by Us. This was the will of the Two Fold Queen, whose perfect and divine instruction was given to me by the Al’tifali priests. It was Her will that the Snake crush the Skull, not my own.

So balance has returned...for now...and we can turn our eyes outward again. 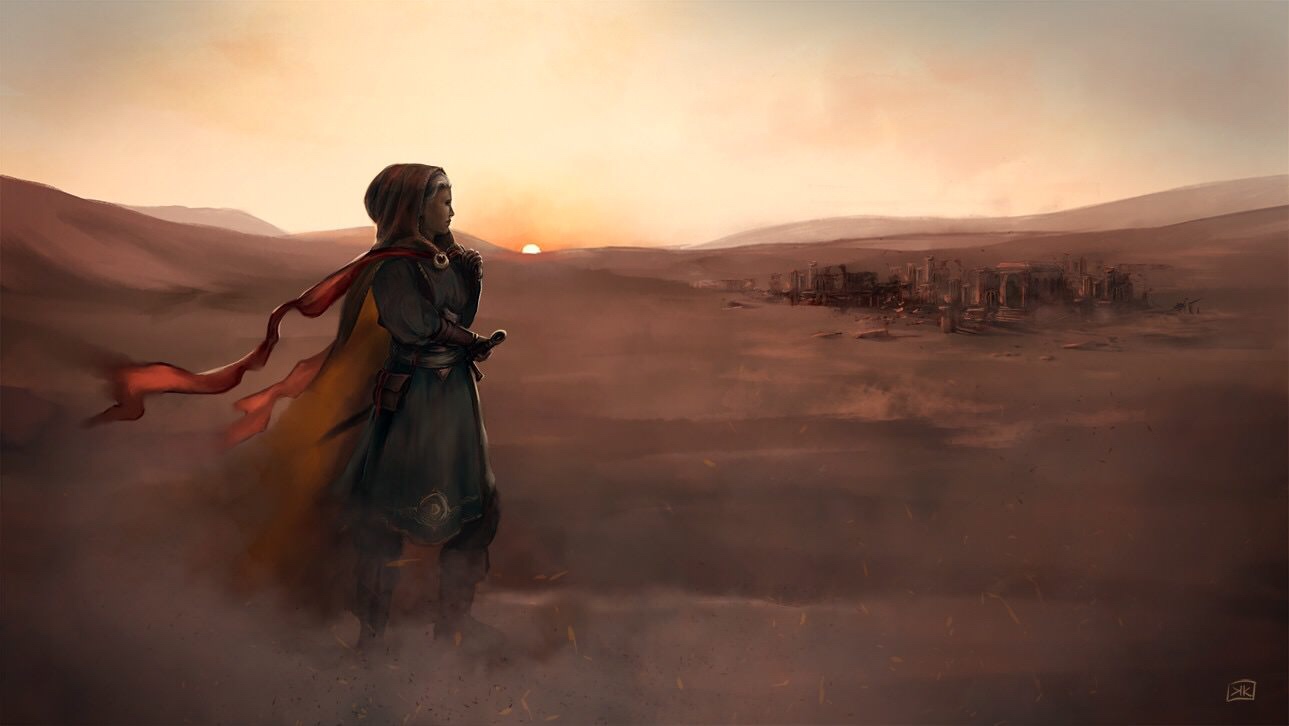 I am commonly known to outsiders as Cerastes. My true Waerdic name is longer and virtually unpronounceable to all but Ourselves, but this pronunciation is close enough.
Though I am now Mayor of this, my families town, I never saw myself as a leader of people. I just wanted to study my crafts, teach them to passers by for a bit of coin and run a stall in the markets. But I know that the unbelievable things We have seen, learned and made here in the desert, will continue to put crowns on heads and knives at throats.
Including my own perhaps.
All in the name of Balance, of course.

We are ideally located as a stopping point for those weary from travelling along the ‘Silk Road’ from the jungles and marshes of the south to the famous Last Oasis Tavern in the north. That place flashes like a opal in the dust and is a place where truth and knowledge is found and shared. Our wagons take people and goods there and, at times, messages and missives from The Two Fold Queen.

I refuse to travel further than that but our Shrub-land brothers and sisters can take those willing and financial enough even further north, to the high mountains of the bulbous-nosed Brudvir and to the dirty cave dwelling Hrothi...ugh, I can barely say the name!

And I, for one, will never be shat on by those squawking Kypiq tree pests ever again! 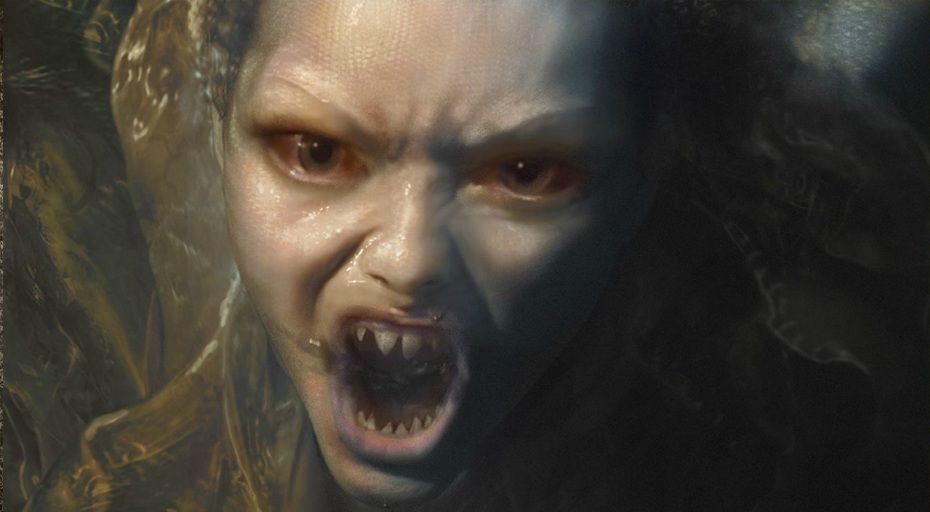 Southwest of here is the wetland of the To’Resk, a people we have not been able to influence. Their ways are not like ours but they dwell with the protection of the Prime. I may need to seek counsel to ensure they stay where they belong...or at least so they do not feel justified in killing Us when our paths cross.
Otherwise there will just be more Great Work to be done.

Even further west is the sea...pirates roam the coast and raid our border towns. This will not do. We fight back and the Great Work goes on.
Though there are rumours that a new leader of the pirates, one called Ithikari, has arisen who is enforcing a code of conduct amongst his rabble. Balance on that front may have a chance to be redeemed...but then again...they are pirates.
We will see. And act if necessary. 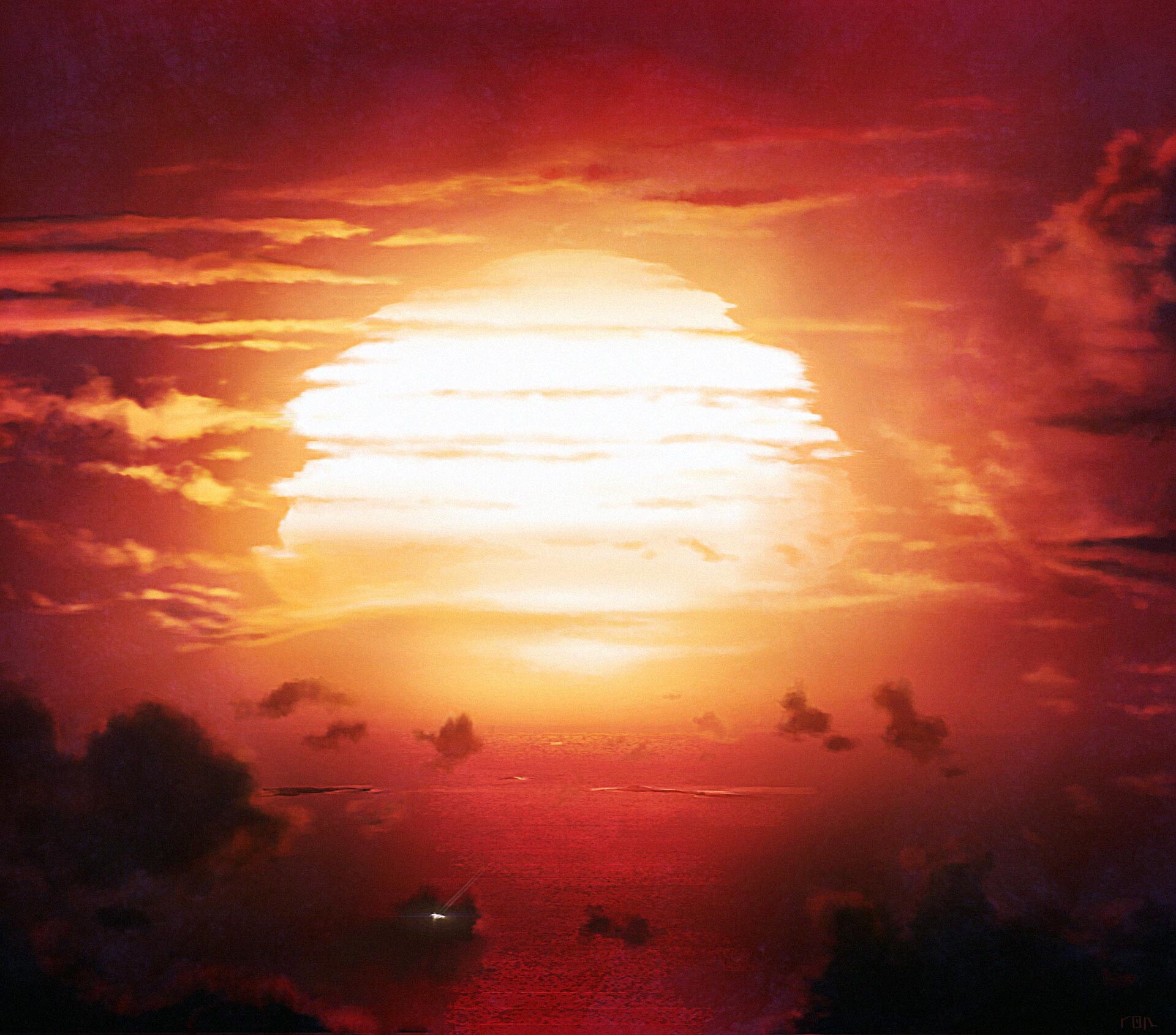 So wanderer, do you want to see and feel, maybe taste the heart that beats at the centre of the known world? Some say it’s just red dust, dry sands and cold stones.

But I assure you, the true Heart is black and white....and pure gold.

And it will NEVER be eaten! 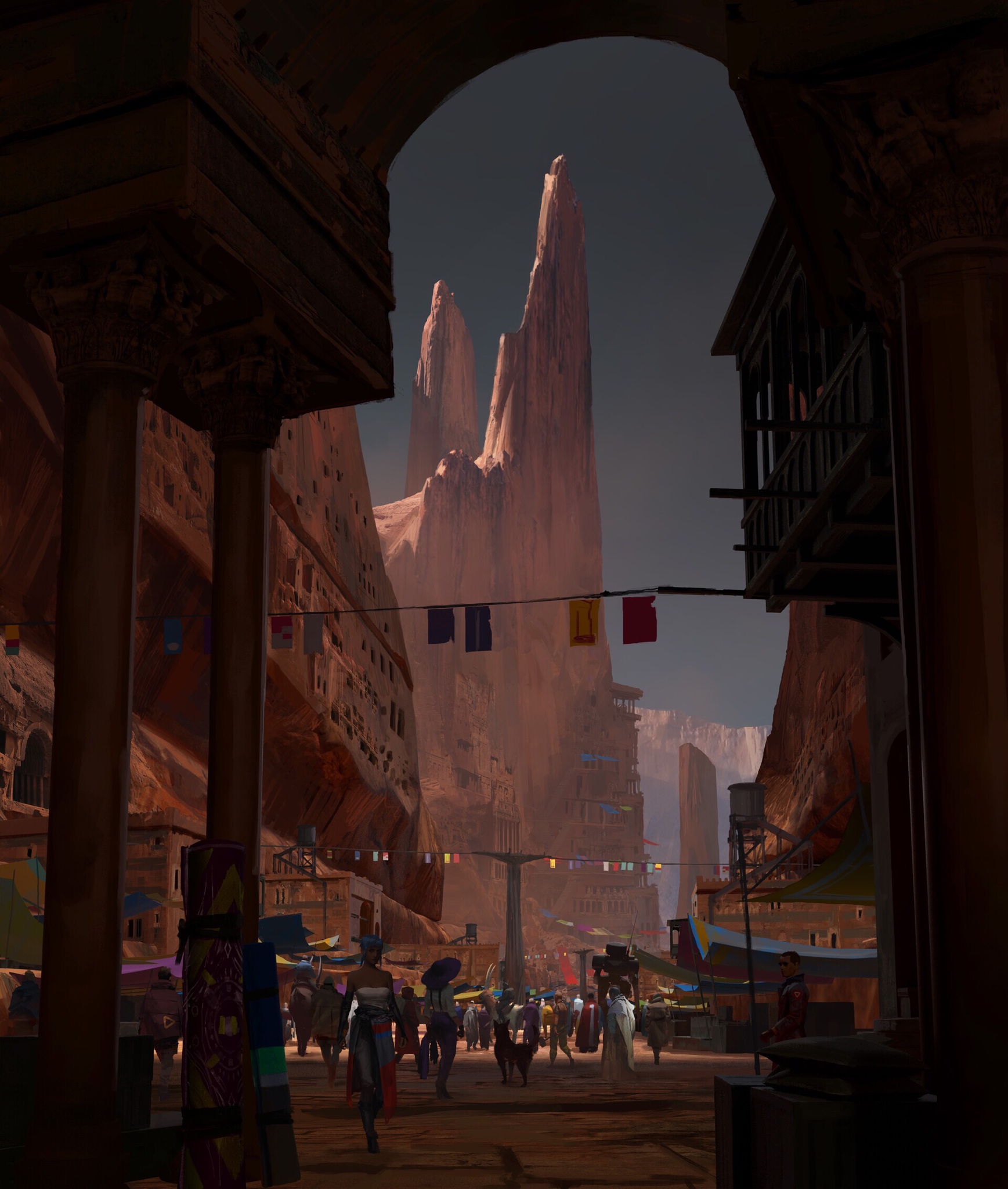 Trade, from south to north and into the interior 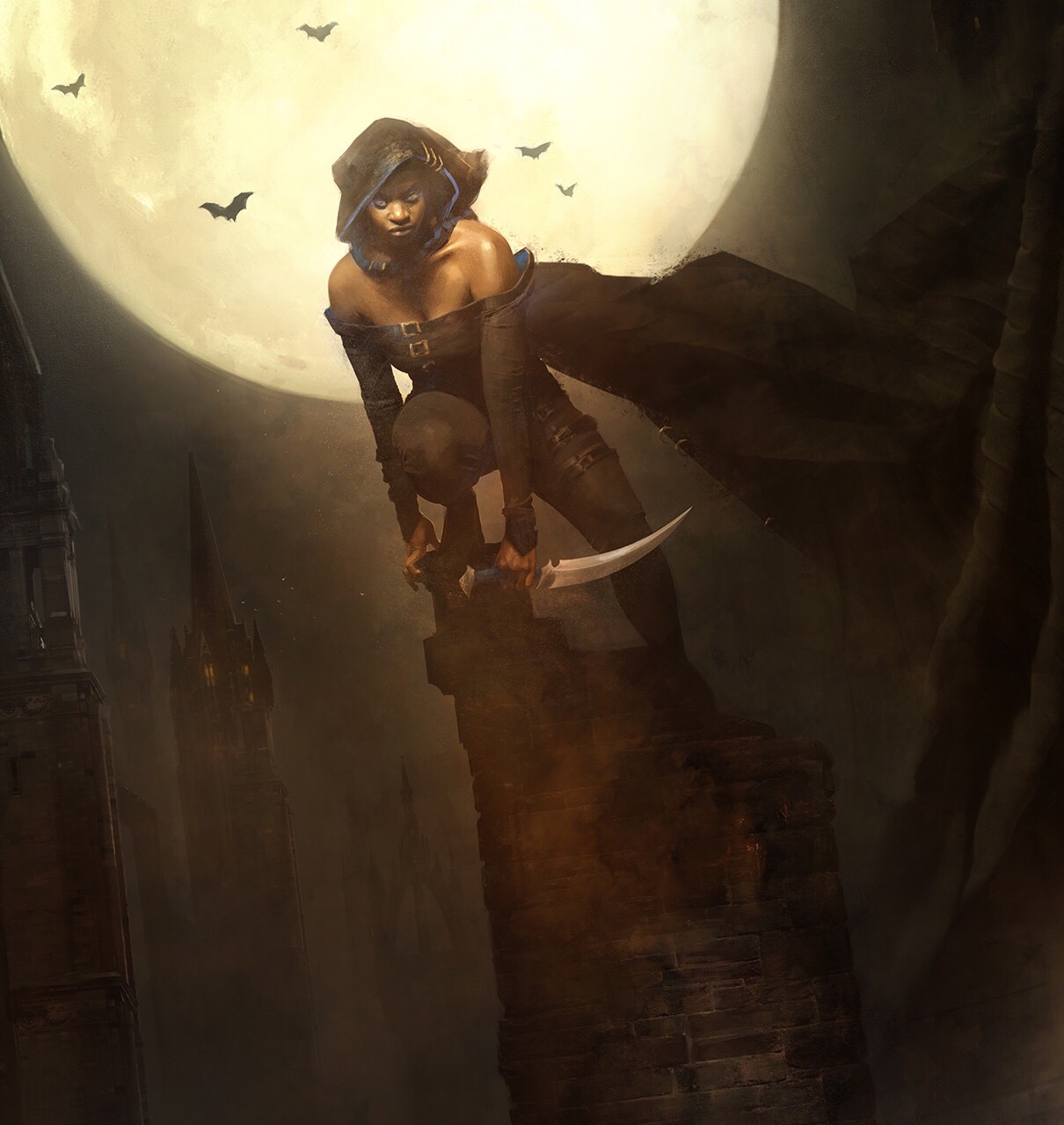 Like fire-ants that quickly gather to attack an intruder, so too are the Waerd of this town. We will not survive otherwise as there will be those who seek simply to destroy. Though they too might find a place to call home within our town, there will be limits. The Two Fold Queen is not averse to pointing the finger at Her Own.

We all have the Great Work in the back of our minds and must have no hesitation to use our skills.
Those who seek mastery in assasination will be rewarded and will find paid work protecting the town, our trade caravans and special deep-desert or cross kingdom missions. 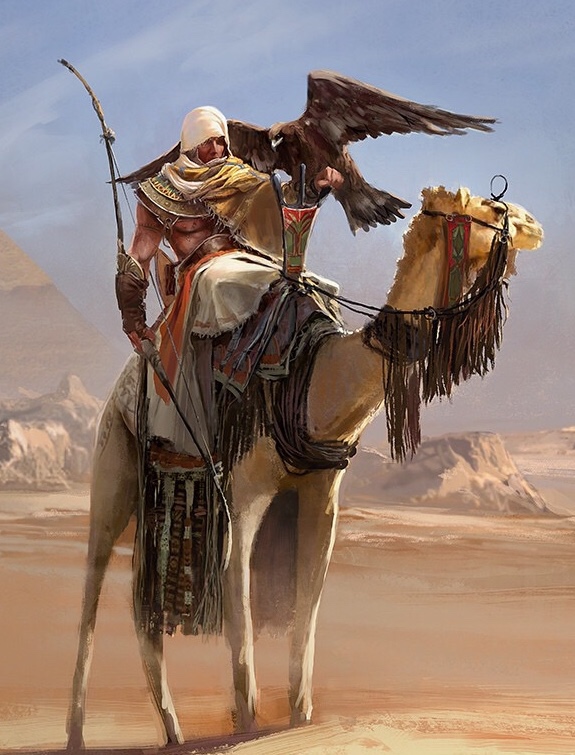 Waerd have an special aptitude and understanding with the hunting birds of prey. Falconry and, if possible, eaglery will be something I’d love to see as a town specialisation. Like the Mongolians who use train and use eagles to hunt wolves on the cold plains, so too should the Waerd.

Add a little special Dras poison to those talons and the Great Work just got a little easier!

Al’tifali and the Two Fold Queen 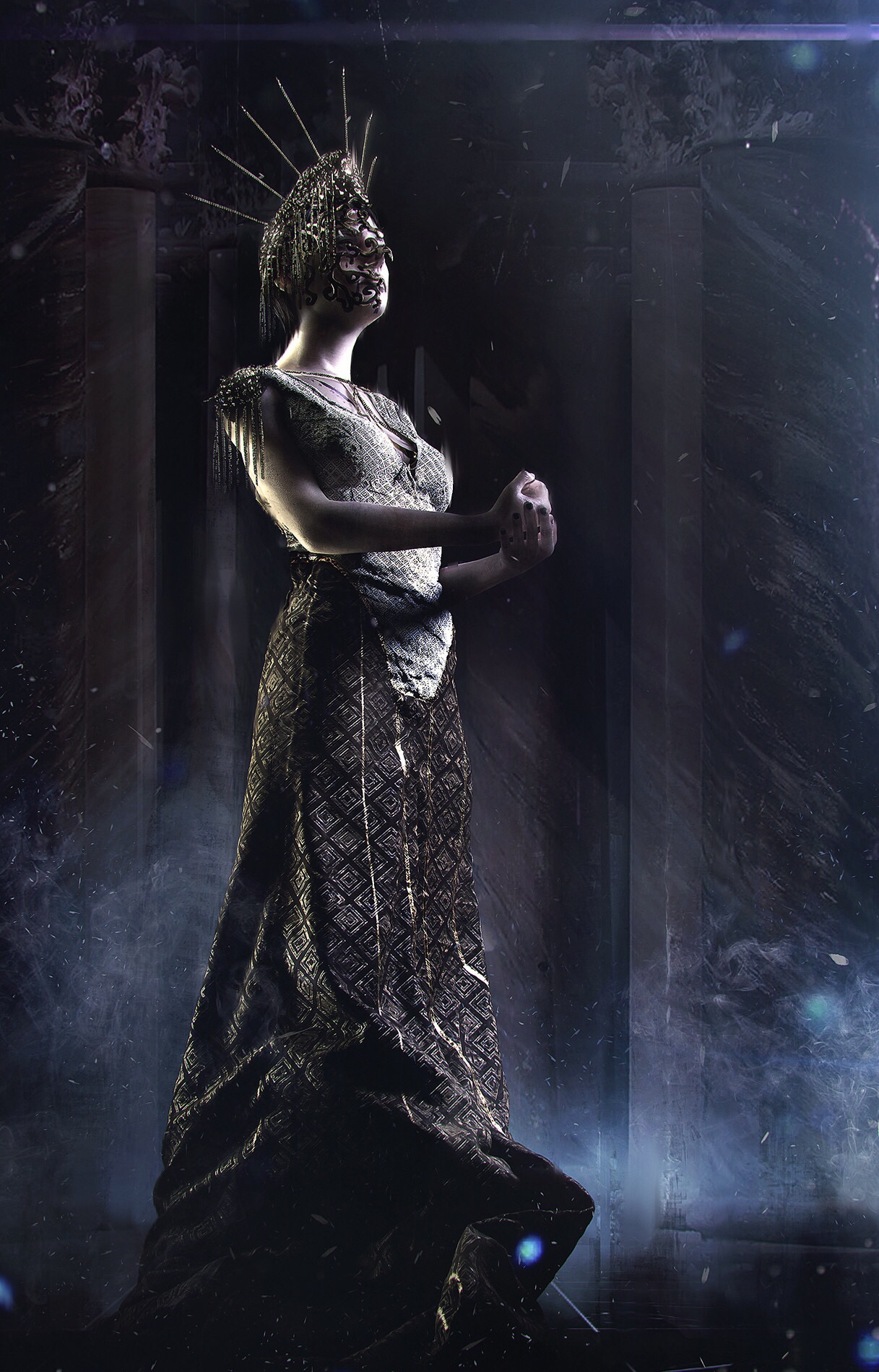 There will be a religious centre in Ichralárch. The Two Fold Queen will be honoured and listened to.

Our Dras friends from the east are always welcome to pilgrimage and rest in town so that the instructions sent via Her from are dutifully exchanged, discussed and divulged to the population as required.
Despite our differing interpretations we would be fools not to hear each other.

The town I am planning will be located in the southern Waerd duchy of Kingdom 3, ideally at the corner where the Waerd and Dras borders lie.

This town is more focussed on the Waerd tribe and biome rather than aligning just yet to a specific kingdom, duchy or county. This may make things more difficult to develop, especially as up to this point there has been little interest in Waerd on OCE.

As the town is somewhat independent for now doesn’t mean it should be completely overrun by randoms and griefers, though they will come.
I believe the settlement and its location on what I see as part of the trade spine of Map 7, would be highly beneficial to both Kingdoms 2, 3 and the Kingdom of Caprakan to protect and develop, for trade, information and the pure balance it could provide. Monarch and nobility-level support is being indicated and will continue to be pursued.

OCE needs a few Waerd players and I’d love to host a corner for those who would like to see and benefit from this alternative lifestyle.

Nice work Night, I love that you're bringing the Waerd to Caprakan!

Love the artwork in this, such great work. With a town name as such, it'll be blessed with my own presence in time to come. For the Viper knows all; sees all.

The best rooms and entertainment are always available to true Vipers! 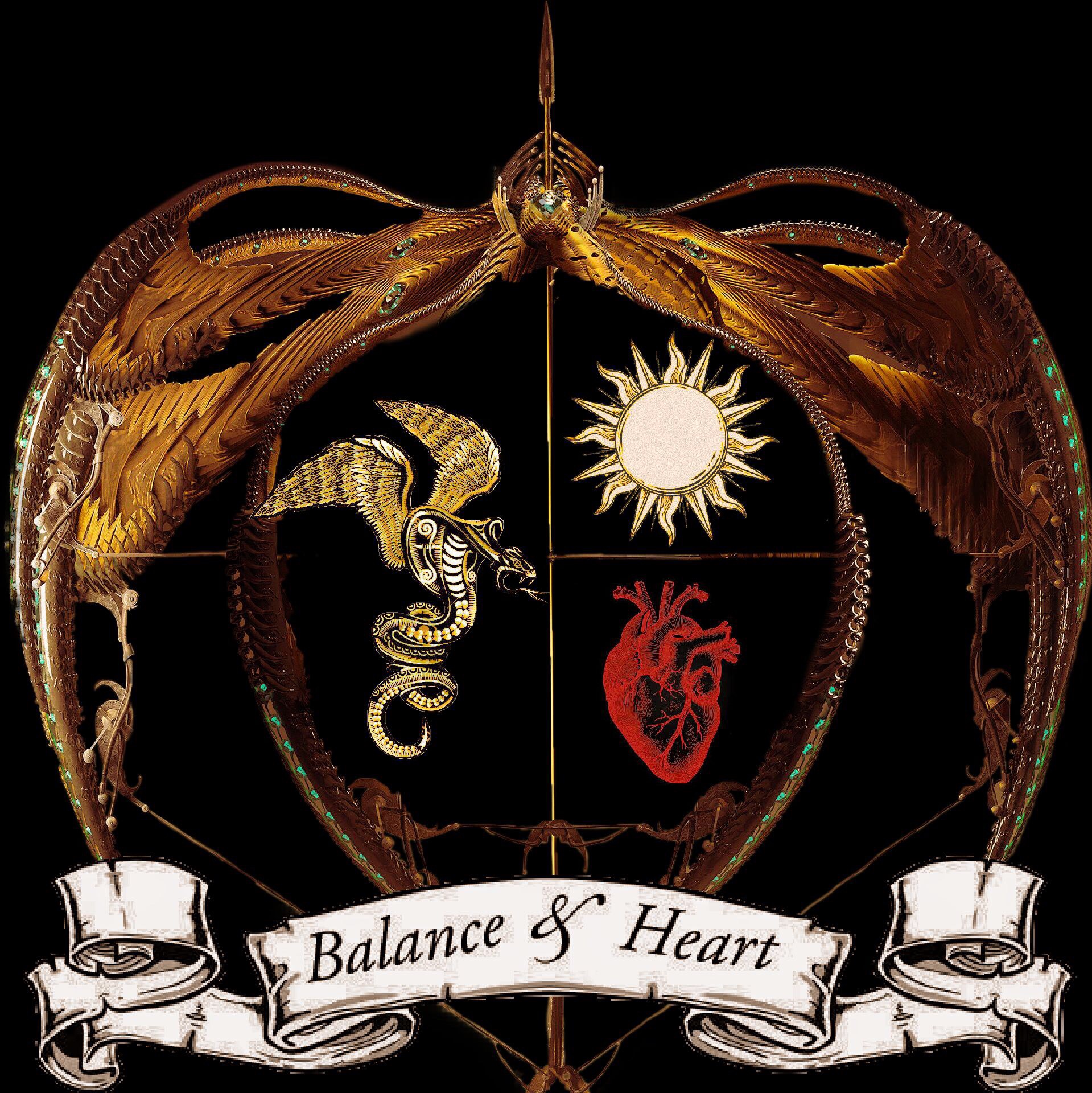