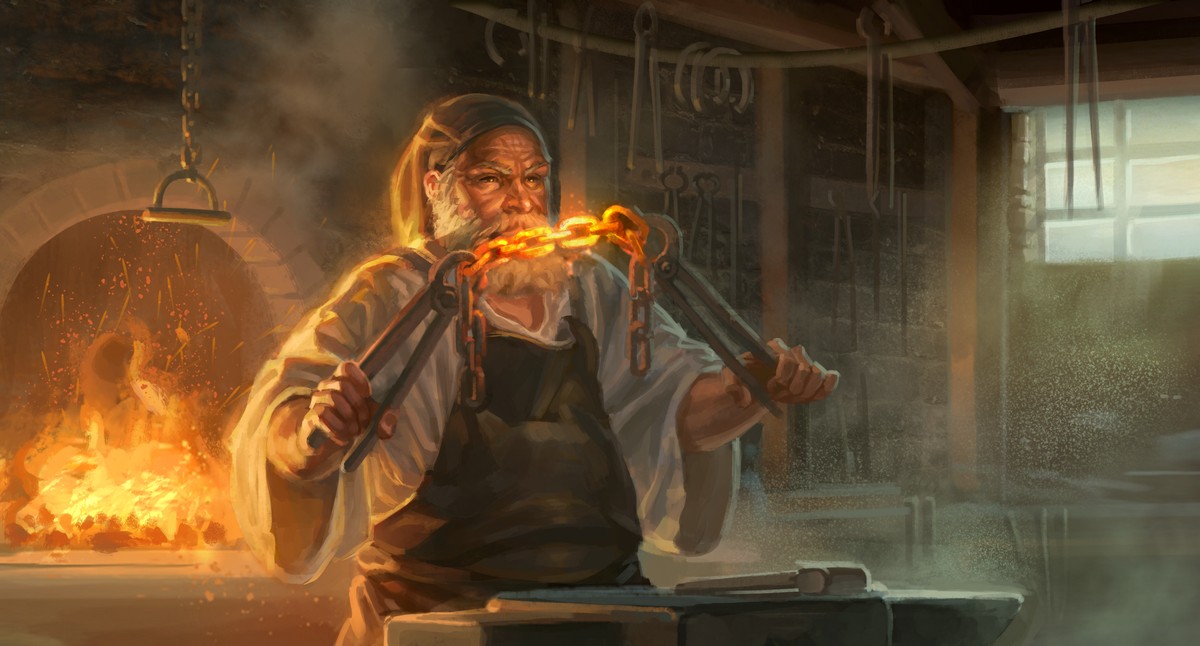 "Let the Blacksmith wear the chains he has himself made." - Decimus Magnus Ausonius

What is The Forge Bound

The Forge Bound formed within The Stormforge, a county where mining, smelting, and blacksmithing are its core focus and identity. You can read more about The Stormforge, and the duchy it resides in, The Anemoi, which resides in the Kingdom of Vornair.

The Forge Bound formed as a guild to assist the blacksmiths of The Stormforge in training, placement and (if needed) the assistance in establishing a new branch or outpost. They are an integral part of The Forge Bound Association and consists of the best smiths the association produces out of its school (Mineral Institute of Technology (M.I.T)).

History of The Forge Bound

As The Anemoi was improving its techniques to mine, smelt and smith, there became a growing need for consolidation of the many groups’ knowledge and skills in order to continue to improve the quality of their metal goods. The Count of The Stormforge decided to form The Forge Bound Association. One of its core guilds formed as The Forge Bound, where the smiths share their knowledge and skills with each other to improve the overall quality of goods produced by any member within the Forge Bound.

What the Guild Offers

Though The Forge Bound originally formed within The Stormforge, they strove to expand their influence beyond the knowledge and skills sourced from within their own county, instead reaching out to those with similar ideals in neighboring lands. Representatives were sent out to find skilled smiths with similar goals in mind, asking that they share their expertise to help improve the quality of metal goods for all involved.

Training new members who decide to reside in or near the Headquarters when they start will be one of the main purposes of the Headquarters. They will train new members in their craft as efficiently as possible with the vast knowledge in their records. As these members achieve their training goals, they could either stay at the Headquarters and practice their trade in the area, or venture out to form or join another Branch/Outpost.

The Headquarters will also work to establish strong bonds with other trade guilds in order to work in conjunction with them on cross profession projects and crafting jobs.

They will also host regular meetings with all the Branch owners as well as hosting conventions where members from all the branches of The Forge Bound are invited to travel to the headquarters. They will train with the best of their profession, trade knowledge, and trade goods/materials.

Similar to the Headquarters, Branches will work to train new members with its vast collection of training material and then let them move out to establish or join an Outpost within the county.

The Branch will establish trade routes and contacts within its county and coordinate with the Headquarters for trade between Branches of the guild (cross county) and to establish communications for outside traders and allied guilds.

Branches will be responsible with managing and disseminating the training material and info to the Outposts within their county. They will host regular meetings with county Outposts’ leaders in order to consolidate knowledge gained from the Headquarters as well as create new material from the Outposts to be shared between the Outposts and with the Headquarters.

Outposts will be formed in towns throughout a county which already has an established Branch. The Outposts will generally focus on a specific trade within the Guild. The Outposts will practice that trade and work to grow its knowledge and skills. It will, if capable, record new knowledge and skills into trade manuals they could then bring with them when meeting at the Branch to share knowledge and grow over all skills of the Branch. If unable to accurately scribe their own manuals/instructions, they will send those most knowledgeable to the meeting and the Branch would aid in recording the information.

Outposts will generally work to house and grow their members of the specific trade and aid them in accelerating their training with the assistance of the knowledge and training they have received from their Branch and indirectly from the Headquarters. They will also likely receive new members that have been trained at their county’s Branch or even a migrating Guild member who trained at the Headquarters. All such migrations will be pre-approved by both the Outpost and its corresponding Branch to make sure the new member meshed with the Outpost’s community.

There will be a council formed which includes each Branch leader of the guild. Recently formed Branches will start out attending the Council meetings, and as they develop their Branch and relationships within the guild, their opinions on matters discussed in the council will carry more weight.

The Headquarters leader will have the ultimate say on decisions made by the Council but no major decision will be made without the Council's input on the topic. The Council will meet regularly to coordinate each Branch with one another and to update each other on the current state of their Branch, its Outposts, and any other alliances/trade associations they may have formed. These meetings will also be the most opportune time to share the gained knowledge/skills of their trade between each Branch leader and the Headquarters, hopefully, sending each Branch leader back to their respective Branches with new knowledge to share amongst their Outposts and members.

Members of the Forge Bound

Fenris de Lupin’s Capital: (Blacksmithing) Count Fenris de Lupin’s county capital will not only house the Headquarters for the Forge Bound (Blacksmithing Guild), it will also house The Mineral Institute of Technology (M.I.T) which will be the educational arm of The Forge Bound Association, gathering knowledge and training members on the newest techniques within mining and smithing.

GrumpyKitten’s town/outpost: (Smelting/Blacksmithing) Based on professions/game mechanics, GrumpyKitten will most likely start up an Outpost of the Forge Bound (Blacksmithing Guild) in close proximity to Sneezewortt’s town with a focus on smelting and blacksmithing. His goal is to either start the Outpost within Sneezewortt’s town or near it, in order to have a close connection to the miners pulling the ore out of the ground so that it can be quickly processed into usable metal for his blacksmithing needs and the counties as a whole.

The Forge Bound is currently open to recruiting:

Any members that wish to join The Forge Bound, we are accepting members to join any current location, or if they are already with a group, we offer aid in developing and launching a branch or outpost of your own! Please reach out for more information.

Any other guilds/schools/associations that wish to develop trade relations Please reach out with any questions or for more information visit The Forge Bound Associations’ Discord. Thanks for considering!

Looking forward to our alliance! The Anemoi and Breed N Bleed are glad to be working with you.

The Forge Bound is proud to be a member of S.T.O.R.E