It is that most shiny of days, a day I enshrine every week as a holiday. That's right, it is SHINY TIME.

So what's on the slate this week? The last few shinies have, barring the rare diversion, been about the process of making the world, because that has been the primary preoccupation of my mind of late. However, today I got the chance to review the design guild's work, which put in me the mind to show off the world as seen from our pre-alpha client (what we've nicknamed prElyria). Unfortunately, I didn't have the free time I wanted to capture some video, so I thought I would instead take a moment to show off some set ups and locations we haven't shown off before.

So, let's start with the location that has been on my mind most often, lately, the semi-arid desert. And, actually, while we're at it, let's talk a little about one of the game's mechanics that I am most often asked about: How does tunneling work? Or more broadly, how do basements and caverns work?!

The first thing I usually mention when I'm asked, is that you can't just dig into the soil of the world and create new channels. Nor, from the world's exterior, can you simply just walk up to the side of a mesa with a pick axe and begin carving away a cavern or a cave. While Chronicles of Elyria will allow you to mine out tunnels and dig out basements, the game engine won't let you make those changes to the base exterior terrain. Out in the open, you can only build on the terrain, you can't remove or reshape the terrain itself. So how do you get to an interior space to start mining or digging?

You build an entrance: 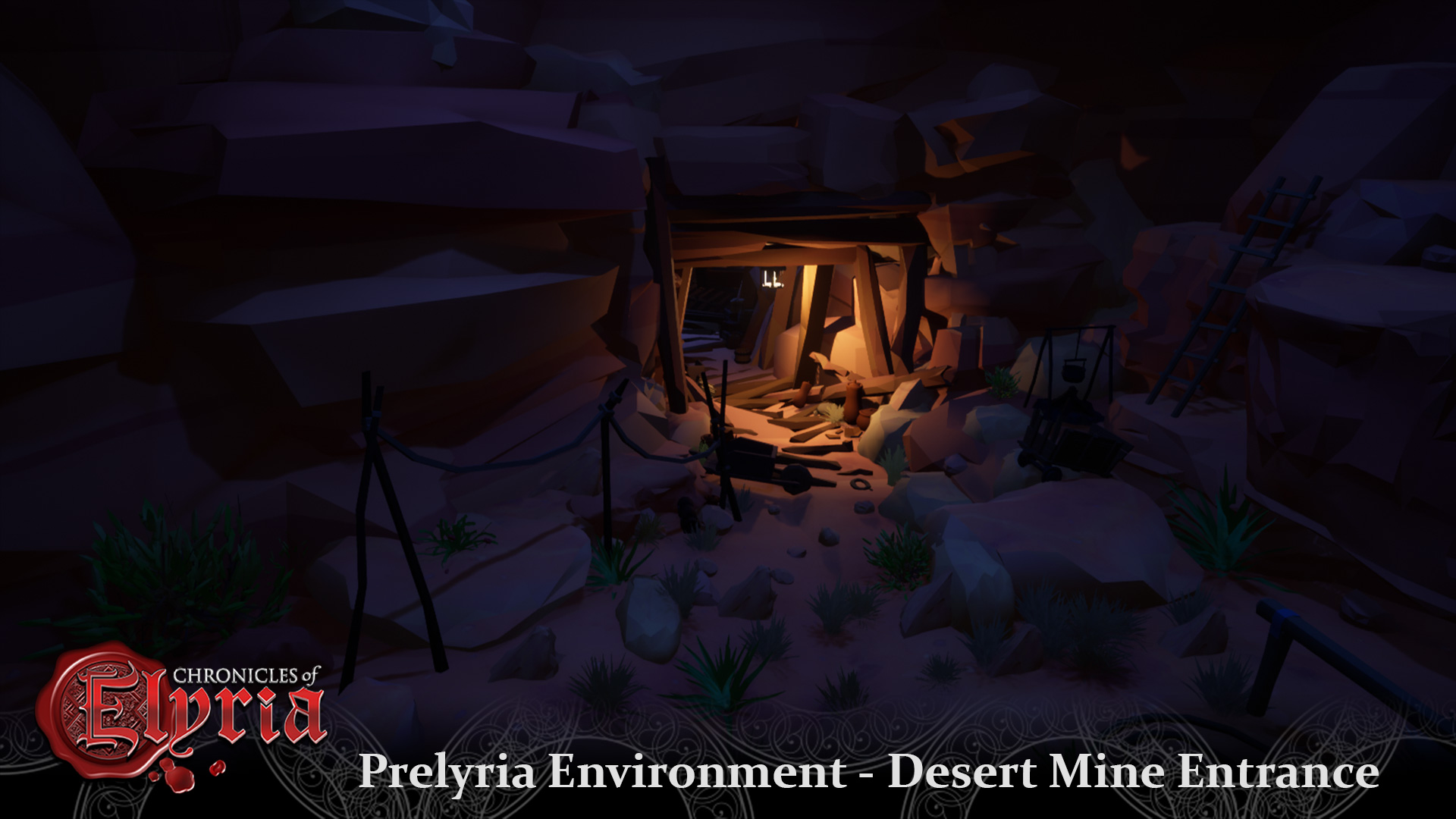 This is what we call a reference target, built out of our game assets by Heat to show us the visual fidelity we're aiming for as we implement these features, but it still illustrates how the process works: The entrance to the mine is actually something constructed on the side of the rock wall where you want to begin mining. (or in the case of a natural cavern, the cavern mouth serves the same function as the entrance)

When you build an entrance you cut a hole through the terrain and replace it with the entrance you build. Once the entrance is in place, you can step through, enter the interior of the mountain, mesa, or what-have-you, and get to work mining, carving, or otherwise constructing your interior space.

Of course, Elyria is a world that's been around for awhile, so you'll find ancient, old, or just abandoned versions of the mines, catacombs, dungeons, and caverns that pre-date the activities of players. The game systems create these based on a few rules we've laid out with the aim that, together, the collection of such spaces in the world will silently and immersively tell you some of the history of the world. You may find an old and dusty mine entrance in the desert, walk inside, and find a long neglected, but well worked, mine like so: 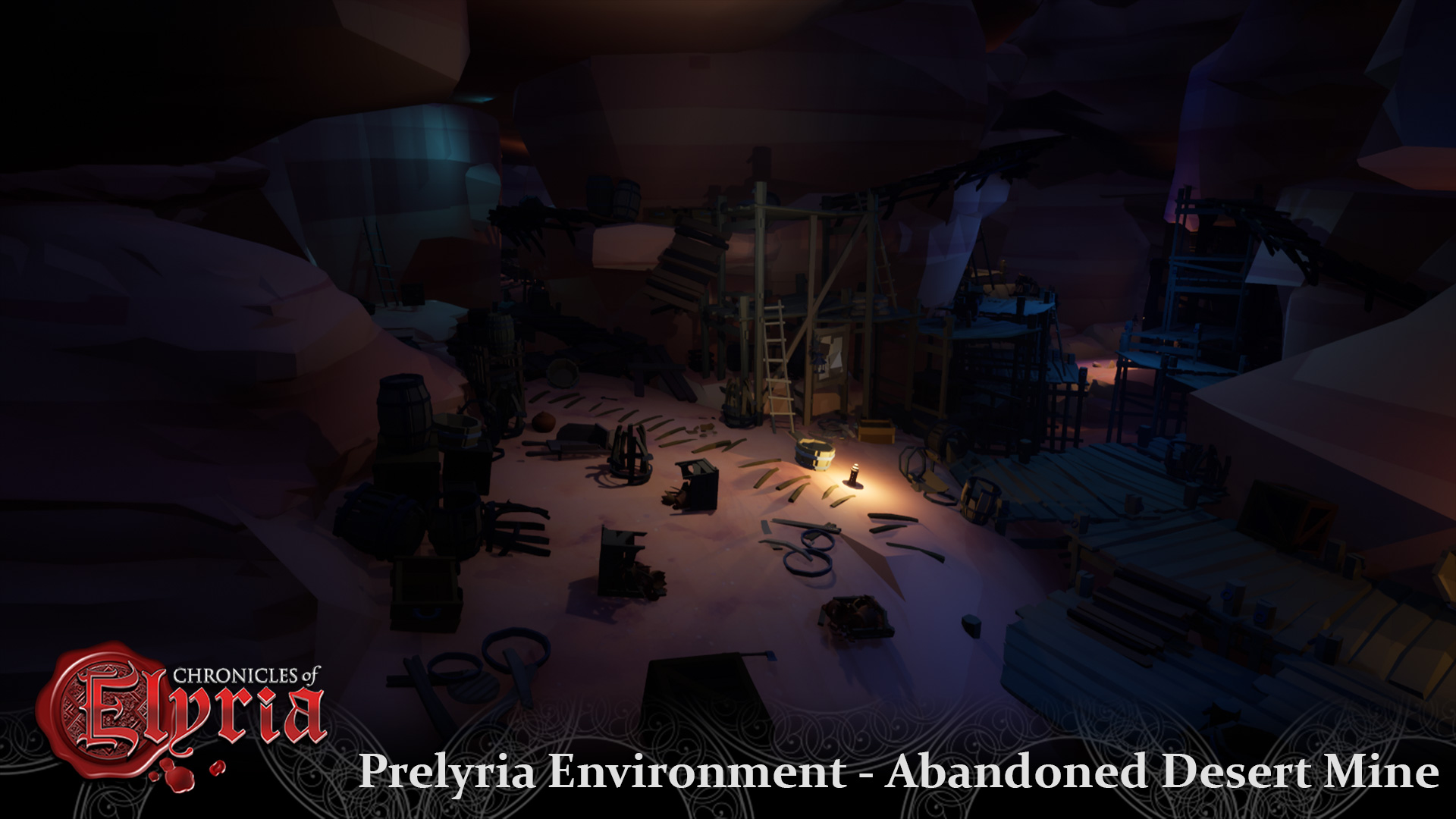 Here you see a mine where the Waerd have been working a natural cavern for awhile, having long ago transformed that natural cave into a mine, until it could yield no more useful material, at which point they moved on, leaving the bones of their old enterprise to dry in desert air, sheltered from the cycles of scorching heat and nightly cold that would have splintered and shattered what they had built.

Of course, not every interior space will take the chambers and voids left by natural processes and turn them into something like a mine. Some will be hewn straight out of the rock itself, creating the space used with each swing of the pick axe or strike of the chisel: 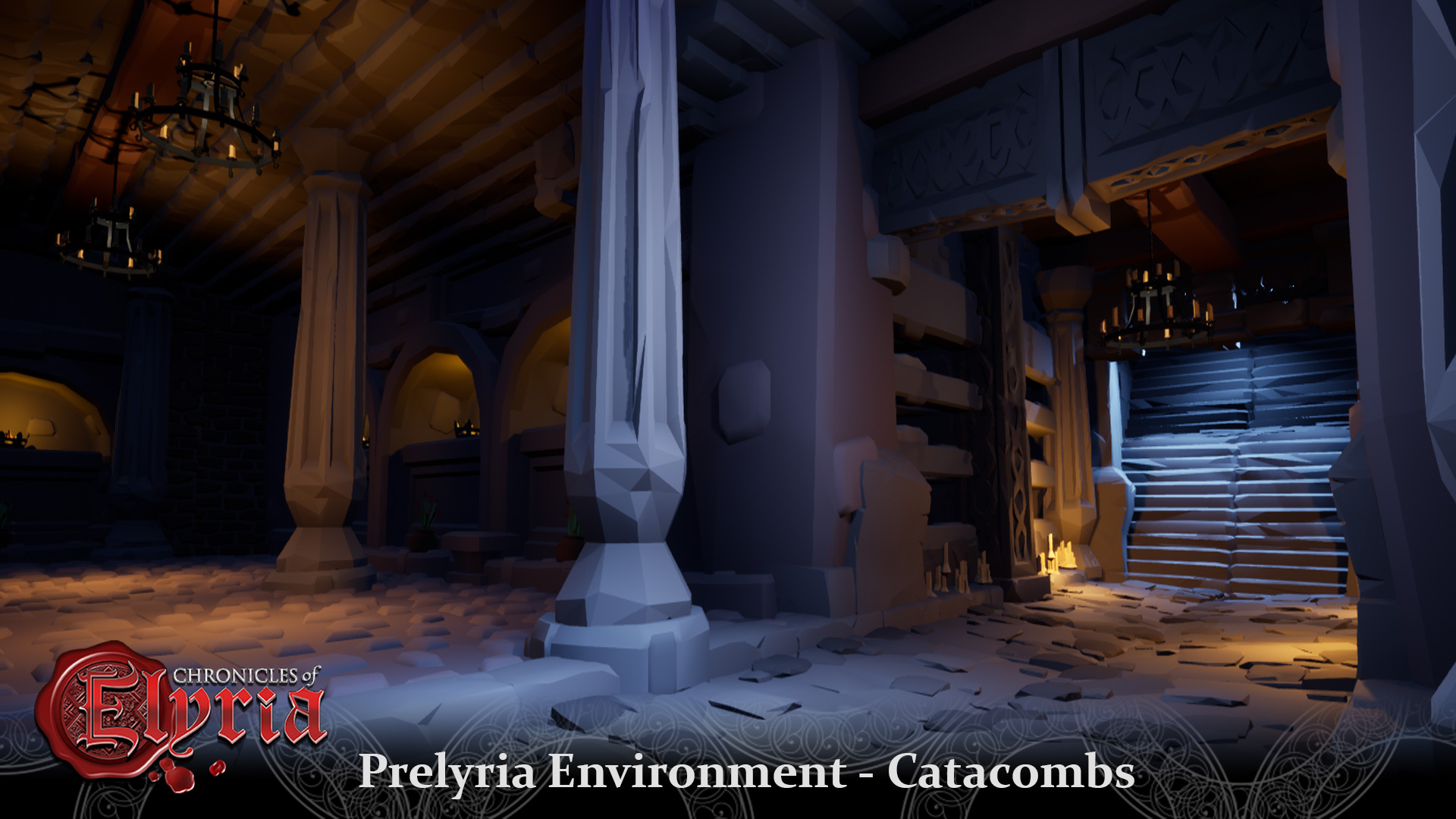 In the end though, what you do with the interior of the world is up to you, your tools, and your determination.

Looks great! Though it seems CoE will have the same mystery as most other games: who keeps all those torches and candles alight?

Owner of the Twin Accord Wholesale

I like the natural lighting! If most surface caves are like that, I think it'd be really neat. Gives a sense of the depth and proximity to the surface, maybe some pitfalls in the ground that open up into the caverns below, or something.

It's very pretty but I'm curious.. We have games where supposedly long abandoned dungeons, mines in disuse, basements with no one actively there atm, somehow have candles, lanterns, cook fires, etc lit with no one around. Compare Skyrim with Witcher3. The former has random candles everywhere, the latter has you descending into darkness. What got me thinking was the catacombs image above and the idea of untended candles burning forever (I get this is just a picture of a work in process). Without dedicated people to tend to the candles, why would they be lit up?

Will Elyria have the sort of dark places which players will have to illuminate on their own? I hope so. :)

Heh! I totally thought "They're gonna ask about the lights" when I was saving out those images. I knew I should have mentioned: Heat put those there so we could actually see the spaces in a cool dramatic ways. But no: when you see them in-game they're gonna be dark as death, maybe even as dark as the coffee I drink first thing in the morning. ;) So does this mean that subterranean spaces are instanced and zoned into via the entrance? Or will they also be 'open-world' and the entrance is both the entrance as well as the game mechanics means to say I can now tunnel here. For example an Entrance will typically consist of an opening and 10 steps w/ a landing, but once constructed is open world and traversable by anyone unless physically blocked somehow (door, etc)

As a follow up question is it a possibility to build a surface entrance off of someone's property but then tunnel into their basement as long as they don't notice, or will this be a case (using Conan as an example) where you simply hit a red 'barrier' once you reach their property line where it says "construction not allowed"?

Also, thanks for sharing :) WTB underground lake in cavern under mountains in K1 on OCE ... for ummmm... reasons! :)

But yes, I really hope there are "big enough for a dragon to fly through" entrances, as well as "ridiculously over-engineered Hrothi Gates with silver inlay" entrances. I do wonder though, are we going to use mines for quarrying too? Or does quarrying happen on surface while we build the so called "quarries" on exterior terrain?

Another question though, is it impossible to build an entrance from the interior of a cavern, IE digging out a tunnel? Or instead an entrance must be built somewhere on the surface else, and when both side dig to a common spot... it becomes a tunnel?

So does this mean that subterranean spaces are instanced and zoned into via the entrance? Or will they also be 'open-world' and the entrance is both the entrance as well as the game mechanics means to say I can now tunnel here. For example an Entrance will typically consist of an opening and 10 steps w/ a landing, but once constructed is open world and traversable by anyone unless physically blocked somehow (door, etc)

The latter - they are open world spaces, with the same access right restrictions as building on the surface, which plays into your next question:

As a follow up question is it a possibility to build a surface entrance off of someone's property but then tunnel into their basement as long as they don't notice, or will this be a case (using Conan as an example) where you simply hit a red 'barrier' once you reach their property line where it says "construction not allowed"?

This is an unresolved question. There shouldn't be anything that stops you from digging someplace you have rights to dig and then digging up to the ends of the space where your rights exist regardless, but we haven't decided yet if we will artificially stop you from tunneling into space that belongs to someone else, or instead leave your ability to do so up to the materials used by the space in the other person's land. E.g. if I build a secret underground vault to hold my treasure, it might be on me to ensure it's enclosed in iron and laid over with bricks and mortar so that that your ability to tunnel in is minimalized.

Candidly allowing that sort of thing is usually how we lean with stuff like this, but it has been something we've discussed from both sides of the argument repeatedly so I can't guarantee it, yet.

My anticipation only builds!!

A lot of potentials, underground Kingdom .

What kind of options will we have for the Entrances? Can they be different sizes/shapes/architectural styles/options for integrated doors?, can any of these parameters change after being built (enlarged, narrowed, redecorated)? Can they be concealed/camouflaged (like that bookshelf door we saw in a house once). Can they be collapsed/removed entirely sealing the area behind? Can an existing cave or space be punched into from the outside by appropriately placed entrances, how about creating an entrance from the inside of the mountain?

Will mines, tunnels, and the like be purchasable like property, or does whoever own the land automatically own everything under it?