Luna’s Rest is what some would consider, a fledgling village. Young, but vibrant. Quiet, yet full of life. The village’s birth was one out of necessity, before it became a settlement of any kind, Luna’s Rest was a group of lumber-camps who saw profit in the groves of trees in Siren’s Shore. They would set up temporary camps to ply their craft, and sell materials to the local settlements and shipbuilders in the county. Their tents, tools, and families would move for many years until the Moongrove was discovered, a large grove of high quality lumber; too vast for the small camps to harvest efficiently, and too high quality to clear cut. The families came together, settled their differences (at least most of them) and agreed to work together and build something greater. The Grove needed a settlement that would maintain it, thus Luna’s Rest was born. A village of folk who want a calm and quiet life, away from the seas that have taken many of their brethren but close enough to still be useful to shipbuilders, carpenters, and others who seek lumber and other goods.

Founding families make up the Elder Council, one member from each family becomes an adviser, and individuals most suited to take the position of Mayor if the time came for it. With a maximum limit of 4 founding families plus the founder - each family is expected to contribute a unique aspect to the town to help it flourish and grow. If there are less council members, there should be a minimum of 3 total (including the village founder) in order to break any votes brought to the council. Example: Built a sawmill and established a local carpentry shop, start the village’s first general store, join the Moongrove Institute and contribute to its growth.

Duties of the Elder Council

Decision Making: Aid in the growth of the village, whether that is agreement on road connection or voting on building prioritization. The council has lead vote on village growth, in the event of a tied vote the founder will break the tie with their vote.

Voting: In addition to voting on the growth of the village, the Town Council also votes among them as to who receives the distinction of Deputy Mayor if the time came for it. In the event of a tied vote the presiding mayor/mayoress will break the tie with their vote.

Deputy Mayor: At times the Mayor/Mayoress will not be available and will require their Deputy Mayor to step in to represent them. This is a character-lifetime position and the responsibility is transferred to a new council member once their soul takes its final walk.

Electing new Town Council Representatives: Membership to the Council is one lifetime - the founding family must choose a new representative once their current representative departs. If none in the family are left or willing to represent the family, then the Founding Family loses their position and the Council must elect a new family from those in Luna’s Rest.

Direct Messages to Hellmoon on COE Forums
Hellmoon#4053 on Discord 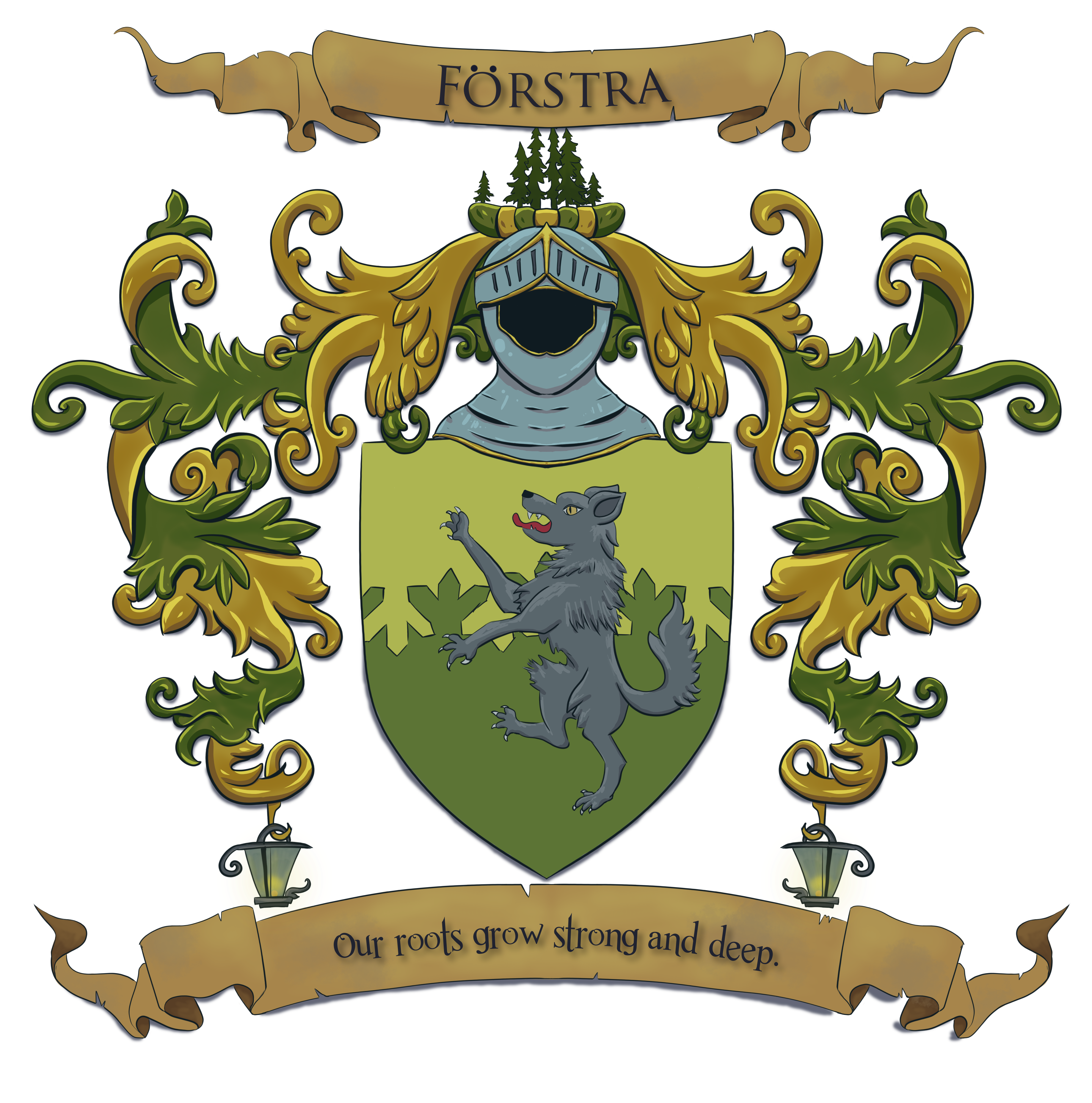 The Förstra family is a proud and loyal family, one that sets their roots deep into the earth braced to weather any storm. Their name originates from their relationship to the earth, and its many gifts, through arboriculture, agriculture, and architecture. It is believed that the family motto originated through its Proto-Neran ancestry, and relates to the fierce dedication to adherence of the Virtori. That it takes both sword and scythe, to enforce the will of the righteous and defend the virtues of Mann.

Helena Förstra “found” her way to Bastards Bay at a young age, not many folks know her true background. They know her surname is of Brudvir origin, and that she isn’t. They also know that she has a strong attachment to nature, in all of it’s beautiful forms, from the small red petals of poppies to the gigantic Iron Wood trees that barely give a tremble in high winds. All of them have purpose, all of them are worth appreciating and cultivating. So when Helena heard about the Moongrove and its cultivation project, she was on the first wagon out to what would soon be known as Luna’s Rest. From there, she made many societal connections to those around her and, many would argue, that she fueled the growth of what was a community of camps into a fully functional settlement.

Helena Förstra, seeks to raise a large family in order to spread her lineage and further the health and prosperity of the Förstra name. However, she has decided to pause any search in a family alliance via suitor until the right time. As such, if you desire the Förstra name and would like to take root in Luna’s Rest - Helena should be contacted for further details.

Family Alliance, through marriage: Vacant, not currently looking for suitors

Commitment to one of the following professions: Any type of agricultural or arboriculture-related professions (farmer, rancher, logger, herbalist), or professions relating to the process or sale of agricultural products (including, but not limited to, Cooking, Carpentry, Fletching, Woodworking, Baking, and Brewing). Exceptions are possible.

Societal Status: Must be a sanctioned landowner (Gentry or above) - as the Förstras tend to root themselves in one place, many Fosters don’t find themselves away from home for a long time but it has been known to happen (meaning exceptions apply for exploring or adventuring types).

The Moongrove Institute of Architecture & Art (MIAA) will be primarily focused on the pursuit of knowledge in fields like Architecture, Sculpting, Painting, and other physical art forms in Elyria. That being said, the school will consider most any art-related field if an instructor would like to introduce a new class dedicated to a specific field (music, specific crafts, and writing may all be considered).

The Founding of MIAA

Located within Siren’s Shore County, MIAA has been founded to provide services and education to its surrounding towns, settlements, and cities. It’s expected that while it may have humble beginnings, the school will grow to serve many prospective Elyrians in their quest to develop and grow their knowledge.

Needs of the Institute:

Direct Messages to Hellmoon on COE Forums
Hellmoon#4053 on Discord

Updated to reflect my D&SS pick, we're on the map!