Adventure Intro: From Pre to Alpha

It's been near two fortnights since the conclusion of Release 0.3.0 and the team is heads-down on the pivotal work of what will no doubt be remembered as one of the two most critical releases in the development of CoE: Release 0.4.0.

While Release 0.3.0 was largely about the stability and integrity of our platform, in-game communication, performance, and readying the world for the world-building process, Release 0.4.0 is all about the game. While we will no-doubt revisit our platform technology at some point in the future, our focus for Release 0.4.0 is all about breadth of functionality, with very little attention being spent on the engine.

The goal of Release 0.3.0 was to have the platform at a point where we could get as many as 2,500 people walking around in the world, checking their inventory, equipment, and character sheets, and interacting with one another through communication. Mission accomplished; but walking and talking does not a game make!

Release 0.4.0 is where we take the prototypes we've been working on over the last couple of years and begin integrating them into the code-base so that we have the game-play features of Alpha 1 (in some minimally viable way) all in one place. By the time we exit 0.4.0, we will have iterated, in one way or another, on every major feature of Alpha 1. But what features are those? Let's take a look.

Development of the Alpha 1 features is divided up into an order-of-operations in roughly three categories. These are:

The first set of features are things like having the ability to walk around in the world. Being able to check your inventory and character sheet, being able to create a character, and being able to see how character creation is tied into the family and genetics system.

You'll no-doubt recognize those features as some of the main things we were working on at the end of last year and the early part of this year. Those are all components necessary for the world to exist, but contain little of the features most people think of when they think about a "game." Largely, those components are used as information that is fed into actual mechanics. If you take a look at the flowchart below, you'll see the items in the second category begin to resemble more of the "gameplay" side of things. 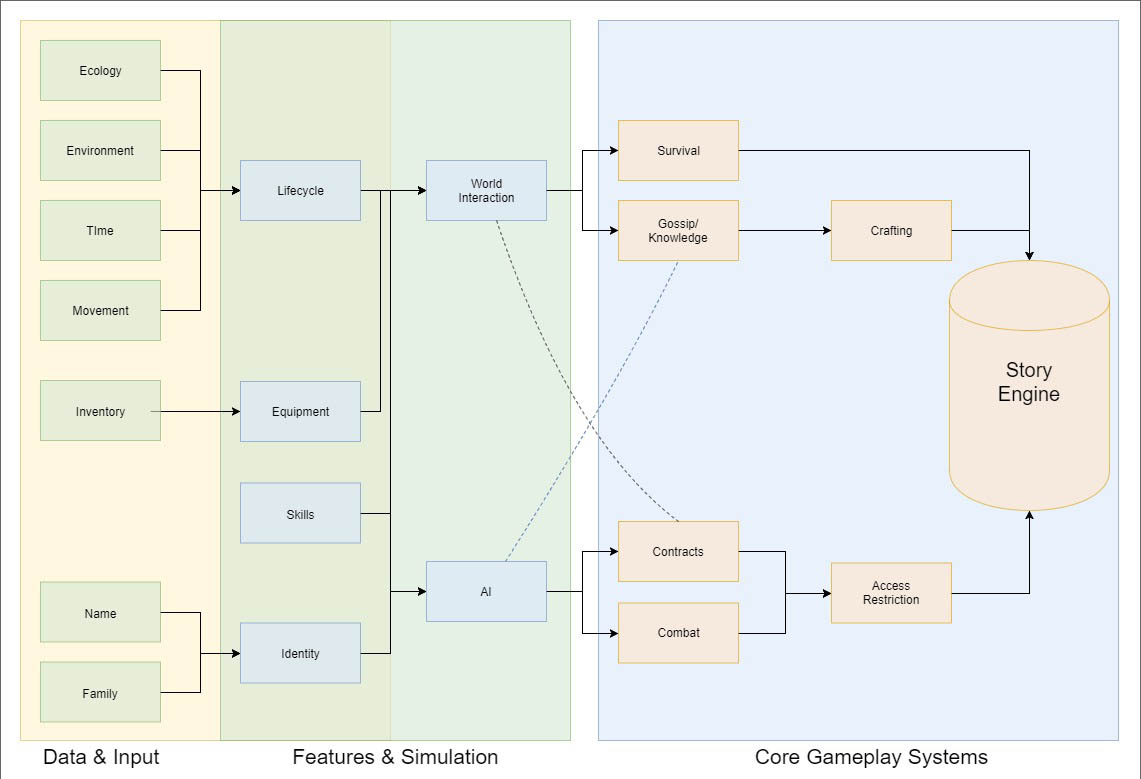 In the second category you've got things like the player lifecycle, which includes being able to be incapacitated and - you guessed it - spirit walk. At the same time, it includes skills, the identity system, world interaction, and the much desired artificial intelligence systems of both our creatures and NPCs. While we'll be paying particular attention to Skills and World Interaction in release 0.4.0, we'll be hitting all of these at some point over the next release.

Finally, if you take a look at the far right category in the flowchart, you'll see features such as survival, gossip & knowledge, contracts, combat, crafting, and access restriction. These are not simple mechanics like in the second category, in that they are a combination of everything that comes before it. For readability-sake, this chart has been simplified but imagine that every box in the Core Gameplay Systems category has arrows going in and out between every other box.

As with the previous, we'll be spending most of our time in Release 0.4.0 digging into crafting, gossip and knowledge systems, and combat, but we'll be visiting all of them at some point. That should give you a high-level overview, but there's a couple we said we'd be digging into in greater depth during 0.4.0. Well, let's dig into those a bit more now, shall we?

When we first began work on Chronicles of Elyria we did so with the idea that all actions a player could take in the game would be skill based. Some of that skill would be player skill, and some of it would be character skill. As a result, there was a time when CoE had well over 150 unique skills, divided into various different categories spread across a giant skill tree.

As time went on, we realized that there were many actions a player could take which didn't necessarily require character skill. Character attributes would very likely be sufficient for such actions, especially when combined with character knowledge. Of course, we still wanted there to be player skill involved, but the simple act of reducing the number of actions that were tied to character skill dramatically simplified and streamlined the design of the game. This lead to what we referred to as the Skill Flower, as seen on the left-hand side of the following comparison chart. 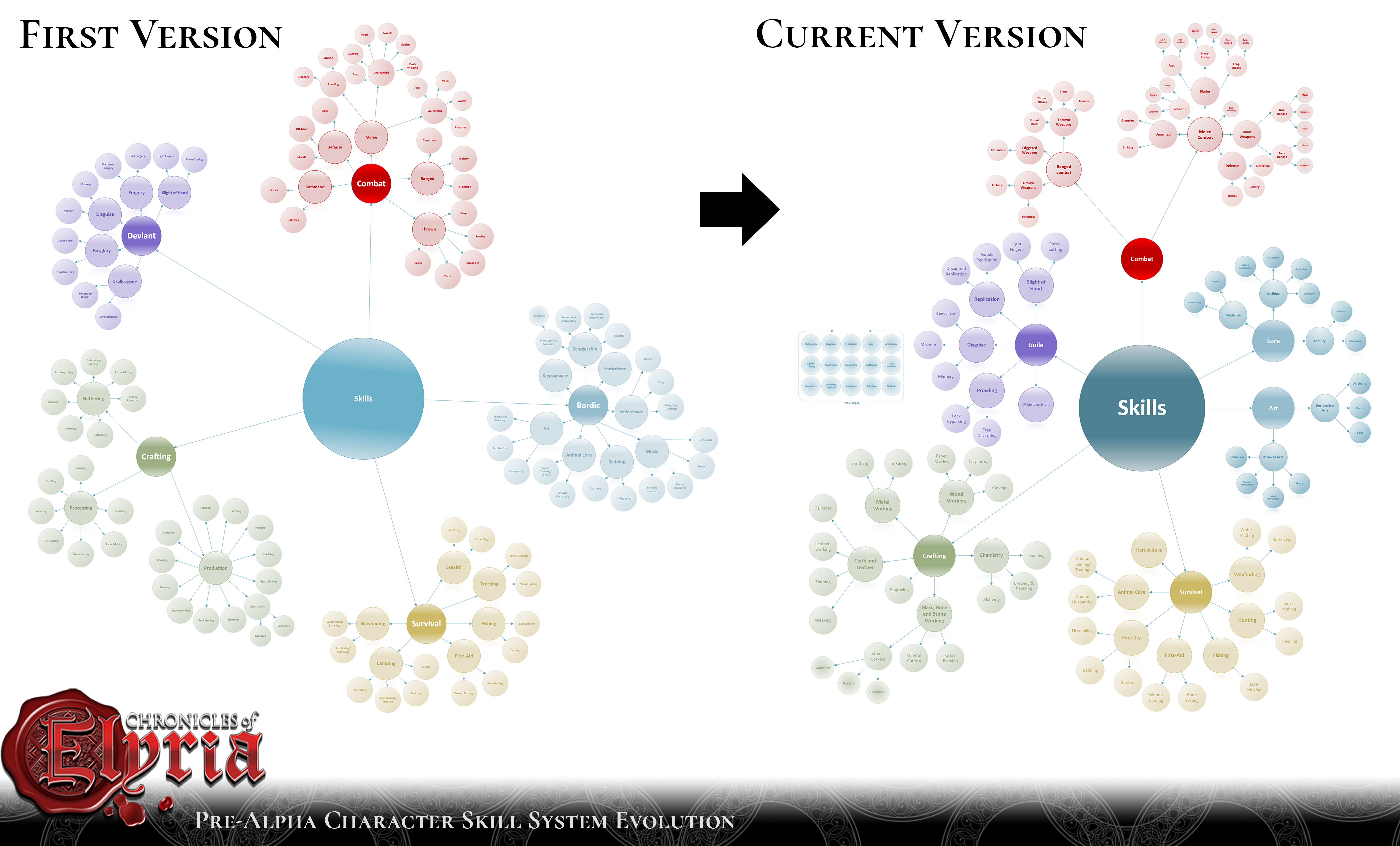 But we didn't stop there. In Release 0.4.0 we've begun work on further simplifying and refactoring the Skill Flower. If you look at the comparison you'll notice a couple key things.

While a good amount of work has already been done in this area in 0.4.0, there is more streamlining and work to be done. When 0.4.0 exits, we should have the final (Pre-Alpha) Skill System locked down. It will, of course, be iterated on when we begin playtesting, later on.

In the same vein as skills, a large amount of energy is being spent in 0.4.0 on the crafting system. This includes both its relationship to the World Interaction system as well as how tools and stations are used. And, to ensure we've got assets to work with while we experiment with the different professions, the content team is, and will continue to be, hard at work on creating assets for us to use. Here's a couple for you to take a look at. 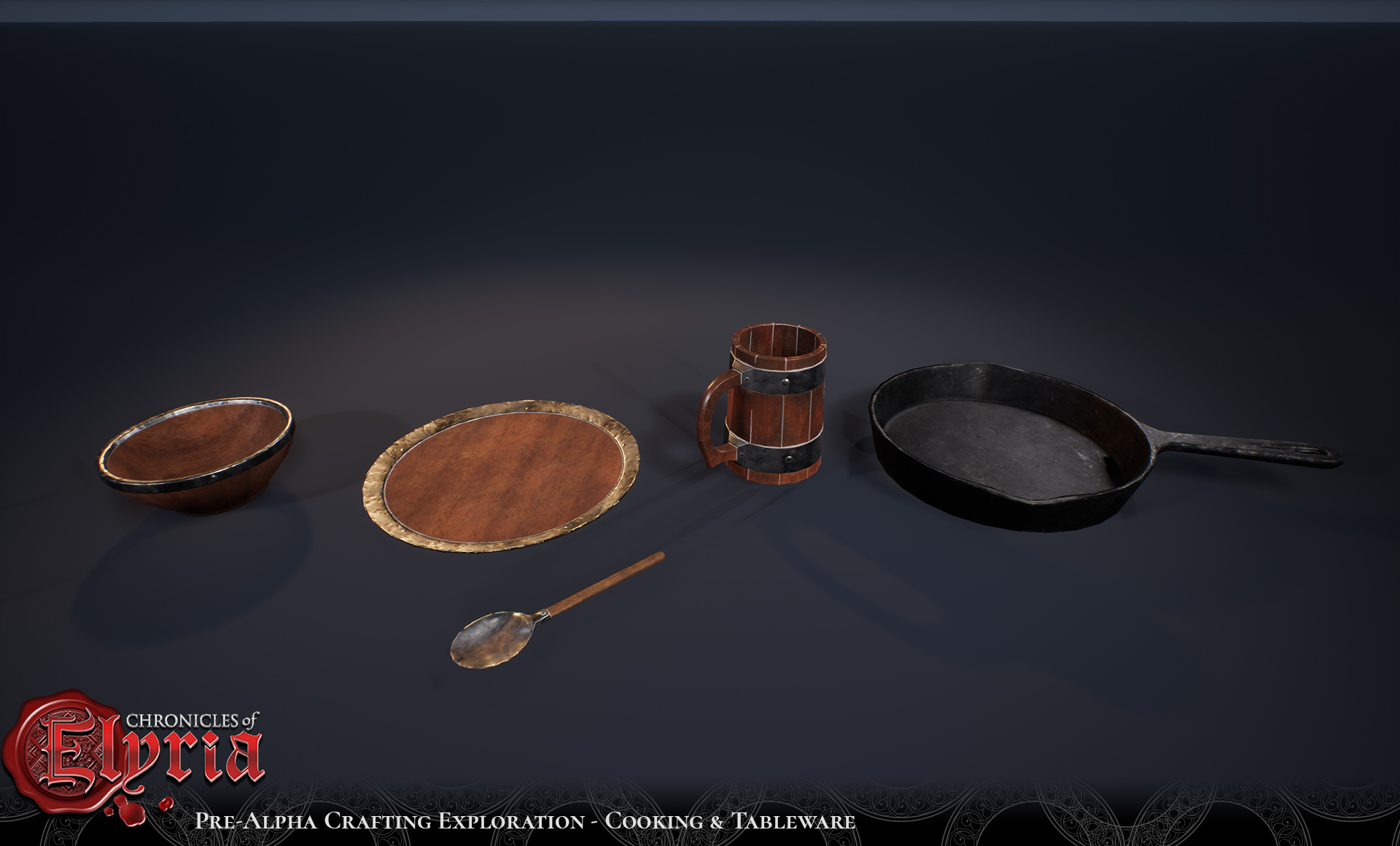 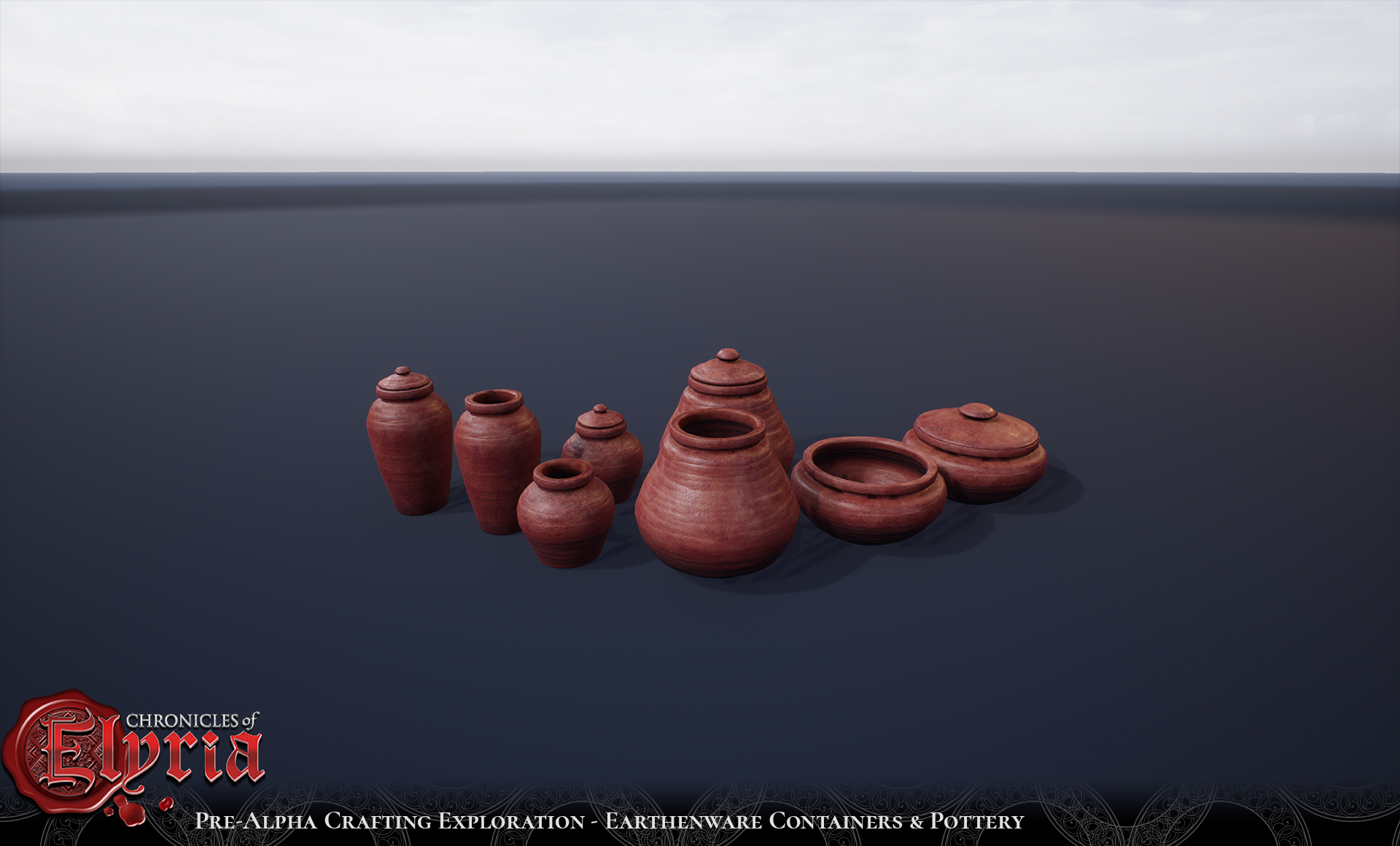 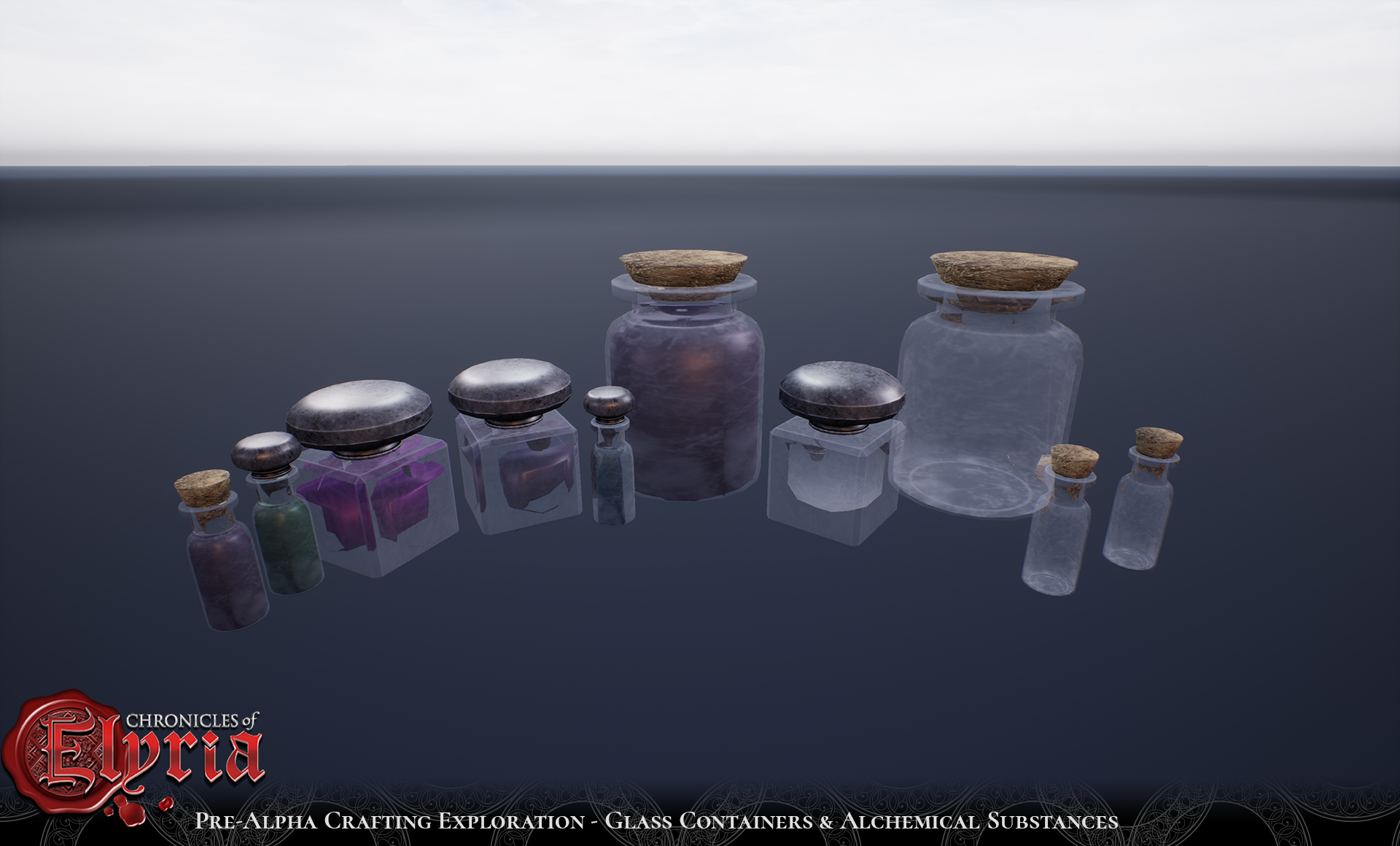 With such a heavy focus on skills, it should come as no surprise that one of the key motivators was from evaluating our combat system. There are some combat mechanics that tie in very well to a system of character skills, techniques, etc., while there are others, such as Archery, which we felt should be very focused on a player's skill and their ability to read the environment.

As a result, we're also doing iteration work on the combat system. For example, we've been tuning and balancing the different attributes associated with the combat system (along with all the other skills). By default, all skills have a combination of primary, secondary, and tertiary attributes that govern your success rate, and the quality of your success.

Here's a listing that shows the attributes as they stand for a just few of the top-level combat skills. Each leaf in the Skill Flower will have its own entry like this. 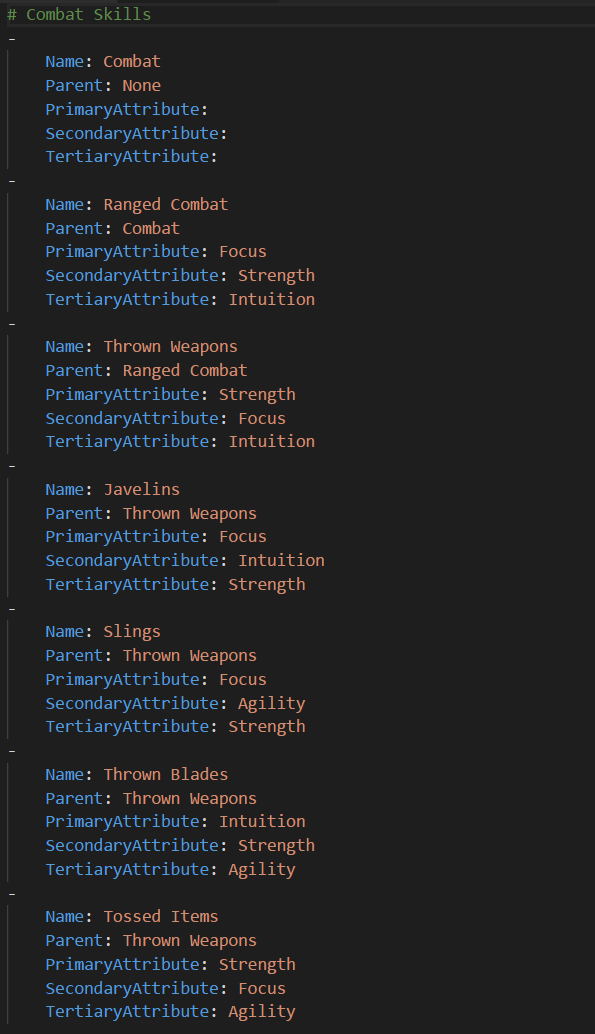 Another thing we're working on in 0.4.0 is world building. Upon the exit of 0.4.0 we want our world-building tools at a point where we can finally procedurally generate entire maps. That means we'll be ready for Map Voting! There are two parts then to the work we'll be doing in 0.4.0, the world generation itself, and then website support needed to actually perform map voting.

In addition to the varied flora in our biomes, we're modeling the unique fauna that will belong there. Some, like the foxcelot below, will have different versions depending on the biome it has adapted to. This can affect color and fur pattern, as it will with the foxcelot, but not always. Some creatures will look relatively the same from biome to biome (such as a sheep) but have different behaviors that help them survive there. 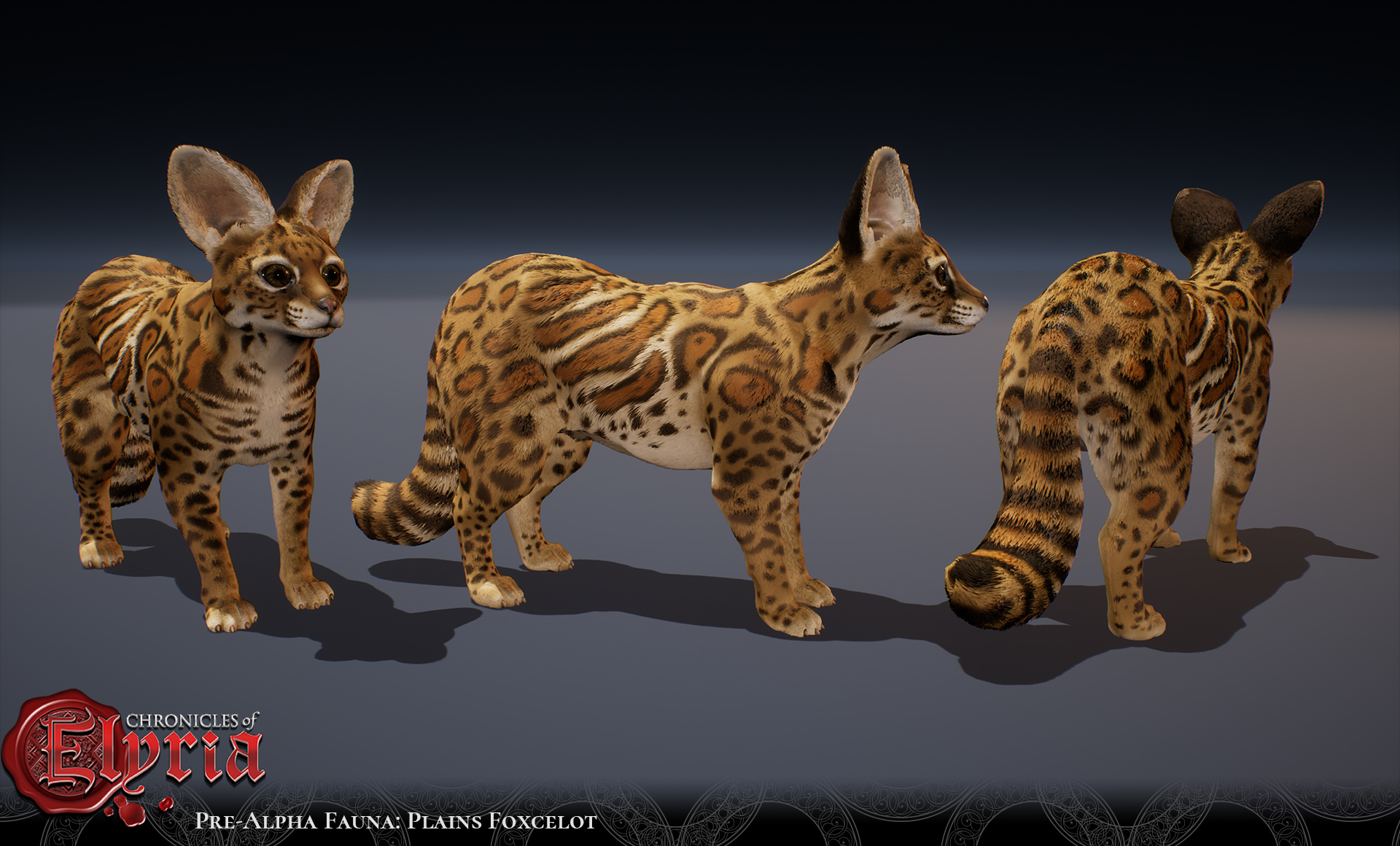 I was tempted to share some images of the Broadleaf Forest biome we've been working on, but I'll leave the honors to Raevantiel in his inaugural ChamberBot session tomorrow. One thing I can say for certain is that it's got some very broad trees.

Back at the beginning of 0.3.0 we shared these wireframes as a general guideline of how the map voting website might look. 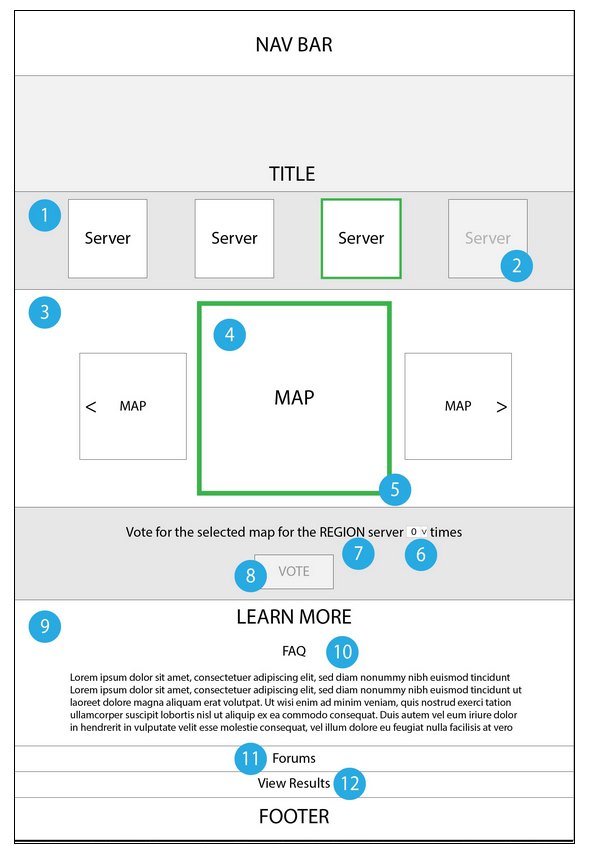 Since then, we've made further work on the map voting site, and have both completed mockups of the site, as well as begun implementation. While we're not done yet, here's a screenshot of the mockup.

And finally, 0.4.0 marks the beginning of our first major world-event. Back in November and December of last year players got a chance to participate in the Free Kingdom of Elyria event. This event was server-specific, but still provided an opportunity for the entire community to get involved with others to help shape the history on the Luna (NA-E) server.

This July/August we'll be doing an event similar in scope, but with much higher stakes. We'll be running a 6-week event where the players themselves will be dictating, through their collective actions and decisions, the historical outcome of an event from the year 229 of the 4th Age - nearly 600 years before launch.

This is no small thing. This event demonstrates, clearer than ever, our desire to allow the CoE community and players to dictate the history of Elyria prior to launch date. While the Chronicles of Elyria are vast, spanning back before recorded history, and into a future yet unknown, this will be the first time the players truly get to write their own chronicle. Imagine it as a precursor to how world events will unfold using the Story Engine. While more information will be coming soon, the players have yet to pen the unfolding events of The Searing Plague.

That's all for now folks. Release 0.4.0 is really what we at the studio have all been waiting for. It's an opportunity to bring gameplay elements into the world we've been creating. Something we can feel. Combined with more integration work in 0.5.0, these next two releases are perhaps the most vital and impactful of the entire process. We're glad you're coming along with us, and we're so very excited for you to see the outcomes of 0.4.0 and 0.5.0.

Pledged to the Continued Development of the Soulborn Engine and the Chronicling of Elyria,