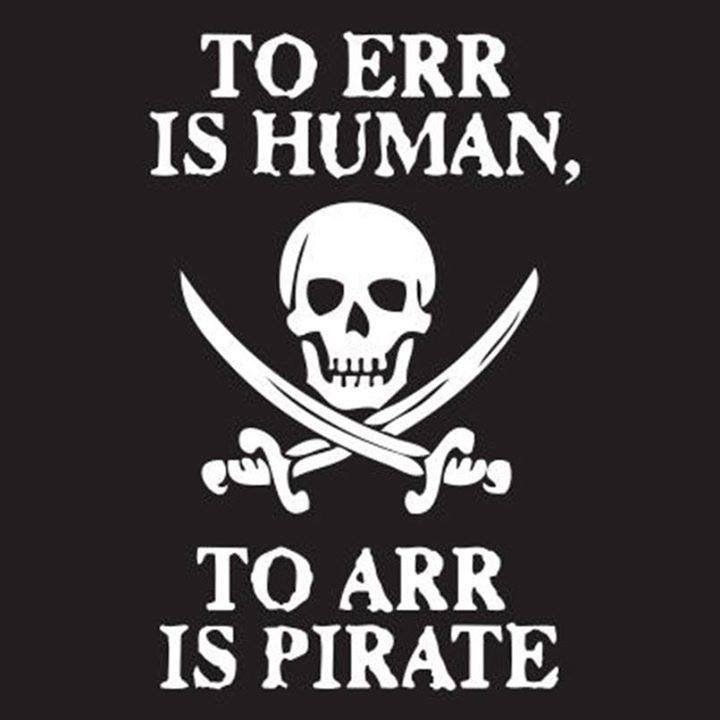 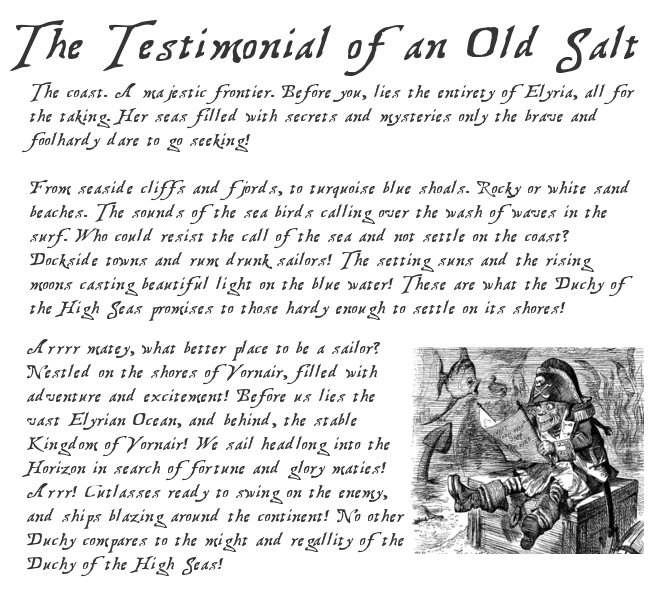 The focus of our Duchy is to provide the Kingdom of Vornair with the highest level of naval research, development, defense, and exploration. Our first goal is to gain access to the best seafaring vessels to establish our presence on the seas as well as invigorating the community of Vornair. Calling all naval researchers and shipwrights! Your skills are needed to see this process to completion.

While our focus is maritime in nature our economy must be well rounded in order to accomplish this. This will involve the efforts of those interested in the other aspects of Elyrian life. This means farmers, crafters of all types, and well established guilds to provide a prosperous economy that can help feed the naval research and development efforts.

In the history of our world maritime trade was an enormous turning point and allowed many cultures that previously had no contact with each other to do so. This allowed advances in research and cultural development that never would of happened otherwise. A vast majority of trade between Vornair and the other kingdoms will be from sea trading. Promoting trade with our allies will strengthen the core of our agenda. The strength of the High Seas will direct us to new lands abroad. We welcome all that are willing to trade on the open waters. 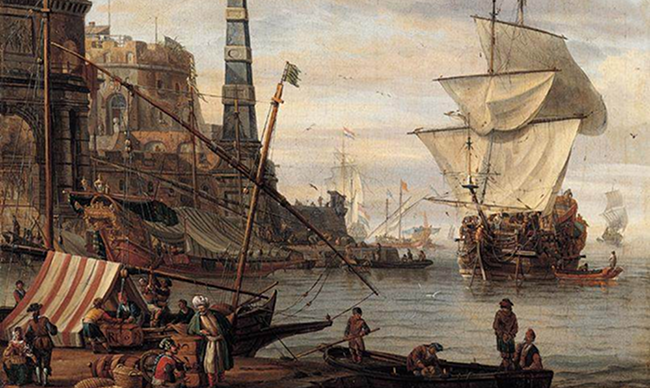 Beyond the shores of our native continent lies the potential of new lands and tribes that are waiting to be discovered. This won’t be accomplished by those who are satisfied by keeping the hearth warm. Instead, those daring fools who are willing to risk life and limb will be the ones who place that flag upon uncharted soil. With exploration comes the bounty of new technology, resources, and land. These keen eyes, ears, and blades may very well decide victory or defeat at the hands of those that would lay us low. Do you have the guts to be one of these foolhardy adventurers?

Once naval research is established and our goal of obtaining ocean faring ships has been met, the next step is to form the Draugr Fleet. The fleet will protect our shoreline, our seafaring trade routes, and maintain a presence on the open waters. Any that attempt to hinder our efforts at sea will feel the full force of the Draugr Fleet.

The duchy will be run by the Duke and a collection of councils focused on economy, defense and exploration.

The Counts will be allowed to run their counties however they choose as long as the very small number of duchy laws are upheld. The Duke will only become involved when those actions affect the entire duchy and its citizens.

Barons will have a specific force size they will be required to maintain. They are free to train and take jobs from the county whenever there is a lack of conflict. All members of the military are encouraged to adventure and explore to gather knowledge and skills that will help them when there is a call to arms.

The basic framework of the duchy is purposefully short. The rules and history will be fleshed out with everyone’s input as long as they follow the listed tenets. PVP is encouraged in an honorable fashion with the focus being on bandits and outside factions as long as said factions understand the consequences if they are caught. Once the navy is stabilized there will be ample opportunities for those brave enough to challenge permadeath out at sea. The same is true for those who wish to practice the noble trade of piracy. Although not sanctioned by the kingdom except in cases of privateering or war, there may be a port or two that does not ask too many questions when buying trade supplies from ships.

Responsible to the Kingdom for the protection and safekeeping of the High Seas Duchy. Oversees all Counts and provides Military support to each. The taxes paid to the duke come directly from the counts. The details of this will be provided once we have more information related to how game mechanics will handle this.

Chancellors are hand picked by the Duke and held in the highest confidence in the Duchy. They are given the right to speak with the authority of the Duke in the event that the Duke is absent or otherwise indisposed. Well versed in all matters of the Duchy and even more versed in the goals and objectives of the Duke and what they are working towards. They have no ability to publish law or policy on their own, instead they are there to speak for the laws and policies that have already been passed prior to the Duke’s absence.

In charge of the land distribution and economy under their control. Every County will have a focused economy and establish trade routes with their neighbors to ensure continued economic growth. They are free to create laws for their County so long as they do not circumvent the laws of the Duke and King.

Mayors are directly under the Count who’s authority they fall under. All conflict between mayors and their County’s leadership will be handled internally. The only time the Duke will get involved is if conduct is having an effect on the Duchy’s economy or security as a whole.

In charge of the military strongholds of the duchy. All outposts will enter a contract with the Duke to ensure proper defense and manning. The duke will pay a portion of the resources needed to maintain the outposts in relation to their strategic importance. When not at war, the Barons assist the Counts and citizens in their area of operation. For example, they can provide law enforcement, protection, and escort services. These services are contracted between the Count or citizen and Baron with the understanding that a call to arms by the King or Duke renders the contract on hold until the call is over.

This role is for those who aren’t satisfied with being a landlubber. Whether you are a merchant, pirate, or member of the Draugr Fleet a sailor makes their living off the sea.

The backbone of the Duchy. While everything points to the sea, the citizens are the ones to ensure that the land based necessities are provided.Whether you want to be a farmer, blacksmith, tinker, tailor, etc. You are welcome in the High Seas to practice your trade.

A stable and thriving economy is the anchor to any duchy. Comprised of all the counts with an equal say and the Duke having final say if something cannot be agreed on. All decisions pertaining to the economic growth of the duchy will be decided by the council. The main purpose is to design proper infrastructure and economic growth in the duchy. The counts will communicate their economic focus and work out any overlaps to ensure trade resources flow where they are needed. Depending on game mechanics, more positions may be added to the council to ensure all aspects of governing have proper attention given.

Comprised of all Barons. The barons of the duchy will advise and answer to the Duke in all things military related. Unlike the Council of the Anchor, the Sword is an advisory council. The Duke will have final say in all decisions and pass down military orders the Barons will be required to follow. Strategic importance will be ranked for all strongholds. Coastal and border strongholds will be allocated more resources to ensure the safety of all within the duchy and kingdom. Again, support positions may be added to the council and military based on game mechanics.

I am not of the nobility, aristocracy, or landed gentry. I am a just a peasant, but your Duchy has interested me. Oceanus! I love the ocean and sailing, and exploration. It sounds like the capitol of this Duchy would be perfect for me!

And, I am already in Vornair too! 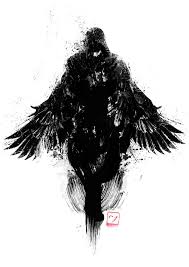 I am Count Sumdeus. I am very interested in joining your Dutchy assuming certain conditions are in place. I would enjoy chatting with you a bit more about your Dutchy, foresight on it's future goals, etc.

Although i'm very unfamiliar with Discord, If i'm able to find you, I will come chat!

I am the count Clement DeMontygnac.

I really like the way you will manage your duchy, in a true feudal way!I already want to focus in exploration/adventuring and developing an elyrian encyclopedia Britannica like.I am willing to invest in research and development for seafaring . Eventually getting my own ship(and dock) to send in exploration and adventuring ,maybe privateer action too.I will choose my county base on resource((1st)mining/(2nd)farming/(3rd)forest) and land area.If I choose an inland county , I will buy a plot of land in a coastal county to get my own dock and work whit the shipbuilder of the duchy to get best ship .

Important thing to know : My native language is french (Montreal/Quebec/Canada) , my English grammar can be awful and I can say things that makes half sense ... My reading and listening skill are nearly perfect thanx to the internet and gaming !

For this game, I think it will be easier for me to play whit people in the same timezone as me, if not critical .

I pledge to follow the rules you mention here and the rules of the kingdom of Vornair ! I would like to join your duchy!

I will make a real post to present my county and my main city.

Will send you my email whit the messaging system. Will maybe try the Vornair discord but communicating by writing will be easier for me and for you (whit my functional but not that good at all speaking skill)

Thankyou Count Clement DeMontygnac. I will reply to your PM and we can work out the communication.

Perfect ! Will try to be ''discord ready'' for Sunday afternoon. (east coast time) Just have a lot of things to manage irl . I check the Vornair website too , will fill in the application to night.

Hello Duke Kellix! I just wanted to drop in and let you know I'm still working on my plan as we discussed. I got writing and thought I'd go all out. That said, writing a back story for my Count and County/City and County management style plans will take a couple more days than planned.

No rush Sumdeus. I would like to get together with the interested count pledges in the near future for us all to meet each other and start working on the plan.

I am a pledged Count for this Duchy! It is a great place to be! I just saw your post! It looks good and congrats on the Duke pledge.