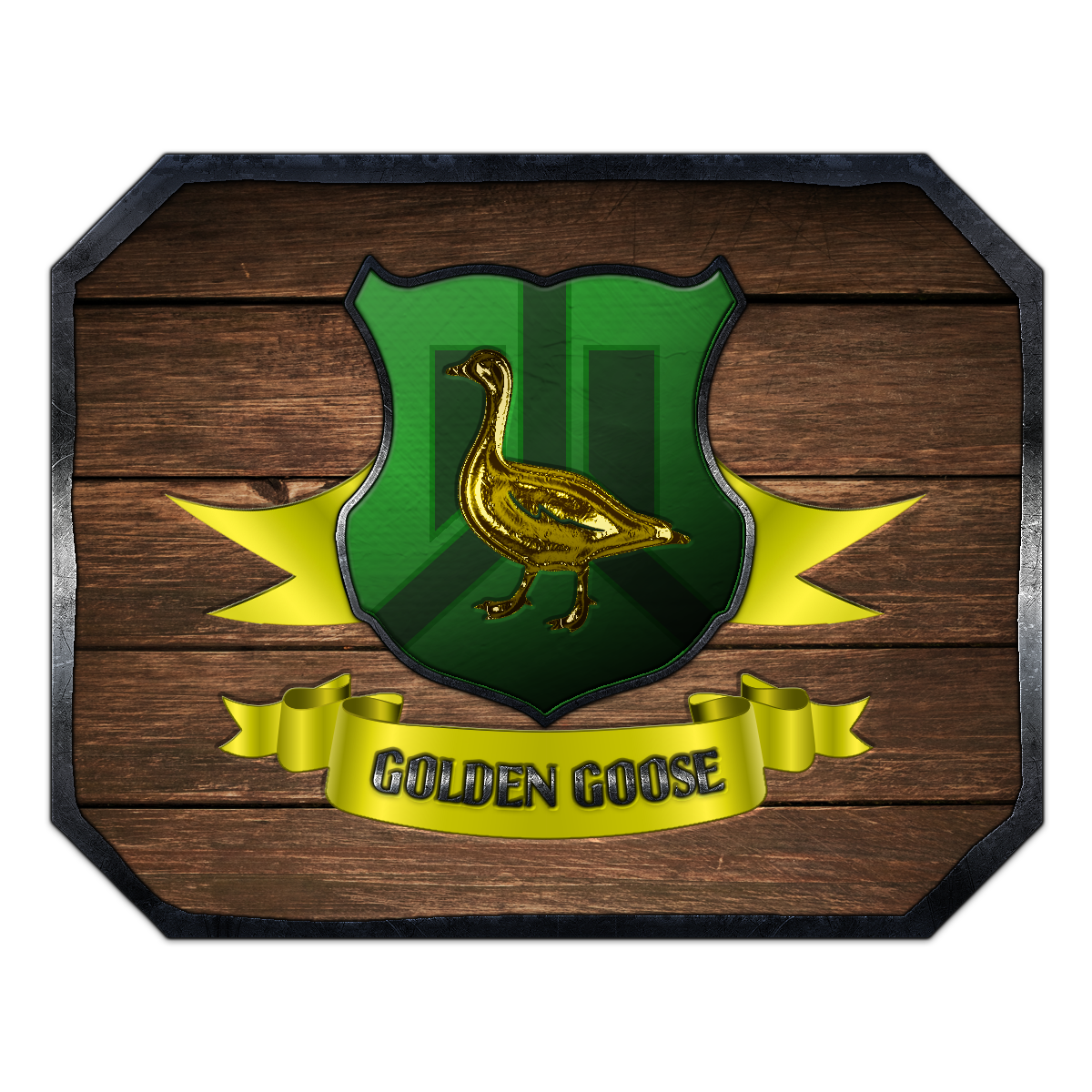 The Golden Goose Company (henceforth Company) is an organisation that aspires to encourage and nurture free trade in the world of Elyria and especially within the Duchy of Feann and its' allies domain.

To achieve this, the Golden Goose Company will be focusing on three different projects; creating a framework for a duchy-wide (and possibly larger) logistics network, establishing a game-wide marketplace and creating a crafting network within the duchy.

In practice, this means we basically aim to be the medieval version of Amazon or Ebay. The way to achieve this, will be through the use of a digital marketplace that we will be developing and maintaining outside the game, separate from the guild, while integrating it with our in-game logistics network on the Selene server.

Where is it located?

Here, the guild has its' headquarters and exists in a symbiosis with the town. The town provides needed manpower to help the guild with the daily work, in return for access to bulk purchases and financial aid.
Cap Town is a place whose focus in on introducing new players to the game and helping them get specialized in their preferred choice of craft, adventuring or soldiers.
The town helps players getting settled with free lodging and a free starter backpack, which allows new players to get started in the game right away. 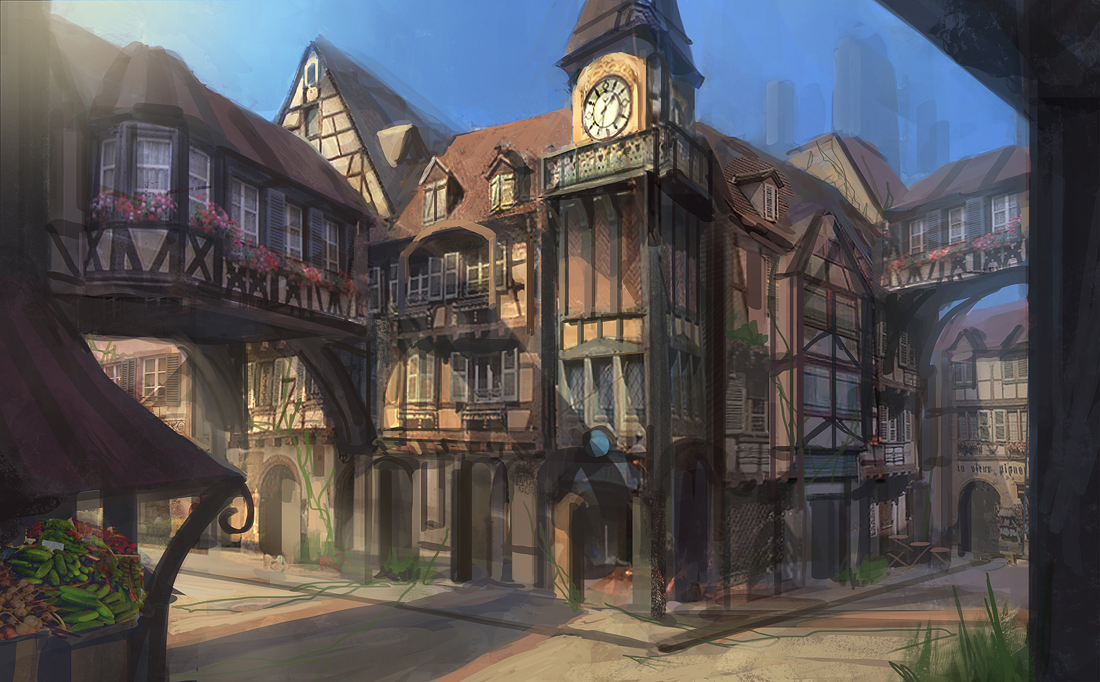 From here, players are helped with specializing in their chosen gameplay area in return for work on the town's involved projects. From this work, players are awared with "Goose Tokens" that allows them to buy lodging, goods or equipment for their own needs.

If this sounds interesting to you, you can read more about Cap Town's plans here.

The primary project of the Company is The Digital Marketplace. This is a website that will allow individuals, guilds and other entities to publicly buy and sell their goods online. We believe that there is an inherent need in having instant access to a giant assortment of the goods available. This will allow crafters to buy raw materials and sell their finished goods, pvp'ers to sell their acquired merchandise or merchants to sell and buy their wares to make a profit.

The site will initially use the concept of buy- and sell orders, just like a normal market in real life. There are two different ways of buying and/or selling, using a bartering system:

This allows a system of exchange, where it is possible for players to instantly get the goods that they desire as long as they have the necessary goods to trade, or set up their own orders and sell / buy at the their own terms, as long as they don’t mind waiting. 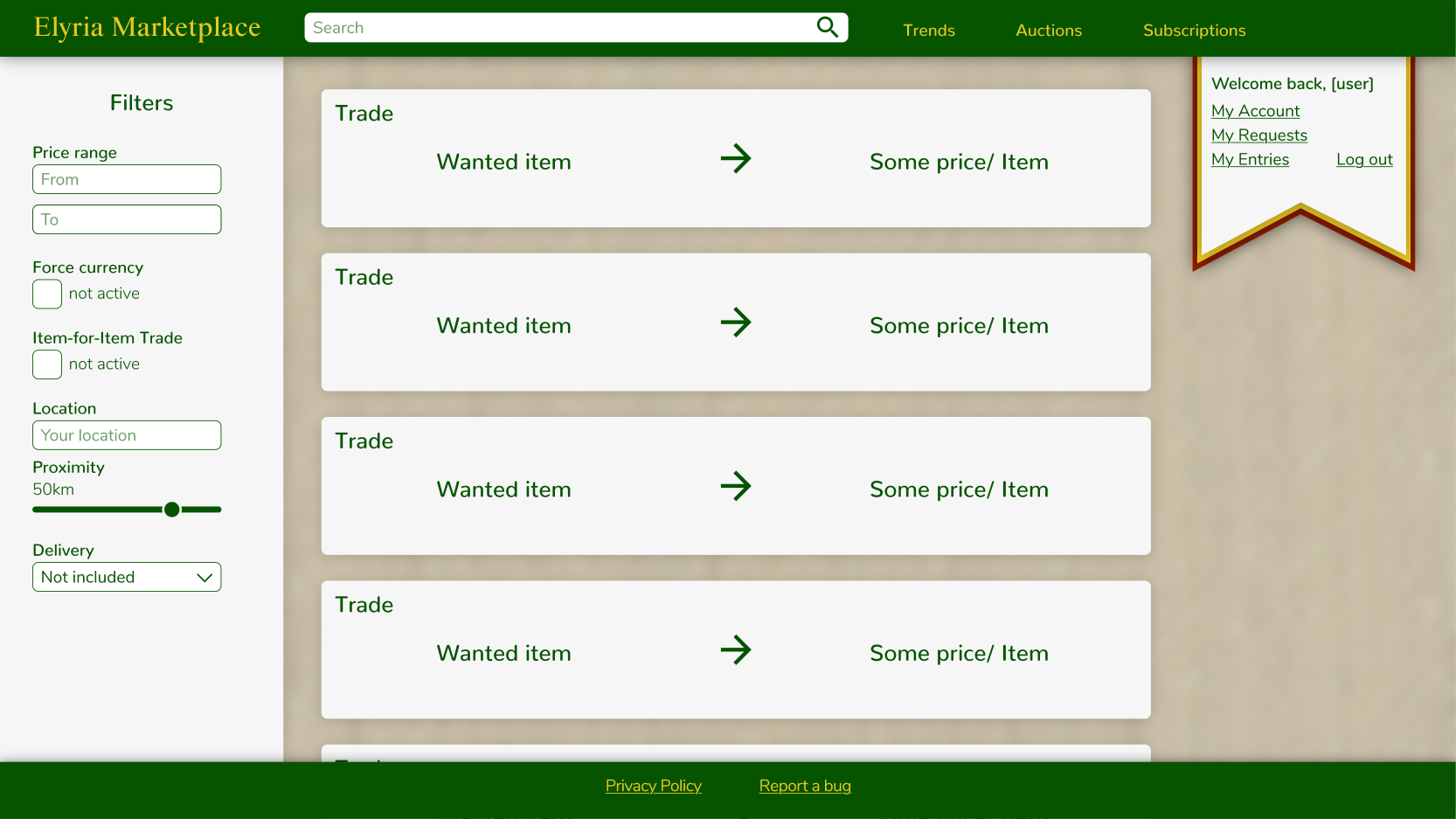 This website is intended for a server-side audience. We hope to help people integrate their own little shops on the website as well as major resource operations across the server. This should help give everyone an easy opportunity buy and sell their resources, because of the easy overview of where goods are available and where resources are needed.

It will also be the common place to go for tools related to trading or economy. For example, we have an idea for establishing an out-of-game way of evaluating equipment using the in-game stats, to generate an out-of-game gear score. Using this, we want to help people evaluate the quality of the item that they're looking at. 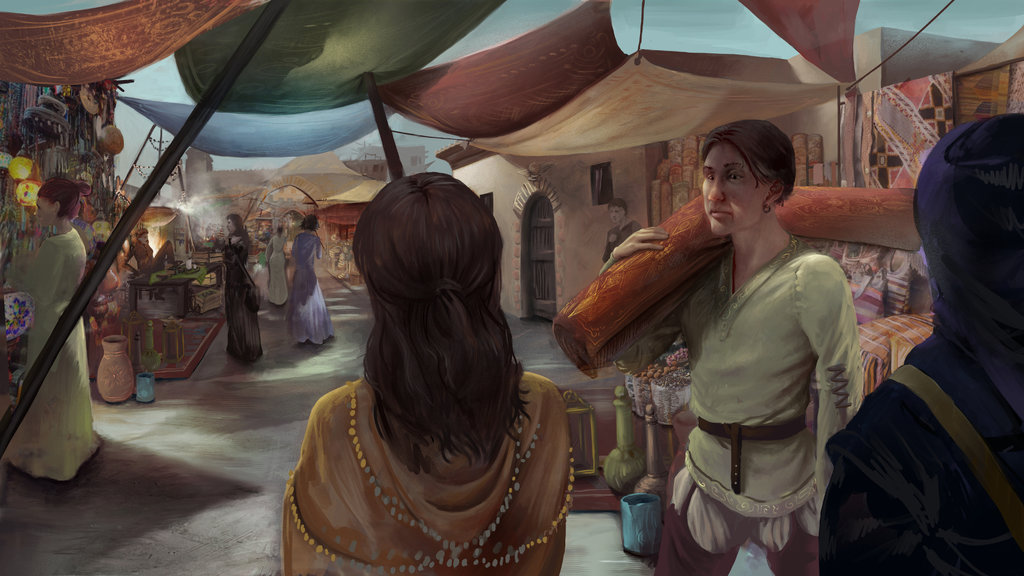 If this sounds interesting to you, don't hesitate to contact us on our Discord here.

So now that you've bought your items on the marketplace, how do you actually get a hold of them?

We intend to establish an in-game logistics network, starting in the Duchy of Feann and expanding as far and wide as possible. The Golden Goose Company will be setting up an initial presence in each Duchy as part of the network, in the form of a Branch Office and Warehouse. These will ultimately be operated and maintained by the guild.

Everywhere else, we will make use of a franchisee system of these warehouses, in which individuals can approach the Golden Goose Company and ask to setup a warehouse in their chosen location.

Warehouses will be the at the center of this operation. They will be the drop-off and pick-up points for items from both buyers and sellers, as well as temporary storage locations for bigger hauling jobs.

Each warehouse will be operated and owned by a Warehouse Owner, who will be the head of a particular warehouse. His job is to make sure that it is well maintained, protected and operating smoothly. This includes hiring haulers and guards, to make sure transport jobs coming from the Market Site are transported to the correct destinations, safely. It is also the responsibility of the Warehouse Owner to uphold local laws, I.E. paying the necessary taxes. 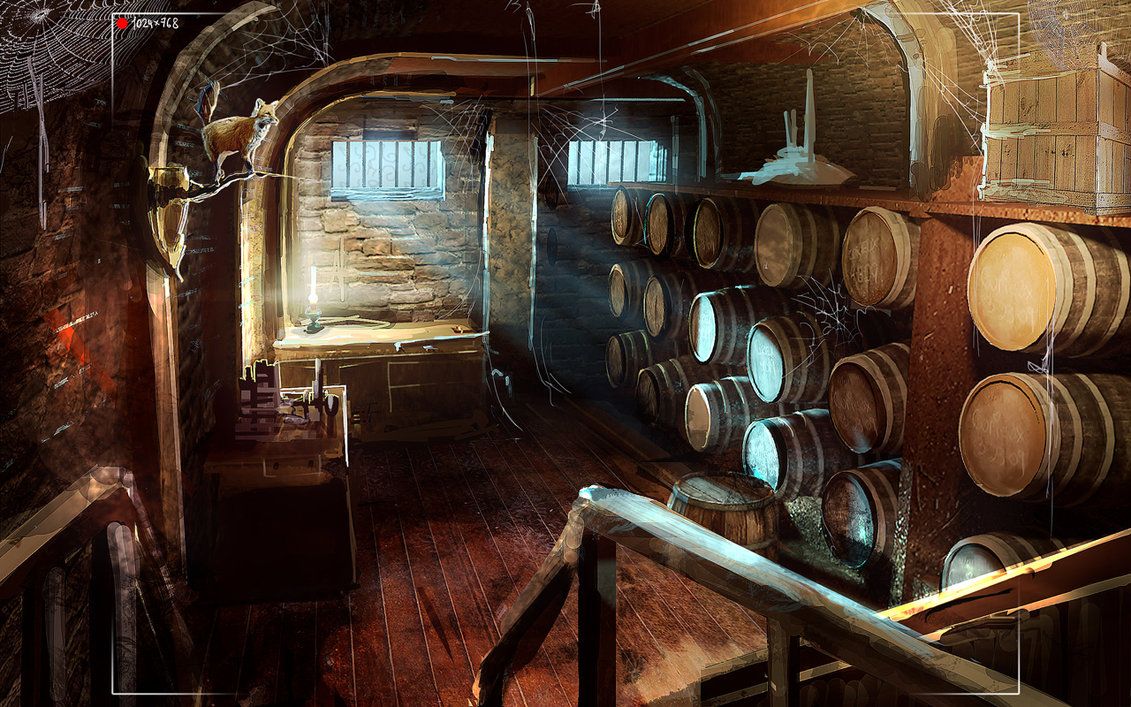 Exchange of money and goods

We've worked with the idea of integrating the website with some kind of banking entity. This would allow players to exchange currency in-game to receive online 'credits' that could then be used to buy goods. This would thus enable them to instantly pay the involved parties for the entire transaction, making everything a lot safer and easier.

Initially, however, we can't do this. So we see the following possible options for the exchange to happen:

As for the exact details to the process of each of these, we have ideas as to how it should work out. But we're waiting for more information on game mechanics, to come up with a finalised plan. Suffice to say, we'll be doing our best to implement a simple workflow that covers the vast majority of cases.

The Company will make use of a flat hierarchy structure. Three officers will be appointed, whom each will have their own area of expertise. The three officers will naturally be working in close tandem with each other, with an aim to improve the Company's position as a whole.

The Logistics Officer’s primary task is to establish the Logistics Network. This is done by helping Warehouse Owners getting established and with operation of their warehouses, as well as helping duchies establish their road network. He can requisition funds from the Marketeer Officer to achieve these goals.

Warehouse Owners are members of the Golden Goose Company, who are in charge of the operation of the warehouses in the Logistics Network. Individuals who aspire to build a new warehouse can contact the Logistics Officer and come to an agreement with him to establish a new warehouse and become a franchisee.

The Crafting Officer is the public face of the Guild. His job is to establish a network of crafters, that can be used to complete big crafting projects that the Company will be taking on, as well as helping the Marketeer Officer making sure that the Company is sufficiently funded.

The Marketeer officer's job is to establish and run the central market and providing the Golden Goose Company as a whole with funds. He can buy materials and goods with guild funds, to be resold on behalf of the Company and helping the other officers with their duties. It is also the sole responsibility of the Marketeer Officer to manage the Company's money and accepting requests for funding for Company sanctioned projects, even if these requests comes from other officers.

The protective troup of the Company, they're the internal corp of guards that we will be making use of at our own warehouses as well as offering assistance to franchisees. 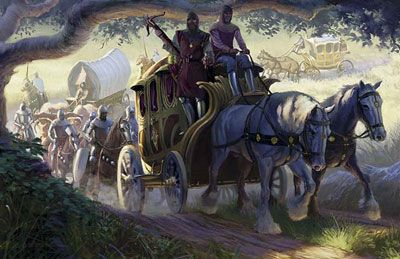 Working for the guard involves combat and travelling around Elyria alongside the trading caravans, resulting in a lot of travel. Any bounties acquired during a contract are the sole property of the entire guard squad assigned to a caraven. So if you're a fighter who wants to get paid for travelling, this is what you're looking for.

Upon the initial founding of the guild, the position of officers and guard captain will be held by:

The organization needs players who are interested in the mercantile gameplay, crafters, logistics people including delivery men, scholars, bankers, caravan guards and more.

So if The Golden Goose Company (or Cap Town) sounds like an interesting place, you want to work with us or maybe if you have any questions, how do you get a hold of us?

You are obviously free to attempt here on the forums, but the easiest way would be to get in touch with us on our Discord server. Other than that, we'll obviously be checking in on the forum as much as possible.

We're open to feedback and suggestions. It's a project under constant development and will continue to evolve as more information about game mechanics and domains are made public.

All of the information above is liable to change as we get to know more about what the in-game mechanics allow.

Nice projet my friend, i would be happy to have one of your branch in my Counties !

Hello, guys, my goal in game is to provide transport for goods, I'm interested in logistic with maths. I'm actualy starting in the County of Midgard. How could I contact you to have a closer look of the system and discuss? I have great experience in finance and trading, maybe I might be a good advisor to share info.

Hello, guys, my goal in game is to provide transport for goods, I'm interested in logistic with maths. I'm actualy starting in the County of Midgard. How could I contact you to have a closer look of the system and discuss? I have great experience in finance and trading, maybe I might be a good advisor to share info.

Thanks Sang. There will definitely be a lot of work ahead of us, so anyone interested in working together with us as warehouse frachisees, guards, investors, traders, crafters or transporters are most welcome!

I'm definetly interested using your services in the future!

Updated the post a little, added some new headers and posted a short primer on the town in which we'll be located.

I'm excited about the upcoming map vote, because it will finally give us something tangible about the game. Hopefully domain selection comes soon after, so we finally know where we will be in relation to everyone else.

We're still looking for people who wants to help by running a warehouse, commit funds towards the project, trading partners or otherwise help out in some other way. Feel free to get in touch!

Currently started work with a new group of guys called the Selene Commerce Consortium consisting of highly influential people from tryggr, nirath, al-khezam and possibly demalion to see if we can agree on a way to conduct commerce and align our processes.

For any of the people newly active due to D&SS, we are looking for people interested in running one of our warehouses, trading partners or would otherwise like to be a part of our organization. Get in touch!

Bump with some updates.

This seem like a great idea. I would very much like to give representation for The Company within my town of Jubilee, home of Free Mann Tavern.