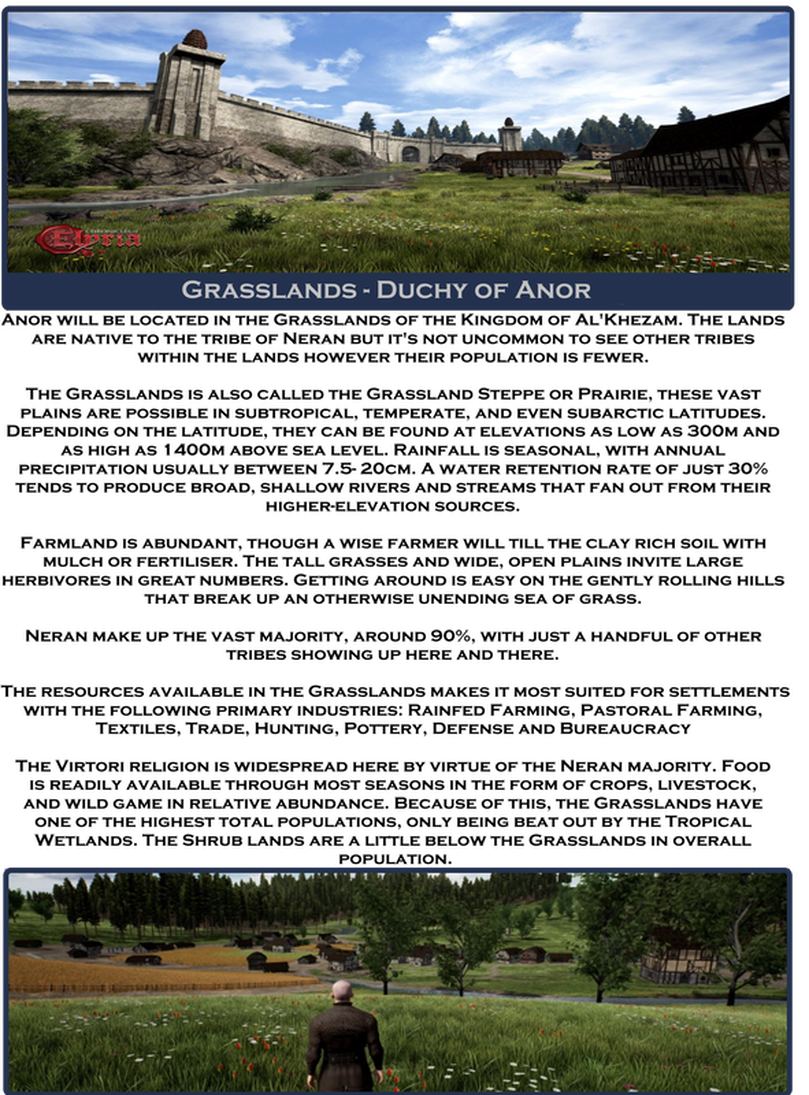 Dawn's Reach is not just the Capital City of Anorath but of the entire Duchy of Anor. The City has grown to such a size that it is completely unrivalled by any other City in the Duchy and boasts the largest most dense population centre. This huge population coupled with it's size provides a large melting pot of tribes and peoples, a true multi cultural utopia. Buildings in Dawn's Reach are some of the most architecturally beautiful aswell as some of the tallest ever seen.

Protection of the Capital of the Duchy is unquestionable and strong walls and forts provide extensive defensive capabilities for miles around.

There is a saying that all roads lead to Anorath and this is as true a statement as they come. Trade flows directly into Anorath from surrounding regions before moving back out to distant lands beyond the Duchies borders. Anorath is home to every profession you can imagine, Leather workers, cobblers, Butchers, Tailors, Paper-makers,Scribes, Dye-Makers, apothecaries, alchemists, Cooks, distillers, brewers, Blacksmiths, Miners, Jewelers, Masons and farmers. The list truly does go on.

Current Vacancies - We are looking for the following:

Traders - All individuals in trade including industry

Monks of Virtori (Will be promotion in game)

Anorian Guard (We will be looking at promotion in game)

Masons - We are looking to develop Dawn's Reach with new buildings and custom architecture.

Grand County Anorath is an enormous trade hub, goods are often imported from the surrounding Counties to be checked and processed and then exported out to the other Duchies in the Empire and beyond. The bustling hub brings in many traders, shoppers and delivery companies aswell as caravan guards looking to ensure safe passage of peoples and goods in and out of the region.

Within the Counties own rural areas, Mining for ore and precious stones and metals is a large part of the economy and so too is the manufacturing of weapons and armours for the large number of Baronies protecting the region.

Woodcutting and woodworking is just as widespread and laws exist to protect this valuable resource ensuring when wood is used it is also re-planted for the future. 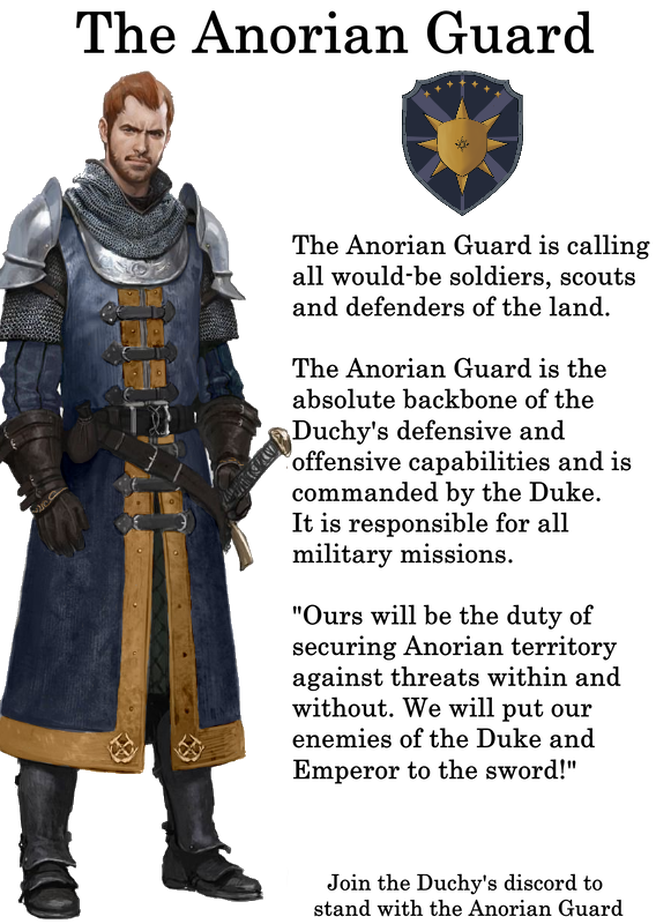 The head of the Military is the The Duke and is assisted by the Knight Commander (Steward of Anor). This position is currently held by High Baron Creighton Halleck of the Barony of Londo.

The Anorian Guard is the absolute backbone of the Duchy's defensive and offensive capabilities and is commanded by the Duke. It is responsible for all military missions.

Aswell as the defense of the realm and going to war against would be aggressors the Anorian Guard deals with intelligence gathering and intelligence missions. With eyes and ears everywhere, scouts ensure they know precisely what is going on and who is or is not a threat.

Anybody willing and able can join the Anorian Guard. Benefits include access to the best weapons, armour and training facilities available aswell as payment for completion of Missions.

To learn what Missions may be undertaken please click here to visit our 'Organisations of Anor Thread' for more detailed information. 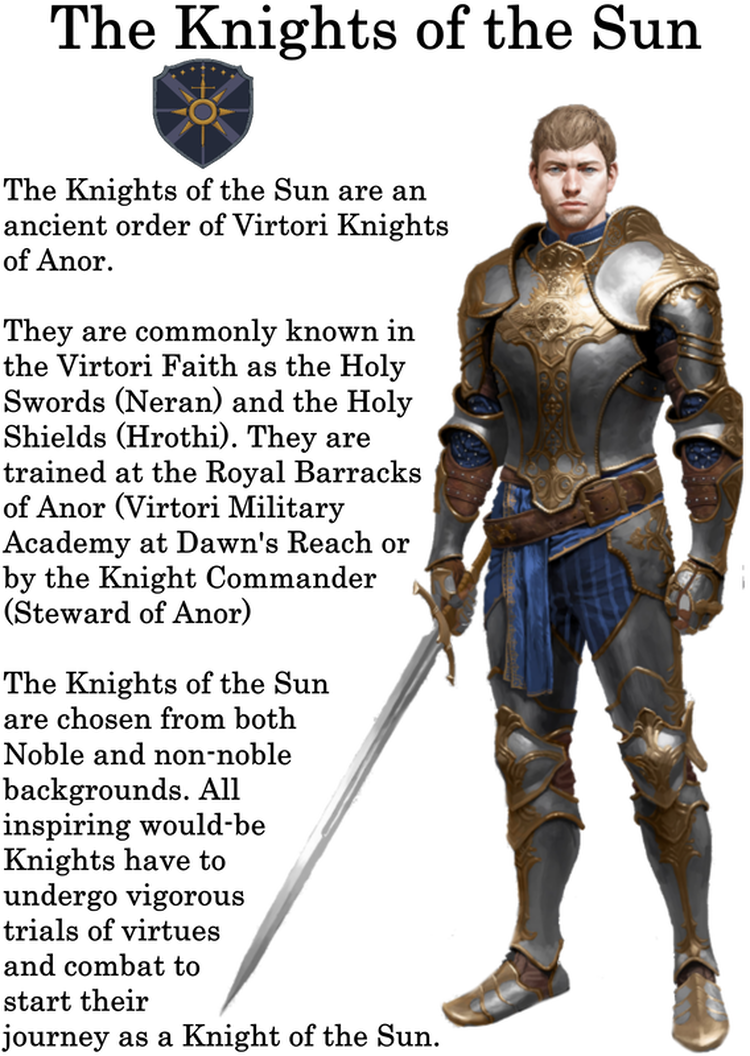 Nobles or Soldier's that are spotted can become a would-be Knight of the Sun. The Knights of the Sun are an elite chivalric order within the Anorian Military and only the finest menn and womenn gain the right to join. The Knights are usually handpicked from Nobles or the Anorian Guard when they have proven themselves worthy of Knighthood. So long as they prove their valour and their sworn loyalty to the Duke and the Duchy of Anor, they will join the orders ranks and take their rightful place after vigorous training and trials.

Knights are responsible for some of the more important missions, aswell as personal guard for the Duke and Duchess, should it be required and training and handing out missions to those of lower rank. All Knights gain access to a specially designed set of armour, designed by the Duke himself for such a prestigious group of warriors. Other benefits include payment for services and access to excellent equipment.

With the huge diversity of tribes and peoples in Anorath comes the blessing of different experiences. Living here gives Citizens access to a bounty of different clothing styles, architectural marvels plus a vast variety of foods, delicacies and fine wines. The imports that flood in truly gives an unrivaled standard of living for Anorians.

When one lives in Anorath no day need every be the same.

Duke Alduin understanding the importance of infrastructure works hard to ensure that all settlements within the County are fully connected and that perfectly maintained trade routes exist into and out of the region. Exports of the Counties ore, metals and other manufactured goods are of utmost importance. 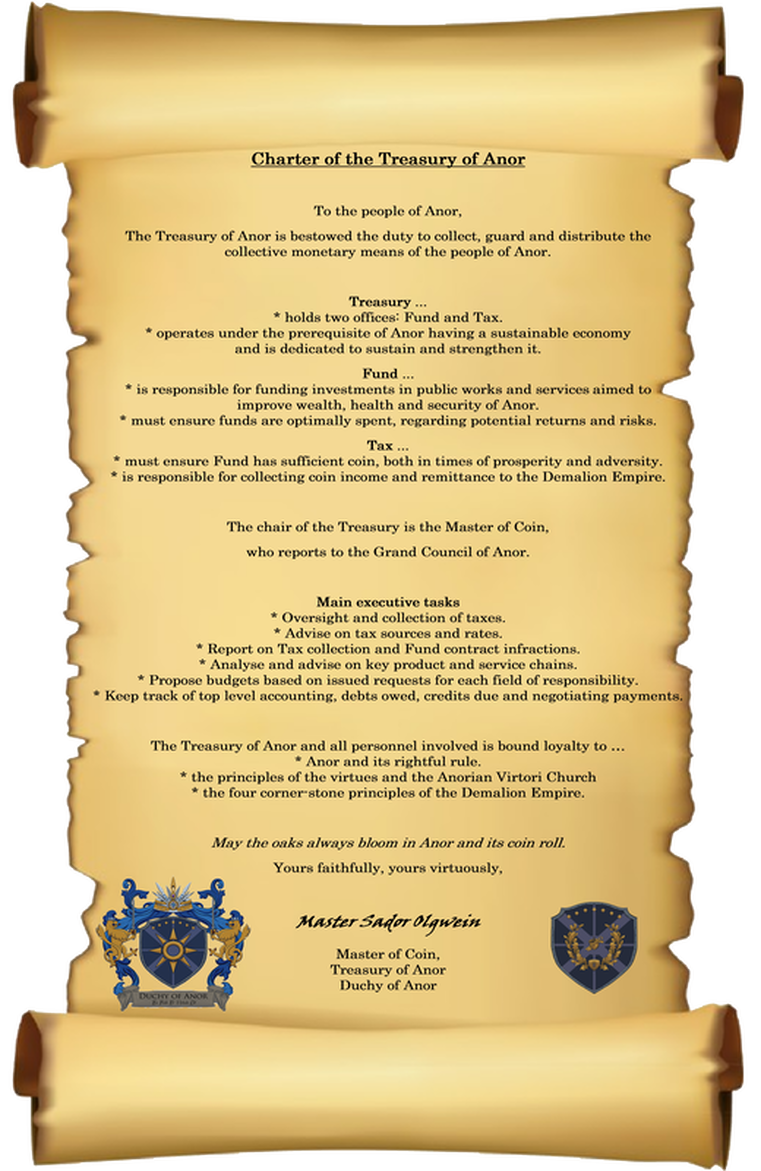 Want to earn money? check out the Organisations of Anor thread by clicking here and see what work is available from the Grand Council.

Connecting the Duchies Capital City of Dawn's Reach and County Capital of Isilme is the Two King's Road. The road was named in honour of the alliance that was once formed between Line of Alduin and Line of Adley when they unified their forces to oppose a joint enemy who threatened their very early existence.

The alliance which was formed between the two was forged when both these menn met each other during the night at the midway point between their respective settlements, it is here where now stands the Two King's Inn that both menn signed their names to an agreement that would eventually bring them victory against a common foe. It is following this agreement and victory that Line of Adley would later be married into the line of Alduin.

Today the road is used by many people wishing to move between the settlements whether it be by tourists wanting to see the other City or traders moving their goods. The Two Kings Inn located at the central point of the road between the two settlements is known for it's delicious food, fantastic ale and pleasant welcoming atmosphere.

Along the roadway on either side, many citizens have been given the opportunity to develop the land, being able to purchase parcels and build homes and farmsteads along the entire length of the route meaning travelling the route is both interesting and safer.

Learning is not attained by chance, it must be sought for with ardour and diligence

The more people that are members of a School/University in Elyria the faster and more greater it's accomplishments are when it comes to discovering new research and technologies, because of this it was decided that Dawn's Reach would be the location for a grand place of learning and the City now holds the largest University in the land which can be easily accessed by citizens across the Duchy thanks to the excellent road networks connecting the many settlements.

The university of Anor is dedicated to the furthering of education, research and technology within the entire Duchy. This is made up of trainers and teachers who are paid whilst other members pay to receive training and gain access to the school’s resources. The funding comes from a combination of paying members and grants from the Duchy. The main advantage of the University of Anor is that its members are offered increased and rapid opportunity for learning. This is in the form of consolidated access to skill trainers, and specialised research tools. As new technology is discovered, all students immediately gain access to the new knowledge. This will benefit the whole of the Duchy.

The Virtori are one of the five major religions of Elyria, practiced primarily by the Neran and Hrothi tribes. Virtori teaching is centred around the existence of powerful Gods and their Guardians, representing the 7 virtues and 7 vices.

Virtori believe that there was a war between the Virtues and Vices, with Mann-kind being caught in the middle and ultimately sealing away the Vices and Virtues to protect Elyria from the Gods.

It has been stated that the Virtori fighters are the “Paladins and Clerics.” In Virtori lore, the Neran’s and the Hrothi are the Sword and Shield of the Virtues, respectively, and are often depicted as such in religious artwork.

The official Religion of Anorath is the Virtori faith and Virtori religious iconography and buildings can be found throughout the Grand Counties Capital City, where the awe inspiring great Virtori Cathedral towers over all things below it. People come from miles around to visit the Cathedral and practice their faith. As Anorath and Dawn's Reach act as the Duchies Capital the Arch-Bishop often resides here within the largest Cathedral in the land.

If you wish to join Triple Grand County of Anorath and become one of it's Citizens then please feel free to join the Duchy of Anor Discord. Please click the Discord image above to gain entry. Thankyou. 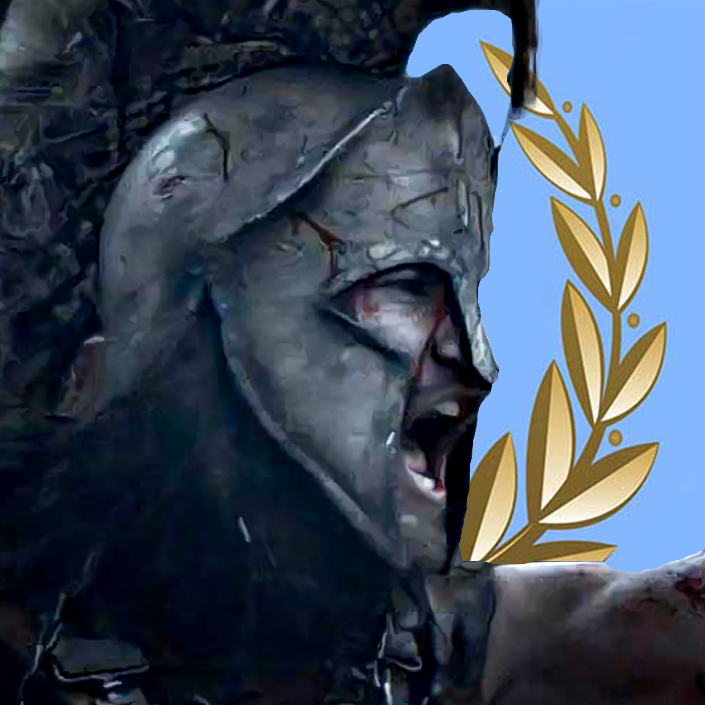 Great Job there mate, magnificient Presentation, worthy of a true Duke. Good luck on your Endeavour

Great Job there mate, magnificient Presentation, worthy of a true Duke. Good luck on your Endeavour 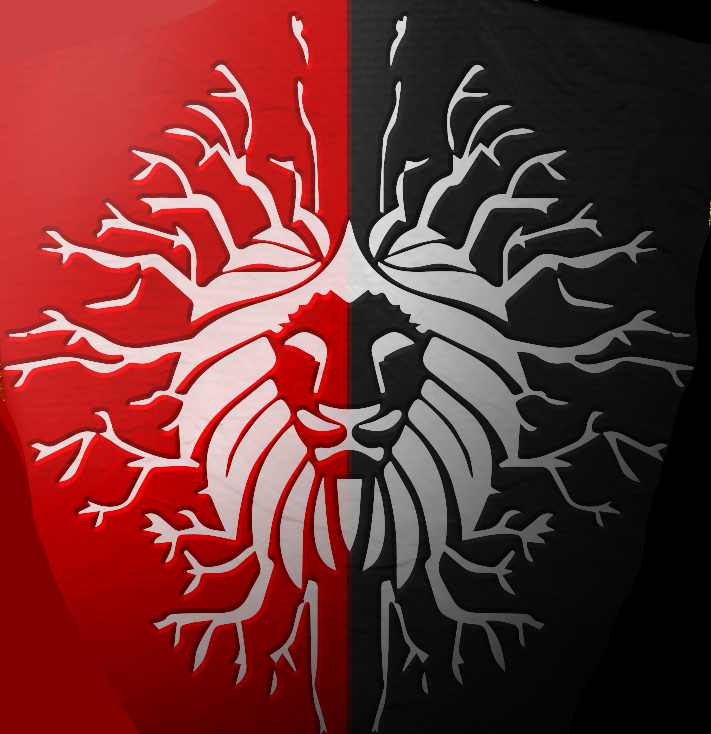 I'm glad to be part of this County. I will live in Dawn's Reach as Gentry Proprietor. Thanks for the great welcome at Discord.

We are still actively recruiting for the Grand County of Anorath, Duchy of Anor.

We currently have Dawn's Reach, Isilme and the Barony of Londo.

Please also see our new coat of arms for our county and duchy.

I've just joined this Duchy of Anor, via their Discord (see link above). Really friendly crowd and lots of good ideas. The excellent and thorough presentation, above, really helped to 'set the scene.' (It also made me aware that, if they display this level of forward planning and serious thought, at this stage, they are indeed a great place to be!).

Pleased to meet you, fellow Anorians!

I have joined Anor on September 17th and I am looking forward to lots of inspiring and thrilling roleplay and adventure!

House Wulfcyn has lived in Anorath for long, and has its main seat in Isilme.

Earneag Wulfcyn may initially focus on bowyery, fletching and hunting to earn a living and later on, as a proprietor, establish a buzzing Hunting lodge in the outskirts of Isilme, maybe some hamlet connecting Isilme with the wilds. An outpost and hub, where parties of hunters, explorers, herbalists and prospectors gather, enjoy a simple meal and drink, and possibly even stay for a night before they leave for perilous adventures in the wilds. The lodge is set to gather the finest game and game products for the inns and court kitchens of anorath, and herbs or intelligence on where to find them. 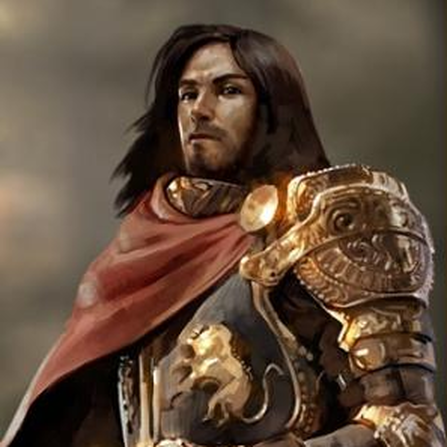 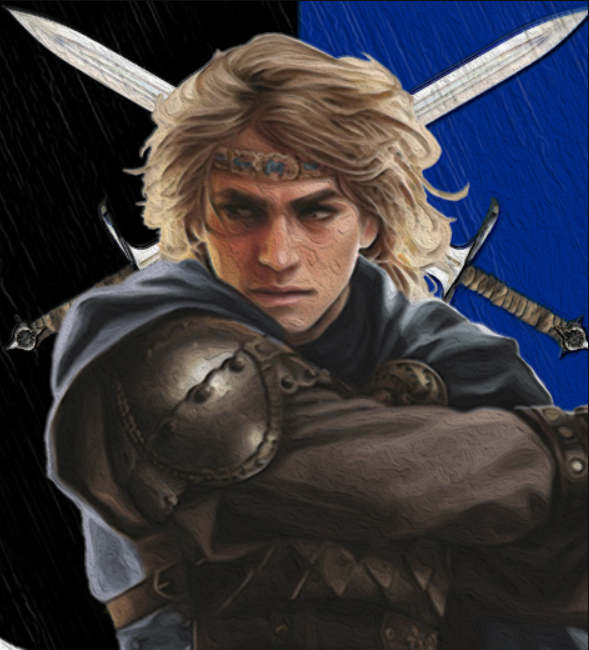 Very good post with a well thought out structure and mission. It is good to see that different RP communties are forming in the world of Elyria.

I look forward to any future interaction between Anor and Tynwael to create some interesting RP stories..

Nice thought Zandyl. We could very well end up as neighbours ;)

Please check out our website of join our discord.

With settlement selection upcoming, I am looking forward to find a nice humble settlement for House Olgwein in Anorath near Dawn's Reach and name the place Aerthad.

The creation of a thousand forests is in one acorn