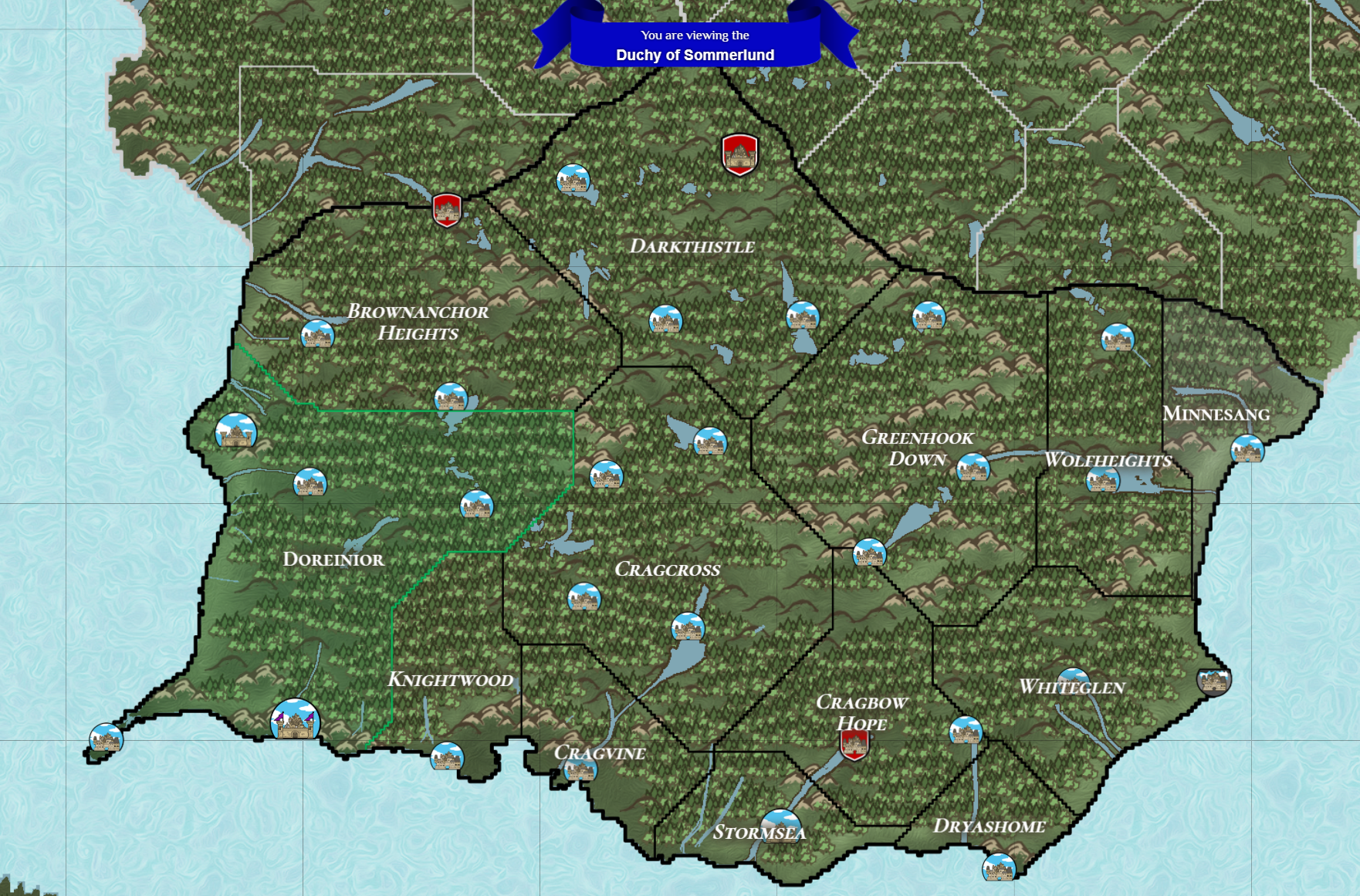 Home to many traders and scholars, the County of Doreinior seeks to provide its citizens the necessary infrastructure and support required to flourish in their chosen profession. Being a Trading and Educational hub however, funding will necessarily go into the building of Markets, Ports, Warehouses, Transport, Roads, Schools, Libraries and Laboratories to push the boundaries of development. That is not to say that there will be no funding or support for other professions, but they will only happen on a need-to basis where progress have become stagnant.

As a form of social contract, citizens of Doreinior will pay taxes not exceeding 10% of their income, harvest or produce, tiered according to their economic status, in order to sustain this progress.

There is also a saying in Doreinior, "You do not own what you cannot defend." Citizens of Doreinior are also expected to take up arms in its defence. It is strongly encouraged that all citizens from the age of 18-45 take up soldiering as a secondary or tertiary profession.

The City of Osteinior is where the seat of power of the current Count is at. The Yongs have ruled this area for hundreds of years ever since they signed a treaty of fealty to the Duchy of Sommerlund and the Kingdom of Aequitas. Within the City lies a Cathedral dedicated to Virtori and a temple dedicated to the Faedin. There are also two schools, one focused on Scribing and Mercantile skills, known as the Kegwehn's Management Institute and the other dedicated to Healing and Soldiering, known as Hotin Military Academy. The Inner Council is a group of 5 advisers assisting the Count in the management of the County, traditionally known as the Einior. They are,

The Council of the Pillars

All Einior must be Citizens of Doreinior and of good standing. Wherein a Citizen of good standing is required to be a Resident owning a residential property in the County of Doreinior and of good reputation among its citizens and no history of serious criminal/deviant behaviour. Citizens of good repute with deviant skills are more than welcome to try for the position, it is just that being caught before speaks volume about your deviant skills. Remuneration of the Einior's service and their Sub-council is as described in the budget below.

10% of the remaining revenue will placed into the reserve. This 10% will either be kept untouched or used to purchase easily liquidable precious metals of stable value to ensure liquidity in times of crisis. Doreinor's reserve will be directly managed by the Count/Countess.

Of the remaining revenue, the breakdown is as follows,

15% will be given to the Council Of Naur to be specifically used for,

15% will be given to the Council of Ceven to be specifically used for,

20% will be given to the Council of Raud to be specifically used for,

20% will be given to the Council of Nen to be specifically used for,

20% will be given to the Council of Gwelu to be specifically used for,

The remaining 10% will be used for government administration including the remuneration for the services of the Count, Einior and Byr-Einior. The model used for remuneration will be similar to a profit-sharing model in which the Count and Einior receives no more than 1% and 0.8% of the Budget respectively. The remainder will be divided evenly to Council of the Pillars and further sub-divided to each Byr-Einior under the discretion of the Einior-in-charge. This model is used to encourage (hopefully) the Count himself, the Einior and the Byr-Einior to do their best to develop the County of Doreinior.

tl;dr. Doreinior is a great county to settle or invest in. Rest assured that your taxes are well managed to ensure maximum returns to yourself in the form of Physical, Social and Economic Security. Move into Doreinior now! (Or at least when the game starts) Welcome to Oceanus! Great forum post, it's nice to see another trading County in the works. If you want to, you can stop by our discord and say hello. Welcome again.

Thanks! Still trying to improve my post though. Not quite sure what else to add in.

Wow - very meaty backstory, I enjoyed it very much. I get a Tolkien/Brooks-esq feel from it. Thanks for sharing.

If you are looking to settle within a duchy with likeminded goals, King Xak's duchy of Lorandor within Lor Voskara, will situate itself as an academic and spiritual hub.

Feel free to stop by and say hello or share some ideas:

Best of luck with your journey and I look forward to reading the next instalment of that lore :)

Wow - very meaty backstory, I enjoyed it very much. I get a Tolkien/Brooks-esq feel from it. Thanks for sharing.

If you are looking to settle within a duchy with likeminded goals, King Xak's duchy of Lorandor within Lor Voskara, will situate itself as an academic and spiritual hub.

Feel free to stop by and say hello or share some ideas:

Best of luck with your journey and I look forward to reading the next instalment of that lore :)

Lorandor does have a lot of ideas that I can relate too... However, I find that joining up Falrenstal in Aquietas will suit my ideas better.

Thanks for the invite anyway. Hope to be able to find opportunities for trade and cooperation with you and King Xak.

Hear ye, Hear ye, Lords and Ladies, Gentry and Citizens! On this day, Baron Kishouken is appointed as the Einior of Fire! May he lead our defence well!

The County of Doreinior has picked its location!

This is great stuff dude! Nicely put together. :)