“Nothing strikes sheer terror and unease into the hearts of men that the sight of the banner of the Crimson Wings. The white background contrasts the sheer black crow, outstretched wings coated with the blood of the enemy. These men are the men of legends. All have tasted battle, been bloodied in war, endured the rigors of training, and had the doctrine of honor, courage, and loyalty ingrained in their minds from day one. Waves upon waves of enemy forces can smash into the Crimson Wings front lines, and they will be tossed backwards through the sheer determination of these forces. It is said that wherever the Crimson Wings march, the crows fly overhead, knowing that their namesake will provide a feast through their ferocity.”

Historians tell of a battle that raged ages ago. The names have become muddied in the lost tomes as they pass from the written word to the spoken tongue. None know the reason that stared the conflict, or the names of either side that raged for two years. All that remains is the story that came to pass on the final night of the siege. Forces faced each other across a blood soaked, battle scorched field. This site will be known in the future as the Capital City of Avernus, in the County of Osthelia. Crows wheeled overhead, ready to begin their feasting. Black smoke and ash from funeral pyres stained the air. Neither soldier had seen the sun in ages, or smelled air that didn’t stink from the dead and dying. New recruits may have composed some ranks of either, but every single man that stood there had been bloodied in the war. No one was a stranger to violence now.

The vanguard of the defending army stood ready, their force alone facing the enemy. It was a token force, not even half the size of the opposing force. The main body of the defending army lay ready behind the castle walls. It was a foolish strategy, vastly different from their enemy. They attacked as one massive body, no need for a vanguard force or cavalry. Like a tidal wave crashing against a cliff face. Eventually the ocean wears away the rock. The Lord of the defenders held to traditional tactics, and only the will and determination of the men had allowed them to hold the opposing force at bay. They were outnumbered, and should they fail, they would be slaughtered to a man. The vanguard were brothers in arms, together from the very beginning of their training. They had all lost brothers in this war, and slowly the rage had been building inside them. They wanted revenge, to make sure their brothers didn’t die in vain. Bloodlust coursed through the vanguard now, and tension hummed through the ranks, and their weapons were ready for the next taste of blood.

Trumpets rent in the air, and the battle began. The vanguard surged together into a circle of shields and swords. The enemy force converged around them in a storm of violence and death. The battle raged for hours, and slowly the vanguard began to lose more brothers. The commander couldn’t ignore it any longer, he refused to lose any more men. And the enemy would pay with their own blood. He let out a bestial roar that his men instantly echoed, and deep within the fought with reserves of strength and ferocity that they didn’t know they had possessed. The true slaughter began then, and sudden fear ran through the spines of the enemy force. Their commander called a halt and reformed their ranks. The terror grew as they watched the vanguard force in front of them.

The only intact from the pages of history reads thus, “The vanguard stood in front, naked blades in their hands, gleaming scarlet from their enemies. A mere tithe of five hundred men, stood unflinching in the face of certain doom. The enemy force of over fifty thousand felt terror as they observed the small group. Their white cloaks shredded and billowing in the wind behind them, stained red. The crows wheeled overhead, and their calls seemed to favor the vanguard. The vanguard commander stepped forward, and raised his blood covered blade into the air, and the men screamed in defiance before charging. The crimson stained cloaks flew behind them, the crows cried out eagerly, cheering on their brothers below. The enemy watched as death was borne towards them, carried by crimson wings.”

Greetings all, I am Garrett Hawke Crowley, Commander of the Crimson Wings and Personal Sword to my brother Count Andreas Crowley. If you wish to join the Crimson Wings you are under my direct command. We are based within the City of Avernus, and our jurisdiction ends at the borders of the County of Osthelia. The Crimson Wings are the main military and justice force in Osthelia, we answer the call of our Duke Polite and Duchess Silvia in Sanctaphandri, and if necessary, we will provide a force in the defense of the Kingdom of Ashland. However, our first loyalty is to our Count Crowley. His ingenuity will help provide a way for us to truly be a force to be reckoned with. Training will be fierce and rigorous, and only the best will make it to the position of honor. Honor, courage, and loyalty are necessary traits in any recruit, and I will not tolerate those who break their oath. If you believe that you have what it takes, then come and speak with me, or my Second-in-Command, Zathros Tirosa. You have the opportunity to join the best, and we will be just like the men in legend.

The Crimson Wings, are the primary military and peace keeping force within Osthelia and the capital of Avernus. In peace time, they patrol the borders of the county and enforce justice where necessary. In times of war, they are the shock troops. Utilizing brute strength and sheer ferocity, along with their discipline they are able to truly sow destruction in the enemy forces. The Commander rides into battle with the forces, not content to stay behind with those making decisions. Commander Garrett Hawke Crowley, serves as Personal Sword to Count Andreas Crowley, serving as his champion and speaking in his voice as needed. Vice Commander Zathros Tirosa will be in charge of the training of new forces and assigning them where necessary, final decisions will be enforced by Garrett Hawke Crowley. See the ranking system below to see where you start.

Raven Initiate: This is where all new recruits will begin, your days will consist of training and education into the true matter of how a knight needs to act in times of peace and war. All Initiates will become proficient with sword and shield, and bow and arrow. After a certain time, once you have passed final assessments, you will move on to the next level: Crow Acolyte

Crow Acolyte: After achieving this level, Acolytes will be assigned to senior knights to act as their squires. Unless deemed necessary by the Commander, they will not participate in main battles. In times of war, they will remain as a county defense force while the main army is dispatched.. The knight they are assigned to will act as their mentor. If they wish to become trained in a certain type of weapon other than the typical sword and shield and bow and arrow then this is the opportunity to do so. Acolytes will be housed in groups of 15, and one will be assigned as Captain of their groups, known as The Flock. Acolytes will serve terms within the City of Yager, under the authority of Baron Alastair Bjorne. There they will serve as a force to maintain law and order in the city. As an Acolyte the individuals must distinguish themselves in acts that will either benefit Osthelia, or perform an Act of Valor. Achieving these ends will allow an acolyte to eventually be promoted to the next level: Talon Knights

Talon Knights: If an Acolyte has been deemed worthy, then the Vice Commander will nominate those worthy to the Commander, who will present it to Count Crowley, and they will present it to Duke Polite. Upon his approval, you shall be knighted and be part of the main force, the Talon Knights. Granted all privileges and rights associated with the honor of the title. You will also have duties assigned in times of peace, including being a mentor to an Acolyte. Several Knights will be selected by Vice Commander to serve as Lieutenants and command a force in battle. Those who prove themselves worthy and beyond all matters of distinction can be granted a special title, as chosen by the Commander and Vice Commander. However this honor, is known to select few.

The training is rigorous and designed for the best, but to those that overcome, and rise above…you can be counted as the elite force, Talon Knights of the Crimson Wings

Guidelines Behind Joining the Crimson Wings

Bloody awesome post Garrett. The art comes across very well. I cannot wait to see what the Talon Knights accomplish.

"What you see is temporal and what you don't see is eternal." 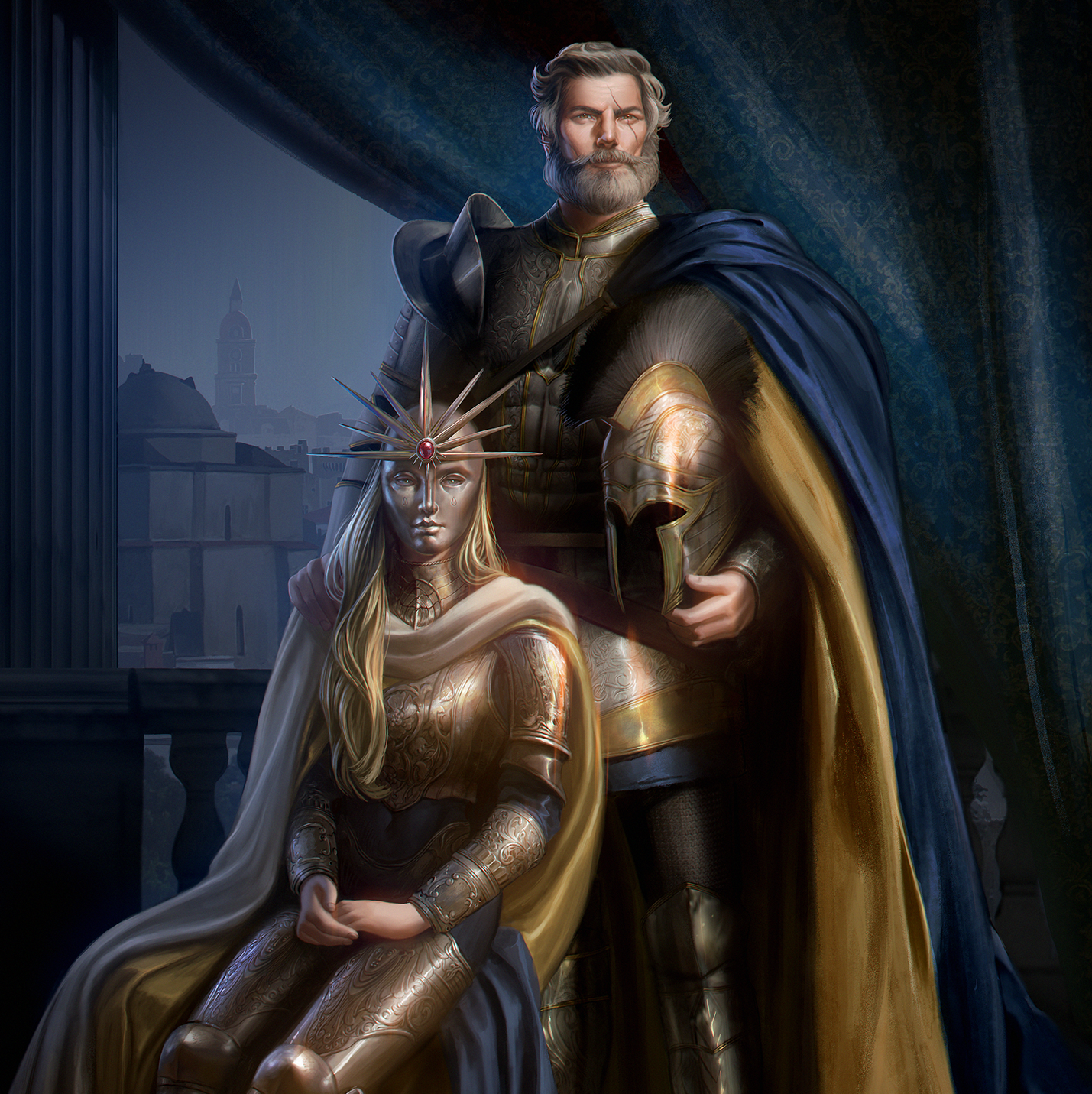 Damn, great visuals and personally love the name of the guild organization (on the down low.) I look forward to working alongside you my friend. And may our county prosper in the ages to come! Clings glass

It's reassuring to know that our county's borders are in safe hands. As always the knights of crimson wings will be the pride and joy of our county.

Looks great! I look forward to supporting your troops with medical aid as necessary.

Great thread! The war trison was a awesome touch!

Great thread! The war trison was a awesome touch!

Thank you! If you're interested in joining our ranks than let me know! You can always reach me through the Discord!

I tremble in fear at the mere thought of what will become of our lord's enemies!

I tremble in fear at the mere thought of what will become of our lord's enemies!

Your words ring true! They will quiver in fear!

As we move ever closer to launch, I'll be relying on your troops more than ever!

Extremely pleased with the commander's decision to promote Asmodaeus to the position of Infantry General - I wish the new general good fortune in keeping our county's borders secure.